Leaving Loreto, I cycled toward El Juncalito as part of my bike tour across Mexico. My destination – A very kind Warmshowers host.

I only had a short day of some fifteen miles to do today, so there was no point in leaving early. After a breakfast of bean burritos, it was a matter of using up the time until midday.

A combination of internet, eating and shopping did the trick ! The road between Loreto and Juncalito was pretty easy, with one minor climb which afforded great views from a Mirador (lookout) over El Chenque Bay and Isla Mestiza. 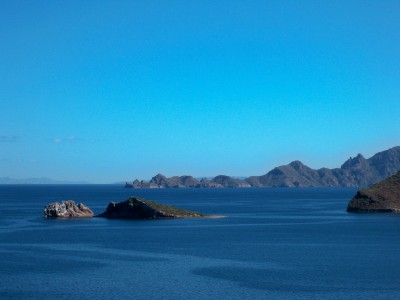 At the turnoff to El Juncalito, I followed the dirt road down into the fishing village, and located the house I was looking for.

The purple and green building belonged to Roberta, a Warmshowers host, and I was soon made to feel at home.

After a great ham, cheese, mustard and tomato roll, I went up to sit on the balcony. Roberta has hung up two water tables which attract dozens of hummingbirds, which I think you can see in the photograph. A

fter a snooze and a shower, Roberta cooked a great dinner, and we had a bit of a chat. I was particularly impressed with her paintings! Roberta has a caravan for Warmshowers guests such as myself to use, where I wrote in the guestbook, wrote my journal, and watched a film on my netbook (The Hangover). 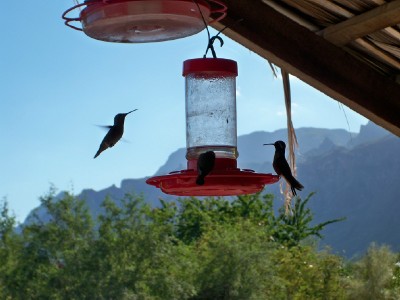