During my Alaska to Argentina bike tour, I spent a month cycling in Colombia. This blog post is from the day's ride between Pasto and El Pedregal.

Up and over the Colombian mountains

Although I gained 600 metres in height over 15 km to reach the high point of the day at 3160 metres, I managed to do it quickly within two hours. 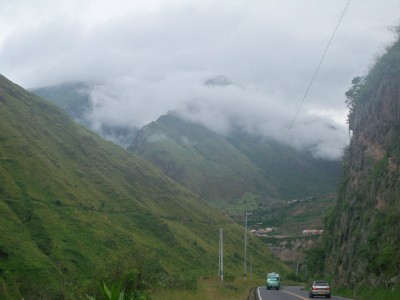 Being a Sunday, there were plenty of other cyclists out, and some struggled more than I did even though they didn’t have all the gear I carry !

At the top of the mountain, I stopped for a coffee and a fried, flat donut thing.

It was quite chilly up there, and as I sat, clouds and mist drew in, so I thought it a good time to try out my new wet weather gear for the descent.

My teeth were chattering with the cold as I hurtled downhill for 20 km, but the gear worked well in the drizzle at any rate!

At 11.00, I cycled into the town of El Pedregal and decided to call it a day before I got caught in the rain. A wise decision, as it rained heavily an hour later. Amazing to think that I now class cycling 45 km with 700 metres in height gain a half day!

Note – It looks like Santos has won the election. Not sure about the figures though… out of a population of 44 million it looks like nearly 14 million voted, which is a HUGE turn out. Unless voting is mandatory.