Today I met other cyclists for the first time when cycling in Alaska. Today's entry covers the journey to the Marion Creek Campground

There you go, thinking you're all special and adventurous cycling down the Dalton Highway, and you see three other cyclists. Not that this deflects from my specialness or adventurousness of course!

The first two that I met were English and Australian who were cycling together, Cass and Dan. They were heading north to Deadhorse, and it seems we must have camped only a few miles apart overnight.

We swapped notes on our respective roads ahead, and after chatting for a while, went on our ways.

The third cyclist I met was a Japanese guy called Koko, and I met him at the end of my days cycling at Marion Creek campground. He was also heading north, and is into year three of his around the world cycling trip. Jealous? Me?

Anyhow, the days cycling wasn't easy, and wasn't tough, but somewhere in the middle. The semi-skimmed of cycling. Joe, the driver who had taken me in the bus to Deadhorse, passed me in the morning and gave me a drink…. Cheers mate !!

A couple of hours later, a random lorry driver coming in the opposite direction also gave me a much welcomed bottle of cold water. Those two acts, combined with the round of applause I received from a minibus full of tourists made the day go well.

I cycled off the Dalton Highway to a small settlement called Wiseman, but after a brief look around, I decided it wasn't all that, and cycled off again. Here's a photo though. 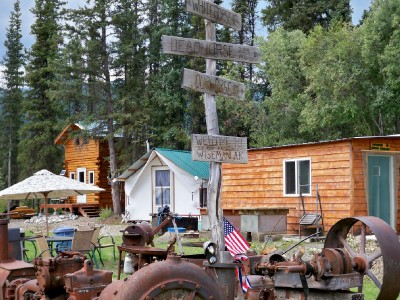 I decided to pull off the Dalton Highway at Marion Creek campground as opposed to going the extra five miles to Coldfoot, and I'm glad that I did. The campground is ideal for the cyclist – It has picnic tables, fire pits an outhouse and a pump for water.

I was so impressed, that I even treated my body to a session with the sponge and water, which is the closest its gotten to having a shower these last five days.

I made a campfire again both to cook with and to keep the mosquitoes away, who for some reason like biting me right on top of my head the little bastards. I talked with Koko quite a bit during the evening.

Use the links below to read more blog posts from this cycling trip:

– Dave Briggs
Dave wrote this travel guide about cycling to Marion Creek Campground when riding in Alaska as part of an 18 month bike touring adventure from Alaska to Argentina.