Last updated on April 23, 2020 By Dave Briggs Leave a Comment

24 hours sunlight, hills, headwinds, and mosquitoes. Such are the joys of cycling in Alaska along the Dalton Highway! Day 3 of my bike tour in Alaska.

Cycling from Galbraith Lake to a random roadside

I got up a bit later today, around 09.00 ish, and my legs felt all the better for it. The beauty of 24 hour sunlight is that it doesn't really matter what time of day you start, because there is always more sunlight left.

As I was sorting breakfast out at Galbraith Lake Alaska, the mosquitoes became more and more irritating, and finally, I had to resort to wearing a head net. I had been warned about the mosquitoes before I set out, and they would be a source of annoyance over the following days.

After breakfast which consisted of oatmeal , (eat whilst hot or it tastes like cats vomit), hot chocolate and tea, I packed the gear away and set off from Galbraith Lake. Right into a headwind. That and the hills were with me for another day.

There was a lot of stopping and starting, and a little bit of shouting, but I eventually made it to Atigun Pass. The angle of the road needs to be seen to be believed, but although it was a tough old slog, I didn't think it was as bad as the road that had led up to it. Cycling the Haul Road in Alaska is certainly challenging!

Finding a random place to stop

Cycling downhill at last, I went on for another ten miles or so, and pulled over into a little truck access passage to a creek. There are a few of these along the Dalton Highway, and they are there so that water trucks can fill up with water should there be a problem with the pipeline.

I set up my tent so that I would be wild camping out of sight of the road, and went down to the creek to filter some water. When I had finished, I turned around, and looking down, I noticed a series of huge bear footprints in the mud. I kept the bear spray handy that night I can tell you. (Yes, really, bear spray. Its like a heavy duty pepper spray). 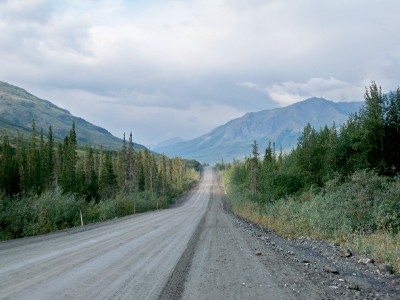 Next day of bike tour