I had been so used to relative flatness when cycling in Mexico, but now it was time for some hills in Chiapas! My bike touring blog update in Mexico.

I had stayed the night in Tapanatepec, and today I would visit Cintalapa. First though, the mountains.

For the first 25 kms, it was all uphill, and I found myself cycling in Chiapas. This region of Mexico has a bad rep, depending on the time of year and what is going on.

As an additional note – I had not problem cycling in Chiapas, and it was a very enjoyable experience.

A small downhill section which led to a plateau where there was 10 kms of flat, and finally, the last 35 kms of rolling hills. 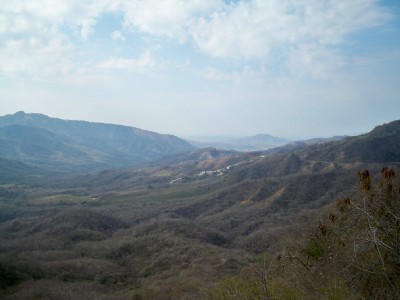 Where to stay in Cintalapa, Mexico

As the gradients weren’t too bad, and I kept most of the height I had gained, it all made for a pretty good ride. I ended up in the town of Cintalapa, which is at about 1000 metres.

The town was more modern than I had pictured it in my mind, but if you plan to visit Cintalapa keep in mind there wasn’t a great choice of places to stay in the centre.

There were two cheapy places where it would have been a great deal of hassle lugging the bike and trailer through someone’s living room to the rooms at the back (yes really), and one overpriced hotel, which is where I ended up.

It was a nice enough room though, and the temperature was pleasingly cool.