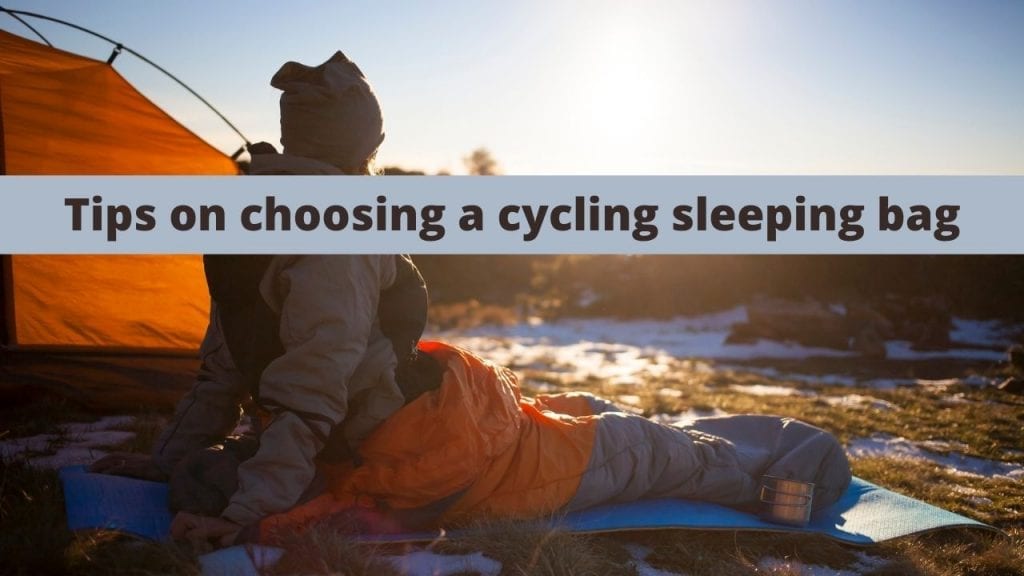 When it comes to picking a bicycle touring sleeping bag there are several factors that come into play. The most important of these are size and weight, as well as the climate in which you will be cycling. In addition, you have the filling type, temperature rating, and general styling.

If you're planning a long distance bicycle tour through various different climates, you might be faced with the impossible task of trying to pick a ‘one type fits all' sleeping bag. You'll soon find out there's no such thing, so what you will end up with is a compromise solution.

On the other hand, if you're preparing for a very specific cycling tour, and you know the weather and climate you'll be expecting, you can buy a sleeping bag more specific to your needs.

This guide aims to give you some food for thought when it comes to buying the best sleeping bag for bicycle touring most suited to your needs. Below, are listed some of the things you might want to take into consideration before buying a sleeping bag for your next tour.

Pack Size and Weight of the Sleeping Bag

When considering almost any piece of kit to take on a bike tour, size and weight are of importance. This is the case when it comes to choosing a bike touring sleeping bag as well.

Ideally, a sleeping bag should pack down small and be able to fit in a front pannier while still leaving room for other items. You'll want it to be as light as possible as well, as you'll be riding with it up every hill from the moment you start your tour until the time you finish!

The only drawbacks to having a lighter sleeping bag with less volume, is that it is either likely to be not as effective in the cold, or it will be effective, but just very expensive!

The sleeping bag I used on my last bicycle tour was a Snugpak Chrysalis 1. It weighed in at 1kg, which is about perfect for bicycle touring, and packed down pretty small, although not as small as I have seen other more expensive sleeping bags pack down to. 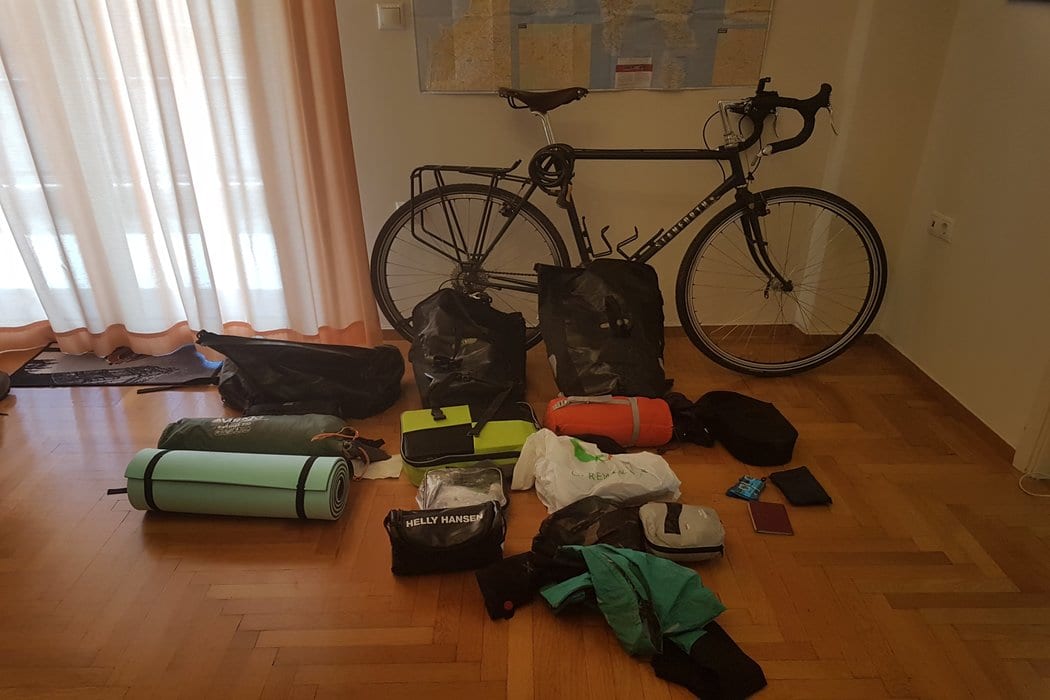 You'll notice that many sleeping bags come with a season rating. As the name would suggest, this is the best type of season they can be expected to be used in. A guide to sleeping bag seasons is shown below. 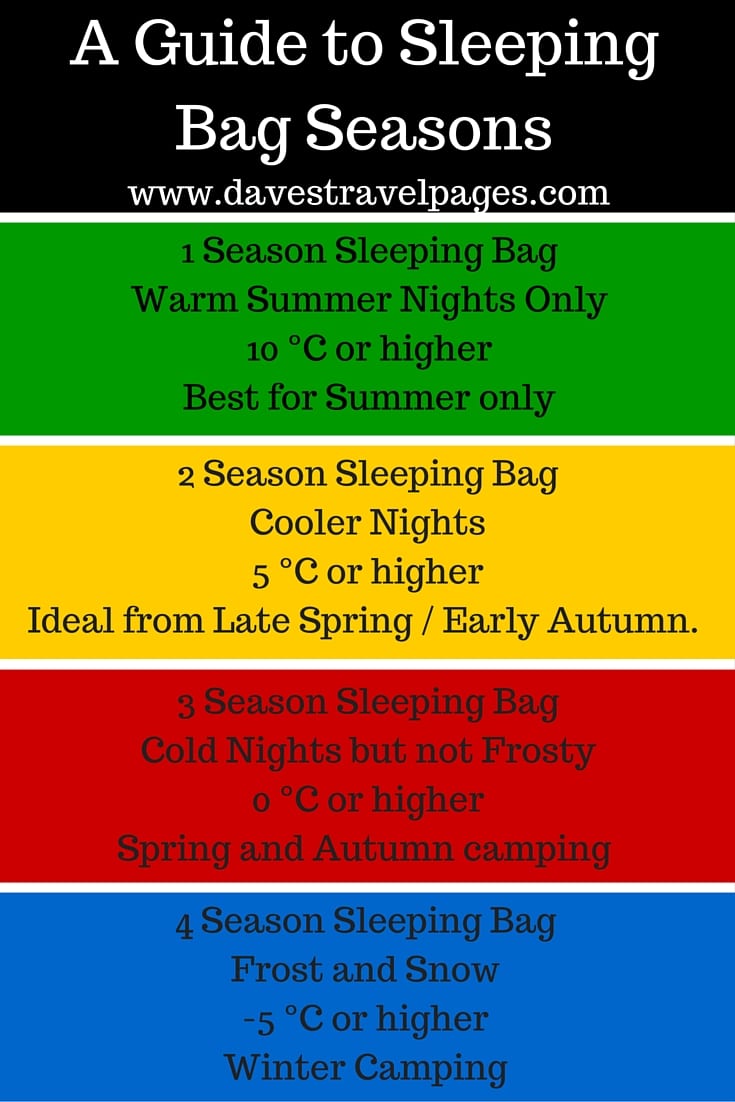 Now, you might be tempted to go for the 4 season sleeping bag for bike touring, with the thinking that this will cover you for all the seasons on your cycling trip.

This might not be the best idea though. A 4 season sleeping bag may be just far too warm in the peak summer months. For example in August in Greece, the last thing you want is a winter sleeping bag!

Have a think about the most likely times of year and countries you will use your cycling sleeping bag, and buy one that is appropriate. Most of the time, a 2 or 3 season sleeping bag is about right.

The Snugpak sleeping bag that I use has a comfort zone of 7°C, which worked great for when I cycled from Greece to England in the late spring/summer months.

Down or Synthetic Filled Sleeping Bags

Although the type of filling your bike touring sleeping bag has may determine its size, weight, and season rating, there is something else to keep in mind – mainly maintenance.

Even if you use a sleeping bag liner (and I strongly suggest you do!), you'll want to wash your sleeping bag from time to time. Down sleeping bags can be a bit temperamental with special care needed. Synthetic filled bags – not quite so much. 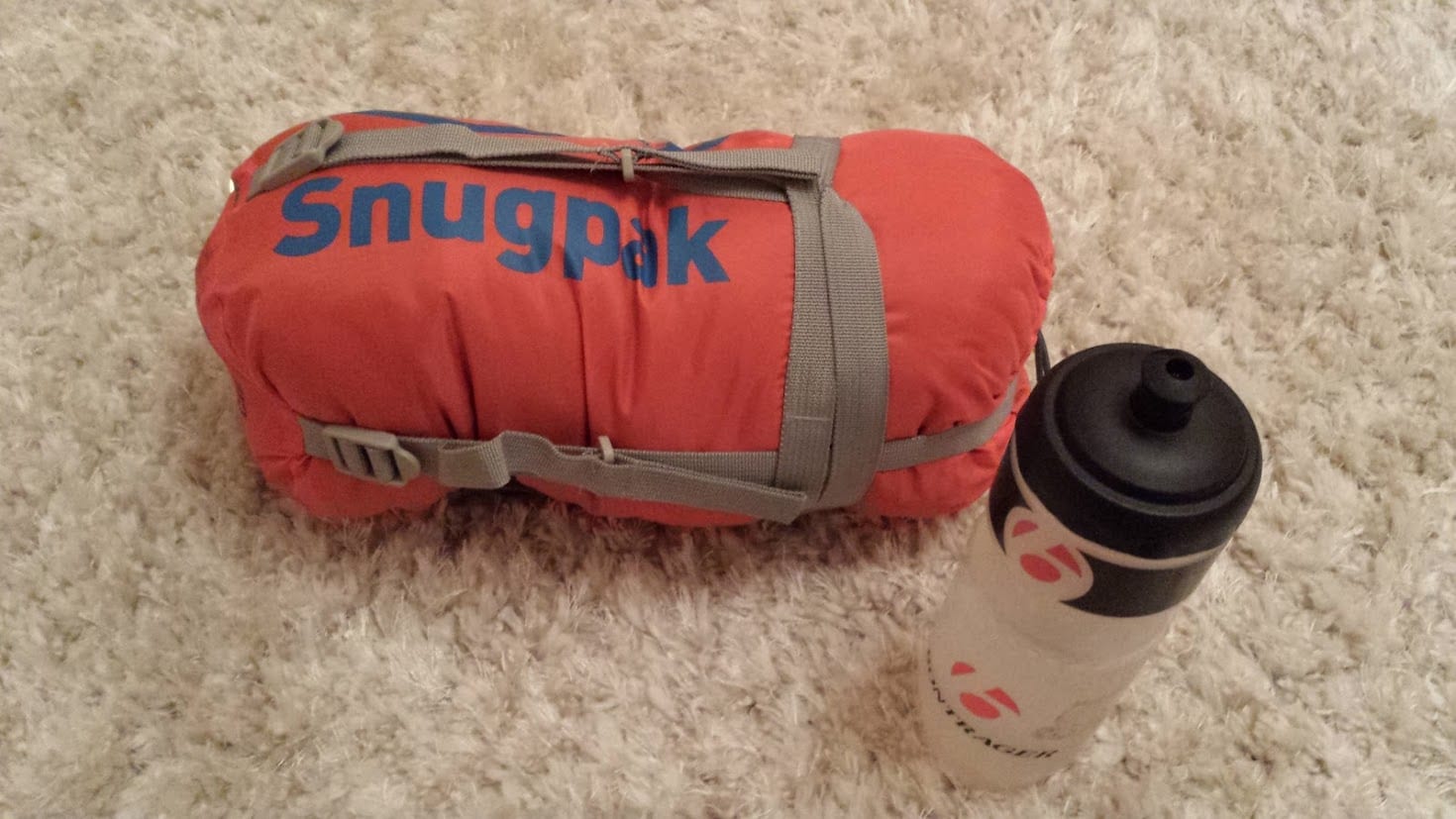 And while you should always try to keep your sleeping bag dry, getting a down bag wet when out on the road can also present problems.

I far prefer synthetic sleeping bags, and would only consider a down bag if I was doing some specialized winter bike touring.

Related: How to Stay Comfortable and Warm Sleeping Outdoors

As if all the above points weren't enough food for thought, there's also the shape and design of the sleeping bag to choose from.

Whatever happens, you'll want one which is of course the right length for your body. You might also want to consider a built in hood/pillow system for the sleeping bag.

While you're here, why not read one of these other cycling trip guides: 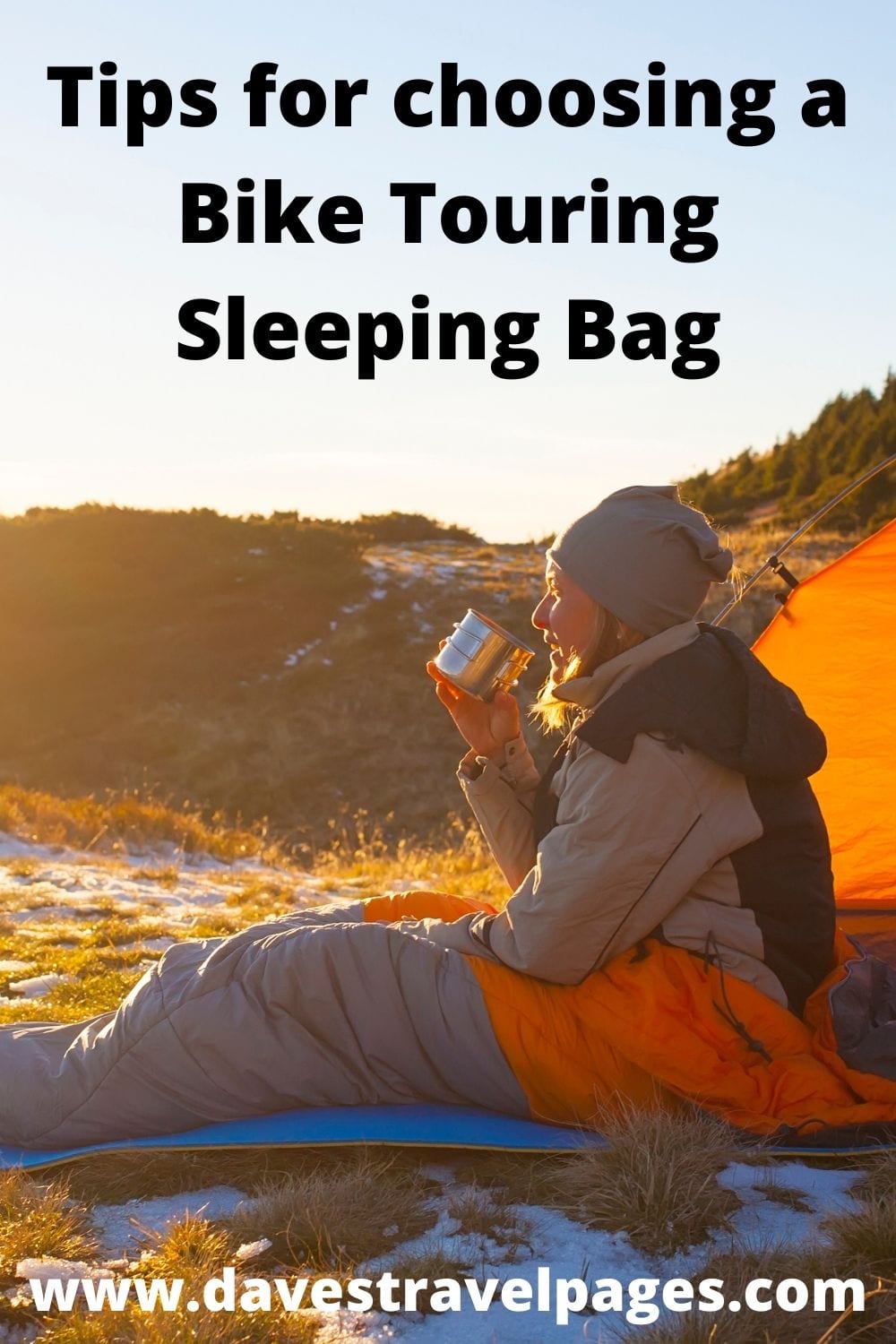 – Dave Briggs
Dave has cycled around much of the world on different bicycle tours. He's biked from Alaska to Argentina, and England to South Africa among many other travel adventures. In addition to these tips on picking the best sleeping bag for bikepacking, he's written many other guides to bike touring.