I cycled through Ecuador as part of my Alaska to Argentina bike tour, writing a blog post a day. This entry, is the day's ride between Valladolid and Zumba.

For some reason, I woke up at 04.30, but felt completely refreshed, and with no aching muscles whatsoever. Far too early to get up however, so I put a film on, and dozed until a more reasonable hour. 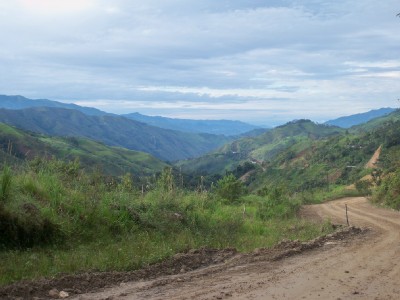 Leaving the hostal at 07.30, it was basically all downhill to the town of Palanda, and the road remained unsealed.

I stopped off for breakfast at a restaurant, and just gone 09.00, it was back on the road once more.

Again, the road remained unsealed, but was in excellent condition, and far better than the previous day.

The first hour went by just fine, but after that came a short, unexpected, 2km uphill section which altered from between 18-20% which was a bit nasty.

After that, the road went up and down, but was all pretty manageable until the last drop and ascent. 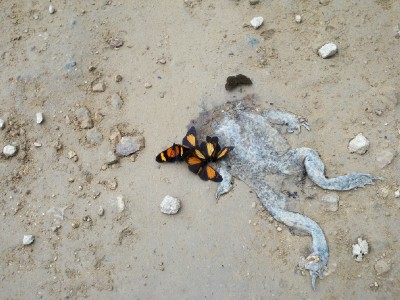 Weirdest photo. Butterflies having a chat on a flat frog. Only at Dave's Travel Pages !

It's all a bit tough on the brakes

By this point, my brakes were making an all too familiar metal on metal grinding sound, where the quality of a 50 cent brake block was all too non evident.

Removing the offending brake block left me with just one on the back, which was about as much use as a chocolate teapot, especially as a huge downhill section then began.

From the town of Bella Vista/Progresso, the road dropped 385 metres in just 5 km. Making matters worse, I could see on the other side of the valley, that  once I had crossed a river, I would be gaining all that height and more back. Not terrific news. 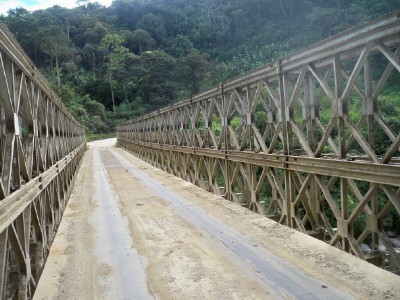 Crossing the bridge at the small town of Isimanchi, it was indeed time to head back on up.

Researching this section, I had been slightly concerned about what wet weather would do to the quality of the roads. As it turned out, what I should have been more concerned about, was cycling up stupidly steep hills in 30 degree heat.

With gradients of between 18 and 20% once more, I was cycling for 100 metres, before stopping for a much needed breather.

Leaning over the handlebars, sweat would drip from my head, leaving interesting patterns on the dust covered tyres and front panniers.

When I was ready to start again, the next challenge was how to get the 65 kilo D-Train moving again from a stationary position on a 20% gradient.

Repeat that a few dozen times, and it explains why I seemed to move no faster than an asthmatic ant with some very heavy shopping.

In fact, I believe that one and a half hours is the slowest I have ever cycled 7km. I did climb over 560 metres in that short distance though, which may explain it somewhat. I believe it was at this point I finally decided that I would never cycle with a trailer again after this trip. 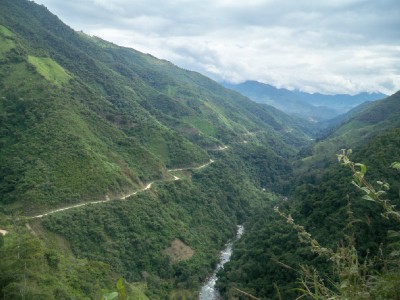 I just cycled up that !! 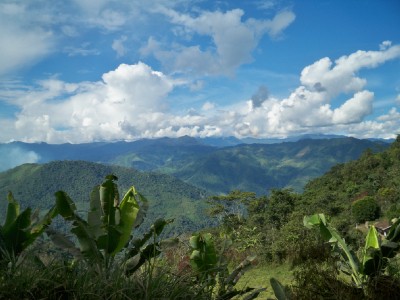 Finally peaking just before the town of Zumba, I glided downhill, and found a suitably cheap at 3.00 dollars a night place to stay.

A cold water shower, but after a day like that, who cared !

It should be a relatively short day in terms of distance tomorrow to just the other side of the Peruvian border, but no less challenging.

The brake block I managed to buy from a small store will have to be fitted in the morning – I am too busy enjoying this cold beer right now !