Last Updated On October 7, 2020 by Dave Briggs Leave a Comment

The route I chose to enter Peru from Ecuador would be a challenging one, as this section of cycling from Vilcabamba to Valladolid certainly proved! 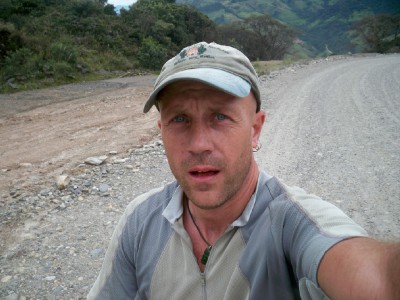 Cycling out of Vilcabamba

The road leading out of Vilcabamba was paved for the first 20 km, although that didn’t make it easy going as I cycled uphill 400 metres over the short distance of 7 km.

In a pattern that was to repeat itself all day, the road then dropped 300 metres over the next 6 kms, before gaining almost the exact same height back over 6 km.

A small 150 metre drop over 3km followed, and I was in the tiny village of Yangana, and just in time, as I was getting a tad peckish !

I found a restaurant, and some guys travelling over from Peru called me over to their table where we all had breakfast.

My Spanish was in pretty good form today, and after talking some about their trip, I found out that they were having a mini-adventure of their own as they headed towards a business meeting on the coast.

It had taken them 3 hours to get across the border as they didn’t have the correct paperwork for their truck, then they had a flat tyre in the middle of nowhere, had been delayed for 4 hours due to roadworks and so on.

They were already a day late for their meeting, and here’s hoping they finally got there ok ! The fine gents that they were, they even paid for my breakfast – Ta very much fellas !

This was the tough bit

After stocking up with snacks, water, and coke I hit the road again.

Now began the start of a dirt track that would take me all the way to the border with Peru.

Of the blogs I had read covering this section, most people were plagued by muddy roads due to rainfall, and had to wild camp as they could not make it to the next town.

Either due to good luck, or good planning (maybe a bit of both!), I had an ideal days cycling weather. Neither raining nor too hot, the temperature was ideal, and the sky clear for some great views. 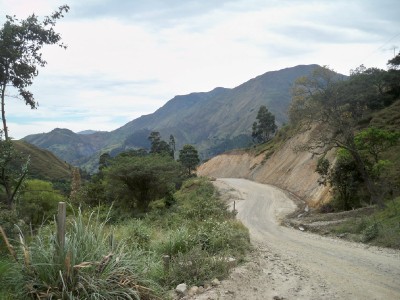 That’s not to say that the day was an easy one though. The initial 6 km climb out of Yangana had me sweating nicely, especially when trying to force the bike up the many 20% gradients.

It may not have been muddy, but that meant that on these super steep sections, my rear wheel would struggle to gain traction, and in some places, I would turn the pedals twice just to stay in the same spot, with the rear wheel spinning on the dust and rocks. 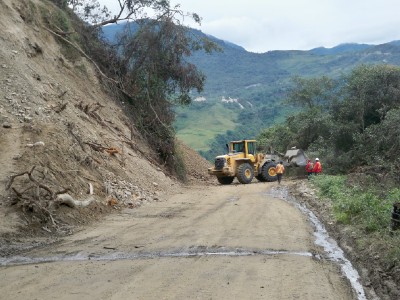 There were the occasional obstacles. 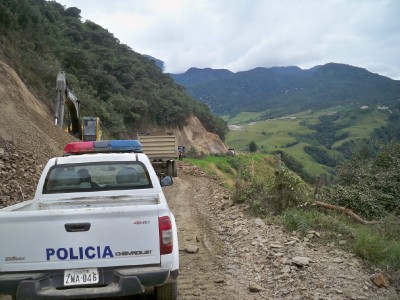 Even the odd traffic jam. 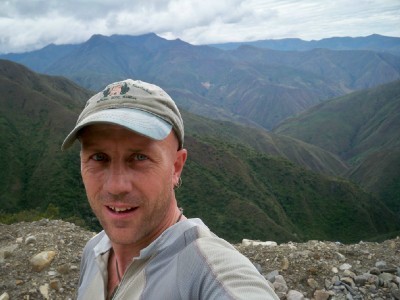 A bit happier there, with the awesome view behind. 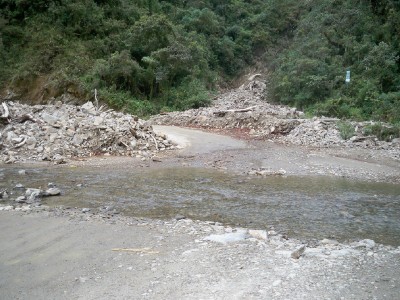 There was even a river crossing or two.

Up and down the day went, and by the time I got to the last downhill section, I had cycled uphill over 2100 metres, which considering the road quality was pretty good going. 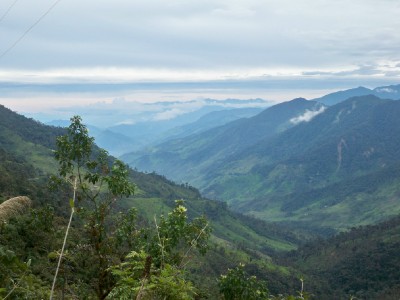 The last downhill section lasted for 14 km, and I dropped nearly 1000 metres over that distance.

Tired, hungry, but ultimately happy, pleased and content with a monumental days cycling with some great scenery, I cycled into the small village of Valladolid, where I was more than pleased to find that there was a hostel of sorts.

The tiny price of 3.50 got me a big room with shared bathroom facilities, and having a nice meal and a couple of beers filled in the evening. With more of the same on the cards for the next day, an early night was in order !