Today, I passed through a strange little town that had some Victorian style buildings called Eureka, before ending up at Burlington campground on the 101.

I don’t know. I spend all that money on a motel room, and get no more than two hours sleep. Brilliant!

Whilst I wasn’t sleeping, I went through all my gear, dispensing with unneeded items, which reduced the weight I carry by two or three kilos.

I also started a claim against British Airways, which I foresee will take months if ever to resolve, and put in a claim for a refund from Condor Airways which I am 50/50 about getting.

Subway for breakfast, and onto the road. The first port of call was the town of Eureka, less than 10 miles down the road. 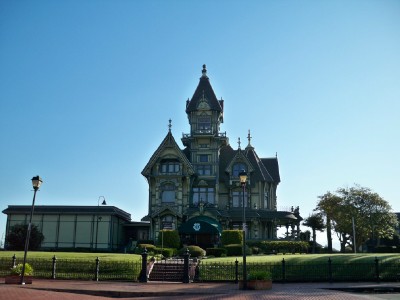 This was a strange little town! Dotted around Eureka were some great Victorian Gothic style buildings (don’t know if that’s actually a real architectural style, but if it isn’t, it should be).

The pacific coast bicycle route took me around the centre of town, and away from the chaos of Highway 101 for a while.

I encountered a huge traffic jam in one industrial area, which must have been a mile long. It turned out that they were all queuing to dispose of their unwanted electrical items.

California has a law that anything with a printed circuit board must be recycled separately from the regular trash. Saturday, and only between the hours of 9 and 2 in this one particular place is evidently when it happens in Eureka.

Now, that’s all well and good, but someone clearly hadn’t thought through what happens when 100 cars sit in a queue that doesn’t move with their engines running. Methinks there should be an engine idling law also.

With Eureka behind me, it was back onto the 101. It was reasonably fast going, but not the most peaceful of rides. Thankfully, it wasn’t long before I could turn onto the Avenue of the Giants.

This is a road which winds its way through the Redwood forests of Humboldt Redwoods State Park. These ancient trees are huge, some over 300 feet tall, and I could feel my energy pick up as I cycled between them.

I called it a day at Burlington Campground, which had one of those nice five dollar hiker/biker sites. I’m going to take the next day off, and do a couple of trail walks.

The 101 is more stressful than I care for it to be right now, and it will be nice to commune with nature for a while. Alert – Tree hugging hippy crap !!