This bike touring blog post was written by Cat as part of her Eurovelo 8 cycling tour across Europe. This entry covers thoughts and impressions of cycling near Split.

Thoughts on camping when cycling

Camping is changing my sleeping schedule. I’ve fallen in a habit of finding a spot around 4pm, setting up and eating something by 5, doing the necessary things like washing and such, then writing and reading until the sun is gone.

By 7 or 8 I’m lying in my sleeping bag, stretching my legs and meditating. Sometime shortly after that I’m asleep. I wake around midnight for a while, then sleep again until daylight wakes me around 5am. 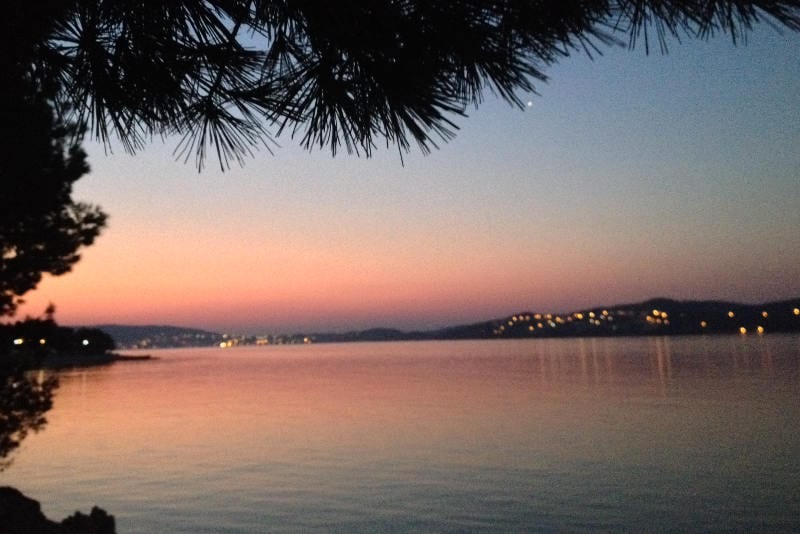 Apparently in the days before electric lights and the industrial revolution, there is ample evidence to suggest that most people went to bed early and woke for an hour or two in the middle of the night, and then slept again. Funny isn’t it.

Anyway, by 6:30am I was cycling around the edge of a cliff, looking out at the rising sun.

I reached Split sometime in the middle morning. It’s the most Western city I’ve seen yet in the Balkans. On my way in I noticed a little sign that said something along the lines of “USAID – City Reconstruction – From the American People”, and a Google search confirms that the USA assisted post-war Croatia with rebuilding cities, developing government systems and a variety of other projects.

While I’m sure the help has been very much appreciated, I did feel that if I were Croatian, I’d feel a little patronised by that sign. The next thing I noticed was the first advertisement for McDonalds since arriving in Montenegro.

Split has wide avenues shaded by big trees, grassy parks, tasteful cream-coloured stone buildings, and a little beach. The streets near the water have the feeling of established success. In contrast, the city also has many apartment blocks in the drab monotonous style of socialist residential architecture.

There were lots of people out enjoying the day, the ubiquitous elderly people leaning on their walking sticks, teens with trendy hairstyles, and attractive young women pushing prams.

As I was leaving the city I stopped at a service station to refill my water bottles and ask directions to get back to the old beachside road. The highway fills my lungs with fumes and trucks going 100km/h drag me sideways with the pull of their tailwind – I don’t like it.

The shop attendant told me that the old road was quite far away, at least 20 minutes by bicycle. I laughed and told him that I am riding to Spain, so 20 minutes isn’t really so far at all. He didn’t believe me until I walked him out and showed him my bicycle all loaded up.

He wanted to know why I was doing it, whether I was scared, and where did I eat. The last question was amusing, as though being a crazy cyclist prevented me from being able to eat at the same places as anyone else.

He insisted that I stay on the highway until I reach Trogir, then go to the old road. He was the second person to recommend that I visit Trogir so I decided to follow his advice.

Trogir is a beautiful example of a Mediterranean town. It has a quaint white-stone old town on a little island, bordered on one side by a bright, sunny marina lined with restaurants and bars, and lush green parks on the other. Beaches are close-by with sand or little white pebbles.

The ocean is an impossibly vibrant blue-green hue that seems to exist only in Croatia, clear as glass, showing details of the ocean floor metres below. All along the main road are houses offering accommodation and signs frequently indicate campgrounds.

After a beer on the marina, I left the town and and cycled on, out of Trogir and through Donji Seget. As the afternoon wore on, I made my way down through one campground until I reached a little beach.

Cycling further led me to a boom-gate, after which a white gravel path wound through what appeared to be a national park. I passed the occasional runner or couple out for a stroll in the afternoon sun. Forest extended as far as I could see on my left and the ocean peeked through the trees about 15 metres away on my right.

Eventually I found a flat grassy space by the water’s edge, sheltered from view of the path by some trees and undisturbed by wind. This was my first night of proper wilderness camping and I had the best sleep in a tent so far.

Camping in Croatia in off-season 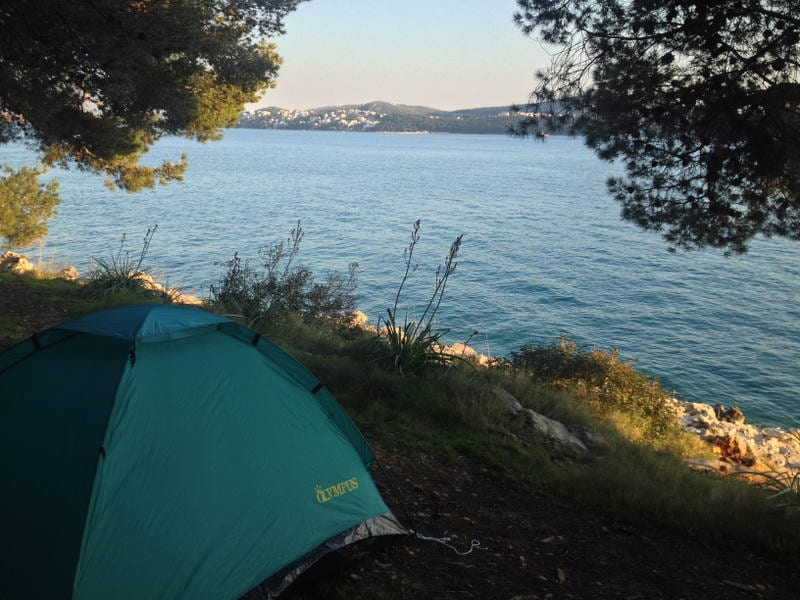 I write this entry lying on my stomach in my tent, facing the ocean as the sun sets. The moon is already brightly hanging in the sky. An aeroplane is drawing a comet’s tail as it falls toward a purple-pink horizon and all I can hear is the waves. 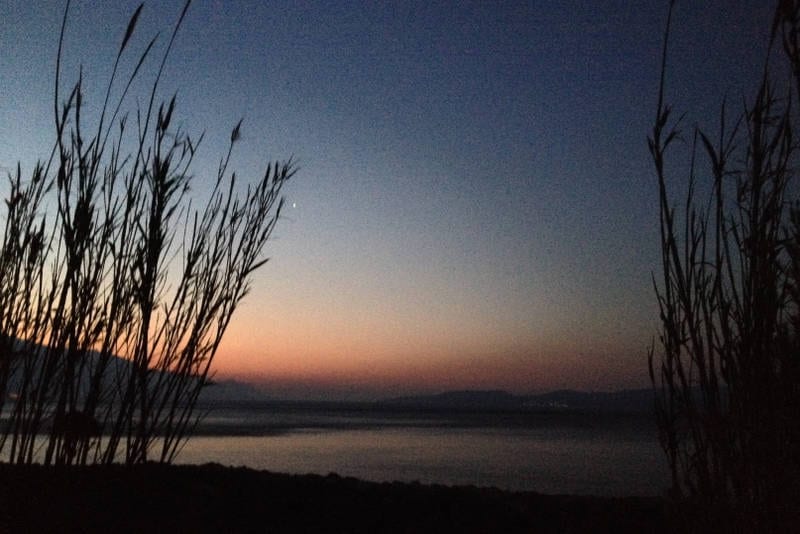 I found another off-season camp-ground down at the beach, just as I was wondering whether it would be possible to wild camp at the waterfront. I can’t access electricity but I do have running water and perfectly flat ground, five star comforts!

It seems to be a common thing, these unattended camp-grounds at this time of year. I’m going to start looking out for them as a free camping option.

More blog posts in this series: