A look at the best bike touring tires from Schwalbe and other brands. A good pair of bicycle touring tyres can last over 10000 kms of cycling! 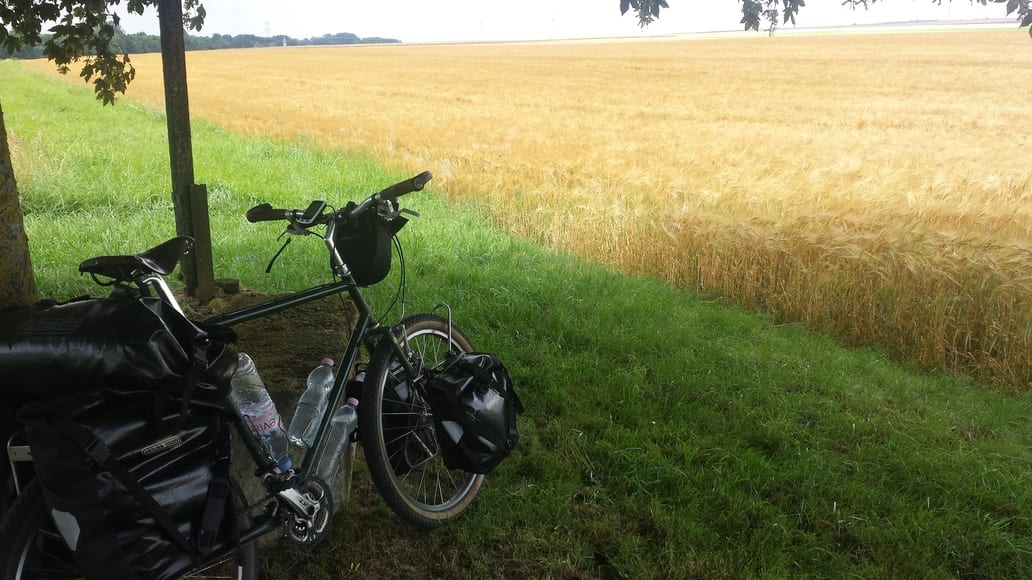 There is a wide variety of bicycle tires to choose from and the bicycle tire you ride may depend on many factors. These are the top-rated bicycle touring tires according to long distance cyclists:

What are the best tires for cycle touring?

I've used Schwalbe Marathon tires for two of my long distance bicycle tours. These were cycling from England to South Africa, and Alaska to Argentina.

I also use Schwalbe tyres for shorter tours and on my day bike. 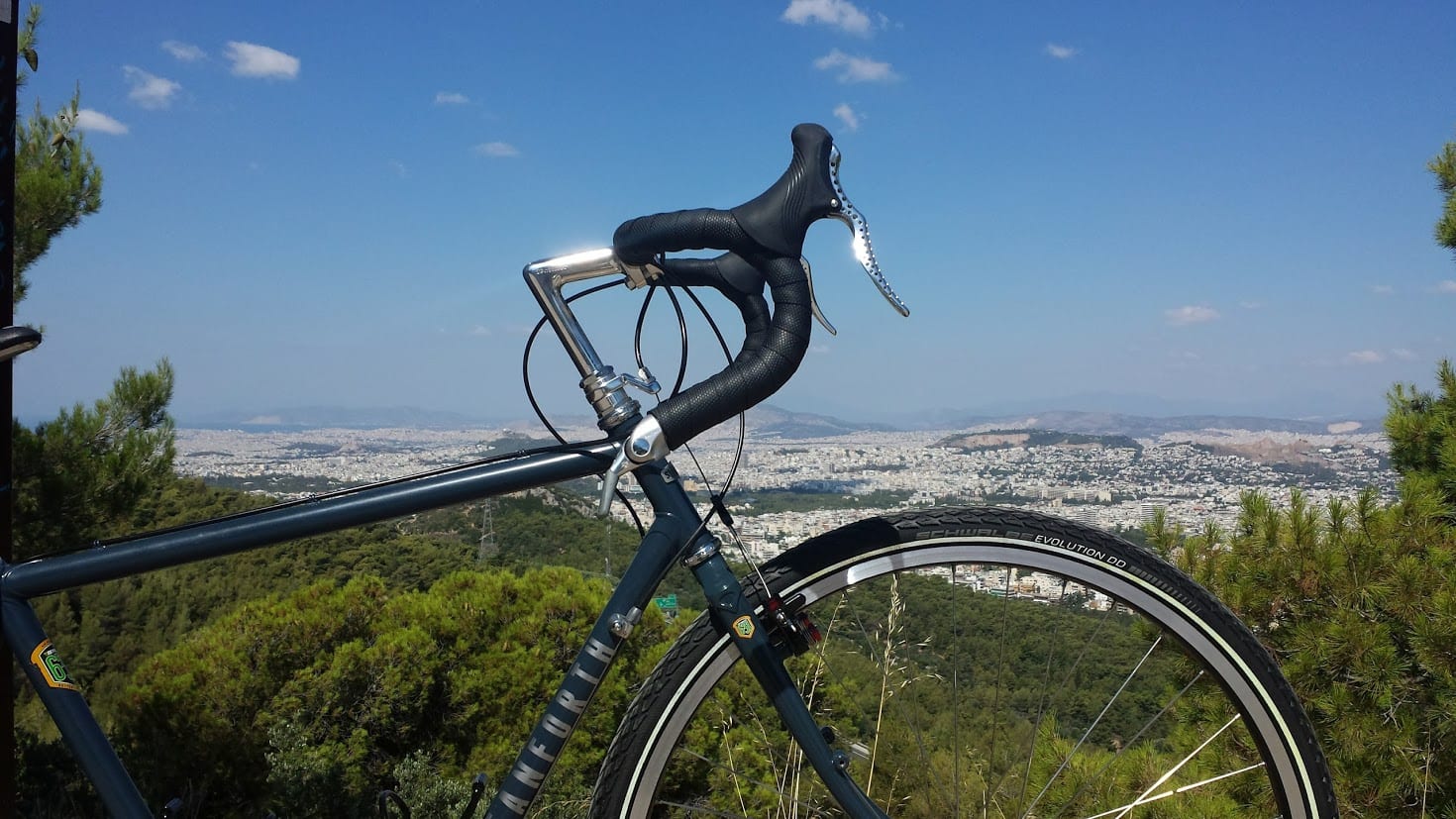 Schwalbe tires have built up a reputation in the bicycle touring community over the years for having the best touring tires. I can add my own review to that, as I find they are long lasting, puncture resistant, and ride well.

Not everyone will agree of course. That's human nature!

Some people complain that Schwalbe Marathon tyres weigh too much for example. That's the price you pay for the extra thick rubber and puncture protection however.

My one complaint about Schwalbe, is that like many companies, they have introduced a somewhat bewildering number of variations to their product lines of touring bicycle tires.

This can make choosing the best bike touring tires a harder task than it needs to be.

Hopefully, this guide will simplify that, and help you navigate through the process of which tires to use on your next bike tour.

If it's already sounding vaguely confusing, and you just want to get on with buying a set of trekking tires for your bike, pick the Schwalbe Marathon Plus tyres. 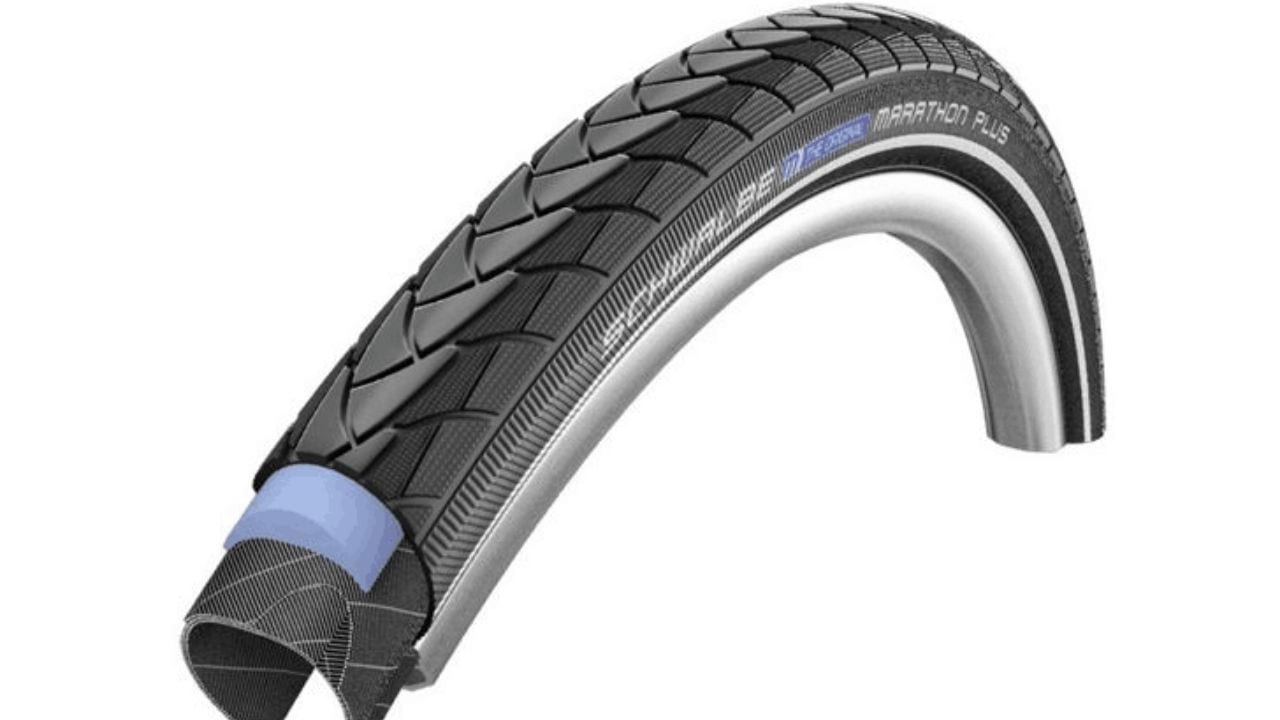 The key features of the Marathon Plus bike touring tires are the 5mm thick Smartguard layer (the puncture protection bit), and the anti-aging sidewall which is designed to prevent cracking when ridden with lower pressure.

With a puncture protection belt 5 mm thick, you are protected from sharp objects. The wired tire is made from premium quality Nylon which offers long-term use and superior performance in extreme weathers.

Providing you swap the rear tire with the front one every month or so when on tour, you may even be able to extend the lifespan of the Schwalbe Marathon Plus tires for longer.

Currently, I am running the Schwalbe Marathon Plus Tour tires on my touring bike. These have a slightly thicker tread than the Marathon Plus tires, and offer more versatility when it comes to dirt road cycling. 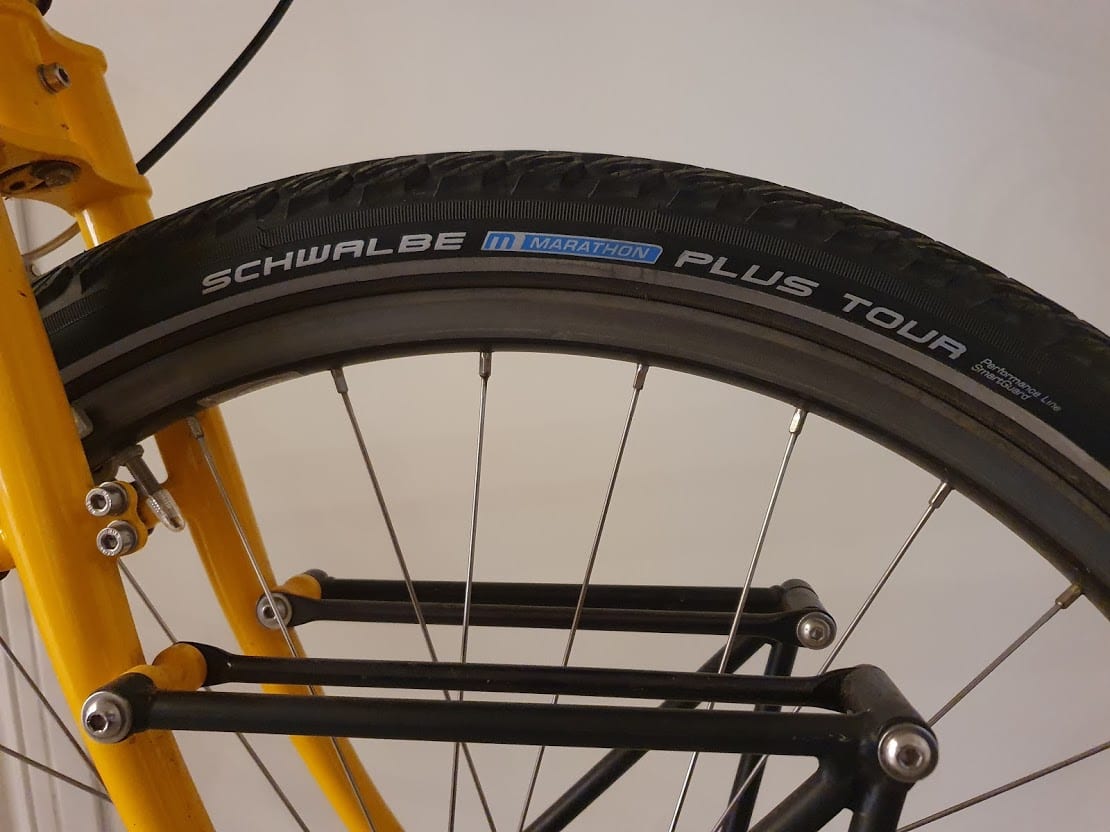 The Marathon Plus Tour tires are heavier than the Marathon Plus, but will last longer. I'm not really cycling for speed, and my current touring bike and gear is based around durability and robustness than getting somewhere fast.

The Schwalbe Marathon Plus Tour tyres might not be for everyone, but are worth considering if you foresee a lot of rough roads and dirt tracks in your bicycle touring future.

When Schwalbe discontinued the legendary XR line of tyres (for no readily explainable reason), the Mondial was hailed as its successor.

The difference between the Mondial and the Plus Tour tires are tread design, the Mondial has a thinner layer of protection against punctures, and the Mondial is lighter.

It's thought that the Mondial will run faster than the Plus range, but it's a hard calculation to make when the weight distribution of a fully loaded touring bike is the biggest factor in speed.

This is a great tyre for bike tours which will take place mostly on sealed roads, but is capable of dirt track riding when needed.

Other Brands of Touring Bike Tires

Schwalbe aren't the only company out there making good touring tires for cycling. When cycling from Greece to England, my bike had a set of Halo Twin Rail 26in Tyres on it. Just one puncture from that trip – 80kms from the final destination!

Continental also have a good selection of tires for bike touring, as do Vittoria, Michelin, Hutchinson and others.

As I've not really tried any of these other tires (apart from the Halo tires), I can't give an opinion on them, Basically, as long as Schwalbe tires keep performing for more, I'm going to stick with them!

Depending on the length of your bicycle tour, and the countries you will be cycling through, you may want to take a spare tire on a bike tour.

Typically, you would do this if cycling through less developed countries where getting hold of new quality tires for your touring bike might be problematic.

I remember when in Africa I had to get new inner tubes and tires shipped out to me in Tanzania. It was VERY expensive! This was because I was riding 700c wheels, and I had found no decent tubes or tires since Sudan quite a few thousand kilometres away.

If I was to do that bike tour again, I might choose to take a spare foldable touring tire with me instead.

I've currently got two Marathon Mondial foldable tires sitting on my shelf for a future long distance bike tour – or as direct replacements for my existing tires. 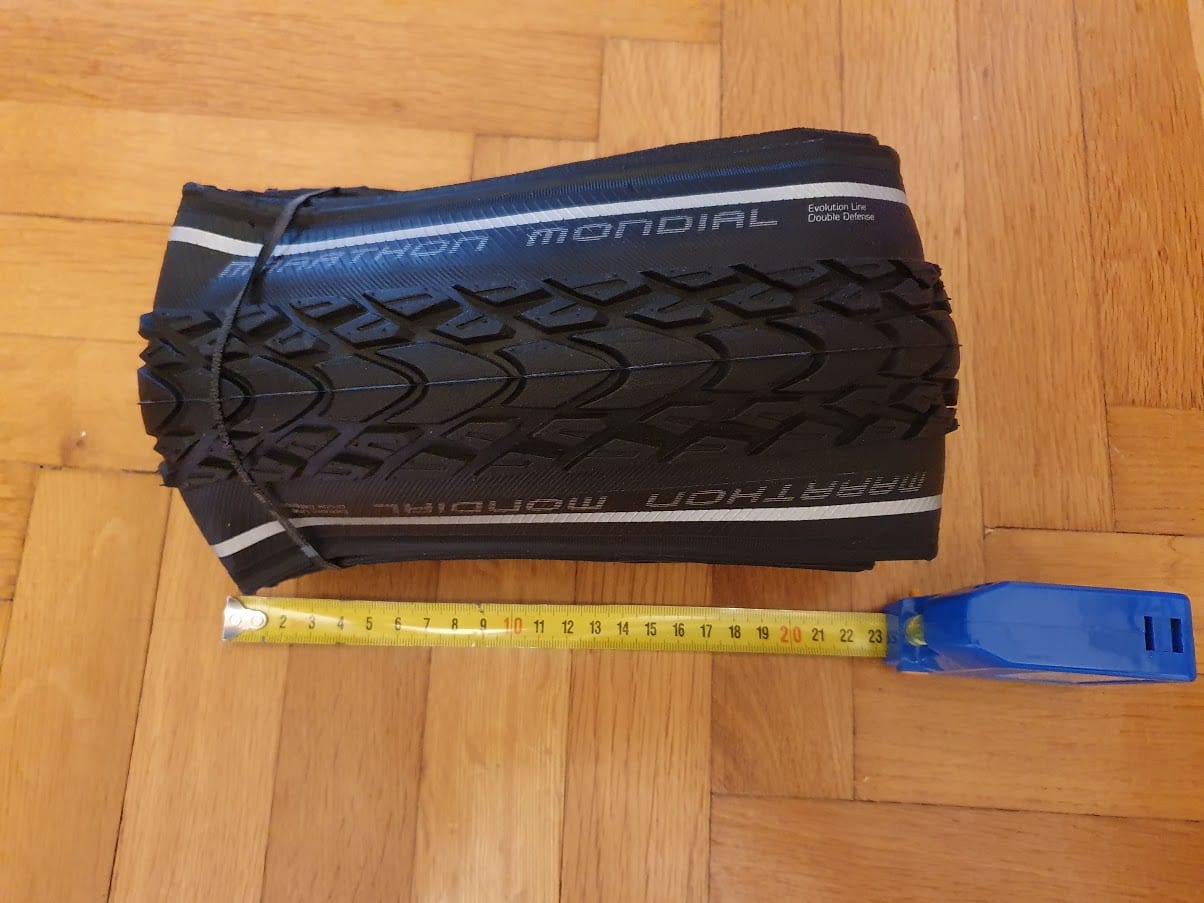 As I've got a 26 inch touring bike, these tires are 26 X 2.00, and have the double defense for added puncture resistance.

This size weighs in at 740g, so if taking a folding tyre as a spare on a bike tour, it's important to remember you'll be carrying this additional weight as you travel by bike.

How to pick the best tires for bike touring

Before you leap in and buy some new bicycle tires before your next tour, there's a few obvious – and perhaps not so obvious – considerations to be aware of.

Ultimately, your choice of bikepacking tire is going to be influenced by the above, and perhaps other, factors.

One last word about price. High quality tyres for bicycle touring are not cheap.

Be prepared to pay a higher price than you might normally for cycling tyres, but also be confident that brands like the Schwalbes will last for thousands of kilometres.

Related: Why it might be hard to pedal your bicycle

FAQ About the Best Bicycle Tires For Touring

Here are some of the most commonly asked questions to do with bicycle touring and the best puncture resistant bike tires:

What is a touring bicycle tire?

Touring bicycle tires are more specifically designed for the rigours of bicycle touring. They have treads that provide traction and grip in a variety of terrains, such as dry, wet, or gravel.

How wide are touring bike tires?

Touring bicycle tires are available in a variety of widths, ranging from as wide as 1.5 inches and up to 2.0 inches wide. The best bicycle touring tire for you depends on your bicycle and the type of bicycle touring that you prefer.

Providing that front and rear tires are rotated every month, the best cycle touring tyres can last anywhere between 10000 kms and 15000 kms.

What is a good bike touring tire?

A good tyre for bicycle tours should be long lasting, have a good tread, a low rolling resistance and be puncture resistant.

What kind of tires do you use for bike touring?

I'd love to hear your thoughts on different types of tire for bikepacking and cycle touring. Leave a comment down below, and let others know your experiences on which tires are best for bicycle touring.

Interested in more guides and reviews about bike touring gear? Check out these other posts:

Please share this guide to the best bicycle touring tires for later. You can find buttons to share with in the bottom right hand corner of the screen. 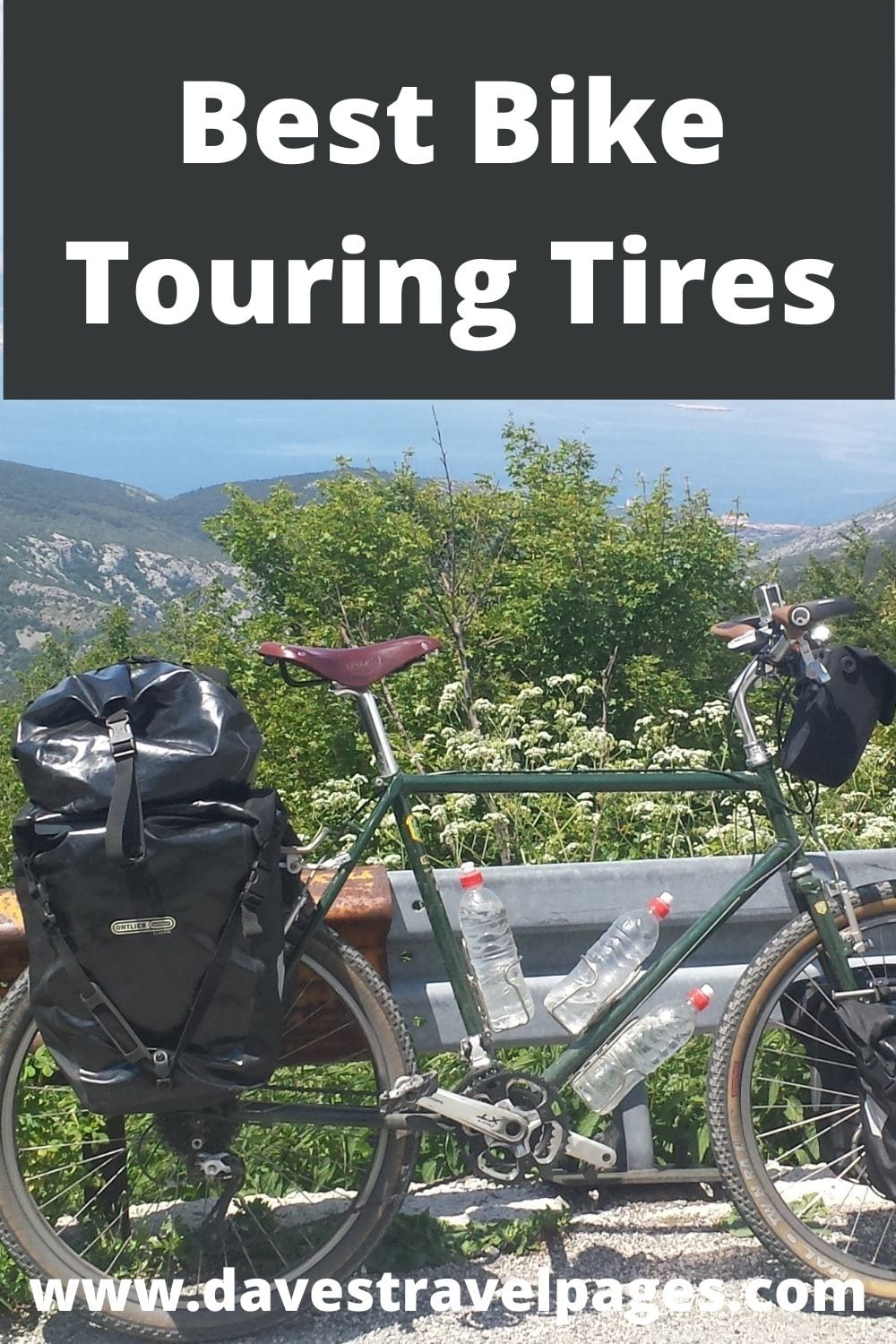