Visiting Albania for a cycling trip? These Albania cycling tips and advice are an interesting read and show you exactly what to expect. 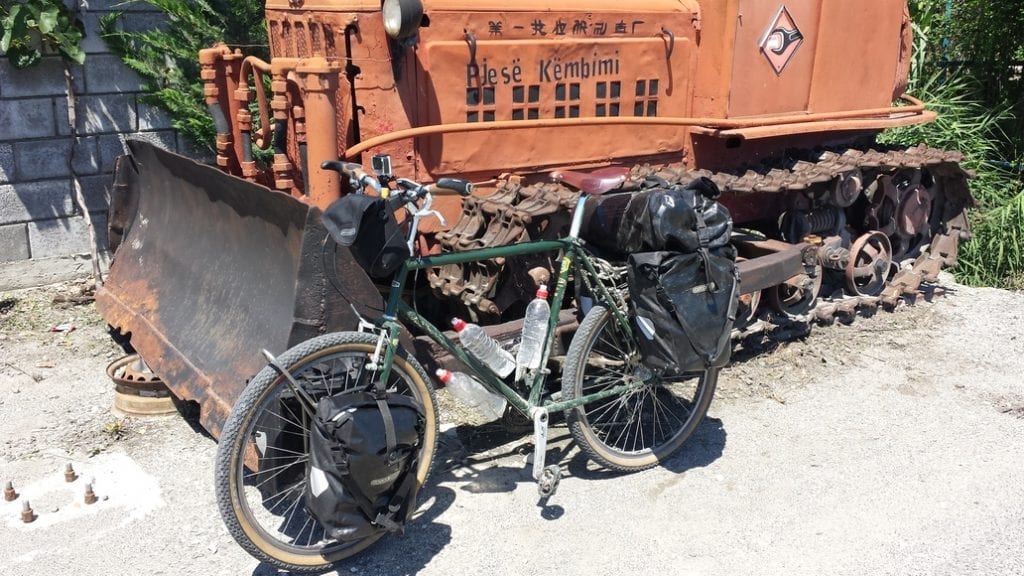 During my 2016 cycling trip from Greece to England, I spent just over a week bicycle touring in Albania.

There's no need to tell me a week cycling in Albania is not long enough – I already know! Don't worry I will return in the future for a couple of months to go bike touring in Albania properly!

In the mean time, I thought I'd share some travel tips for cycling through Albania. This should help you prepare for what to expect when bikepacking in Albania. At the end of this post, there's also my daily YouTube vlogs and other information you might find useful for planning cycling tours in Albania. 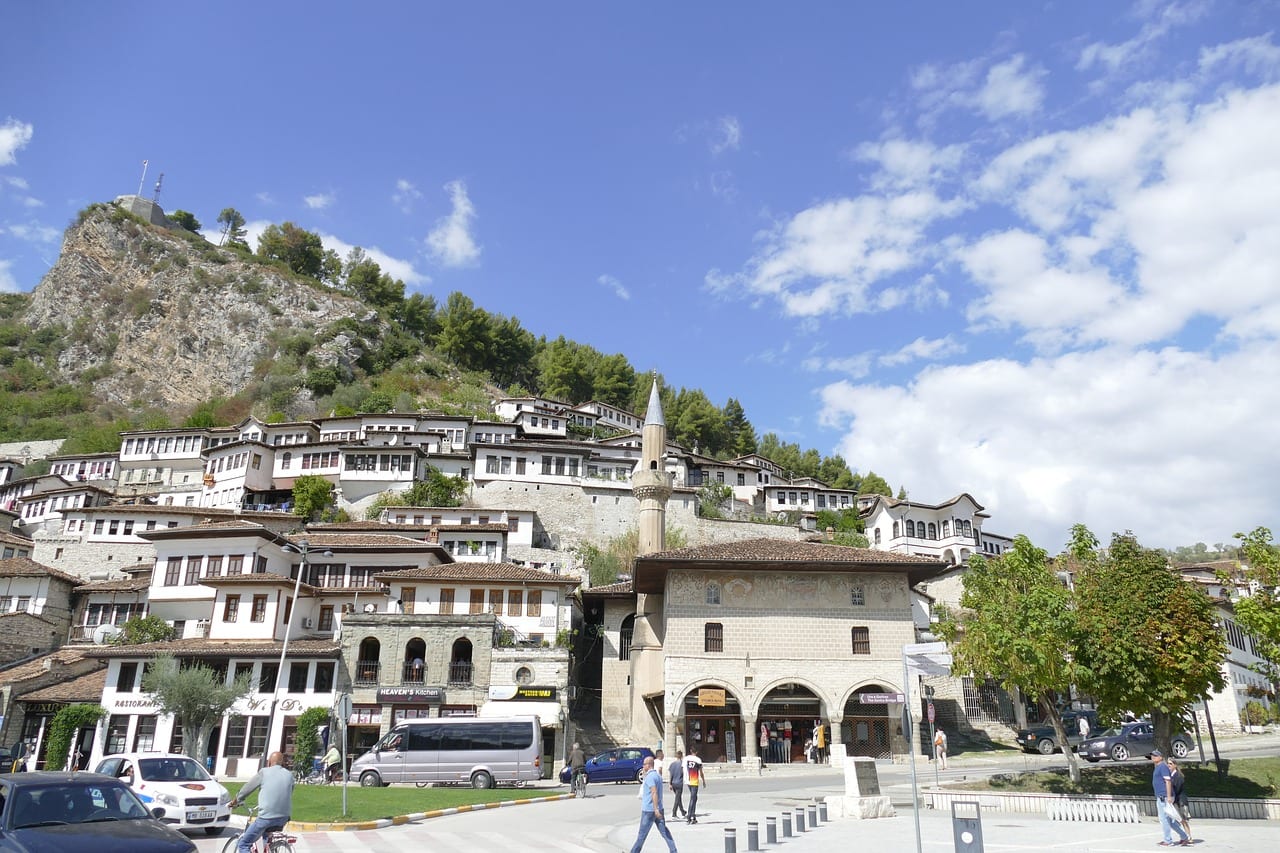 A Brief Intro to Albania

Let's kick off with a quick look at Albania. It's a country many people have heard of, but know little about.

Albania is a small, mountainous Balkan country that is located in Southeastern Europe. The county shares borders with Montenegro to the northwest, Kosovo to the northeast, Macedonia to the east and Greece to the south.

Albania has a rich history and culture and some of the main tourist attractions in Albania include the ancient ruins at Butrint National Park, UNESCO sites like Berat Castle, Gjirokastër Castle, and Lake Ohrid. The Albanian Riviera is growing a reputation as a good place to spend the summer and enjoy the inviting beaches!

After emerging from Communist rule after 1992, Albania has been going through a period of transition. This is still a country in the process of rebuilding itself, so it's a great time to visit and take a self guided bicycle tour not only to see Albania as it is now, but also as it will be in the years ahead. 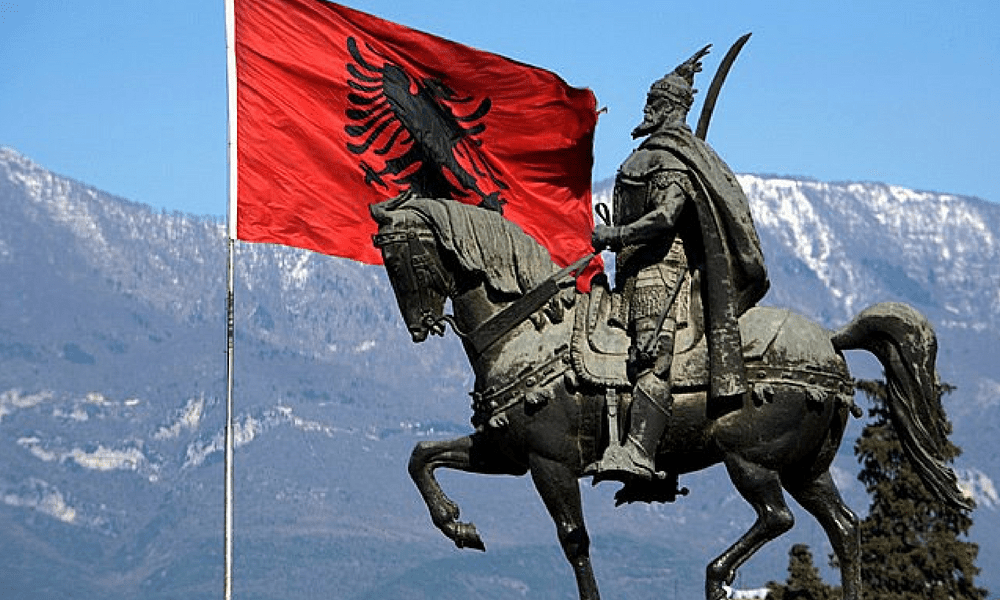 Tips for Bicycle Touring in Albania

Is it safe – I have to say, that I believe Albania is Europe's friendliest country! The people are warm, welcoming, and almost over-the-top in the way they want to treat you. It is hard to put into words, so I encourage you to visit Albania and explore the country by bicycle to see for yourself!

Currency – I toured in 2016, and the Albanian Lekh was pegged at 140 to a Euro. In most big towns, I was able to use either currency. In the small villages though, Lekh are preferred.

How do you get Lekh? There are plenty of ATM machines in Albania to withdraw Lekh from, you can exchange Euros for Lekh, or you can pay in Euros for goods, and have your change back in Lekh.

Credit Cards – Don't expect to be able to use your credit cards everywhere. Some hotels MAY accept them, but don't bank on it (if you will forgive the pun). 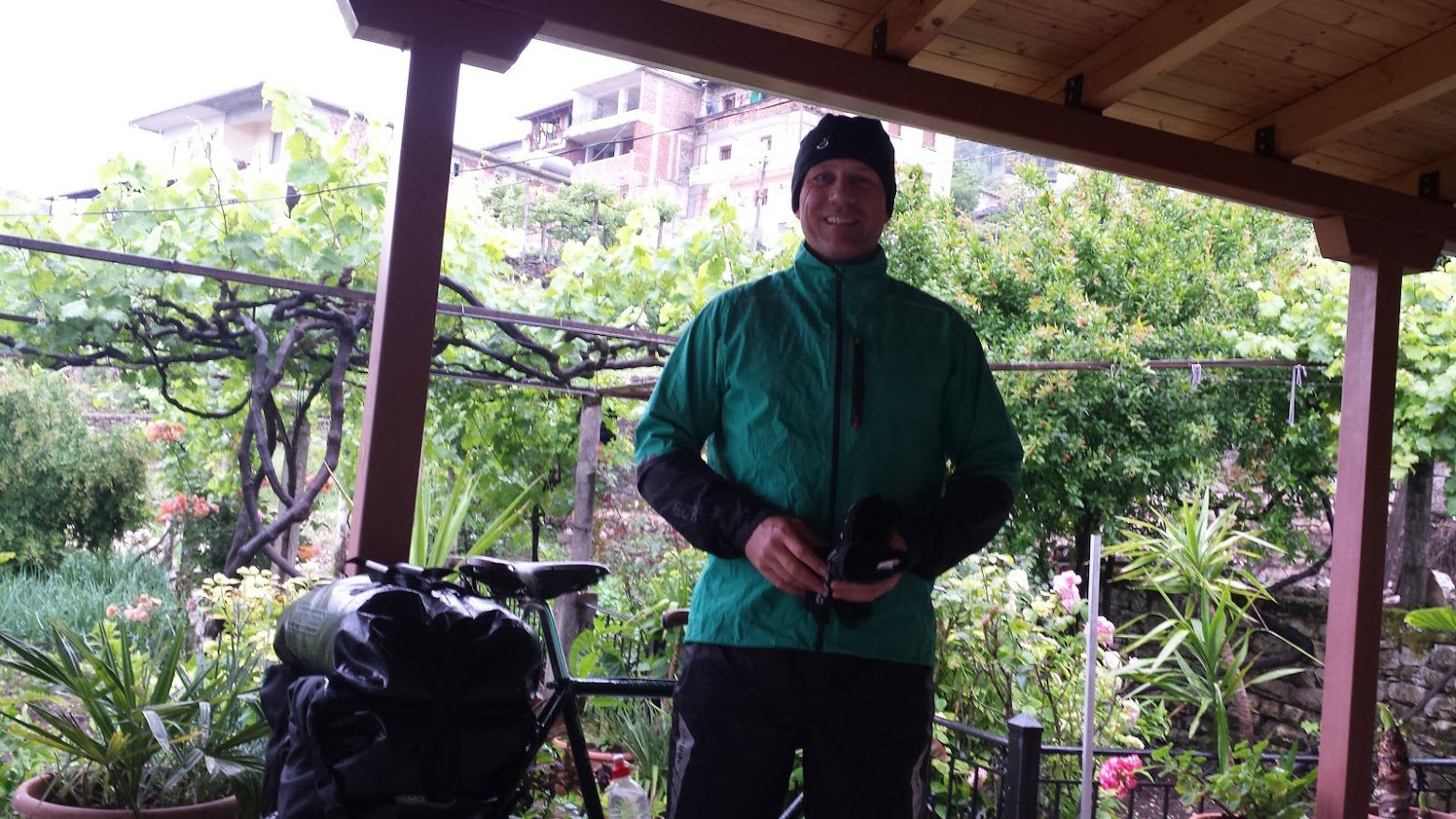 The main highways are all sealed and paved, and most major connecting roads are also sealed. get off the beaten track a little though, and you will find dirt and gravel roads galore, especially up in the mountains.

I would always recommend long distance bicycle touring with 26 inch wheels (take a look at the Stanforth Kibo+ I used for this trip), but you could cycle from one end of Albania to the other on sealed roads on a road bike if you wanted to.

Road Safety – Much has been written about ‘Crazy Albanian driving'. Is it actually that bad though?

If you have just landed from an orderly Northern European country, jumped on your bike, and started pedalling in Tirana, then yes, you will probably think things are chaotic and aggressive.

If you have progressed southwards through the continent and reached Albania on your bike, then no, you will probably not think so. I live in Athens, and personally, I think Albanian driving is a lot saner than Athenian driving!

Accommodation – Although I didn't wild camp myself, there are plenty of opportunities around should you wish. In terms of ‘official' camping, there are a number of campsites scattered around, which were priced at 5 Euros a night per person.

If hotels are your thing, for between 10 and 15 Euro per night, you can get something half decent, and normally with a breakfast.

I should start by saying that I normally do a full write up of my time on the road when I am on a bike tour. On this Greece to England cycle trip though, I started vlogging instead. As a result, you've got a partial bike touring blog post and vlog with commentary!

I think the daily videos (vlogs) are a better record of what happened on a day to day basis during the bike tour through Albania. As the trip went on, they got a little better, so you might find these a bit raw.

Keep in mind I created these bike touring vlogs in Albania each day after finishing riding. They're a bit rough and ready in places, but I hope they give a feel for cycling in Albania. 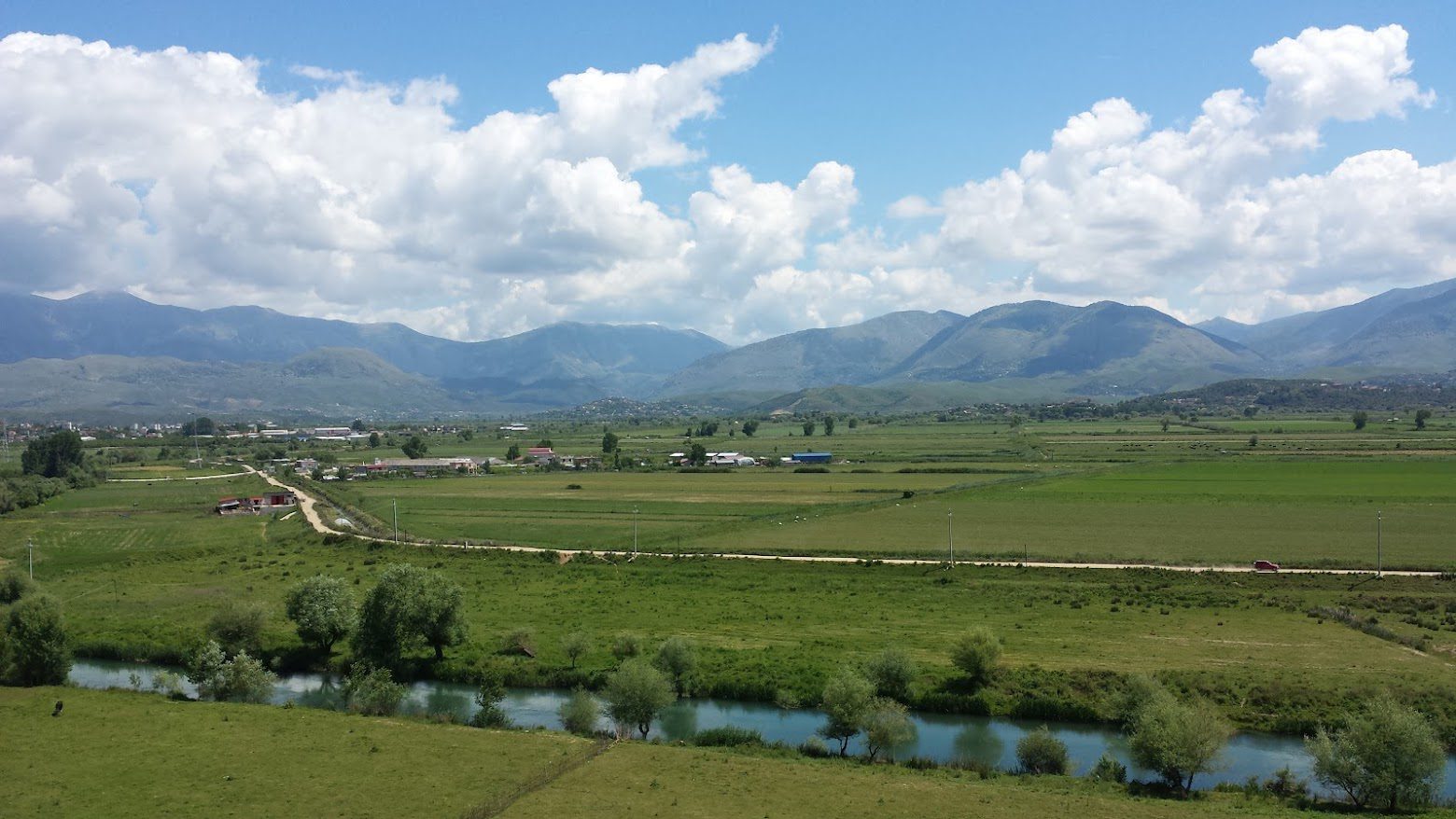 , or plan on bicycle touring in Albania, I strongly recommend you check the vlogs out, as there is tonnes of information there for you!

If you carry on reading to the end of the article, you will also find some useful tips and general information for bicycle touring in Albania. I also have an Albania Travel Guide from a previous trip to the country. This guide to Tirana Tourist Attractions should also be useful.

Wednesday 18th May 2016 Day 11 – Cycling from Ksamil to Gjirokaster

The Albania bike touring vlog below covers the day's ride between Ksamil to Gjirokaster.

As it took a fair bit of effort to get up to the old town section of Gjirokaster, I decided to stay to have a look around! Here's a little video I put together. 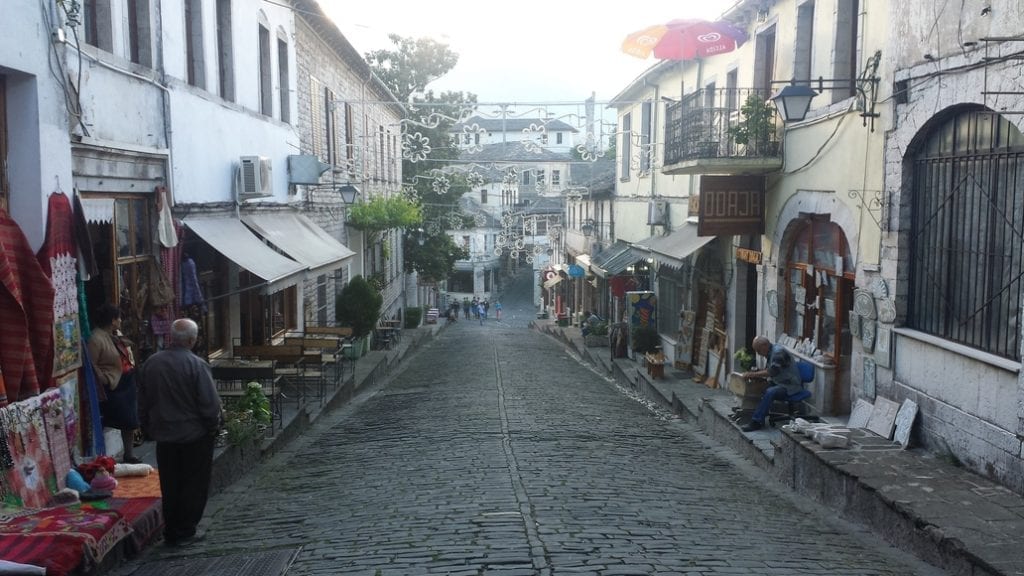 Leaving Gjirokaster in the rain, I cycled to Fier. It was a good test of my rain gear, including Sealskinz Hat! Here's the vlog from the day's ride in.

Cycling from Fier in Albania, I braved the traffic on a a motorway as I headed to Durrës.

Leaving Durrës, I decided to skip out Tirana, and head toward the border with Montenegro. The Albania bicycle touring vlog is below.

My last full day of cycling in Albania. Definitely one of my favourite countries from the Greece to England bike tour, and one I am eager to return to!This vlog covers from Schkoder and into Montenegro. 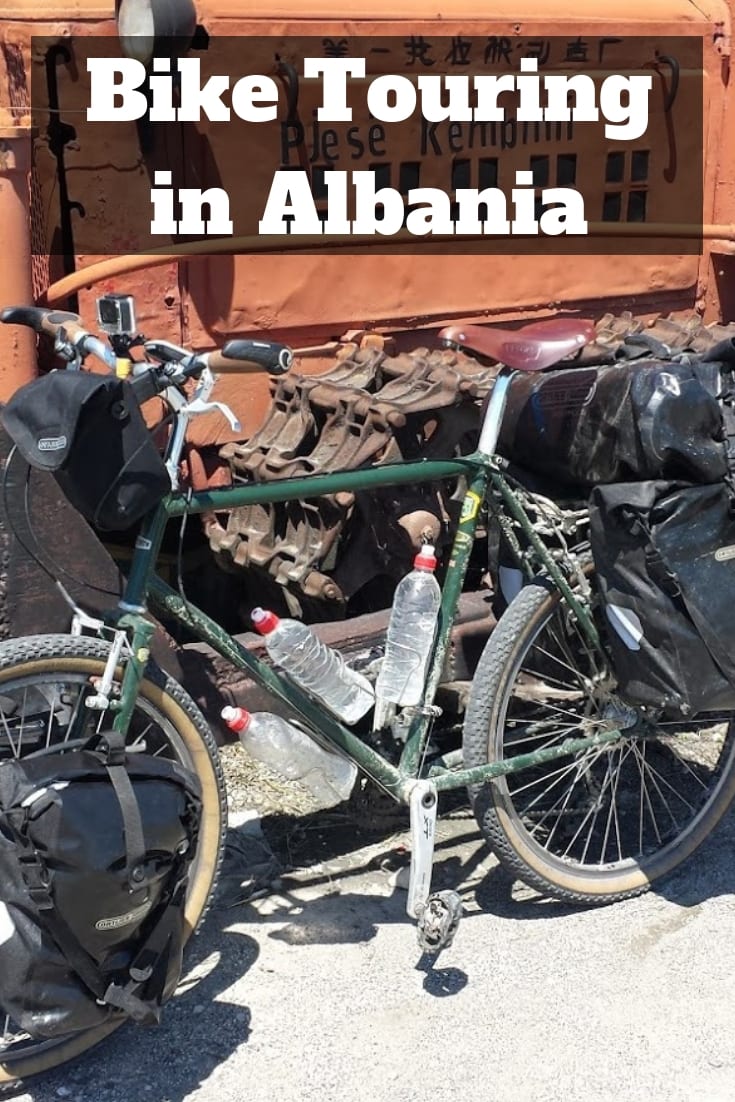 You might find these other articles I have written have useful information for bicycle touring in Albania.