Last Updated On November 29, 2019 by Dave Briggs Leave a Comment

This bike touring blog post from Peru covers the day's ride between Pedro Ruiz and Tingo Viejo. Part of my bike tour from Alaska to Argentina.

This blog post was written in 2010 as part of my Alaska to Argentina bike tour along the Pan-American Highway.

I left Pedro Ruiz at about 08.00, and started cycling on the sealed road towards Chachapoyas. It was drizzling slightly, which it did on and off for the rest of the day until the afternoon downpour.

The road was good quality with only patches of rough stuff where there had either been a mudslide or washout, something that seems to happen regularly in this area of Peru.

The road once more passed through a narrow valley, and the surroundings were stunning. 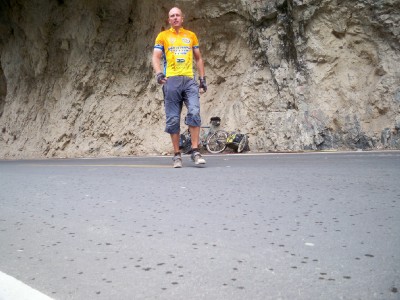 I was trying to take a picture of myself under a limestone overhang, but couldn’t get the camera angle right. What I ended up with was me walking back to the camera, and even whilst walking, I somehow still manage to look like a stuffed mannequin!

Anyhow, the picture is included for April and Lee – yes, I still have the cycling top you kindly gave me! 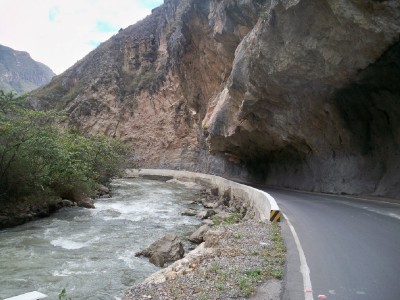 That’s the overhang I was trying to get a photo of with me underneath. Fate clearly decided it would look better without me in the frame!

When I reached the turn off to Tingo Viejo and Leymebamba, I was faced with a choice. Should I continue on to Chachapoyas in order to try and get a map of Peru, or just go straight to Tingo and Kuelap?

If I went to Chachapoyas, it would mean backtracking the next day, which is something I try to avoid, so I decided to turn off for Tingo Viejo. I haven’t needed a map so far, so a few more days without one shouldn’t hurt !

Leaving the sealed road behind, I descended on a dirt track which in a change of form, was actually in really good condition. Bottoming out a few km later, the dirt road then led through another valley, with the river flowing close by. 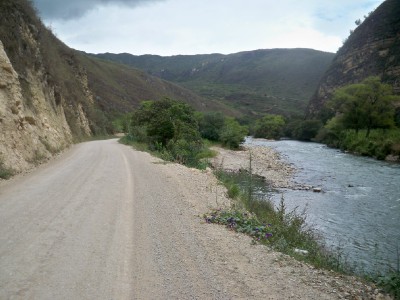 Cycling through a quiet valley along a dirt track towards an ancient archaeological site, with the river running close by, parakeet calls in the air, and butterflies floating by really is what cycle touring is all about.

Ten minutes after having that thought, however,  nature decided to test my idealism by throwing rather a lot of rain in my direction, turning the good dirt track, into a very muddy one.

The bike, trailer, and myself were soon covered in muddy crap as I plodded on towards Tingo Viejo, although my spirits were still high, and I was feeling good.

Tingo Viejo is a tiny village, the result of half of it being washed away in a landslide some years ago. There were two hospedejes to choose from, and at 10 soles a night, my choice was a nice bargain.

Its quite a ramshackle place, with its creaking floorboards, leaking roof, wobbling banisters and dodgy wiring, but its all in a good way.

It rained for the rest of the afternoon, and according to locals it rains a lot here, so my intended walk to the archaeological site of Kuelap tomorrow could turn out to be quite a moist one. 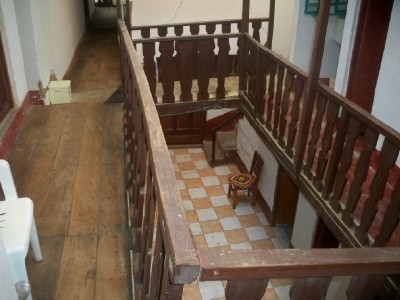