Today was the last significant day cycling of my bike tour from Alaska to Argentina. Here's my travel blog post from the day.

A death-defying night in the tent

Well, I set up the tent in a desert the previous night, and woke up in a swamp.

I am normally pretty good at predicting when bad weather will come in, which is due in part to living outdoors for so long, however last night I hadn’t a clue about what was going to unleash on me.

It started at around midnight and kept up for four hours. Huge slashes of lightening and massive claps of thunder in combination with torrential rain.

The tent actually stood up pretty well to what was hitting it, and I didn’t have any leakages from the top. The problem was though, that the previously bone hard and dry ground was not letting water soak through, and began collecting puddles, and then lakes.

No matter what the tent, if it is floating on top of water it will soon let water in through the bottom. After an hour, I knew that this was going to be bad news.

No choice then, but to pack everything away into my bags, and get into my waterproof clothes. I then spent the rest of the night either sitting or laying across my Bob Yak bag and panniers. As you might be able to imagine, not a great deal of sleep was gained this way.

I woke up in a swamp

The storm eventually stopped at about four or five in the morning, but the groundwater stayed. I stayed on the bags and in the tent until about 08.30 hoping that the ground water would clear, but unfortunately it never did.

This meant that when I stepped out of the tent, I was straight into a lake of water about two inches deep. In addition, the ground underneath had turned to a thick mud, and so I was slopping through it as I tried to move around. Perfect. 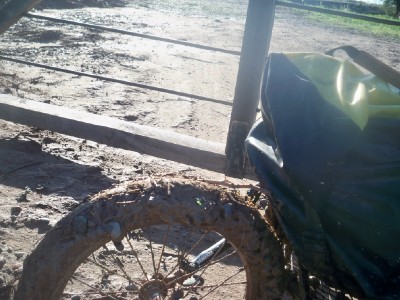 I got my gear onto the bike, and then had a look at the tent. I collapsed it, but there was no way that I would have been able to pack it away without getting everything covered in mud. In addition, obviously it was now completely soaked through due to being in the water.

So, as this was my last day of cycling, I decided to abandon it to nature, as it would not be needed again. If anyone needs a tent or pegs, you will find it behind a radio mast on the Ruta 40 about 20 kms out from Media Agua!!

Pushing the bike over to the road was fun, as it was gathering tonnes of mud as I did so. Considering that it was only 100 metres or so to the roadside it was soon covered in thick sticky mud.

Now the cycling can actually start

Eventually out onto the road, I met another cyclist coming in my direction. He was a German guy, who’s name I never quite got. He was staying at a hotel in Media Agua, which I had decided against… a bit of a bad choice in hindsight! We cycled for a little but when I pulled over to fill up with water from a police check point, he carried on, and I never did catch him up again.

I carried on along the road, which was quite dull apart from one section, where there were a number of floods. These were pretty deep at knee high in the highest places. This went on for a kilometre or more. I suppose I could have got a lift, but that kind of goes against my whole ethos, and so instead I cycled through them.

On the other side, I met a French cyclist Jean-Claude who had perhaps more wisely gotten a lift through the floods. We stopped of at a restaurant for a snack, and then continued cycling towards Mendoza together. 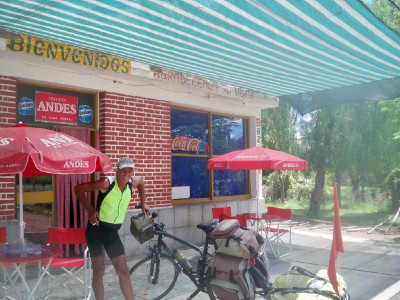 There was some initial big city confusion, but we soon found a great hostel called Sosahaus which had a good price for its dorms. It is quite a relaxed place, and seems a good place to base myself for a few days before I get the bus to Buenos Aries.

At night, a few beers and a little wine was consumed!