My destination on this day of cycling in Alaska was the Alaskan Stoves Campground in Tok. In Tok, I wanted to resupply for the road ahead and the border crossing into Canada.

I should really make more accurate notes of where I stay! Anyhow, today's ride was just a short 24 miles to Tok.

I wasn't in a rush today, because I only had 24 miles bicycling until Tok, my destination. I had breakfast with Chris (the campsite owner) and some friends she had over visiting who didn't seem to mind a smelly cyclist sharing their table.

It was raining pretty good, and had been during the night as well, so the trick was to pack everything away so that what wasn't already wet didn't become that way.

I've been doing these sort of things for a few years now, so I've got a good routine. The only slight hitch is in packing away the tent, because although the inside is dry when it is erect (he he I said erect), the process of rolling it up makes the outer come in contact with the inner, which makes it wet.

If its just an isolated day or night of rain, then its fine, because it gets a chance to dry out, but any longer, and everything I own will become damp despite being careful.

As it was, the two and a bit hours cycling with a trailer was only through light rain, which died off towards the end, although the day was overcast in general.

On reaching Tok, I went to the visitor information centre to check a few things out, stocked up for three days at a grocery store, and went to the cheapest campsite in town – The Alaskan Stoves campground – which for 10 dollars had showers for free.

(Observation from 2021 – I checked the price out of curiosity, and the price is about 18 dollars now for camping. Damn, that's some inflation!)

The site itself was next to a small airfield, and I hoped that one of the planes did not overshoot the runway. 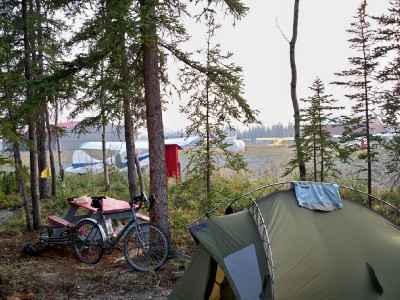 For more blog posts from this tour, please use the links below:

– Dave Briggs
Dave wrote this travel guide about staying at Alaska Stoves Campground when bicycle touring from Alaska to Argentina.