Last updated on April 21, 2020 By Dave Briggs Leave a Comment

This was a 100 mile cycling day, although I seem to have not noted where I started or stayed at night! Must pay more attention! Part of my bike tour through Alaska.

A 100 mile day Cycling in Alaska

Although the wind wasn't actively in my favour, at least it wasn't blowing deliberately against me, so perhaps the God of Cycling was listening to me after all.

Another hot day, and also a long one of just under 100 miles cycled, but the road was good, and I'd stocked up with plenty of snacks (skittles, starburst, payday – all healthy stuff). I tend to stop every hour for five minutes or so to eat and drink, and after four or five hours I take a half hour break.

I finally reached somewhere to camp just 24 miles short of Tok, which claims it is an RV park, but is in effect somebody's back garden. That said, there is a new shower block that I can not afford to use, because I decided to invest some money in a big breakfast for tomorrow morning.

Thoughts from the day

Tomorrow will be a short days cycle to Tok where I'll resupply and get ready to cross the border with Canada.

Listening to the MP3 player during some of the last hours of cycling, I'd forgotten just how good Helloween – Keeper of the Seven Keys is.

Am currently alternating between not wearing and wearing my knee brace during the day. My knee is vastly improved, although still far from perfect (unlike the rest of me). 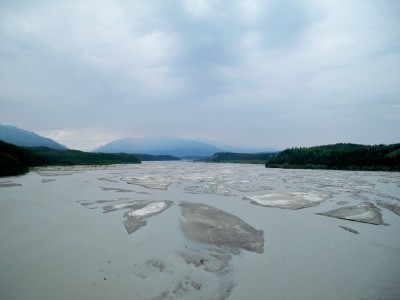