Cycling through Canada, I left Dease River Crossing and headed down the road toward Lion Camp. Along the way I filled my camping stove fuel bottle and stocked up on groceries.

A good move being under the shelter, as it meant that the rain which fell during the night affected me not at all. It was a bit chilly though, apparently dropping to 2 degrees in the night. 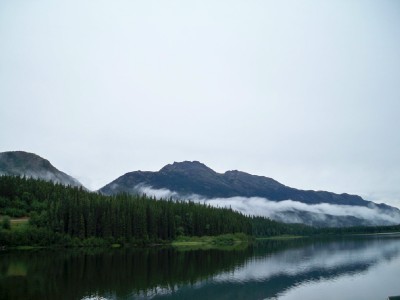 Although a little overcast, it was good cycling weather, and another enjoyable days ride. Even the 20 kms of roadworks didn't seem too bad. My destination of Dease Lake, was a town so small that I almost cycled through it without noticing.

I stocked up in the grocery store, and also filled my fuel bottle for the camping stove at the gas station, which set me back a massive 76 cents.

According to the woman in the Northern Bear gift shop, which also doubled as tourist information, the people who owned the RV park in town do not like cyclists, so I decided to give it a miss, as the whole ‘town' was a bit depressing anyhow.

There was another campground 10 kms away, the Lions campground on the Tanzilla River, which was 10 bucks.

Now, I find myself in an odd position in places like this. From a purely financial point of view, I should be free camping along this section. However, what I then miss out on, is the conversation with other people, their stories, advice about the road ahead, and of course, the occasional freeby!!

Here's some more blog posts from this cycle trip: