Whether you are planning your first bike tour, or are a seasoned RTW cyclist, these cycling tips for staying safe on the road when bike touring should prove useful. From how to avoid being ‘doored’, to what to do when faced with a pack of vicious dogs, I’ve got you covered! 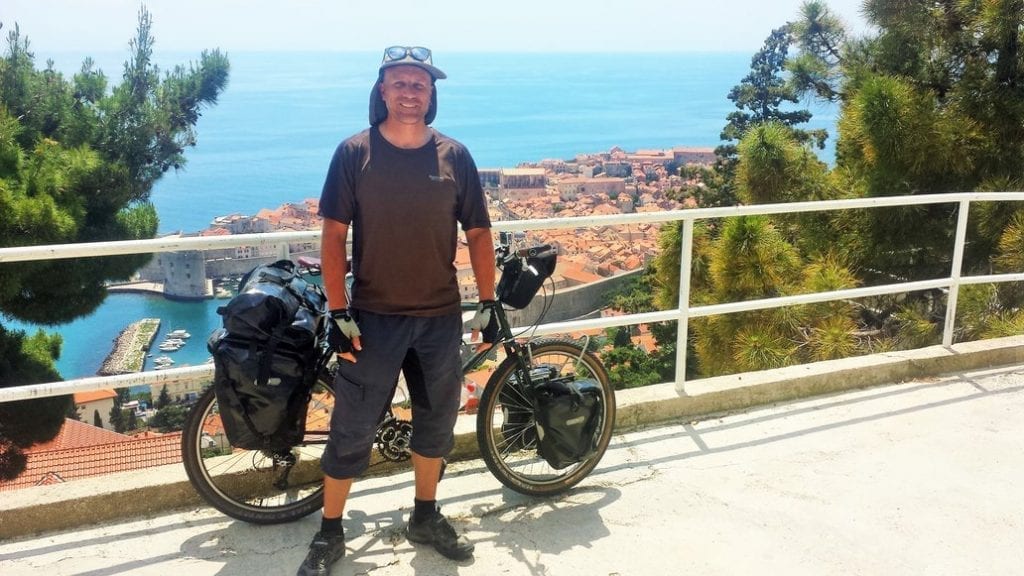 I’ll start this post by saying I’m not teaching anyone to suck eggs! If you know this stuff already, or found out the hard way, you’ll probably relate to each one of these cycling tips.

That said, you always find yourself presented with new situations on a bike tour, especially in countries you haven’t visited before. Sometimes, the habits you’ve built up over time might not be the best reaction.

I’ve kept these cycling safety tips pretty much restricted to the actual cycling part of a bike tour. How to stay safe when wild camping and in other situations requires their own blog posts!

Tips for safe cycling on a bike tour

Looking after your bike becomes (or at least should become!) a matter of routine on a bike tour. Making sure the tyres have enough pressure is a no-brainer, but sometimes people overlook the simple things like making sure bolts are tightened.

The rear rack bolts are particularly prone to becoming loose over time, and you really don’t want it coming off and then getting caught up in the spokes.

Keep a regular eye on the tyres, swapping the front and rear around to even out the degree they get worn, and regularly checking that the rims haven’t developed cracks are also good ways to prevent problems before they happen.

Knowing what the local traffic laws are, or at least doing as the locals do, is another way to keep safe when cycling. Without wanting to kick off a ‘helmet for bike touring’ debate here, it goes without saying that if the country you are cycling in requires you wear one, then wear one you should!

Once out on the road, you need to be aware of what’s going on around you. Whilst fixing mirrors to a bike isn’t my cup of tea, some people swear by them so they know what vehicles are doing behind them. You’ll soon get used to knowing the sound of a lorry approaching in the background. Which reminds me – wearing headphones for cycling is a bad idea!

4. Cycle with both hands on the handlebar You might think you were cool cycling down the road with one hand on the handlebars, and taking a selfie with the other one. You probably won’t look so clever when you hit a pothole and go over the front, knocking all your teeth out! If you are travelling ‘back heavy’ on a fully loaded bicycle, you’ll be even more likely to come off.

5. Look out for potholes

Which reminds me – keep an eye out for potholes! Seemingly beautifully laid stretches of road can have potholes appear from nowhere, and you only need to hit one wrong when cycling and you’ll have a serious accident. For this reason, I also avoid cycling at night, even if I do have good lights. Ever been injured after hitting a pothole when cycling?

Cycling too fast on a loaded bicycle when bike touring is not an issue many people face, except in one particular situation – going downhill. After hours spent grinding up a hill, it can be tempting to let loose and just go down the other side as fast as you can, but common sense says to keep it under control. Even if you need to stop a couple of times, it’s better than taking a spill at 60KPH. .

You’ll likely soon work out your comfortable cycling line when bike touring. I personally prefer to be neither too close to the curb (so I have a bit of buffer room in case there is a close passing vehicle), nor too far out into the road. Holding this line then offers a level of predictability for drivers approaching behind you. This should really fall under the obeying traffic rules section, but it’s worth reiterating again. Jumping red lights is like playing that popular 80s arcade game called frogger. Sooner or later, you are going to go ‘splat’.

When passing vehicles, especially big trucks, you need to keep aware of any blind spots they may have. The simple rule of thumb, is if you can’t see the driver (either in their mirrors or through a window), then they can’t see you. Most cyclists run into trouble when cycling down the side of a truck that is about to turn. Forget about who’s right of way it might be – think about how much the large 20 tonne truck is going to hurt!

One of the greatest dangers to cyclists, is that of being ‘doored’. Normally, this happens when cycling too closely alongside a row of parked cars. All of a sudden, somebody opens a car door, and then bang, you’ve hit it. When passing parked cars, it’s always a good idea to leave enough space on the side for a door to open, and a person to get out. Again, forget what’s right or wrong – think of your safety!

Both of these can create risks when cycling on a bike tour, particularly for cyclists towing a trailer. 9 times out of 10 it’s better to stop at roundabouts in order to judge the speed of the traffic and find a suitable gap. Coming off the roundabout can also be a tricky procedure, so make sure to pick a good line.

At intersections, although I’ve already covered stopping at red lights, don’t assume that other people will! Quite often, you will see cyclists pull away, only to nearly be clipped by somebody jumping the lights. In some countries, dogs are often not kept on a leash, and can be aggressive as they defend their territory. Each situation is unique, but some basic advice can be found here on how to deal with aggressive dogs on a bike tour.

How to stay safe on a bicycle faq

Whether you're planning a bike ride around the world, or want to commute more to work in order to get your fitness levels a little higher, these questions and answers about bicycle safety should be interesting for you:

How do you stay safe while riding a bike?

During the winter, use front and rear lights even during the day, and also wear high visibility clothing so that other vehicles on the road can see you.

What is the number 1 rule for bicycles?

Always check your bike before you ride. Make sure nothing is loose like the handlebars, that the brakes work, and that the tires are correctly inflated.

What are the 3 most important rules about bike safety?

Always ride your bike in the direction of the traffic flow, and never against it. Use a bike path wherever possible, and wear a bicycle helmet.

Are there some tips about parked cars and bicycle safety?

Car doors suddenly being opened by parked cars can one of the road hazards to look out for. Quite often, motorists don't check their mirrors properly before opening a car door, so avoid riding too close to any cars parked on the side of the road.

Is it better to take a bike ride in dedicated bike lanes?

Using bike paths is always preferable to cycling along busy roads with heavy traffic, but it does depend a lot on the country you're riding in and the cycling infrastructure. One thing to be aware of is other cyclists riding fats in the opposite direction especially around blind corners.

I hope you found these cycling tips useful. If you’ve anything to add to the conversation, please leave a comment below. Even a seemingly inconsequential piece of advice might go towards saving someone injury or worse on a bike tour. Let’s help keep our community safe! Take a look at my post on where to sleep when bike touring.