Today, I cycled over the Astoria Big Bridge on the route from Disappointment Bay to Fort Stevens. I also managed to buy a new tent!

In the morning, I got talking to a girl from Quebec who had turned up at the campground in the evening with her friend. They were both riding from Vancouver and possibly on to Panama, and pick fruit in B.C. Canada in July/August to fund their trip.

She said that there was plenty of work there, so it might be something to consider next year if funds look tight. Which they do already if truth be told.

I was away reasonably early, but I headed into the main town complex to check on an email, and couldn’t resist a Muckie D again before hitting the road again proper.

Today was the day of the Big Bridge. The Astoria bridge is 4.2 miles long, and obviously very exposed and windy. In preparation for this, I had two coffees and chose my song carefully… It seemed only Ministry – Jesus Built My Hotrod would do on this occasion!! 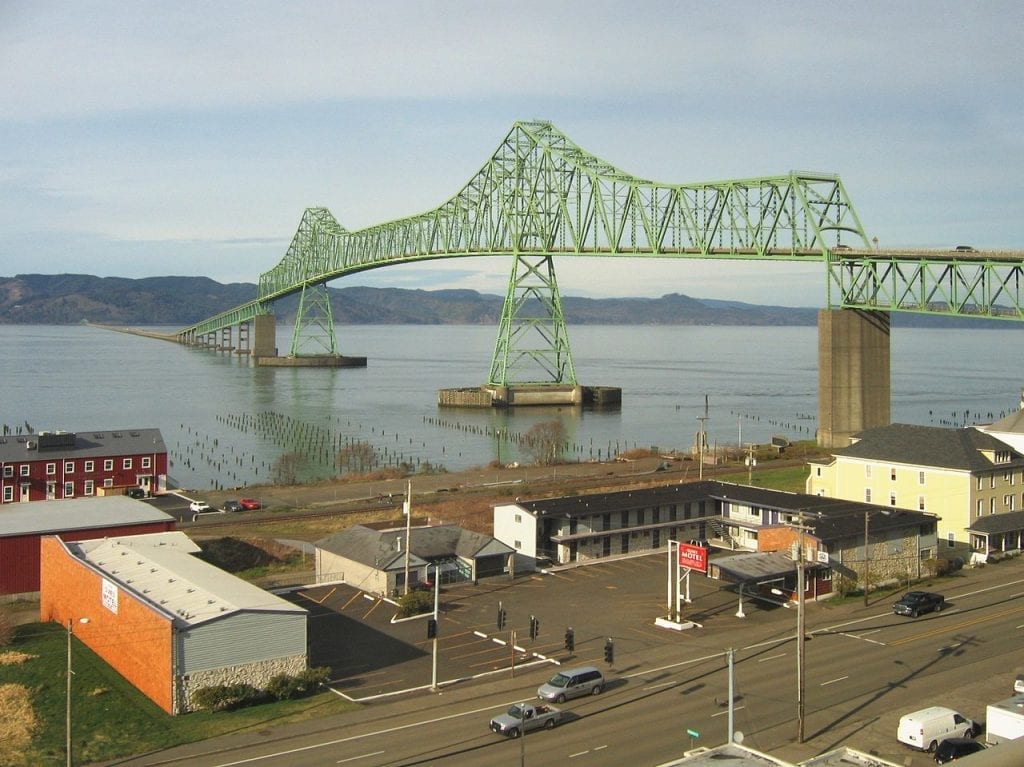 A lot of cyclists seem to think that the bridge is a big deal but I didn’t think it was all that.

An outdoor shop in Astoria

On the other side, I saw that Astoria was a reasonable size town, so I thought it wise to try to find an outdoors shop, as the weather forecast for the following ten days did not look at all promising.

The only tent the outdoor's shop had to offer was a $44.95 jobby, so you can imagine the quality. Still, needs must when the devil passes water in your tea kettle (or something like that), and so it was purchase made. I wouldn't need to sleep in the D-Ment tonight!

On leaving the shop with said tent strapped to the back of the trailer, my cycling mood changed totally.

I don’t know if it was apprehension on putting up a tent which had a fifty/fifty chance of being little better than just a tarpaulin, the traffic, the wind, the glass on the road or just the coffee wearing off, but I certainly didn’t feel relaxed.

I decided that a short day was in order, and so headed out to Fort Stevens State Campground.

On the way, I noticed a thrift store, and so detoured so I could buy a book to read. The woman running it sounded just like Nan Briggs!! Turns out she was from Birmingham, and had been living in the states for thirty odd years.

We had a bit of a chat, and she refused to take my money for the book, and also filled my pockets with lollipop. Thanks me duck!

New tent in the campground

Much happier, I made it to the state campground, where at last I had found one of the fabled $4.00 a night hiker biker sites. I should now be able to hit one of these every night whilst in Oregon, something I have been looking forwards too!

The tent proved easy to put up, and just in time, as it then rained for the next 16 hours. Now, its not entirely water proof, but with the tarpaulin over the top, its serviceable, and certainly better than no tent at all.

Brucey bonus – Its for four people, so there’s acres of room in there!!

– Dave Briggs
Dave wrote this travel guide about cycling to Fort Stevens when cycle touring from Alaska to Argentina.