Last Updated On June 13, 2020 by Dave Briggs Leave a Comment

This blog entry covers the day's cycling from Flores to Finca Ixobel, Guatemala. Part of my 18 month bike tour from Alaska to Argentina.

Cycling out of Flores, Guatemala

Blog post written March 06 2010 when cycling from Alaska to Argentina.

After spending a few days in Flores, it was time to start pedalling down the road once more. Today, my destination would be Finca Ixobel.

So today, we left Flores, and three kilometres down the road, Oliver and I parted company. He is now heading to Belize, whilst I stick to Guatemala for the time being, and head towards Lake Isobel, and El Salvador.

I’ve really enjoyed his company over the last week or so, and its been great fun to share the road and experiences with him.

Cycling with another person or group is definitely far easier than cycling solo, but of course it does rely on having a cycling partner who has the same way of thinking, goals and abilities.

That said, I am looking forwards now to breaking new ground, and the excitement that comes from heading off down roads and into the back of beyond of a foreign country by yourself. 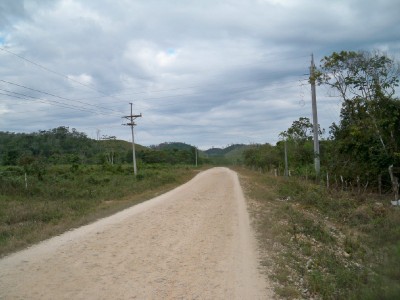 It wasn’t a promising start, when my route took me over a rough road directly next to the landfill site. This stretched on for a kilometre or so, and unless anyone is interested in vultures tearing apart smoking piles of dirty nappies, I suggest avoiding it.

About 10 kms later, I rejoined the main road, where my only problem was that my camera stopped working. A couple of hard whacks against the handlebars seem to have temporarily solved that one though.

Originally a farmstead bought by an American couple, it now styles itself as an ecological retreat and backpackers centre.

Volunteering is possible here, and the place has a laid back feel to it, although I really want to cover more ground, so I will only be staying the one night.