My second day of cycling in Alaska was considerably tougher than the first. Cycling through inches of thick mud will do that to you!

Cycling from Happy Valley to Galbraith Lake in Alaska

In comparison to my first day cycling out of Deadhorse, today, was a tough day. My legs were still aching from the day before, and I hit my first series of rolling hills.

This in itself wouldn't have been too bad, if I wasn't carrying six days of food with me. Even worse, was that the heavy rain during the night had turned a fifteen mile stretch of road into a wet concrete bog.

I don't know if you've ever tried cycling through wet concrete, but I strongly suggest against it. I frequently had to stop in order to throw handfuls of gloop off the bike where it had clogged up the forks and mudguards, and stopped the wheels from turning.

(This experience led me to never use fenders on a cycling trip again!). 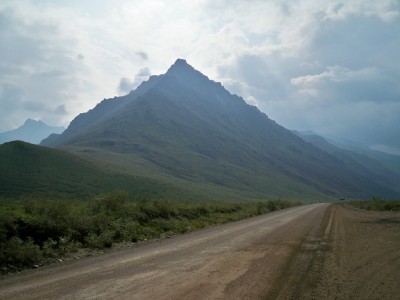 Related: Why is my bicycle hard to pedal?

Pushing the bike is no fun!

There was an awful lot of pushing the bike because of all these factors. This was not made any easier by the trailer. In fact, it's probably around this time I started to wonder if I made a mistake using a trailer instead of panniers.

After 11 hours of strenuous work, I reached my goal of Galbraith Lake. I somehow managed to get a campfire going from the rain soaked wood which lifted my spirits somewhat, but knowing there was another big day ahead of me, I opted for an early night as possible.

Perhaps cycling the Pan-American Highway was going to be more difficult than I had imagined?

The Galbraith Lake campground has  15 camp sites with fire rings, pit toilet and picnic tables. The lake itself is about a mile away from the campsite.

It's ideal for tent camping when bike touring along the Dalton Highway, and you can get water from a small creek.

Use the links below to read more about this section of the journey cycling from Alaska to Argentina: