Cycling along the Oregon Coast was a real highlight of bike touring in the US. Today, I cycled from Humbug Mountain to Harris State Park, bumping into a number of other cyclists along the way.

Cycling along the Oregon Coast

Another beautiful day. I have to say that the Oregon coast seems very easy in comparison to some of the cycling that I have done, and the views are simply amazing.

Along the road, I came across the UK couple (Rodney and Ruth), and a French cyclist (Romaine I think).

Rodney's rear wheel had broken a spoke, and he hadn’t got any spares. Fortunately, Romaine had come along who did have spares, but no one had a cassette removal tool, which is where I came in.

With my contribution of the socket, spanner and a spare chain to use as a chain whip, the cassette eventually came off after a lot of grunting.

A couple in an RV had also pulled over at this point, so I managed to get a picture ‘’How many cyclists does it take to fix a wheel?’. 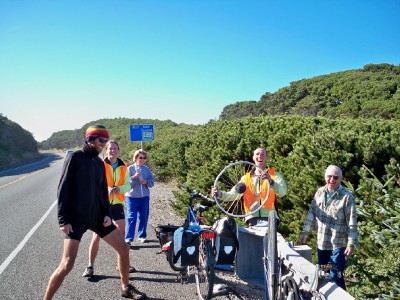 When the spoke was in, the Canadian couple then cycled up, turning it into a party on the roadside. Eventually, the wheel was going around pretty well, and the bike was good enough to ride.

I followed behind in case the tools were needed again (and I carry twice as much crap as everyone else, slowing me down a touch).

I stopped off in Gold (something) for a coffee in an Hawaiian Aloha café run by a guy that looked like Big Gay Al from South Park which was a bit surreal.

Then it was more awesome views all the way to Harris State Park, where the others had already arrived. After I was set up and showered, Rodney turned up with a pack of beers and asked if I wanted one. Dave never says no to a beer!!!

Video of cycling in Oregon

That was the last night in Oregon, and so I made a slideshow of my Oregon photos which is below.

Find more blogs about about cycling from Alaska to Argentina below:

– Dave Briggs
Dave wrote this travel guide about cycling to Harris State Park on the Oregon Coast when cycle touring from Alaska to Argentina.