Last Updated On October 14, 2018 by Dave Briggs Leave a Comment

This bike touring blog update is short but sweet, and covers cycling from Gualala Regional Park to Bodega Dunes as part of my Pan American bike tour.

Although I've rarely seen a bottle of wine per night added to a cyclists diet, it seems a wonderful way to replace calories to me! Somehow still managing an early start (if it was beer, i would have been rolling around groaning), I hit the road. 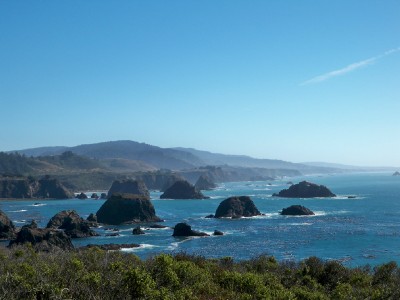 There were some quite challenging sections, and also, as the road followed the coastline quite closely, some rewarding sections also.

There were a lot of turkey vultures (someone will have to double check that!) wheeling about in the sky – Were they waiting for me to make a mistake and veer off the road I wonder?

I made Bodega Dunes campground mid afternoon, and Guy, Rodney and Ruth were already there, with Mark and Ash arriving later on. We're like a cycling travelling circus now!