Last Updated On May 8, 2021 by Dave Briggs Leave a Comment 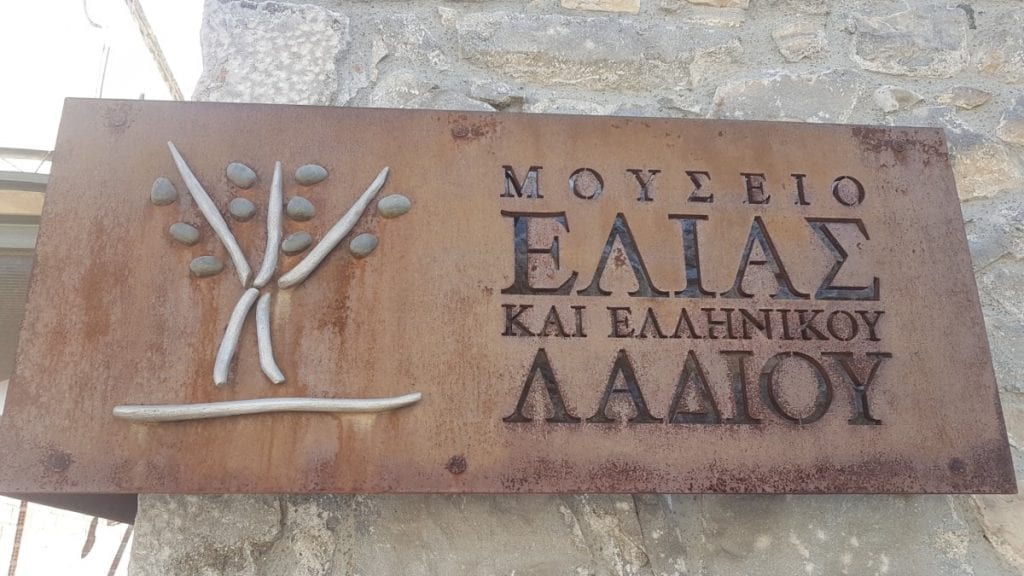 The Olive Museum in Sparti

The Olive Museum in Sparti, or rather the Museum of the Olive and Greek Olive Oil, is a private museum. It is managed by the Piraeus Bank Group Cultural Foundation. This foundation runs several cultural museums all around Greece, such as the Museum of Marble Crafts in Tinos, the Silversmithing Museum in Ioannina and a few others.

The museum was launched in 2002, and it is fittingly located in Sparti, the famous ancient city-state. Nowadays, Sparti is a small, charming town, and it’s the capital of Laconia area in the Peloponnese, one of the most important olive oil producing areas in Greece.

Museum of the Olive and Greek Olive Oil

The Sparta Olive Museum is hosted in an industrial building, formerly used by the Sparta Electric Company. It spreads out over two floors and a large courtyard. Many artifacts are exhibited, in order to help visitors understand the importance of olives and olive oil in Greek life. 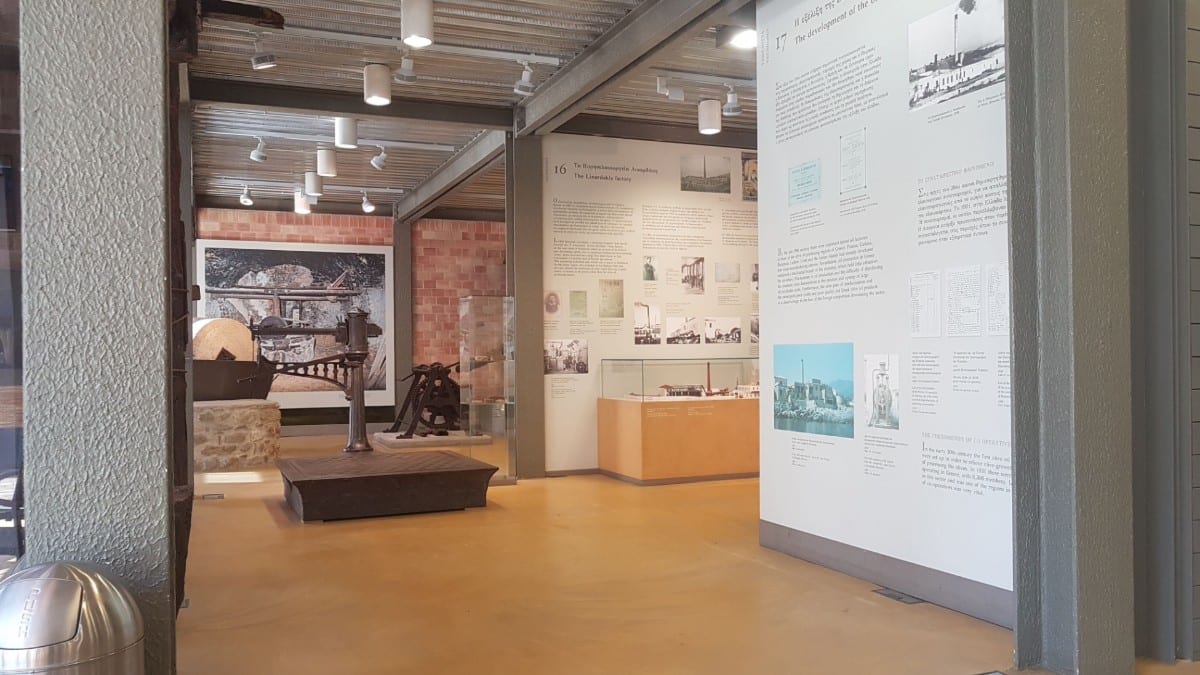 Inside the Olive Oil Museum in Sparti

Inside the museum, you will find a lot of information about the history of the olive tree and the olive oil making procedure. You can see artifacts dating from ancient times, proving the significance of olive oil in everyday life. 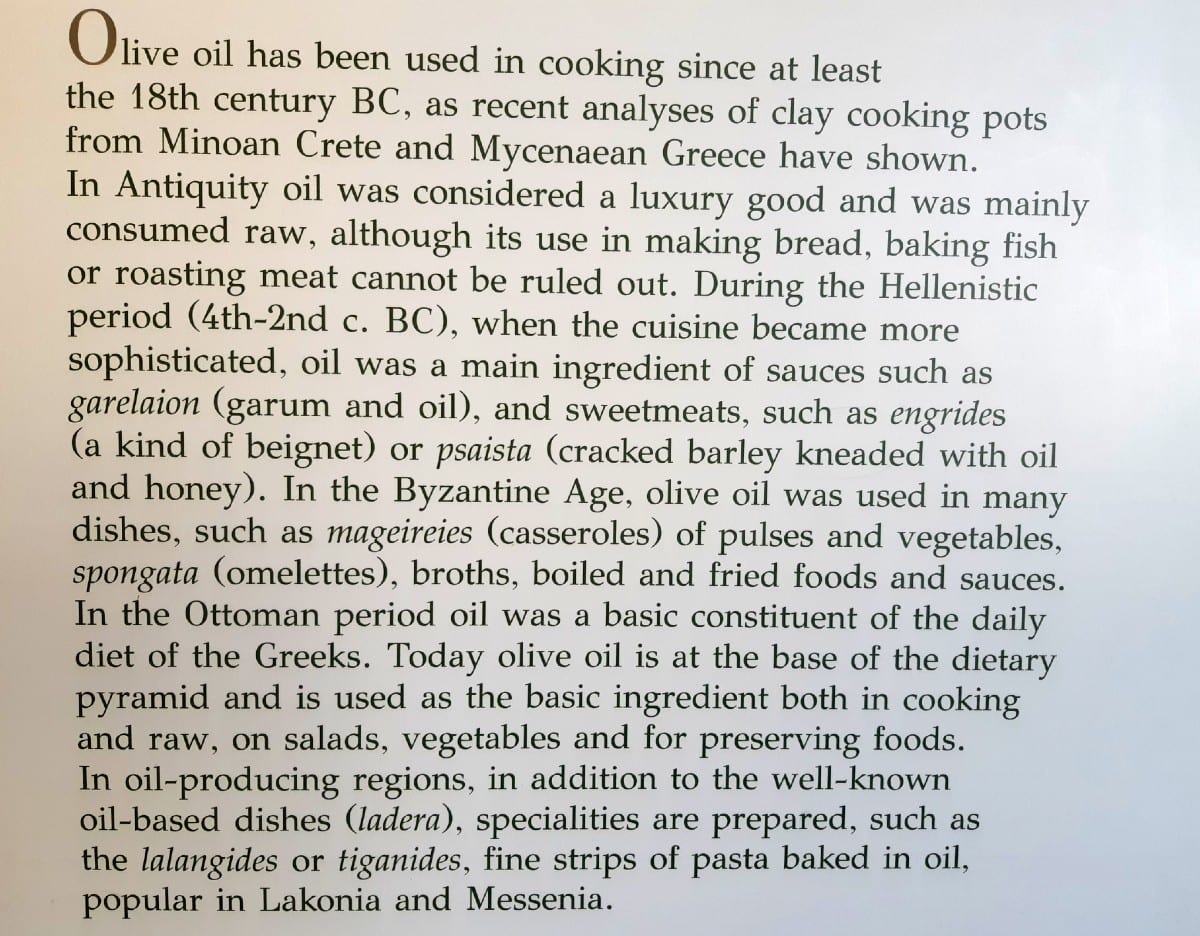 Olive oil was used in cooking, but not only. It was a valuable element for personal hygiene, as it was used as a cleanser, moisturizer, and the main ingredient of soap bars.

At the same time, it was important for religious purposes, performing rituals etc. Its use as fuel was also significant for several centuries.

Processing the olive fruit to make olive oil is an ancient practice. In the past, olive presses used to be operated by people or animals.

In fact, not much changed in the olive oil making procedure until the late 1800s / early 1900s. New methods emerged around that time, as a result of the industrial revolution. 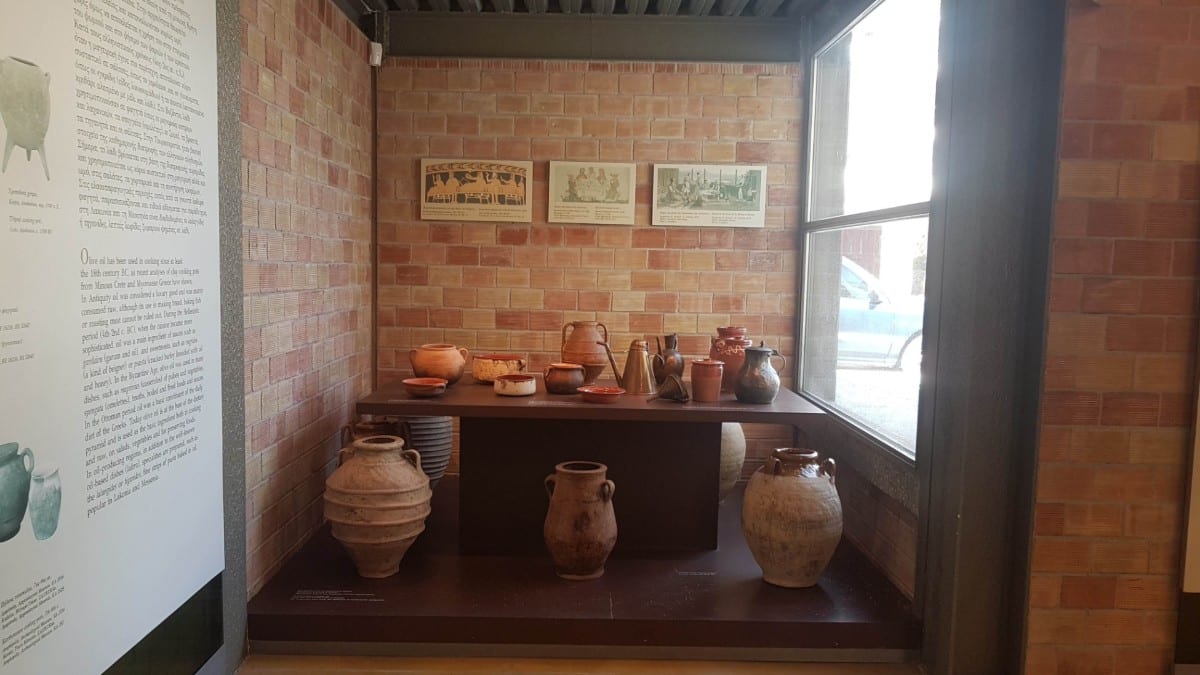 What you can see at the Olive Museum in Sparti

Some of the most interesting artifacts in the museum are the fossilized olive leaves that were found in Santorini.

It is estimated that they are at least 50,000 years old, proving that the olive tree has existed in the Mediterranean Basin for millennia.

You can also see replicas of some 14th century BC tablets, with written testimonies about olive trees and olive oil. 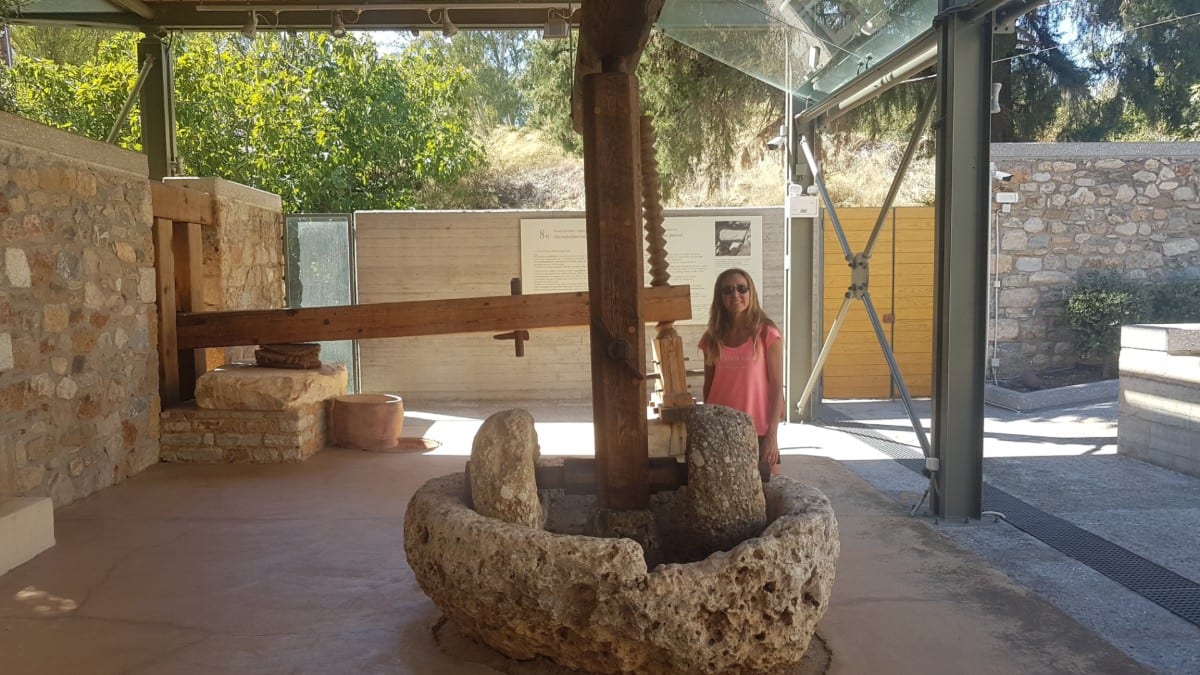 Arguably, the most impressive objects in the museum are the reconstructed olive presses in the museum’s courtyard. There are three olive oil presses, from prehistoric, Hellenistic and Byzantine times. We found that the procedure didn’t really evolve too much over the centuries!

Inside the museum, there are models of modern olive pressing stations. It is really interesting to see how technology has shaped this ancient practice in the last century or so. Moreover, you can watch a video explaining how handmade soap is still being produced. 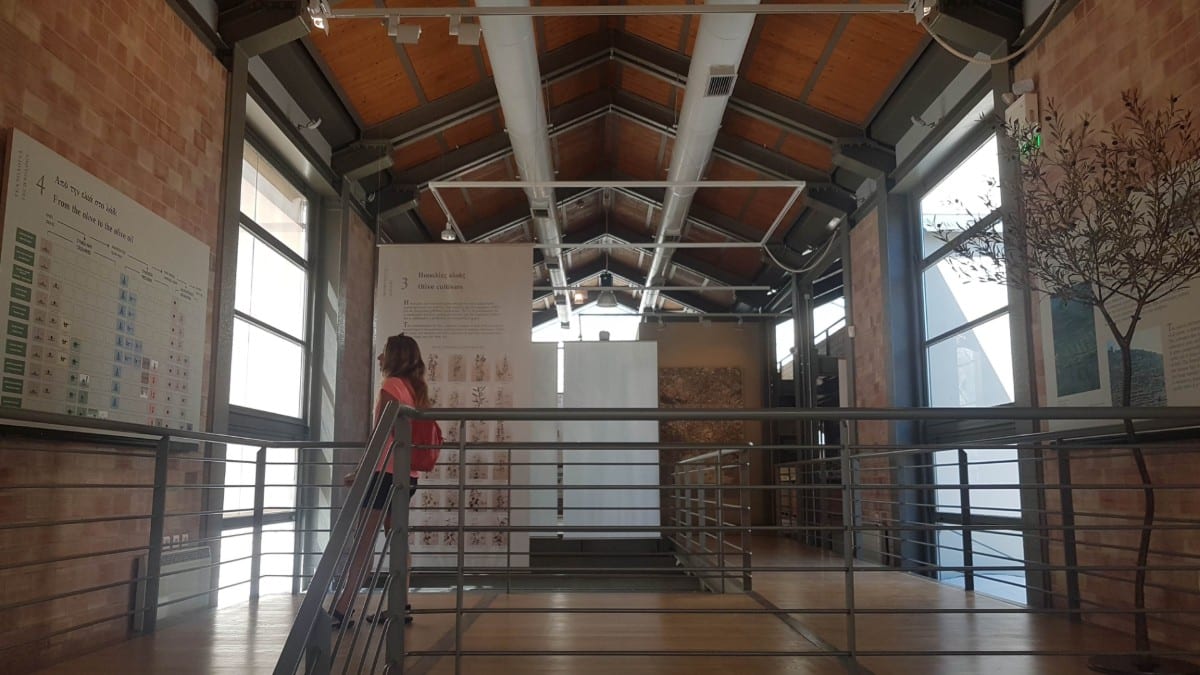 If you wander around the museum and read the informative posters, you will get a better understanding of why Greece is so closely linked to the olive oil production.

Olives and olive oil are not just a food or an ingredient – they constitute a huge part of the culture. Even today, harvesting the olives is quite a big occasion.

With all the above in mind, it shouldn’t come as a surprise that the olive has had an important role in Greek art over the centuries. This unique tree is prevalent everywhere.

From ancient Greece and the legend of Athena who planted a tree up on the Acropolis rock, to the contemporary paintings of Alekos Fasianos, the olive tree has always been an inspiration.

Visiting the Museum of the Olive and Greek Olive Oil

The Museum of the Olive and Greek Olive Oil is located 1.5 kms (1 mile) from the KTEL bus station in Sparta. If you have your own transportation, there is a parking space nearby.

The museum is open from 10.00-18.00 in summer and 10.00-17.00 in winter, and it’s closed on Tuesdays and certain days of the year. Standard admission price is 4 euros, and there are discounts and free admission days. 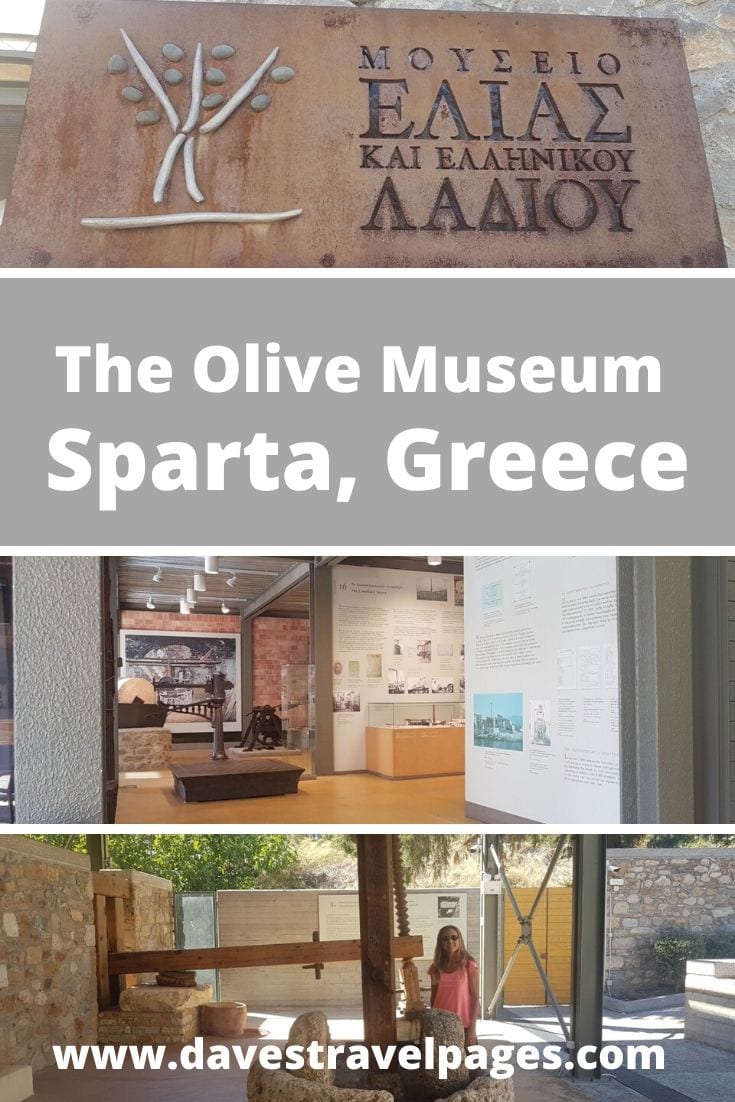 You might also find these other Peloponnese guides useful for planning a road trip in Greece: