The historic town of Areopoli in the Mani peninsula of Greece should definitely be added to a Peloponnese road trip itinerary. 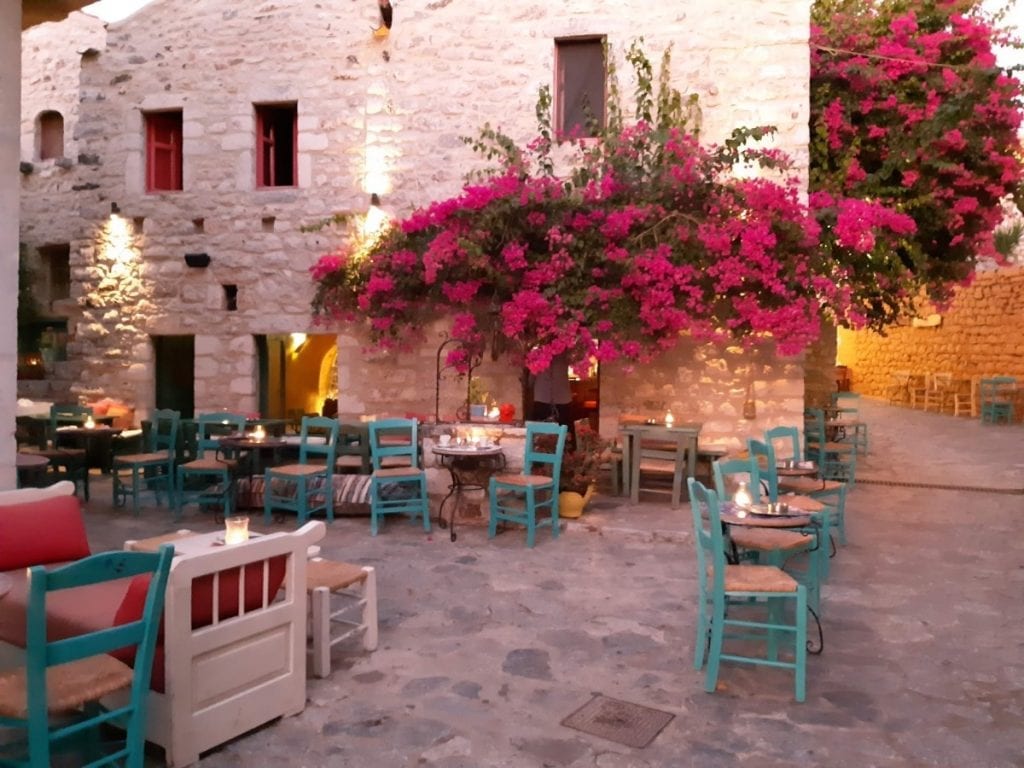 Famous for its role in the Greek revolution, the evocative stone houses and tavernas of Areopoli entice visitors to stay longer than the one night they originally planned!

Areopoli, also known as Areopolis, is a small town in the Mani peninsula of the Laconia prefecture in the Peloponnese. It is 80 kms south of Kalamata, and 22 kms from Gythio.

This small town is incredibly picturesque, as it’s full of the traditional stone houses that are so characteristic of the Mani area. Unlike other villages where the stone houses have been abandoned, Areopolis still has a sizeable population of just under 1,000 residents. 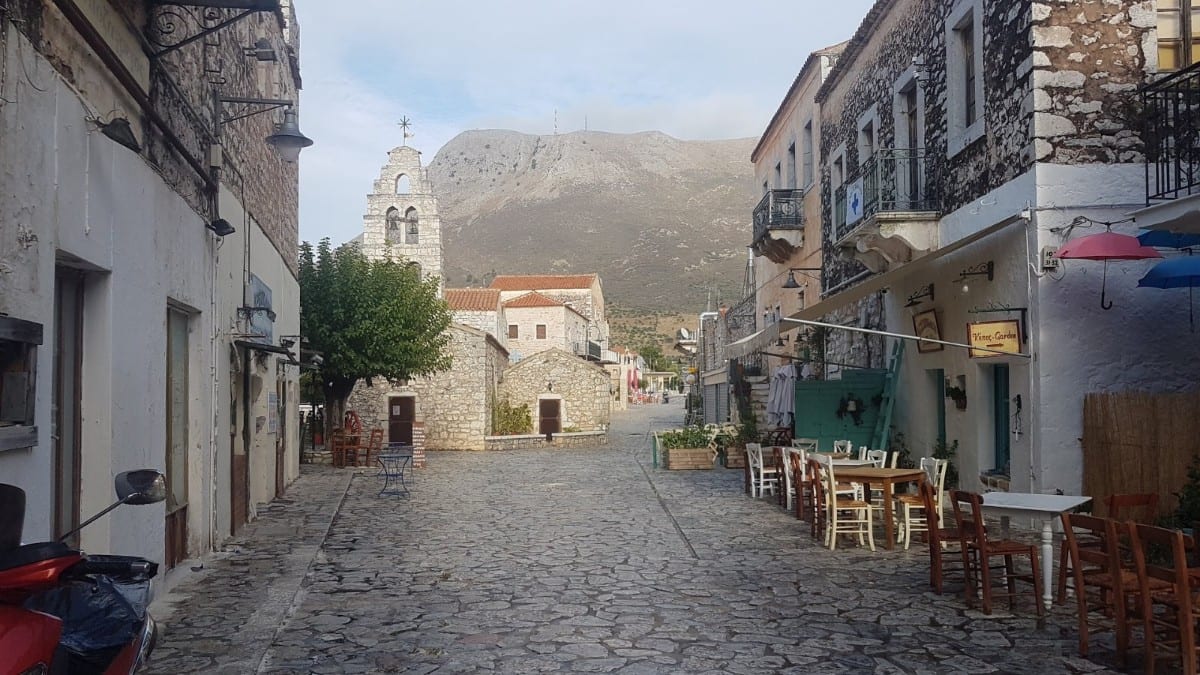 Areopolis is built at an altitude of 242 metres, and it’s located very close to the west coast. It is a great place to stop if you want to stay in a quiet mountain town, but have easy access to the great beaches in the Peloponnese.

During a road trip in the Mani area of the Peloponnese, we spent a couple of nights in Areopoli. An ideal amount of time to soak up its vibe and taste some of food in the tavernas that the town is so renowned for!

It is believed that the wider area was inhabited since the Paleolithic period. However, it is not clear when the town of Areopolis was first established.

What is known for certain, is that the town played a very important role during the Greek Revolution against the Ottoman Empire, in 1821. 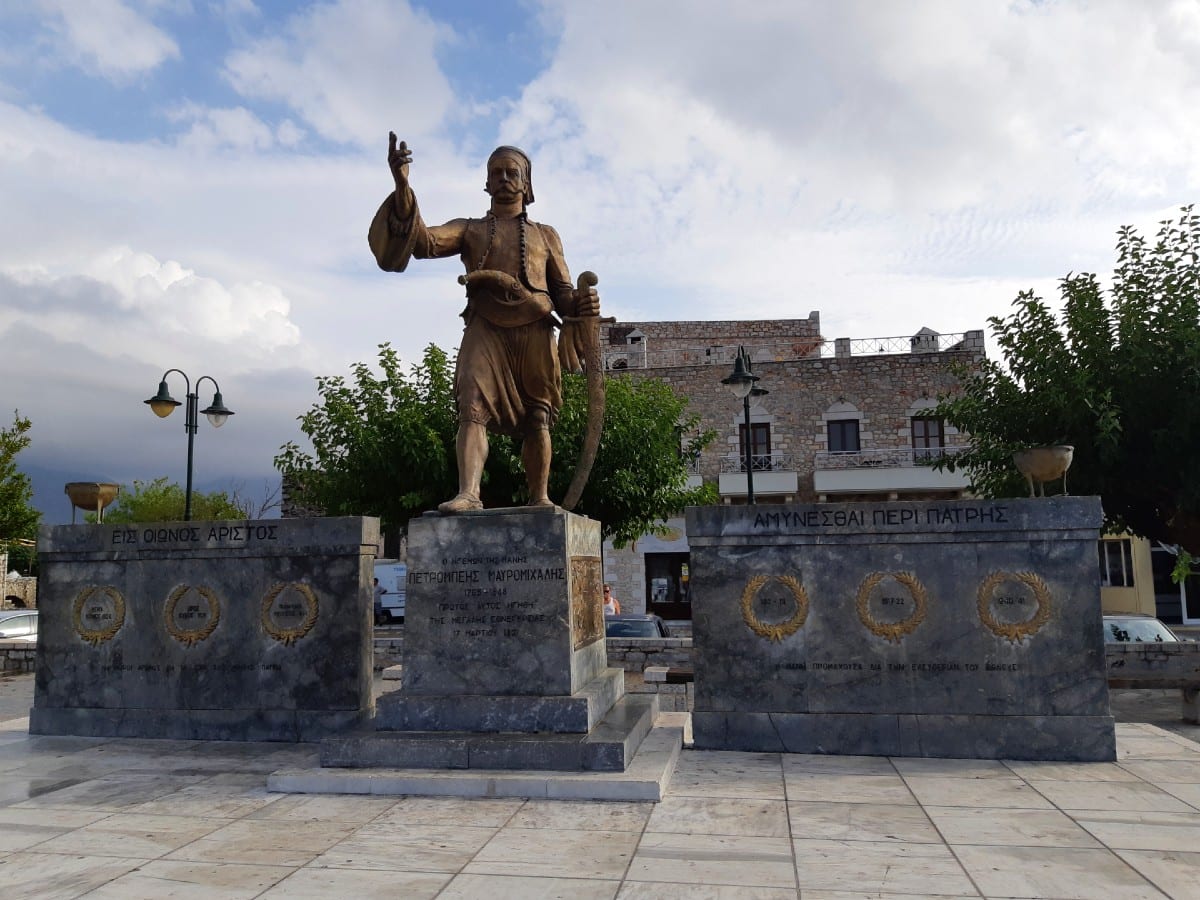 In fact, Areopolis is known as the city where the first Revolution flag was raised, on 17 March 1821, by the local hero Petrobeis Mavromichalis.

Several local families, whose statues and names are all around the town, took part in the uprising. At the time, the town was called Tsimova, and was one of the few towns in Greece that had kept its independence from the Ottomans.

The Revolution flag was not the Greek flag as we know it today. Instead, it was a simple white flag with a blue cross in the middle, and the phrases “Victory or Death” and “With your shield, or on it”.

We actually saw a version of this flag on a house in the middle of nowhere, a few kilometres out of Areopoli! 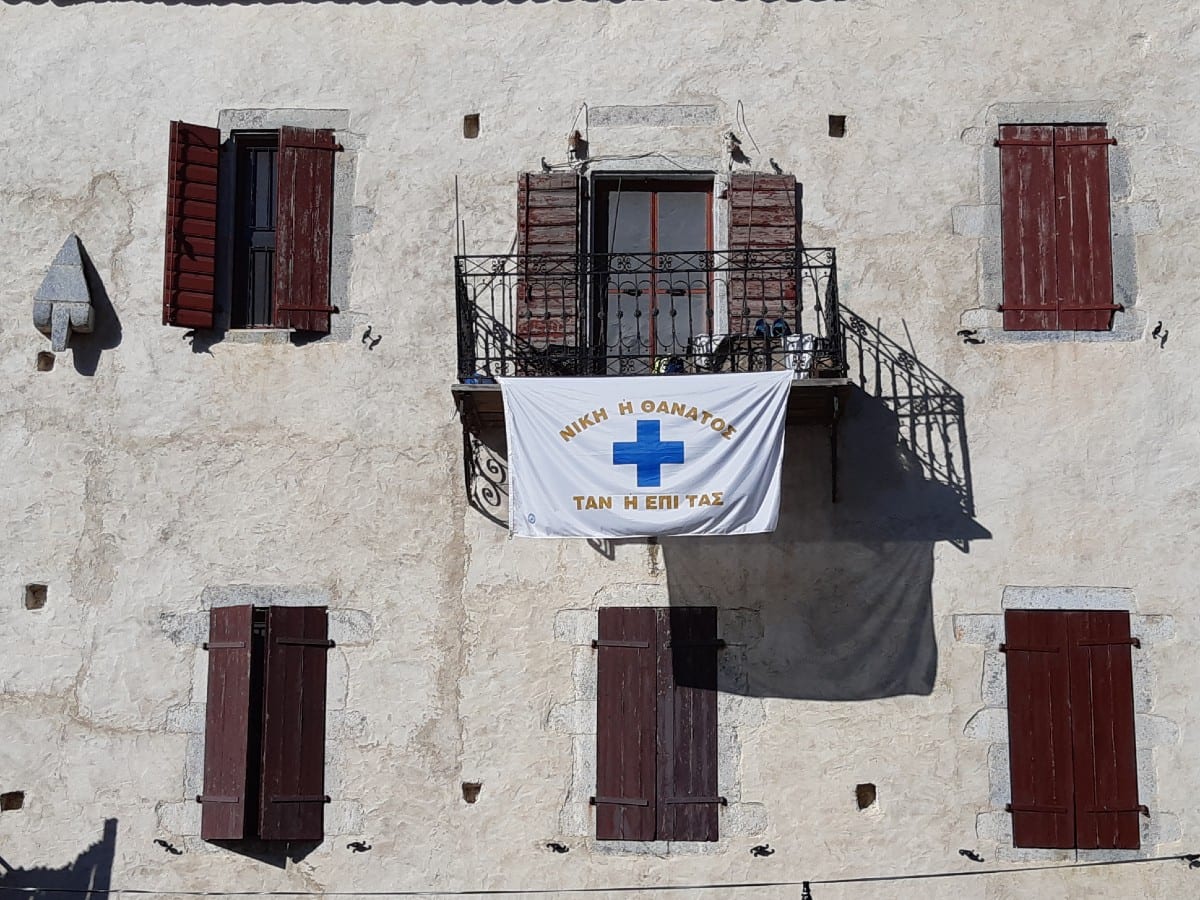 The first phrase was the motto of the Revolution in the Mani. If you are familiar with the phrase “Freedom or Death”, which is the motto of the Greek Revolution, you are right. It’s just that people from the Mani never considered themselves enslaved.

The second phrase was the Ancient Spartan motto, by which Spartan women would farewell their sons going to war.

You can see the actual flag, and find out a lot more about the Greek Revolution, in the National Historical Museum in Athens.

The end of the Revolution in Areopolis

After the end of the Revolution, the city was renamed to Areopolis. There are different theories regarding its new name. It is likely that it was named after the ancient God of War, Ares, to showcase the people’s bravery and fighting spirit.

Not surprisingly, there are other towns in the Peloponnese that claim the honour of starting the Revolution. Even though this is fairly recent history, there seem to be few written documents.

If you happen to visit Areopolis on 17 March, make sure you take part in the celebrations. This is when the locals honour the memory of the Greek heroes.

Over the years, Areopolis grew into one of the most important towns of the Mani area. Along with Gythio, it is among the largest towns before you head south, into the wilderness of the Mani. 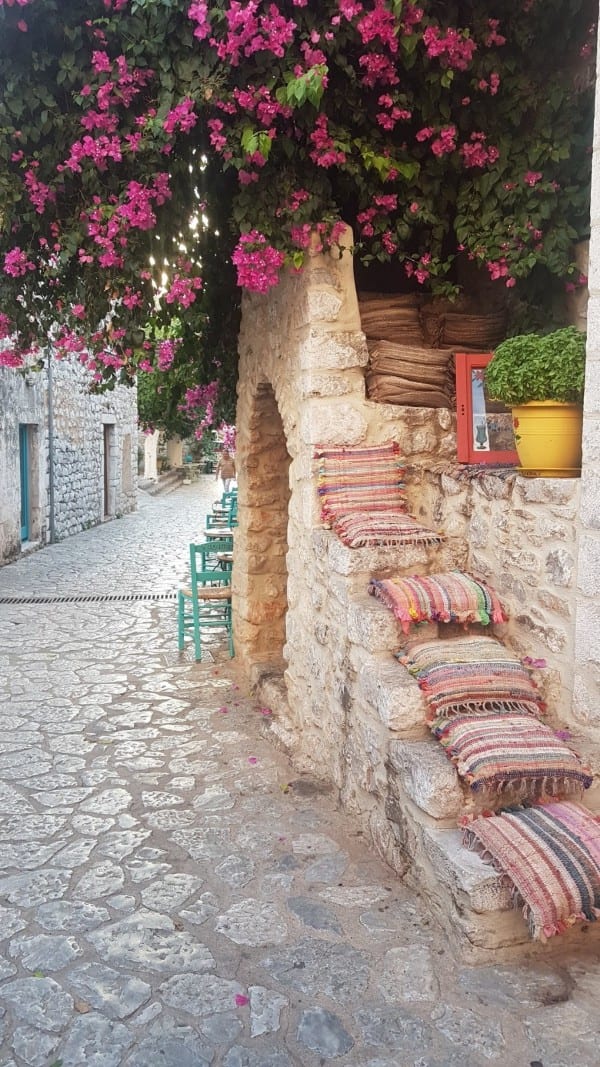 The town has a very small historical centre, which has been beautifully preserved and restored. The traditional settlement of Areopoli, with its beautiful stone houses, is one of the prettiest little towns in Greece.

Recent refurbishments have helped in this direction, and this flourishing town is becoming a destination on its own, rather than just a quick stop in the Mani.

When it comes to things to do in Areopoli, this charming little town is great for strolling around, and exploring the cobbled streets and picturesque stone houses and towers. Some of them have been transformed into boutique hotels and guest houses, while others host small local museums.

You will see the imposing statue of Petrobeis Mavromichalis, the local Revolution hero, in the main square. If you can read Greek, you will see the phrase “Fight for your country—that is the best, the only omen”, originally appearing in Homer’s Iliad. Fittingly, the square’s name is “the Square of the Immortals”.

As you walk around the historic centre, you will see a sign marking the exact point where the Revolution flag was raised. The sign is only in Greek, and this is what it looks like. 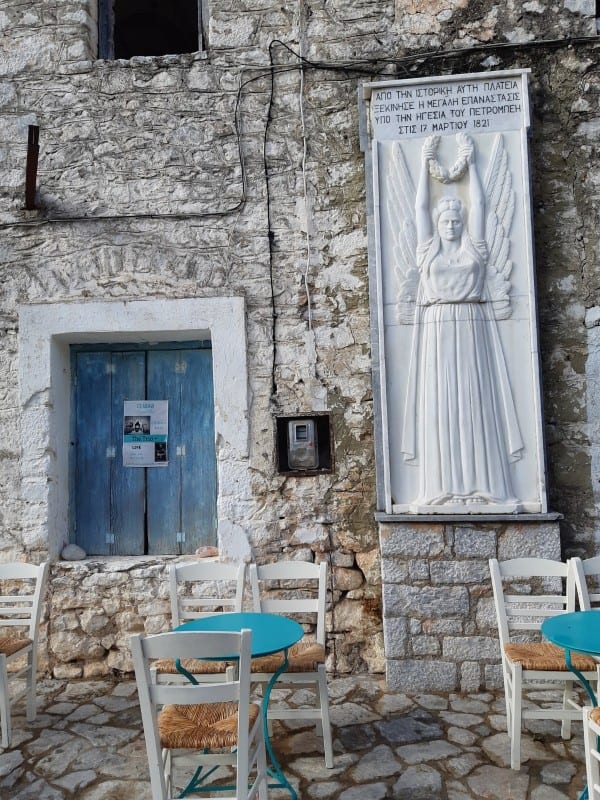 The beautiful Agioi Taxiarches church was unfortunately closed at the times we visited. Apparently it’s rarely open. It is said that the revolutionaries attended the mass here before starting the revolution.

There are more churches in the town though, and some of them have impressive frescoes and other artwork. 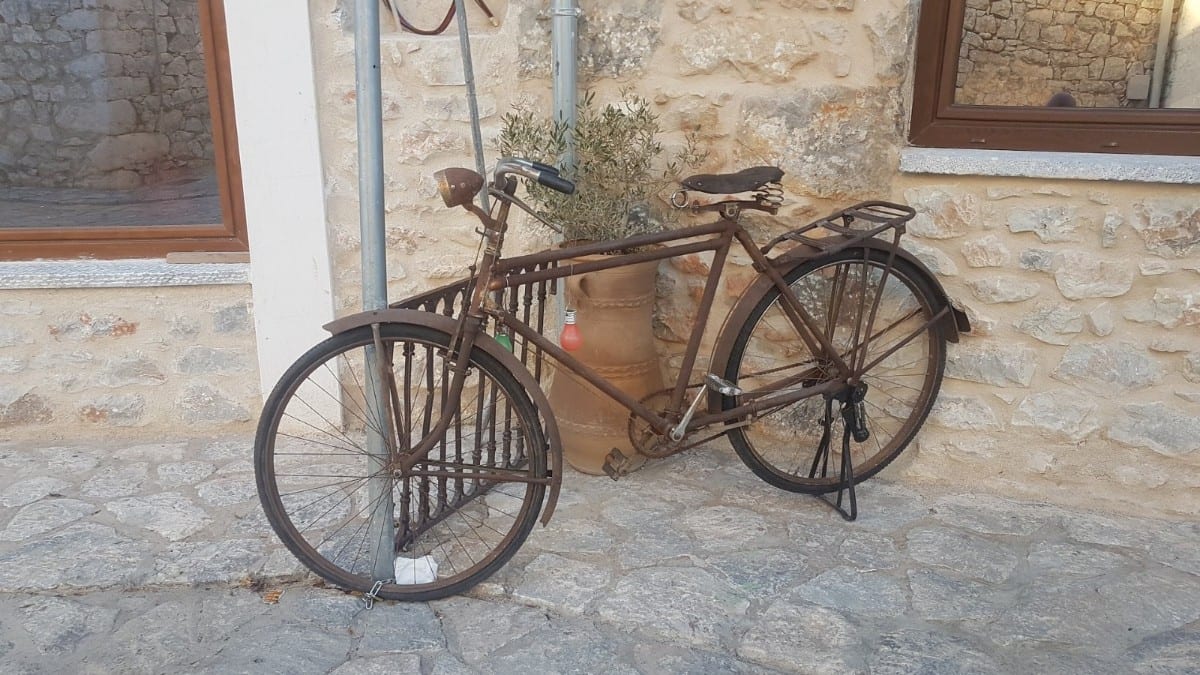 You can easily walk around the entire town in an hour or two, but we totally enjoyed spending a couple of evenings there.

There is more than enough in terms of cafes, tavernas, restaurants and quaint little bars, and they have all paid a lot of attention to detail. 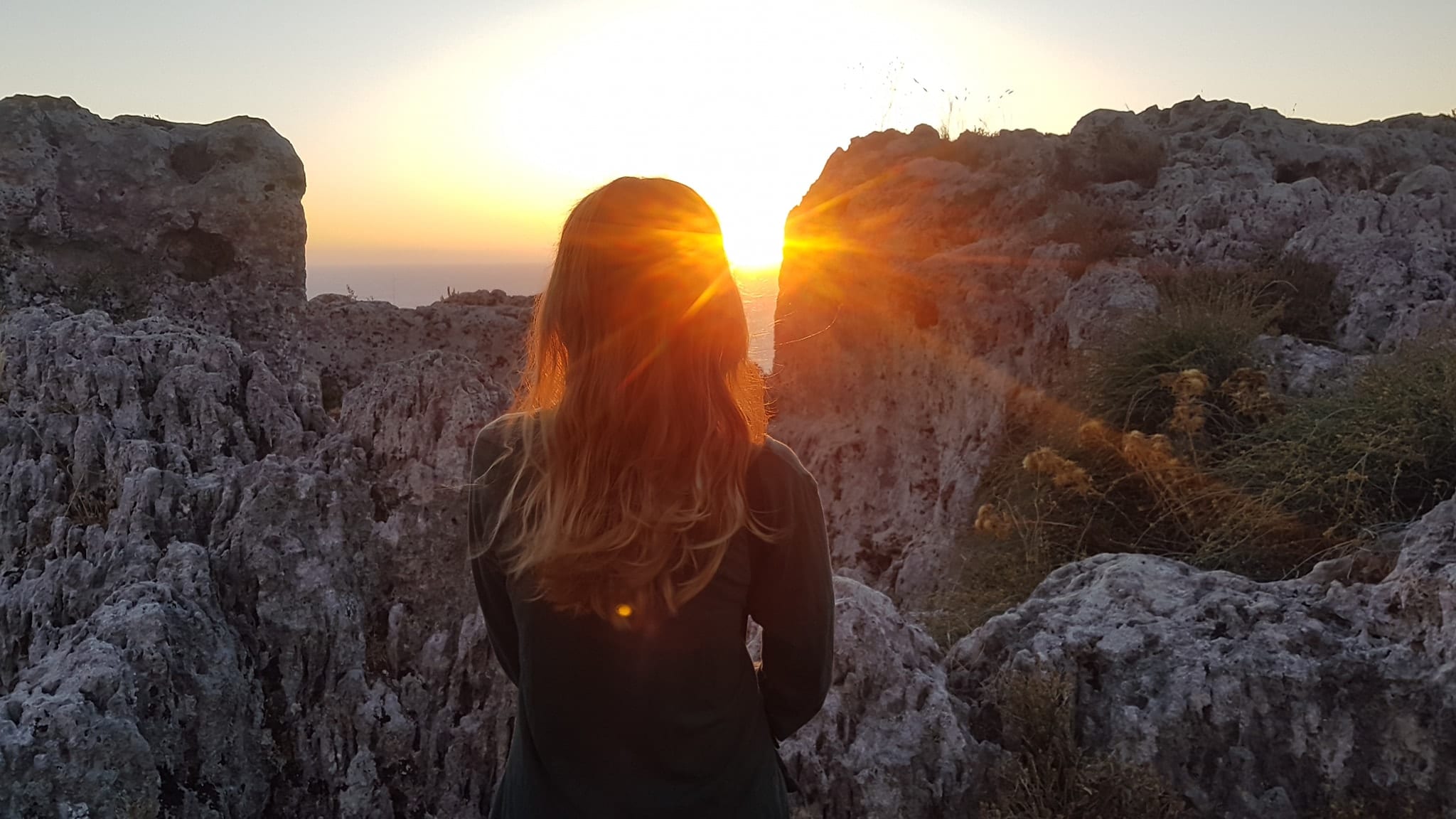 If you follow the signs to Spilius café-bar, you will reach a sunset viewing point. I’m glad the Mrs insisted on going for a random walk!

If you happen to be in Areopolis on a Saturday, do not miss the vibrant street market. Even if you aren’t interested in buying fruit and veg, it’s a great chance to observe the local life.

Areopolis is best visited during a road trip to Mani, or as a half-day trip from Kalamata, Sparti or Gythio. There are a few places worth visiting around this picturesque little town, so you can use it as your base and drive around the area.

Arguably, the most popular attraction near Areopolis are the Diros Caves, also known as Vlychada or Glyfada. These impressive underwater caves were only discovered in 1949. 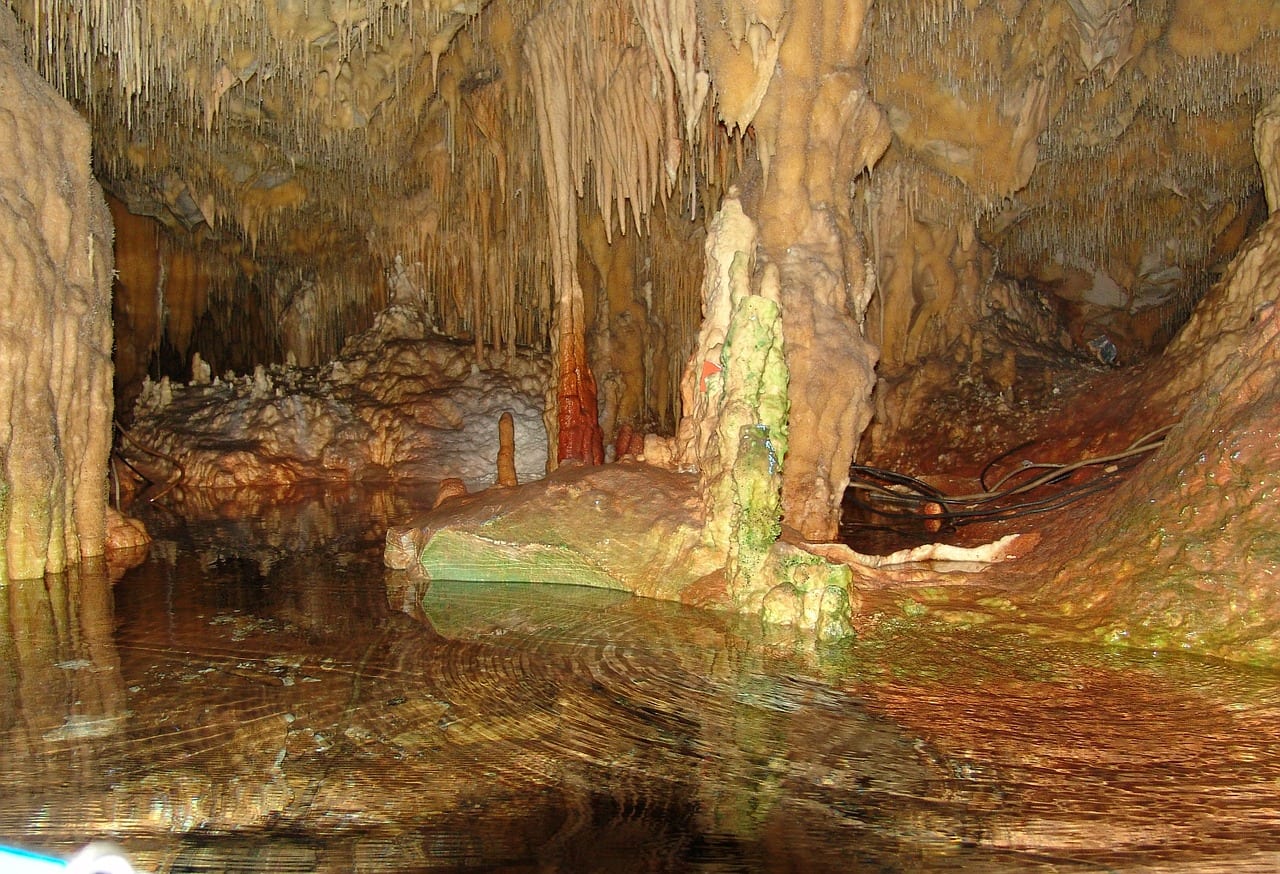 Visiting the caves is an unforgettable experience, especially if you have children, as you will go around on a boat. Several types of fossilized bones have been found in the cave, belonging to deer, hyenas, lions, panthers and even hippos! 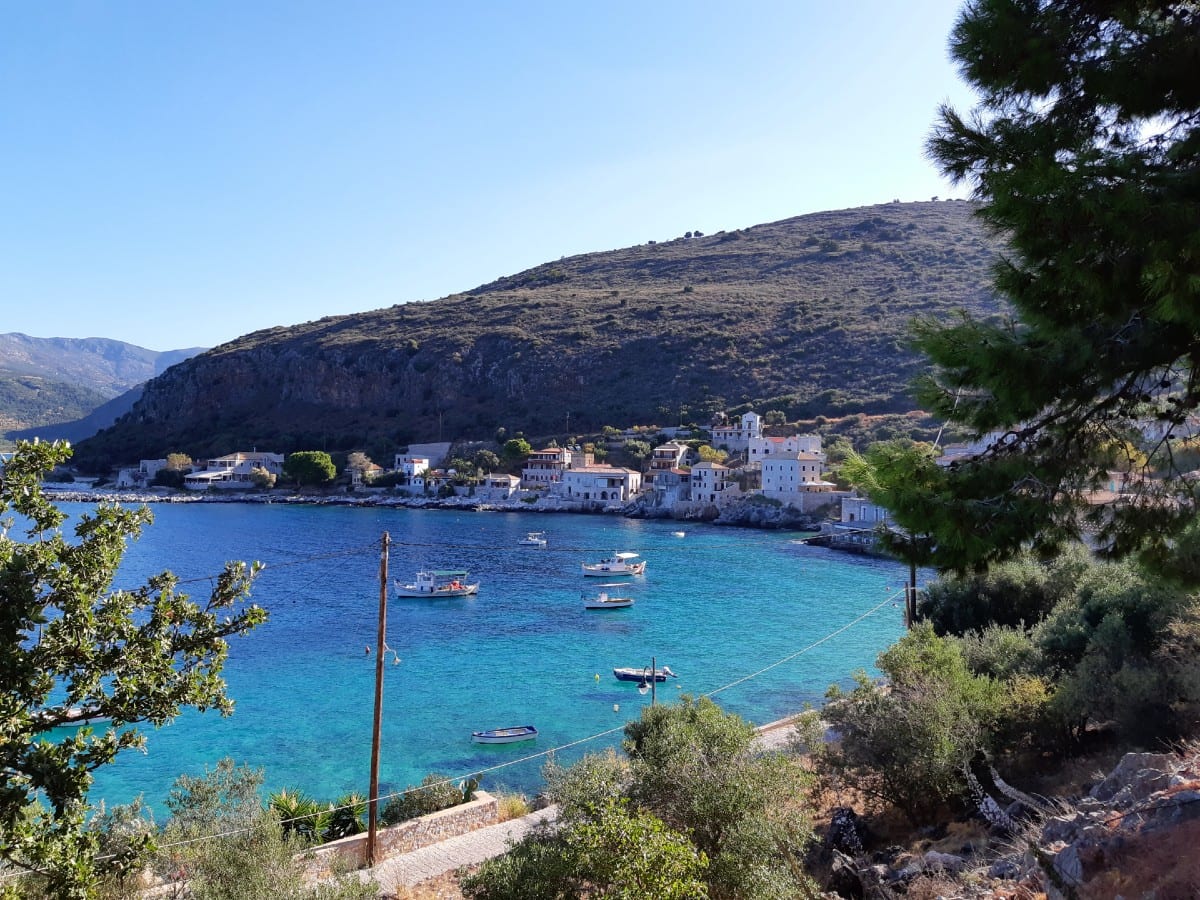 Close to Areopolis, you will find the pretty little coastal village of Limeni, with a few tavernas specializing in fresh fish. It doesn’t have much in terms of a proper beach, but you can walk down some stairs and go for a swim. You can see the grave of Petros Mavromichalis here. 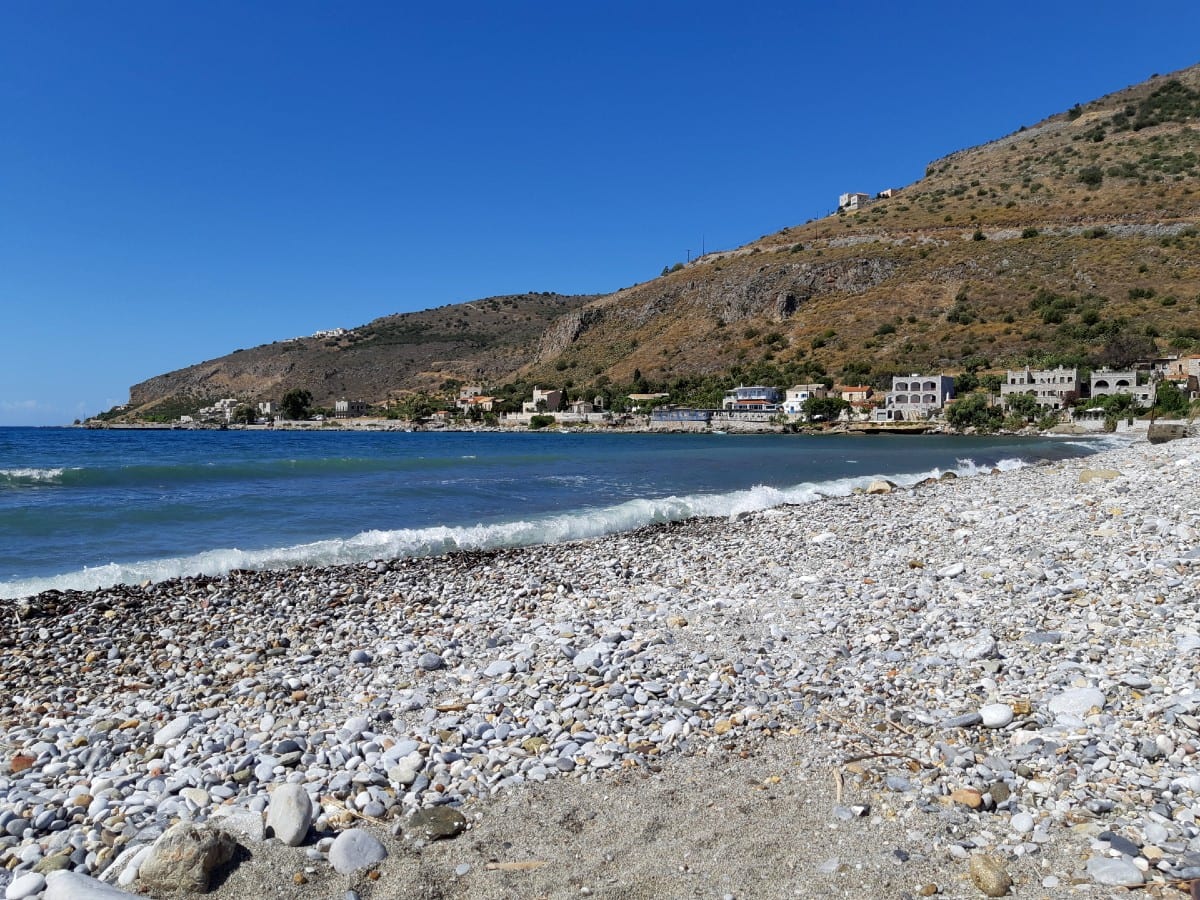 If you want to spend some time on the beach, nearby Oitylo is your best bet. There is a rather narrow stretch of sand and pebbles, where you will find umbrellas and loungers.

Alternatively, you can go to nearby Karavostasi, where there is a very pebbly stretch.

No trip to this part of the world is complete without driving south towards the end of the mani peninsula and seeing the village of Vathia.

There are many Greek villages in this area which have tower houses, but none so evocative as this almost ghost town like settlement.

Further away, you can visit Gythio (but you should spend a night or two there), or head south to the remote Mani. 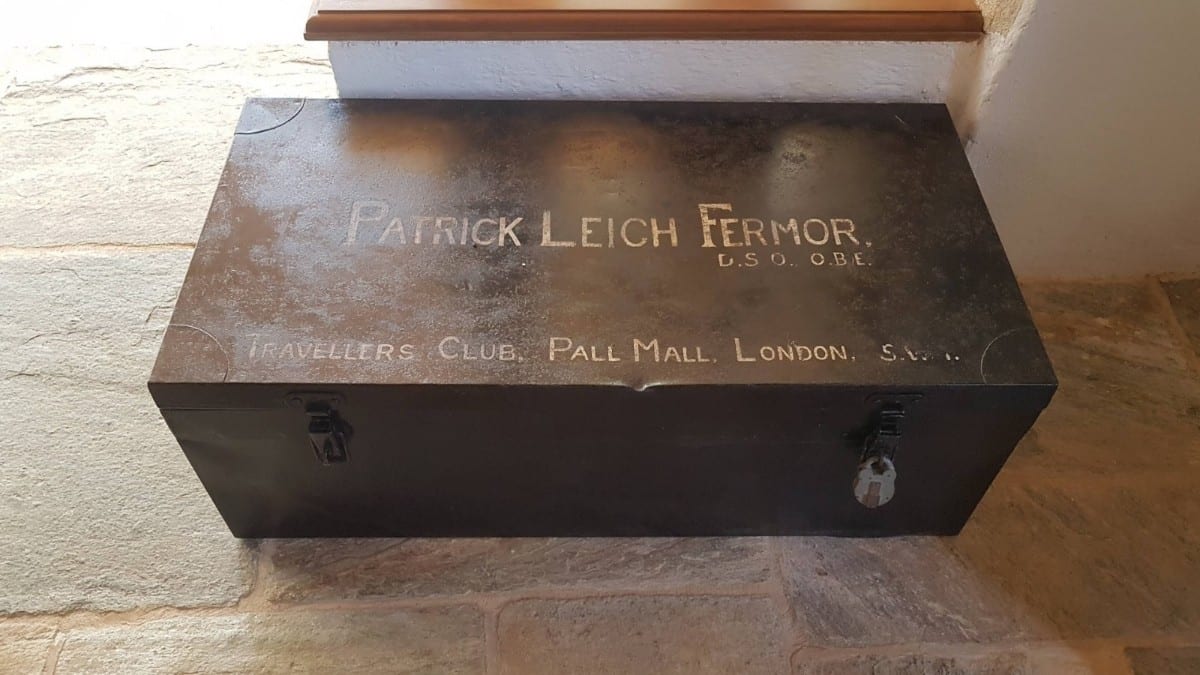 For anyone driving from Areopoli to Kalamata, I strongly recommend visiting the Patrick Leigh Fermor House in Kardamyli along the way. You'll find out more about this legendary adventurer and war hero who settled in the area and made Mani his home.

How to get to Areopoli

Areopoli is located in the southern Peloponnese. Some people choose to fly to the nearest airport which is at Kalamata, where they hire a car and then drive the 80 kms from Kalamata to Areopoli. This takes about 1 hour and 46 minutes due to the terrain and road.

Other people might choose to drive from Athens to Areopoli. The distance is a not insignificant 295kms, and you should expect it to take you about 3 and a half hours. There will be tolls on the main road along the way.

While Areopoli can be reached by public transport, having your own vehicle is highly recommended. There's really no other way to explore the whole area of the inner Mani.

Where to stay in Areopolis

There are a selection of places to stay in Areopolis, ranging from refurbished stone towers to modern apartments.

We stayed in an insanely spacious apartment at Koukouri Suites, just off the historical centre. If you are after something more atmospheric, Antares Hotel Mani is a great choice. 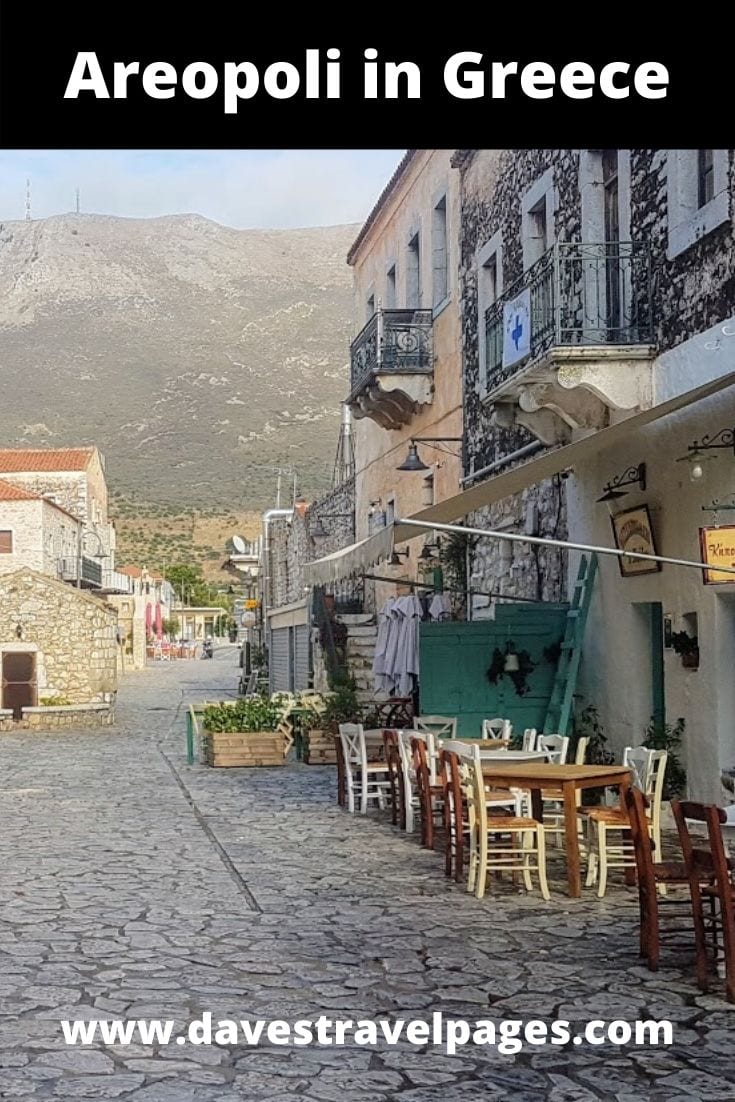 – Dave Briggs
Dave is a travel writer based in Athens, Greece. In addition to writing this travel guide to Areopoli Greece, he's written many more travel blog posts about destinations all over Greece. Follow Dave on social media for travel inspiration from Greece and beyond: