Last Updated On February 2, 2022 by Dave Briggs Leave a Comment

The village of Vathia is one of the most intriguing places in the Mani region of the Peloponnese. Here's everything you need to know about Vathia, the village of stone towers. 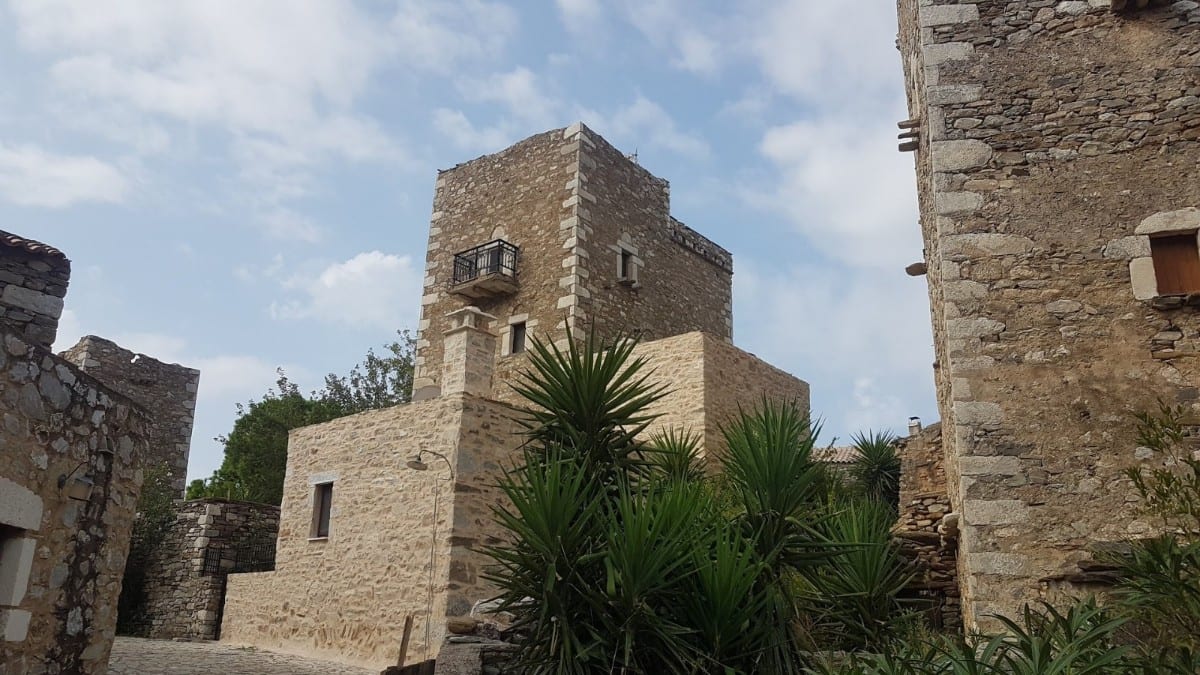 Vathia Mani in the Peloponnese Greece

The evocative village of Vathia is located in the Mani region of the Peloponnese of Greece. This small settlement of stone towers and abandoned houses almost became a ghost village, but in recent years, it has become one of the must-see destinations in the Mani Peninsula.

Few places in Greece are as unique as the Mani area in the Peloponnese. Looking at the map, the Mani is the middle peninsula to the south of this large, beautiful region. Its northernmost towns are Gythio, to the east, and Kardamyli, or possibly the Verga area, to the west.

This remote, wild area of Greece is known for its rugged, untamed landscapes and its stone tower houses. If you drive around the Mani you will see them literally everywhere. 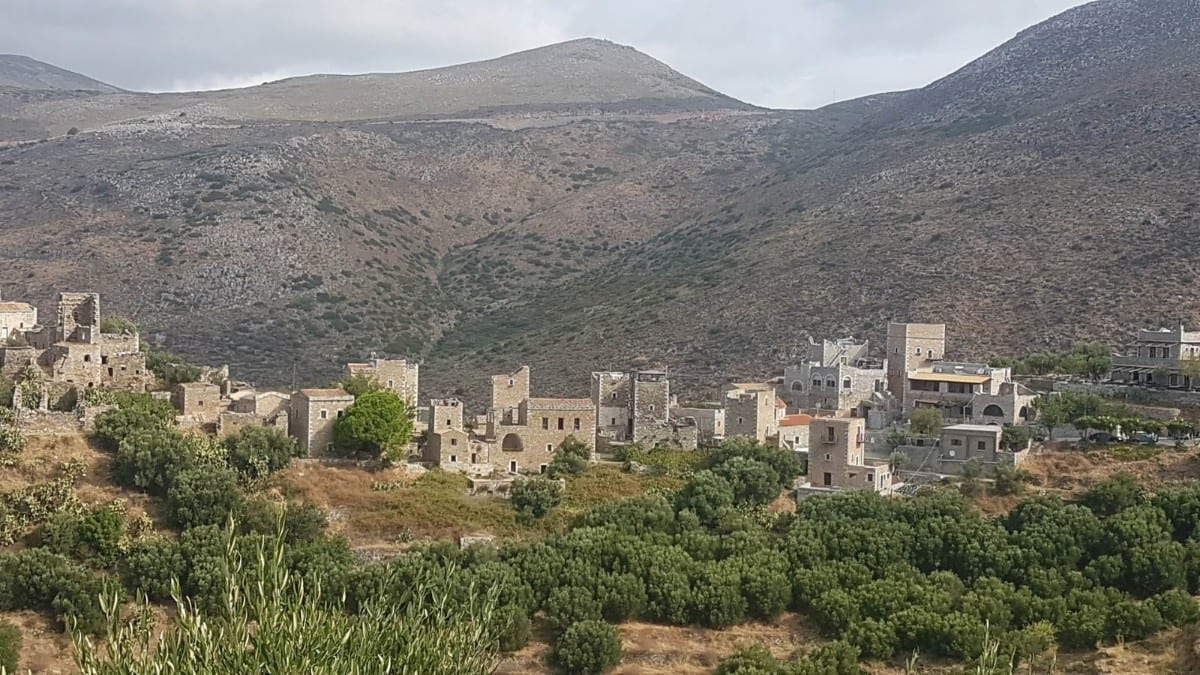 One of the largest and most imposing settlements of stone towers and houses is Vathia, located towards the south of the peninsula. Vathia is a must-see village if you are going to Mani.

How to get to Vathia

The Mani region has been known as a wild and inaccessible place for thousands of years, and to be honest, not a lot has changed!

There are no organized tours or a day trip running out to Vathia and the other villages in the area. This is a place you can only really reach by car (although a few hardy souls explore this area when bicycle touring in the summer!).

The closest airport to Vathia is at Kalamata, and you can rent cars there. Driving from Kalamata to Vathia takes about two and a half hours.

Many people who are taking a road trip on the mainland in Greece might rent a car in Athens. To give you some idea of the distance, it would take you about four hours to drive directly from Athens to Vathia.

I recommend RentalCars for booking a hire car online. If you've never hired a car in Greece before, check out my guide on everything you need to know about renting a car in Greece.

The stone towers of Vathia

Vathia is possibly the most photographed village in the Mani. It’s a large traditional settlement located on top of a hill, surrounded by olive trees. The views to the Aegean Sea are simply magnificent. 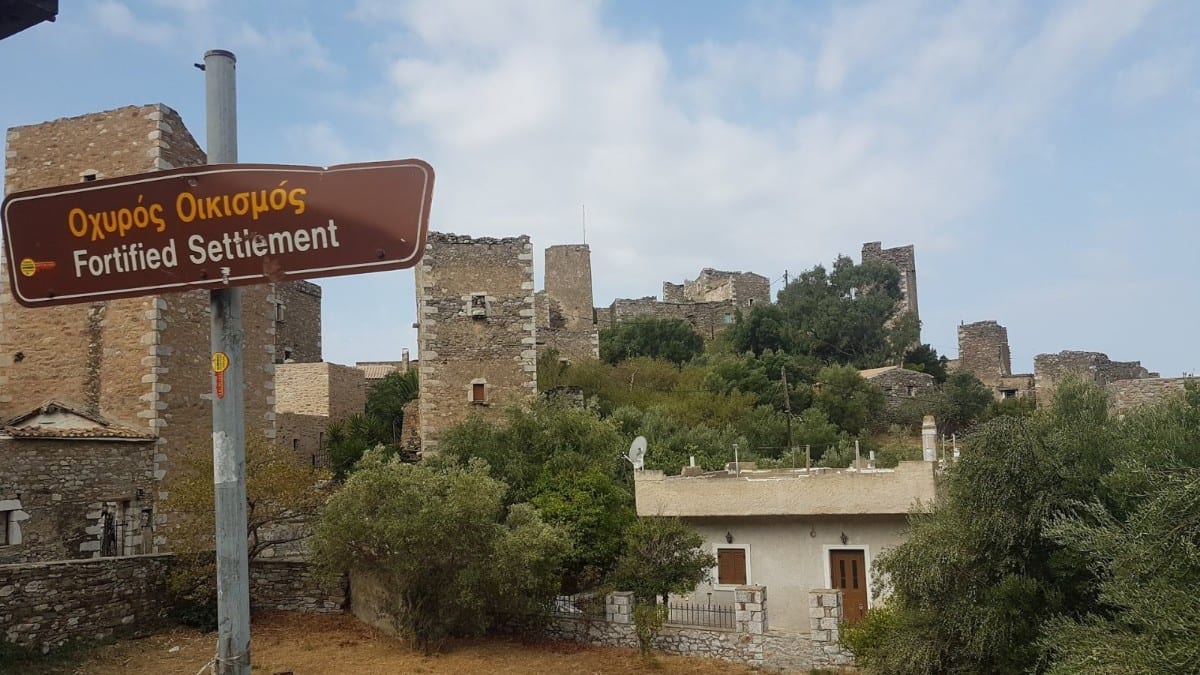 As the sign in the photo says, Vathia is a fortified settlement. The buildings are constructed close to one another in a defensive arrangement, and each stone tower is a mini-castle.

The stone towers of Vathia date from the 18th and 19th centuries. Like elsewhere in the Mani, the stone towers were mostly built to protect people during attacks by the Ottomans, the pirates and other intruders.

Why were the tower houses built?

As mentioned, the inhabitants chose this location which is 180 metres high and 2 kms from the seas to build the stone houses and towers for defense from attackers. There is also another reason though, as in fact, the towers were also a status symbol.

The taller the tower, the most important the family who owned it was. Maintaining the tower was regarded as a duty of the whole family, and not just the members that lived inside.

The most powerful families of each area would prevent other families from building any tower that was taller than their own. Several vendettas between families have occurred in the past, sometimes resulting in the destruction of stone towers. This was largely symbolic of the decline of the family’s power. 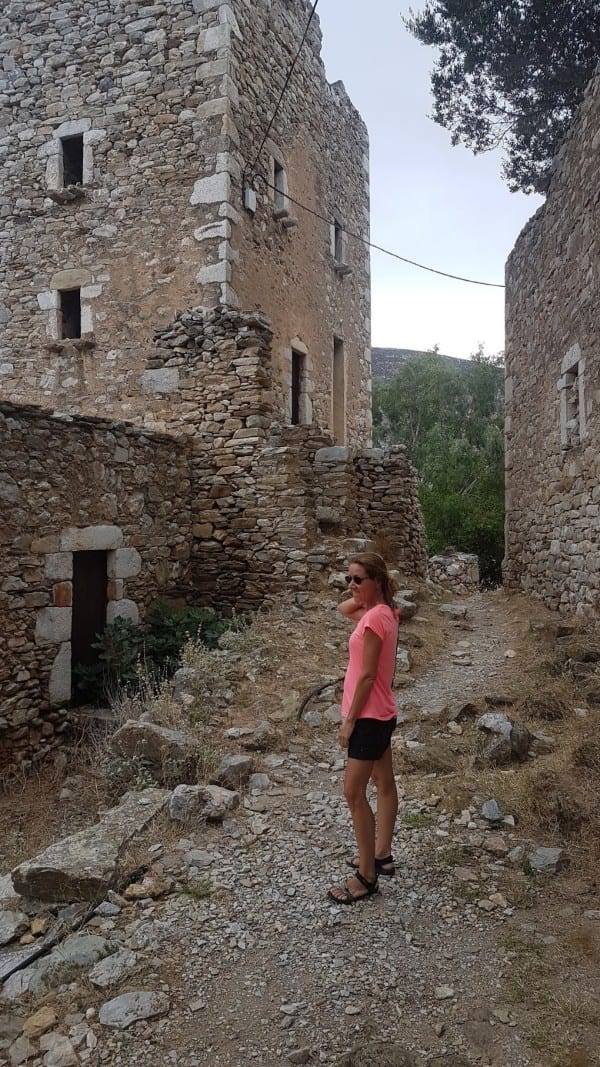 Vathia reached its peak in the 19th century, when around 300 people lived in the area. After WWII, many of the local people moved to the bigger cities, and a large number of the stone towers were abandoned. In 1979, the only residents of this remote area were 11 elderly women, and electricity wasn’t available yet.

Fortunately, quite a few of the Vathia towers were restored in the 1980s. Some of them have been transformed to traditional guest houses, and are still in use today.

As you are approaching Vathia through the winding mountainous road, you will be mesmerized by its beauty. The village is surrounded by the wild landscape, and it somehow blends in.

Park your car and start walking around Vathia. There are many stone houses of different sizes, including large towers that look almost like small fortresses.

Vathia has some of the most unique examples of the type of architecture that this part of Mani is famous for.

Walking up and down the cobbled streets, you will discover that while many of these houses look abandoned, some of them are inhabited. Some of them have been restored, and if you look carefully you will see signs of life.

At the same time, many of the towers are ruined and falling into pieces. There are many crumbling walls, and weeds and other plants have been growing inside them for ages. 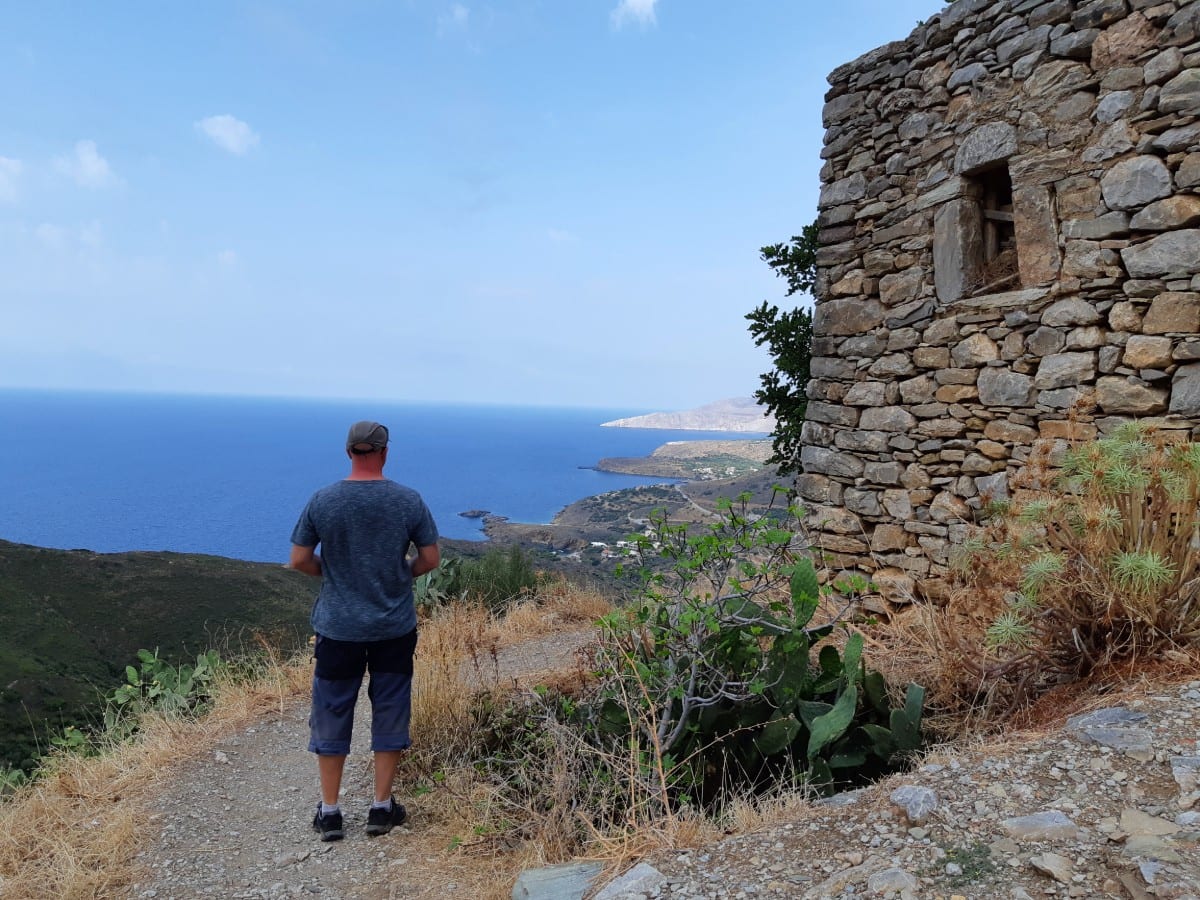 We spent about an hour walking around Vathia taking photos and didn’t meet a single soul. It was an overcast day, and the ambiance was dark, almost spooky. It would be interesting to see what it’s like at night!

The traditional tower houses of Vathia are square, and normally have two or three floors, although the largest ones would have had more.

The windows that they have are small, so they could easily be blocked up at times of conflict. Some of the doorways are set up off the ground to make approaching them harder and the towers easier to defend.

Despite its rich history, the village of Vathia was all but abandoned by the start of the 20th century like many villages in the area. In the 1980s, the Greek government put some investment in place to preserve Vathia before it completely became a ghost village.

Life slowly came back to Vathia a little as renovations on some properties took place in keeping with the Maniot architecture. Some became hotels and guesthouses and so now visitors can stay in this picturesque part of the world.

Where to stay in Vathia

Apart from walking around and exploring the crumbling towers, there isn’t much to do in Vathia, apart from a small taverna on the main road. If you like peace and quiet, Vathia is the perfect place to stay for a few days. 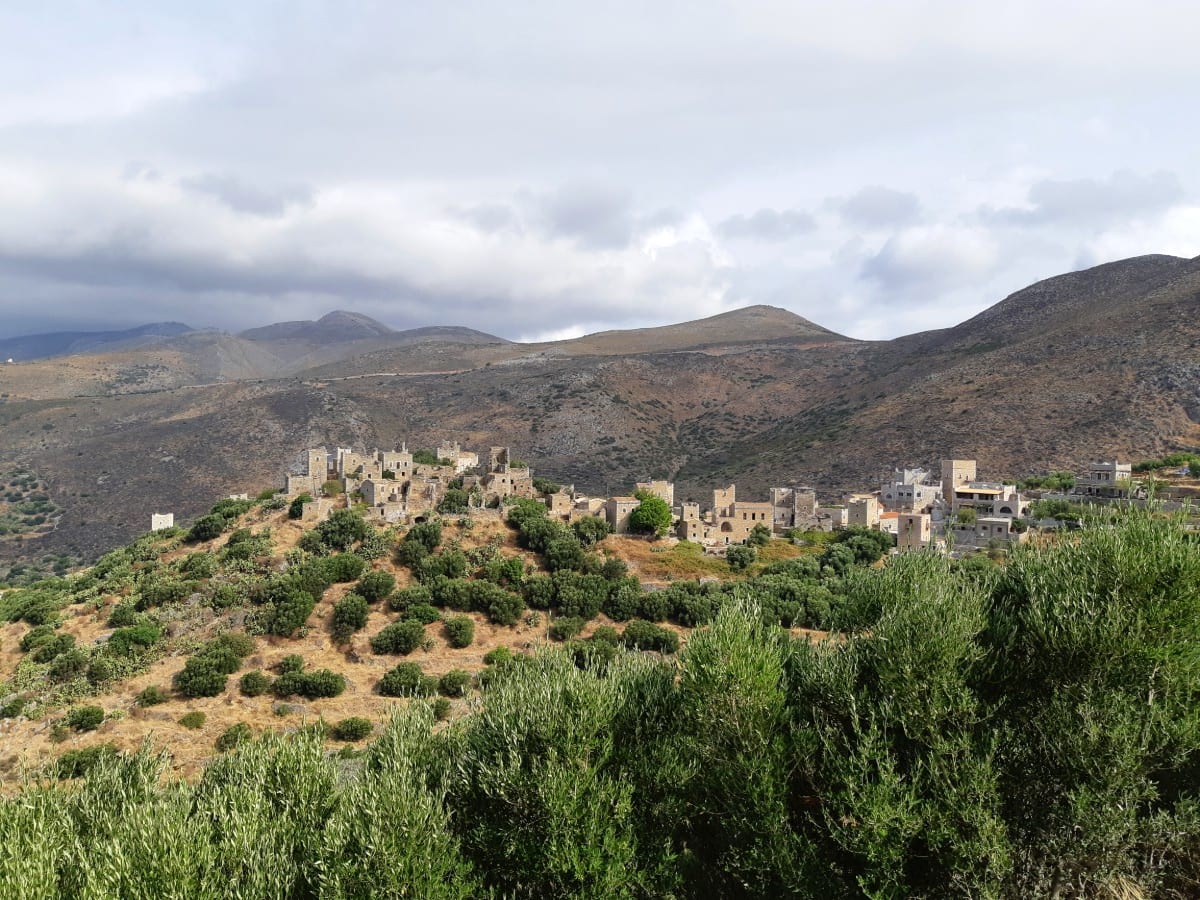 There are two beautifully restored towers where you can stay in Vathia. Both of them offer fantastic views to the area, and the perfect opportunity to relax and get away from it all.

Close to Vathia in the Mani

If you make it all the way to Vathia, you should also visit Cape Tainaron, the Gateway to Hades. This is continental Greece’s southernmost area, and you can hike all the way to the end, where there is a lighthouse.

Other places of interest include Areopolis and the small coastal settlement of Porto Kagio. We stayed here for two nights, and we really felt we had been away for ages! Porto Kagio has a pebbly beach, and you can also check out the beautiful, sandy Marmari beach on the other side of the coast.

You can plan more things to see and do in this part of Greece by taking a look at my travel guide to the Peloponnese. 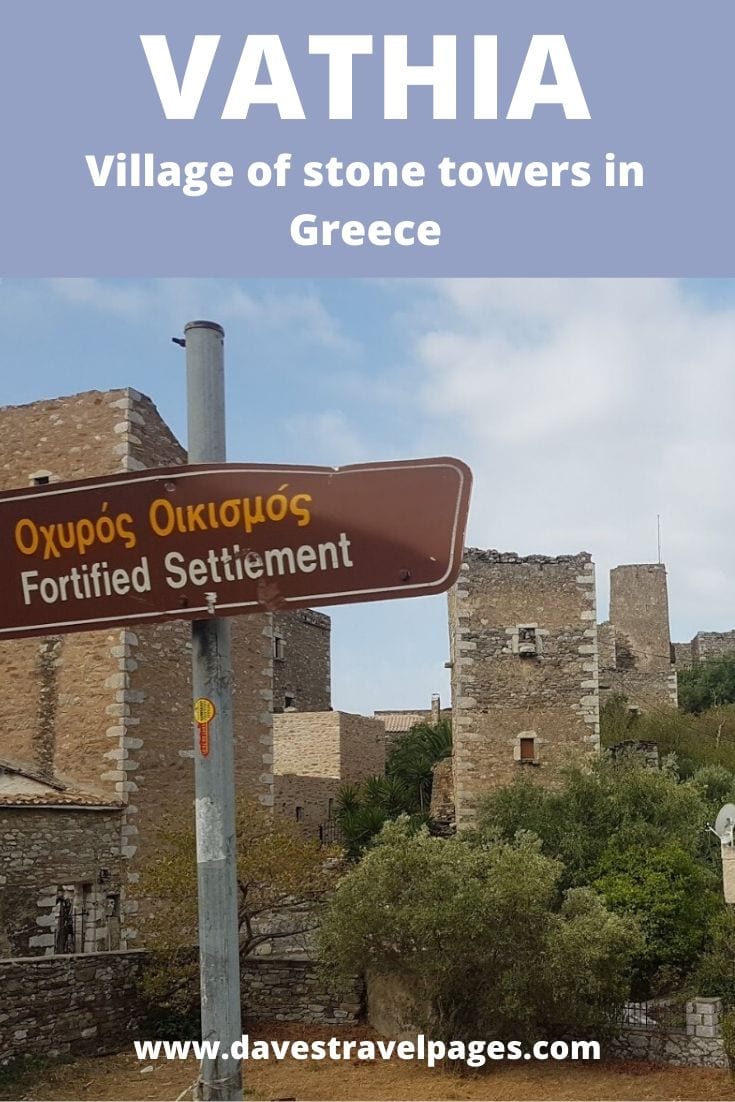 – Dave Briggs
Dave is a travel writer living in and writing about Greece. In addition to creating this travel guide about Vathia Mani Greece, Dave has also created countless other blog posts about destinations and things to see and do in Greece. Follow him on social media for travel inspiration from Greece and beyond: