Last Updated On October 26, 2022 by Dave Briggs Leave a Comment

After a couple of days working on a farm in Pemberton, it was time to resume the bike tour across Canada once more. Today, I cycled from Pemberton to Cat Lake.

Cycling from Pemberton to Whistler

Anna had left early in the morning to go to a farmers market, so we had said our goodbyes the night before. All breakfasted up, packed, and loaded, I left her a thank you note and set out.

Anna had kindly left some tubs of food to take on the road, so it was just a quick resupply in Pemberton, and then back out onto the main road to Whistler. There was a fair amount of climbing, but lifted by the last few days, it didn't really matter.

Whistler is going to co-host the 2010 winter olympics with Vancouver, and there is still some residual infrastructure work going on. I stopped in Whistler, to take my bike into a bike shop to get the cables and brake pads changed.

A girl there had been biking the Pacific Coast route that I plan to take in the USA, so I made mental notes whilst Matt from New Zealand worked on my bike. It was a good place, and they didn't charge me labour for the bike, just the parts – thanks guys and gals!

As for Whistler itself, well, its basically a tourist town, and I felt a bit out of place and couldn't wait to leave. That said, I think they will do a fine job hosting the Olympics, its just not my cup of tea. I'm more PG tips and that was a bit Earl Grey.

Cycling from Whistler to Cat Lake

With brakes that actually stop the bike, I set off towards the town of Squamish. On the way, I saw Anna and possibly Jennie (?) coming back in the other direction from the farmers market. Sorry if I didn't have time to wave!!

I planned to stop just short of Squamish at a forestry area called Cat Lake which I thought was free, but after negotiating a 3 km mud track, found cost 12 dollars. Still, it was a nice enough place, and I got a big camp fire going at night. 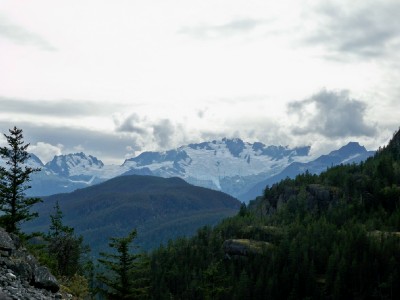 Note – On the way into Cat Lake, I saw a helicopter which had a man sitting on a platform underneath it. The helicopter was flying along the power lines, and the man was either testing them or cleaning them. Whichever it was, it looked a bit odd, and glad it wasn't me up there!! 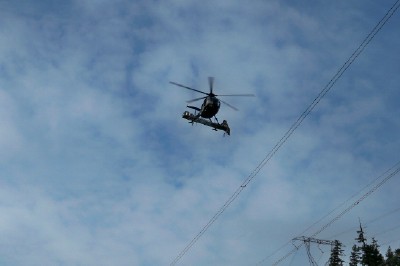 Use the links below to read more updates from these bicycle travels:

– Dave Briggs
Dave wrote this travel guide about Cycling from Pemberton to Cat Lake in Canada when cycle touring from Alaska to Argentina.