Last Updated On June 7, 2022 by Dave Briggs Leave a Comment

Few people ever make it to Porto Kagio, one of the southernmost villages in the Mani in the Peloponnese. If you're looking for somewhere at the end of the world, this is it! 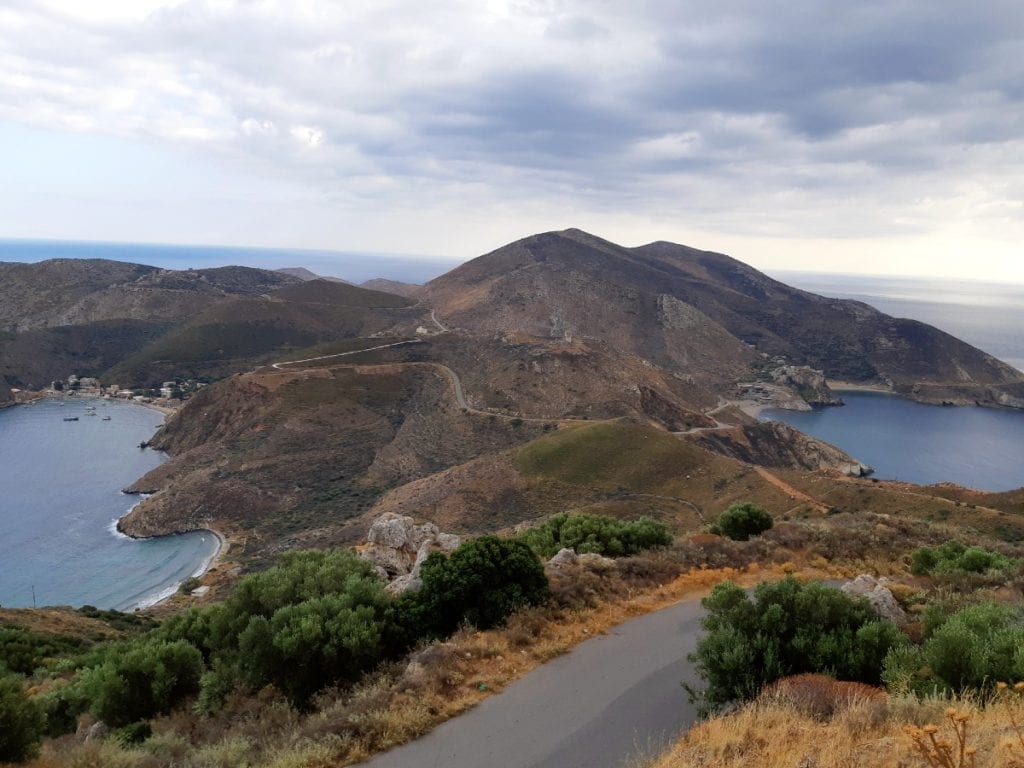 If you have decided to explore the unknown Greece and venture past the famous tourist areas, the Peloponnese offers quite a few options.

Perhaps the most unique and wild is the Mani peninsula, which is home to the southernmost point in Greece, Cape Tainaron.

Within the Mani Region you will find quite a few towns and villages, some more famous than others.

You may have heard of Stoupa and Kardamyli, where Patrick Leigh Fermor’s house recently opened to visitors. You may also have heard of Gythion, Areopolis and the impressive Diros Caves.

Few people, however, have heard of places like Limeni, Gerolimenas and Porto Kagio, which is all the way to the south of the Mani. A tiny village with just four small hotels, it is a very special place to visit, and perhaps spend a couple of nights.

If you look at the map, you will see that Porto Kagio is the last port on the way to Cape Tainaron, the southernmost spot of the Mani and all of continental Greece.

Porto Kagio has always been a very important port. The famous traveller / geographer Pausanias, who was active in the 2nd century AD, mentioned Porto Kagio in his writings. At the time, the port was known as Psammathous.

During the Ottoman Era, in 1568, a castle was built to protect the small port, but it was soon taken over by the Venetians. The castle was re-occupied by the Ottomans, and was later briefly surrendered to the Greek supporters of the Orlov revolt.

The Orlov uprising was part of the Russian-Turkish war, which took place in 1768-1774. It ended up in lots of massacre, but it prepared the grounds for the Greek Revolution in 1821. 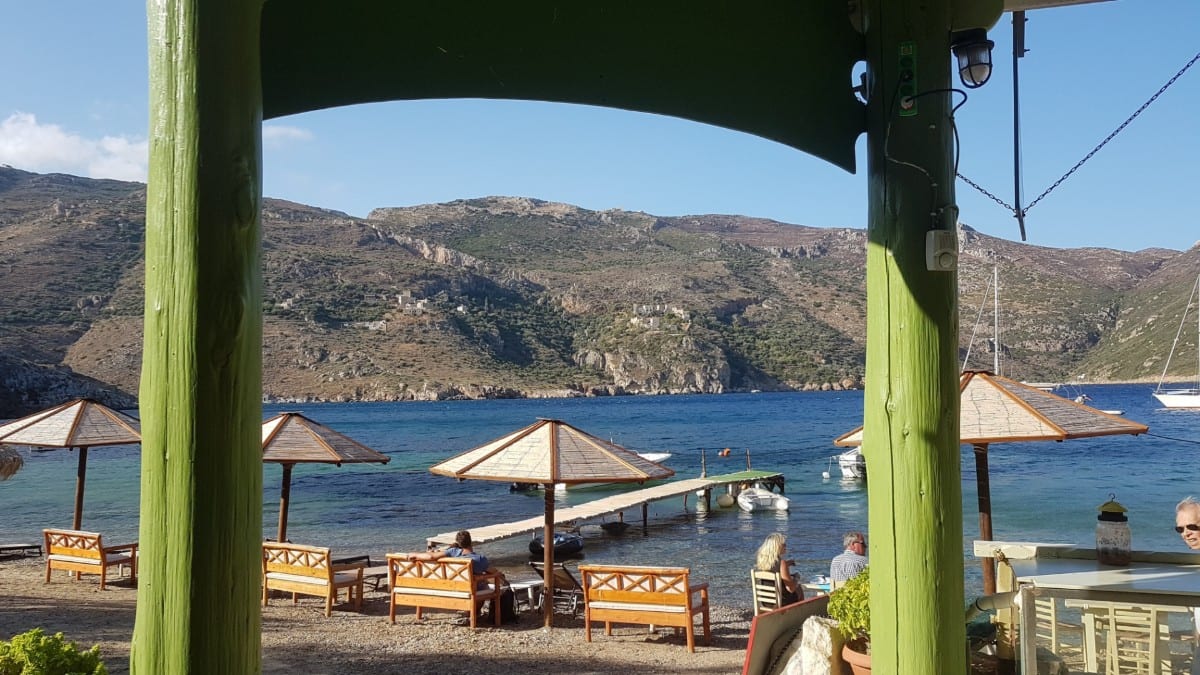 During the Ottoman Era, a number of people from the Mani became pirates. They were excellent sailors, and as such were notorious all around Europe for their skills. Allegedly, the British had founded a colony in Minorca’s Port Mahon, where they trained pirates who came from the Mani.

A famous pirate was Liberakis Gerakaris, who was active in the 1670s onwards. During and after the Orlov revolt, Lambros Katsonis sailed from port to port, looting Ottoman boats and trying to get the Greeks to start a revolution.

His fleet was eventually destroyed in Porto Kagio, in 1792. You can read more about pirates and corsairs in Europe here.

During WWII, a large number of British soldiers fled to Egypt from Porto Kagio. As for today, don’t worry – the pirates and soldiers are long gone. Numerous sailing boats dock at Porto Kagio’s beautiful natural port during the summer.

When we visited in late September there were very few sailing boats. The tiny coastal village was really peaceful and quiet, with just a few fishing boats going around the bay.

Things to do in Porto Kagio Mani

Porto Kagio is a tiny village, and there is very little to do, which is why it’s ideal if you want to relax. The pebbly beach is quite small, and there is not a lot of space to sit on.

However the water is clear and refreshing, and the area is great for snorkelling. The bay is fairly protected, even on windy days. 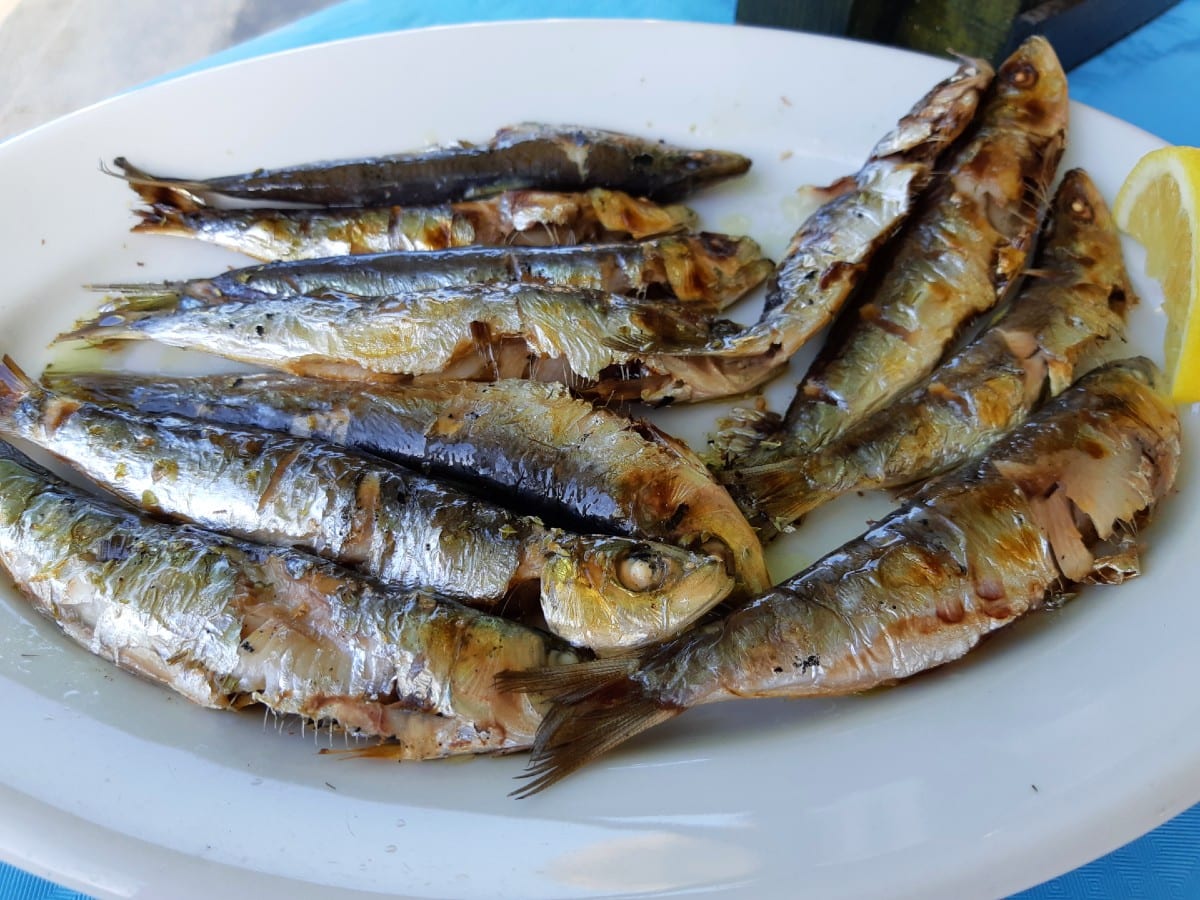 There are a couple of small restaurants, as well as a bar which was closed in late September. We went to taverna Akrotiri which had really fantastic food and fresh fish, so we returned for our second night there! 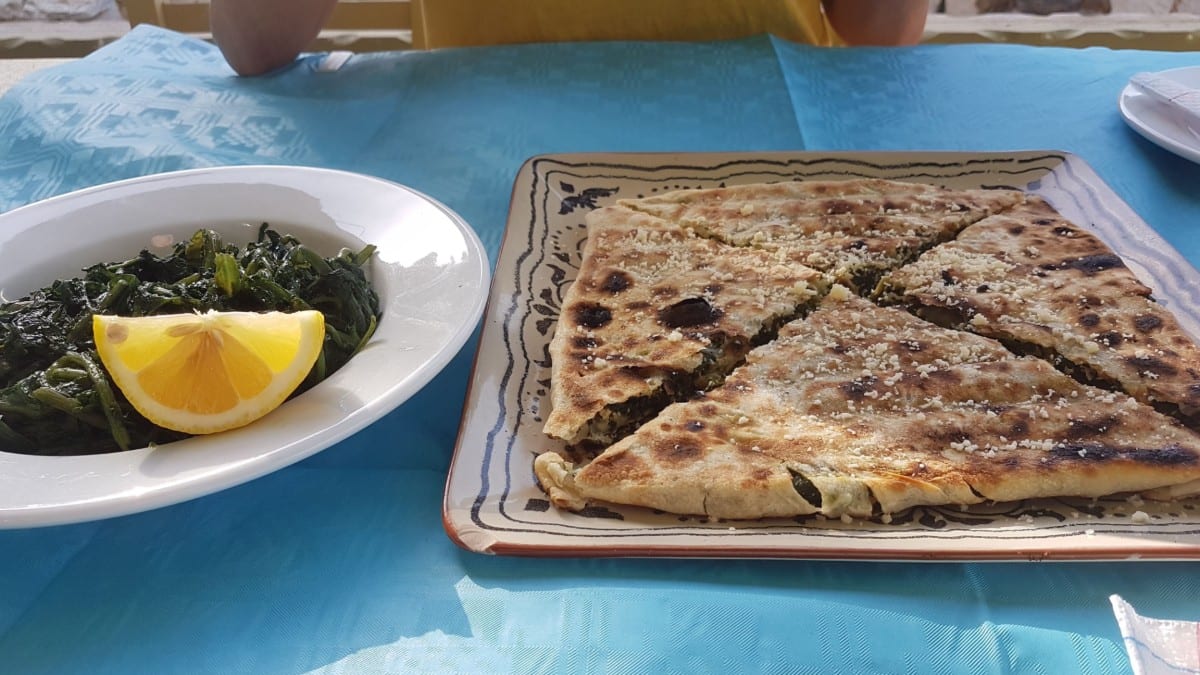 Porto Kagio has 4 hotels with no more than 40 hotel rooms in total, so if you are determined to stay there it might be a good idea to book in advance. We stayed in Castello rooms, run by a lovely senior couple. The lady was born in the area and she has some fantastic stories to share!

If Castello are fully booked, you can check out the nearby Akrotiri rooms

Note that there are no supermarkets or minimarkets in the wider area, so make sure you buy anything you may need from the markets in Gythio, Areopolis or Gerolimenas.

Things to do near Porto Kagio

On the way to Porto Kagio, you will pass by Vathia, the stone village. Allow some time to wander around the pebbled streets, and observe the stone towers, silent remnants of an era long gone.

Porto Kagio is a great base if you want to explore Cape Tainaron, the Gateway to Hades. You can get there by a short hike, which is suitable for pretty much everyone. Standing at the edge of the world is really cool! 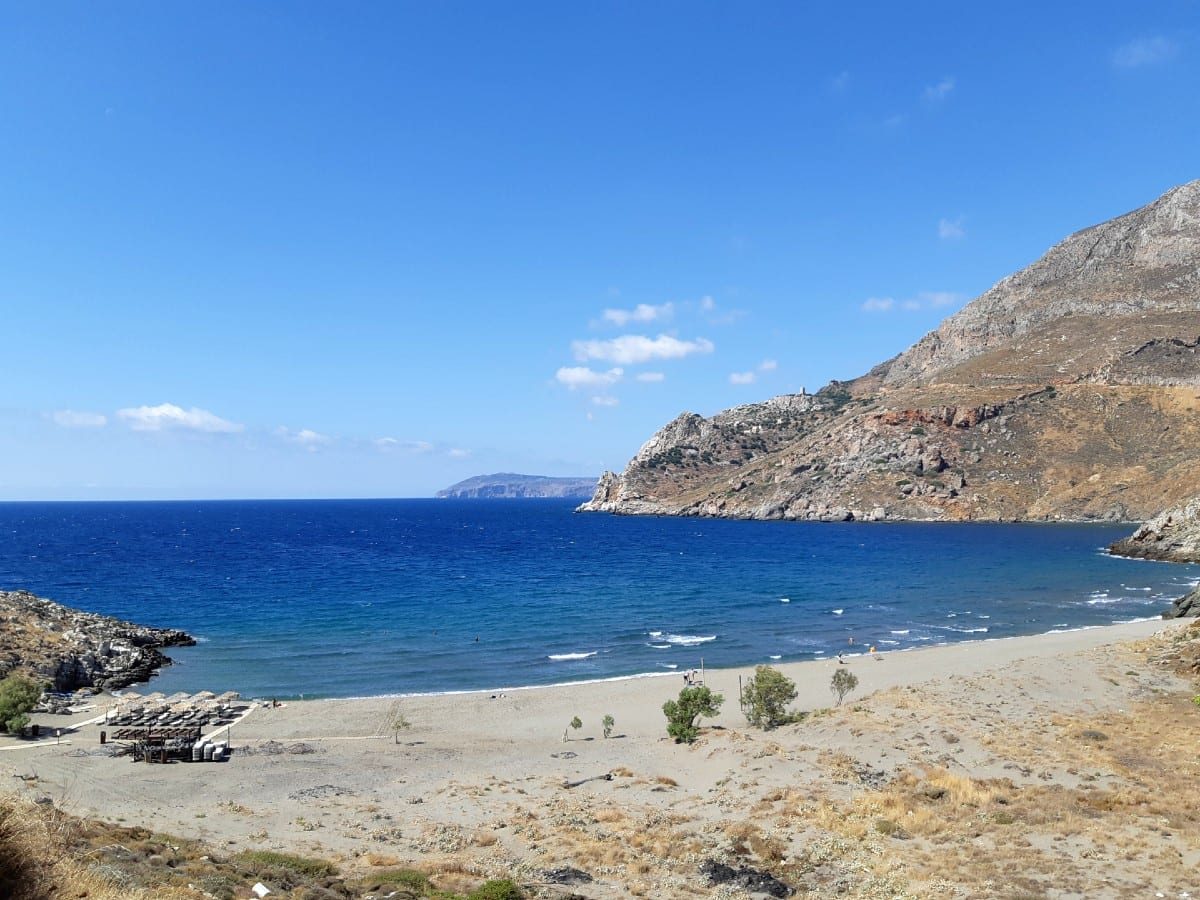 Make sure you get to the amazing Marmari beach, a long stretch of sand to the west of the Mani peninsula.

On the day we visited it was very windy, so we couldn’t swim, but we will definitely go back one day, if only to check out the sunset.

As you are driving back to the north of the Mani, take some time to park your car up on the mountain, and look behind you towards the end of the peninsula.

The image of the wild Mani, with Porto Kagio to the right and Marmari to the left, will stay with you, and you will definitely want to return.

Why should I go to Porto Kagio?

If you’ve been reading this blog for a while, you probably know that we like quiet places, off the beaten track. Even if you don’t have time to stay at Porto Kagio, we really suggest going all the way here.

This part of Greece is very different to anything else you have ever seen. It’s not just the stone houses, the winding roads and the ambiance. It’s also the actual terrain, with the low bushes, the dry rocks and the dramatic views. 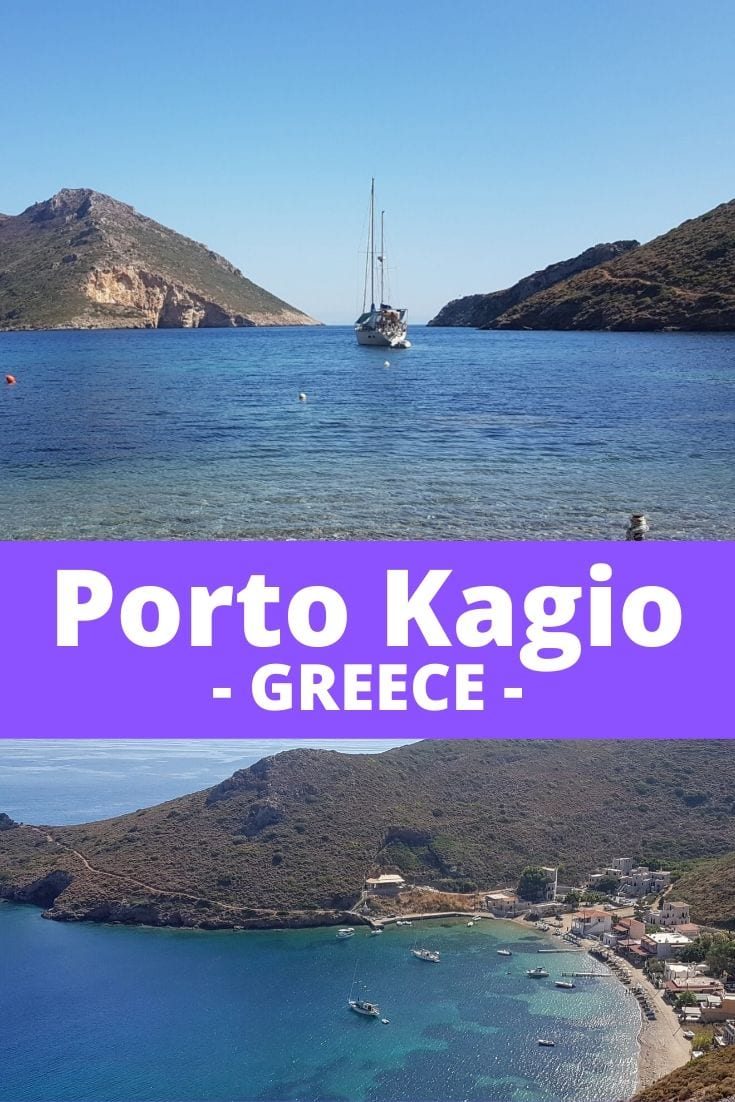 The southernmost part of the Mani is really pure wilderness, and it’s easy to see why it was once run by pirates. Spend a couple of nights here, and you will feel like you’ve been away forever!