While bicycle touring from Alaska to Argentina, I had made the decision not to spend too long in any cities. Especially potentially expensive ones like San Francisco in the United States!

This meant that I would miss out on the highlights of San Francisco, but at the same time, might actually have some money left to complete my 18 month long distance bicycle tour!

So, the plan on waking up in Samuel P Taylor State Park was to cycle through San Francisco in one day if I could.

I left Samuel P Taylor campground at just gone 9.00, and headed out. It always feels good heading to a major city with no maps, and only a vague idea of where I need to be, although it will be hard to top cycling into Damascus in the dark along a motorway.

At least in this case, I had a major landmark in the Golden Gate Bridge to head for!

Everything went fine for a while, apart from when I was going downhill and turned a corner, to find a motorcycle sliding across the road towards me, closely followed by its tumbling driver, which I just managed to avoid.

Both motorcyclist and bike seemed fine, so I carried on, asking directions along the way.

Cycling Across the Golden Gate Bridge

Reaching the Golden Gate Bridge on bicycle was not as easy as it might seem due to the confusing road network. Fortunately the Universe was working in my favour today. 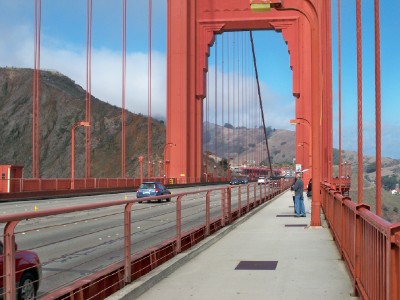 I met many helpful people, one who was Cooper, who showed me the way to the Golden Gate Bridge, and TJ, who showed me from the bridge and back out to the coast. Thanks very much guys, you made it all easy for me!! 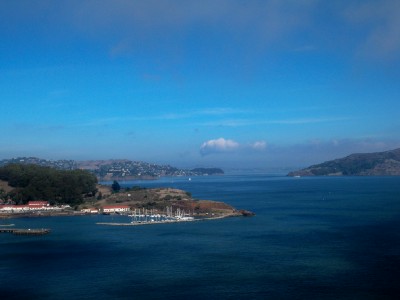 Once on the Pacific Coast Highway again, I had a few hotdog and coffee stops along the way, helping to keep the cyclists diet real. It was a long day!

On reaching Half Moon Bay, which is just south of San Francisco, I decided to stay in a hostel for the night.

It was handy to use the laundry and internet, and I don't have to spend another damp night in the tent with either toilet tissue or newspaper for a floor to mop up the wetness from where it leaks!!

The Point Montera lighthouse is a nice enough place, and it feels good to be in semi-civilisation. Southwards tomorrow, and it looks like I will be reaching Mexico in about 14 days at this rate.

I rode around San Francisco in 2009. Smartphones and Google maps were not really a thing then – wow, how much changes!

Adding this paragraph in 2022, you'll find it a lot easier to plan a bike route through the city. Apps like Komoot, Google Maps, and Garmin make a San Francisco bike ride a lot more pleasant and less stressful. Well, maybe a little less, in any case!

If I was to do it again, I'd probably plan on spending a couple of nights in the city, and use my time sightseeing as well as reequipping some of the bike touring gear that was underperforming.