After spending a couple of days in David, Panama, it was time to start cycling again. This blog posts covers the day's ride between David and San Felix in Panama.

Cycling out of David, Panama

I spent the last few days in the Purple House generally chilling out, reading some books in English, playing on the net (downloaded the season finale of Spartacus – amazing !), and eating.

In fact, I gained something of a reputation as a human waste disposal machine, being offered food from people who cooked too much!

I was also trying to arrange passage to Colombia with some recommended ship captains, but all to no avail unfortunately.

With it getting ever closer to May, I decided to push straight on to Panama City rather than spend time deviating from the Pan American Highway.

So, back on the road again ! The road was initially busy, but quietened down about 15 kms out of David. After 31 kms, the road gained a wide, smooth shoulder – ideal for cyclists! The general terrain was of rolling roads, but I made good time. 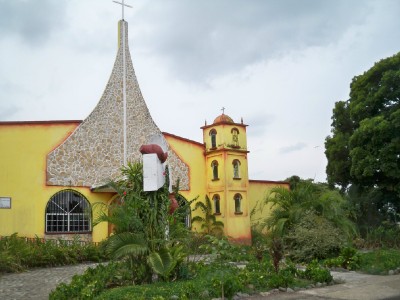 I arrived at the small town of San Felix, which was unsigned, and a few kilometres off the highway on the left hand side.

After asking around if there was anywhere to stay, I eventually found a place, also unsigned, which was 10 dollars a night.

The ride had taken a bit out of me after a week of virtual inactivity, and I had a two hour nap in the afternoon. All the rest I could get was needed, as I knew the next day out of San Felix to Santiago would be a tough one.