See the best of Rome in a day with this Rome 1 day itinerary suggestion. Dose up on cappuccino, and dive right in as we show you the best way to see Rome in a day. 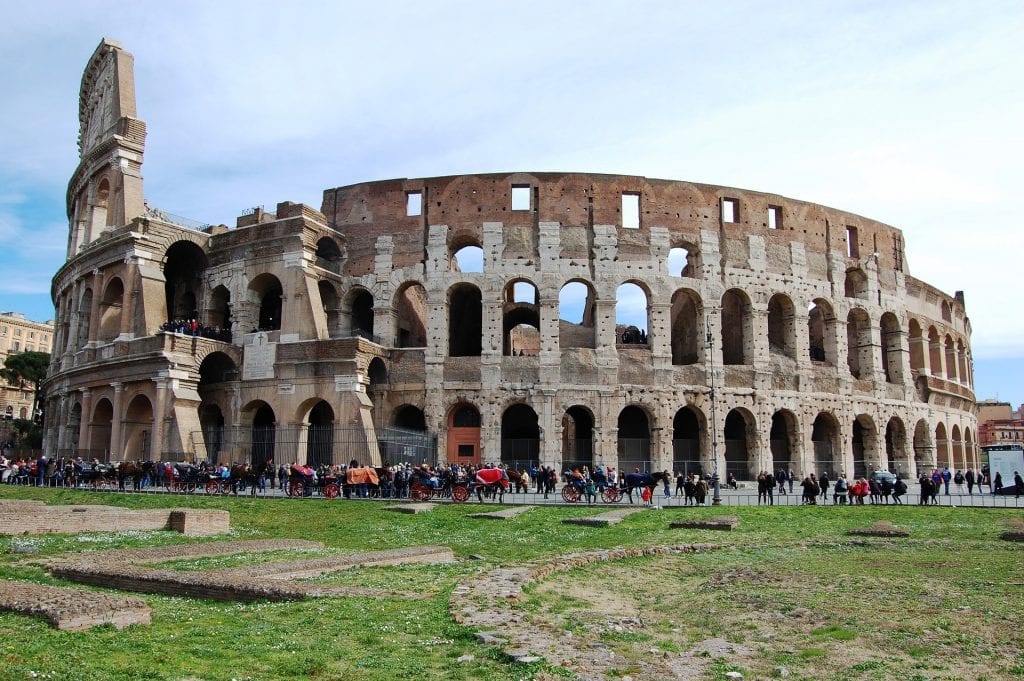 How To See Rome In Just A Day

Rome, the Eternal City, is one of the most visited cities in the world. Packed full of ancient sites, museums, galleries, massive squares and over 900 churches, there's an amazing sight at every turn.

In fact, there's so many attractions in Rome, that even getting your head around what to do in Rome can take a while!

If you only have 1 day in Rome, you've got an even tougher task ahead of you. It's obvious it will be impossible to see it all, and choosing which things to see in Rome and which to skip is a nightmare.

We've done some of the heavy lifting for you though, and put together a Rome one day itinerary that allows you to see the essentials, and gives a good idea of its highlights.

What to see in Rome in one day

Broadly speaking, the main sights in Rome date from two eras – Ancient Rome, and the Renaissance Period. Even with just one day in Rome, you could still get an idea of both eras.

Places to See in Rome in 1 Day

As such, we'd say that the must-visit places in Rome in one day include:

It doesn't sound a lot does it? Trust us though, this is perhaps even a little too much for 1 day in Rome! You'll still find yourself pressed for time, and wishing you had more.

The best way to see Rome in a day

This Rome 1 day itinerary gives a brief description of these important places to visit in Rome in 1 day. We've also included skip the line options so you can really maximise your time in the city.

Let's kick off the day in Rome by starting with the oldest sections first – After you've had a couple of cappuccinos though. You'll need them!

All Roads Lead To Rome

Rome was founded in 753 BC by the legendary demi-god brothers, Romulus and Remus, and has been continuously inhabited ever since. It was the capital of the Great Roman Empire, one of the greatest empires in the world, until its fall in 476 AD.

The civilization of Ancient Rome was really advanced in all aspects of life. These included architecture, engineering and technology, politics, law, religion, art and literature.

Excavations have revealed ancient roads, aqueducts, palaces and other large buildings and temples. We'll leave the debate as to how much of this was stolen/influenced by Ancient Greece for another day!

The Colosseum, the Roman Forum and the Palatine Hill constitute Rome’s main archaeological area and there is a combined ticket for all three. Entrance to the archaeological area is free on the first Sunday of each month, and as a result crowds are even bigger on those days.

While it is perfectly possible to visit Ancient Rome on your own, it is best to take a guided tour in order to skip the long queues at the Colosseum and understand more about the ancient ruins.

The Colosseum in Rome Located right in the heart of Rome, the Colosseum or Coliseum is the largest amphitheatre ever built. It was constructed between 72 and 80 AD, and it is estimated that it had a capacity of up to 80,000 people in ancient times.

A variety of shows and activities were presented, from theatre to gladiator fights to public executions.

These days, the Colosseum is one of the most visited sites in the world. There are several areas, such as the Arena and the underground corridors, which are only accessible if you have booked a special Colosseum tour.

It is possible to visit the Colosseum independently, but your experience will probably be less interesting, and you are likely to have to queue for a long time. The Roman Forum is a large rectangular plaza close to the Colosseum. Just like the Agora in Ancient Athens, it used to be the centre of life in Ancient Rome.

Temples, government buildings, market stalls, courts of law, monuments and statues were dispersed around the area of the Forum. This was where everything happened – meetings, commerce, speeches, trials, elections, military processions and gladiatorial marches.

It is possible that the area was functioning as a meeting place from as early as the sixth century BC, a couple of centuries after Rome was founded.

It was abandoned in the Middle Ages, and eventually buried underground, and was only excavated towards the end of the 19th century.

Today, all that visitors can see are the ancient ruins. A good tour guide will help bring the Forum into life and explain what it was like to live in Ancient Rome.

The Palatine Hill is one of the seven hills of Ancient Rome. This is the exact place where Rome was founded, and as such has a special significance for the Roman Empire.

Like the Roman Forum, much of what you can see in the Palatine Hill is ancient ruins, so unless you take a guided tour, or at least a guidebook and an audioguide, you won’t be able to understand much of its rich history.

And now it's time to jump forward in time to….

The Renaissance – Rome and the Vatican City People are often perplexed by the concept of the City of Vatican. Is it close to Rome? Is it a city within a city? A city-state?

The truth is that the Vatican City, which is located about 4 kms from the Colosseum, is the smallest sovereign country in the world, founded in 1929.

It is entirely separate from Italy, and is ruled by the Pope. If you are one of the people who love counting the number of countries they’ve visited, take this into account.

The Vatican City is home to the Vatican Museums and St Peter’s Basilica, which were built during and after the Renaissance period. Most tourists include them in their Rome itinerary.

In order to visit the Vatican City, you must dress appropriately. Shoulders and knees should be covered, and low-cut shirts are not allowed.

For security reasons, you will need to pass through a metal detector. Large bags, backpacks, suitcases and large umbrellas are not permitted inside the galleries, and can be left at the cloakroom free of charge.

If you are taking an organized tour note that there will probably be no time for you to leave your items, so just bring a small bag. It is probably impossible to offer any description that does any justice to the Vatican Museums, and it is equally hard to remember a Rome in a day itinerary that doesn’t include them.

The huge Christian and art galleries are home to thousands of superb artworks collected since their foundation in the beginning of the 16th century by Pope Julius II. They are among the largest and most visited museums in the world. Understandably, they can get quite crowded. 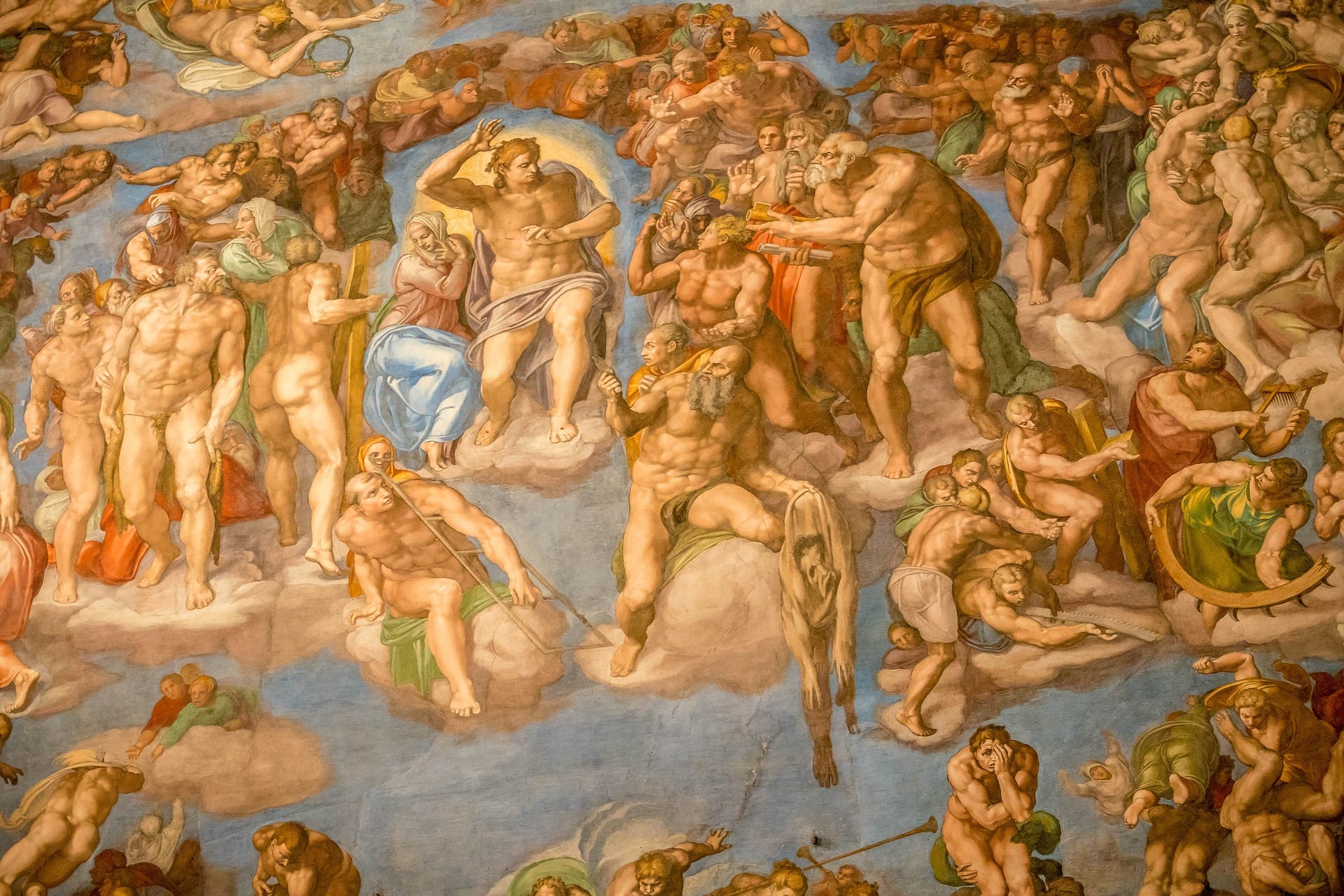 Arguably the most fascinating room in the Vatican Museums is the Sistine Chapel, an incredibly large gallery with the world-famous ceiling, hand-painted by Michelangelo, as well as several frescoes on the walls. This is a room included in all guided tours, and is generally the last stop in the Vatican Museums.

With 7 kms of corridors, you will find plenty of other fascinating artworks in the Museums, such as the statue of Laocoön and His Sons, the frescoes in the Raphael Rooms, the large Egyptian collection and the Gallery of Maps.

From the Sistine Chapel, a “secret” passageway leads you to St Peter’s Basilica. According to the latest information, as of 1st July 2019, this passageway is only accessible to people who are taking a guided tour.

If you visit independently, you will have to leave the Museums and then queue for a second time if you also want to visit St Peter’s Basilica. This is a big no-no if you only have one day in Rome.

The Museums are closed on Sundays, apart from the last Sunday of each month, when they are free to visit, and even busier than normal. They are also open after hours on Fridays from April to October, which could be a good option for visitors who only have 1 day in Rome.

The majestic St Peter’s Basilica, by some accounts the largest church in the world, is located right next to the Vatican Museums. Its construction was completed in 1626.

It is one of the holiest shrines in the Catholic religion, lavishly decorated with marble, mosaics, sculptures, bas-reliefs and gilded stucco artworks.

Crazy fact – the decorations on the walls are neither paintings nor frescoes. They are all mosaics, made out of tiny pieces. As the temple is not the seat of a bishop it is not a cathedral, but this doesn’t make it any less special.

Entrance to the main hall of the Basilica is free of charge, but there is crowd control and you might be denied entrance if the temple is too busy. It is also possible to visit St Peter’s Dome, as well as the underground area of the temple, for an entrance fee.

The crypts under the Basilica are home to the tombs of several Popes and other important people. It is only possible to visit the Necropolis beneath the temple through a special tour, booked well in advance.

St Peter’s Square, right outside the Basilica, is a massive, impressive open area. Every Wednesday apart from July, the Papal Audience happens here from around 10am – 1pm, and thousands of followers and curious tourists attend to see the Pope.

In winter, the Papal Audience is normally held indoors, in a hall next to St Peter’s Basilica. During the time of the Audience, the Basilica is closed. Note that, in order to observe the Papal Audience, you will need to reserve a ticket well in advance.

Are the sights in Rome best visited independently, or on a tour? As many of the sights in Rome are very popular, chances are that they will be quite busy when you visit. Here is where tours in Rome are useful, as you will enjoy a guided tour by a knowledgeable person while skipping the ticket lines.

If you only have one day in Rome, one or perhaps two guided tours are the best way to see the highlights.

If you wanted to include all the above sights in your Rome 1 day itinerary, you could start your day early, with an early Vatican Museums tour.

You could then enjoy some free time, before embarking on a Colosseum by night tour.

Another alternative if you only have one day in Rome, could be to start off your day with a comprehensive tour of Ancient Rome, and visit the Vatican Museums and St Peter’s Basilica later in the day, or even in the evening if you happen to be there on a summer Friday. You might also find these other travel guides useful when planning a trip to Italy and Europe.