Leaving from Watson Lake, I cycled on to a stretch of road known as the Cassier Highway. There were a series of road developments going on, which meant that there was a lot of mud when cycling!

It was still raining in the morning, although it was more of a constant drizzle than a continuing torrential type. Typical weather for cycling in the Yukon of Canada it seems!

Even so though, the day's cycling itself was actually pretty enjoyable. The first hour took me back to the junction of Highway 37, where I stopped off at Sally's Cafe and had the breakfast special – Highly recommended. Then it was on to the Cassiar Highway.

Also known as the Dease Lake Highway, the Cassier Highway in Canada is very scenic, passing through some of the most isolated areas of B.C. 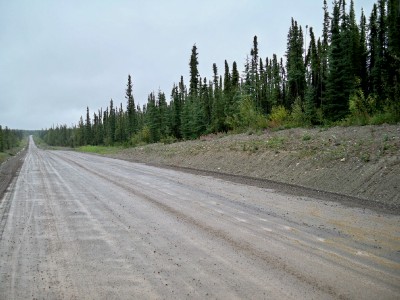 After the first 10 kms, there was a section of roadworks lasting for about 20 kms, which was a bit challenging because of the wet conditions, but nothing too bad.

Unfortunately, the rain never stopped all day, which was a shame, as it meant that visibility was minimal at about only one kilometre, so I'll never know if I missed some nice sights or not.

As it was, I just put my head down and got on with it.

I opted to stay at Boya Lake state campground, and do my usual not paying routine. However, they run their campsites slightly different here in British Columbia than they do in the Yukon, and have park attendants… apparently they don't trust people to use an honesty box… the cheek of it!

It ended up being 15 dollars which was a bit gutting, considering I had paid 10 dollars a night in Watson Lake and had internet access as well. Still, it was mission accomplished, and another 100 km's clocked up.

Use the links below to read more blog posts from this cycling trip:

– Dave Briggs
Dave wrote this travel guide about cycling from Watson Lake to Boya Lake when cycling from Alaska to Argentina.