Last Updated On January 16, 2022 by Dave Briggs Leave a Comment

During my time cycling in Canada, I managed to work for a couple of days at a farm. It was potato harvest time, and so I joined in! All good fun – you never know what you will end up doing on a bike tour! 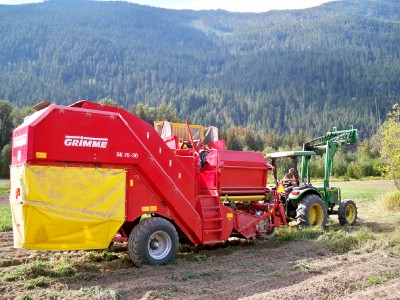 As you know from the previous blog entry, I had arrived in Pemberton and was staying with a Warmshowers host. One conversation led to another, which resulted in me working on a potato farm for a couple of days!

Anna left earlier in the morning to jog to the farm, so I had porridge and a couple of cups of coffee, and set out on my bike. A slight problem arose, when less than 400 metres down the road, I managed to get a flat tyre. What tremendous timing!

I headed back to the house, and did one of my quickest inner tube changes in just less than ten minutes, before getting back on the road again.

It was about a half hour cycle ride, and after being introduced to Jeanette and Doug (Mum and Dad), and Jennie (sister), it was time to start work.

They run an organic potato farm www.helmersorganic.ca and the bulk of the work that I did, was to harvest and then wash and sort potatoes.

Heading to the fields

After cycling over to the field, it was up and onto the back of the harvester shown above.

Doug slowly drove up and down the rows of potatoes, whilst in the back of the harvester, the rest of us sorted the potatoes from the clods of earth and grass that the rotavator dragged up onto the conveyor belt. 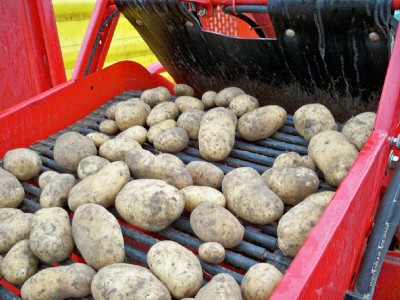 This meant that only potatoes went into the harvesters container, which held about three tonnes worth. When this was full, it was back over to the farm, where the potatoes were tipped into a hopper, and then fed through the washer.

After washing, the potatoes were sorted into three different sizes by the machinery, and we had to swap over trays and stack as they came through. All these trays eventually went into the chiller for storage, and they will then be sold throughout the year at farmers markets.

All this, even the small part that I saw of it, is quite labour intensive.

The next time you see an organic selection of vegetables and question the price, consider not only that they are more nutritious and taste better, but also that you are supporting enterprises that have taken a brave philosophical stance over the way that food is grown and are working as harmoniously as possible with the world we all share.

After lunch, we did a second smaller harvest, and when that was all washed and stored, I did a few odd jobs around the farm. It felt good to be useful!!

It reminded me a lot of my time working in Keffalonia, and experiences like this are both inspiring and rewarding.

A beer in the shade rounded things off nicely, and although I was offered a couple of weeks work at a neighbours farm, I had to decline, as I feel the need to continue south before the weather becomes too unkind.

There was another days work at the farm to do the next day though, so a good sleep was in order!

– Dave Briggs
Dave wrote this travel guide about farm work in Pemberton Canada when bicycle touring from Alaska to Argentina.