Bratislava for a weekend break

The Old Town of Bratislava is packed full of historic buildings, museums, shops, restaurants and bars, and it has an easy, laid-back vibe. Best of all, you can see all of the main Bratislava attractions in 48 hours, at a relaxed, unhurried pace.

Getting to Bratislava Slovakia

Milan Rastislav Štefánik Airport, or Bratislava airport as it is more easily known, is an international airport located just outside of the city centre. There are flight connections with dozens of European cities, and UK travellers will be well aware that Ryanair runs flight to Bratislava from some key UK airports.

Taking bus number 61 from the airport into the city centre is the cheapest way to travel into Bratislava city center at 1.20 Euro a ticket. A Taxi is by far the most convenient option though, especially for 2 or more people traveling together. You can pre-book a taxi here: Welcome Pickups

Things to do in Bratislava

Bratislava is the capital of Slovakia, and is located next to the River Danube. Just 70 kms away from Vienna in Austria, and 200 kms from Budapest in Hungary, it seems somewhat overshadowed by its more well-known neighbours.

That's a real shame, as it has a great deal to offer, and as a more compact city, can easily be seen within 2 days. It also has some well priced accommodation, which you can find out about in Where To Stay In Bratislava.

Some of the places to see in Bratislava include:

Why I loved Bratislava 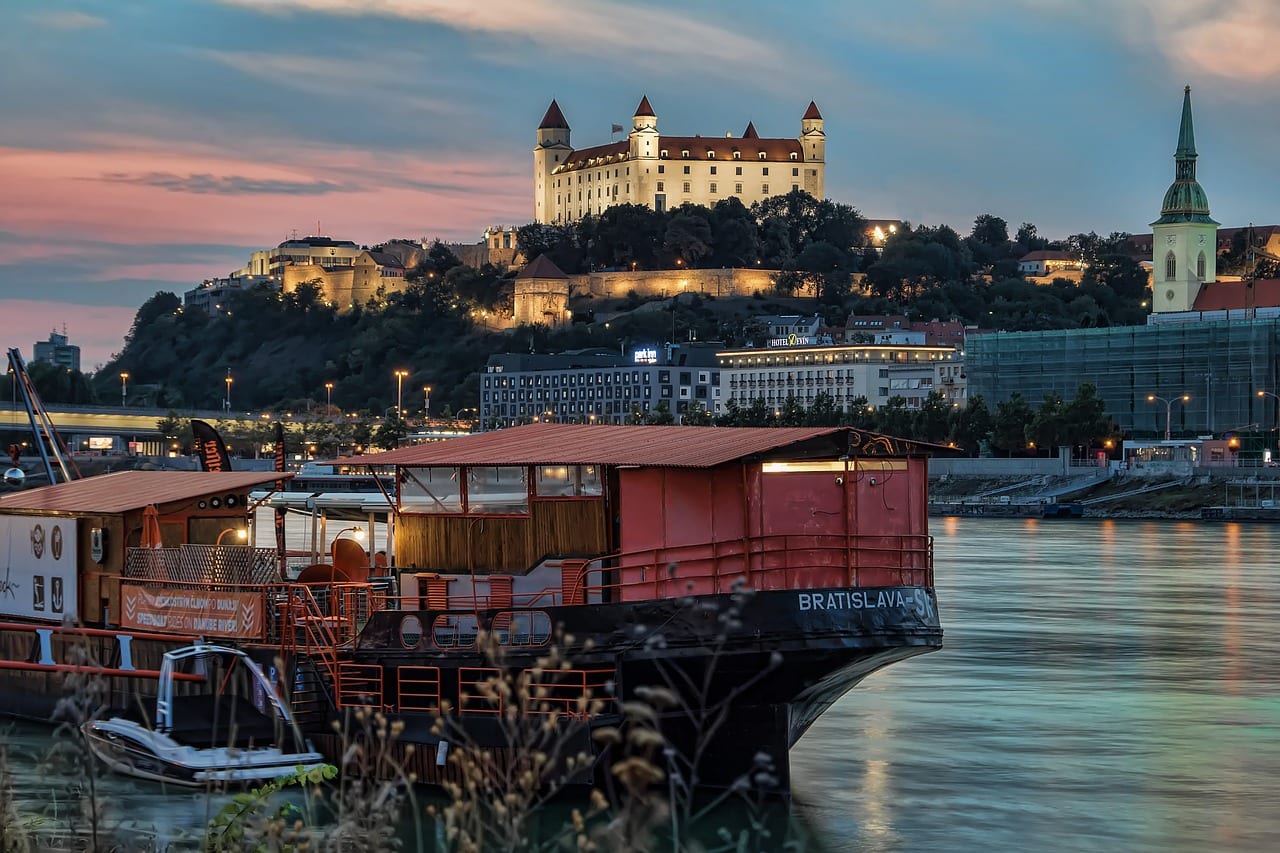 Most of the places to visit in Bratislava are clustered around the Old Town section, next to the Danube.

Visiting in June 2016, I was pleasantly surprised at the absence of tourist crowds, especially having been very disappointed by Dubrovnik in Croatia a month earlier.

In short, I found Bratislava to be the perfect European city to take a weekend break. Here are just some of the things you can see and do in 2 days in Bratislava.

What to do in Bratislava in 2 days

These places to see in Bratislava are listed in no particular order. In the Old Town section of the city, the aim is to really just wander around, and let buildings and attractions reveal themselves to you.

The ones that I have listed outside of the historic centre, you may need to see in a way which makes the best use of your time.

Most of the Bratislava tourist attractions are either within the centre or just outside, and can be reached entirely on foot.

We covered about 8 kms a day just wandering around checking out the Bratislava sights, which included the walk into the centre and back from our hotel.

If walking everywhere is not your style, or you are pushed for time, there are numerous buses and trams you can use. There's also various Bratislava city tours and experiences on offer.

Bratislava – Things to see in the Old Town

Part of the attraction of the Old Town of Bratislava, is just wandering around and soaking up the atmosphere. The main attractions I will list later, but there are countless old buildings, architectural gems, statues, and monuments to be discovered.

This is also where most tourists will come to eat and drink. Prices can vary in the area. You can still find beer for less than 2 Euros a pint, and meals for less than 7 Euro if you look hard enough. Ice cream is a real bargain here, and is just a Euro for a cone! 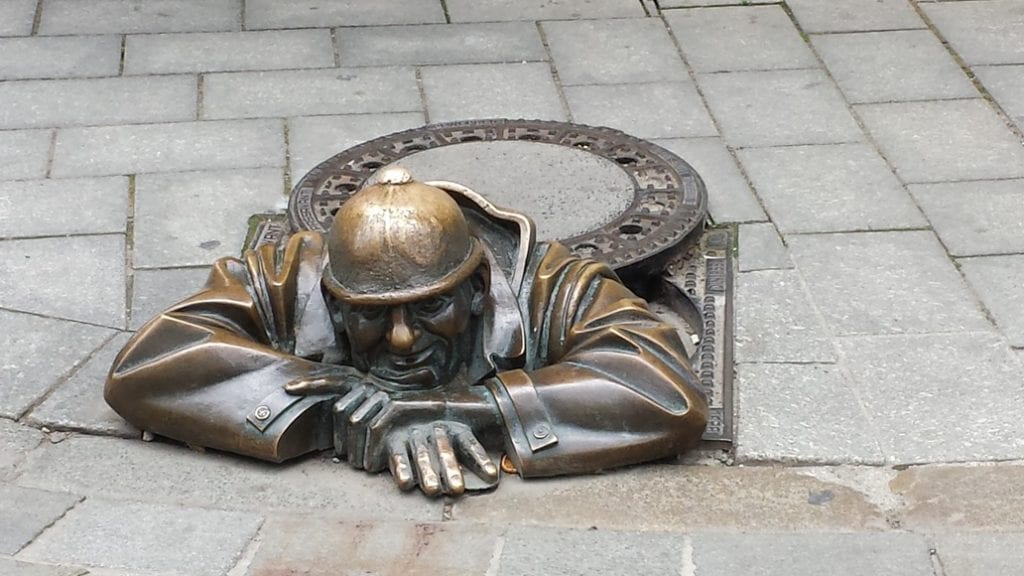 Considering the centuries that have passed, and the wars which the city has endured, it's amazing that so many historic buildings have survived at all.

This little area has some of the best, and St. Michael's gate dates back to the 15th century, although its current appearance is mainly from the 1700's. 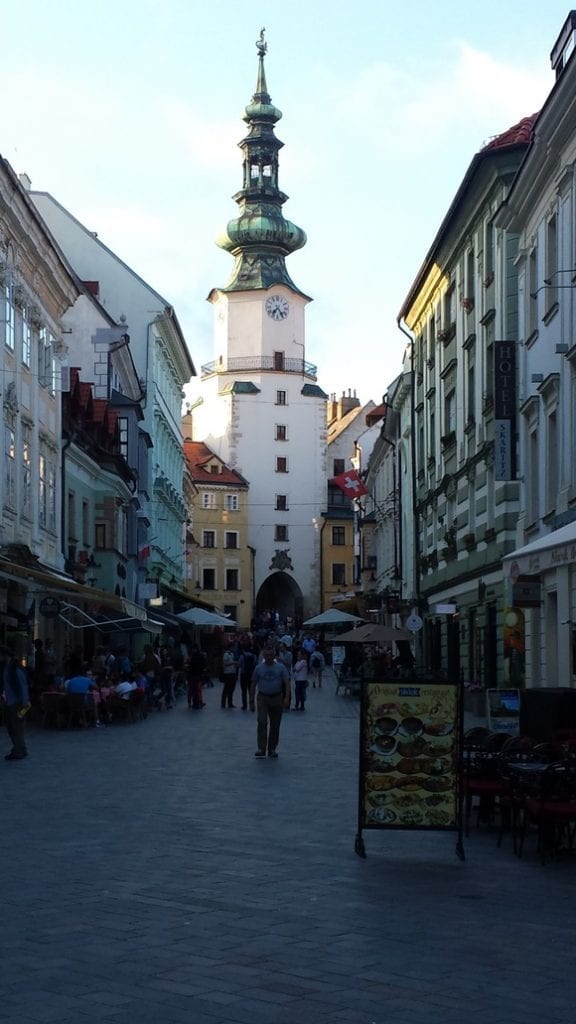 There are more museums and art galleries to see than you could possibly visit in 2 days in Bratislava! Take a look here for a list of the Best Museums in Bratislava.

My personal favourite was the Nedbalka Gallery, which had an outstanding collection of 20th century Slovakian modern art. 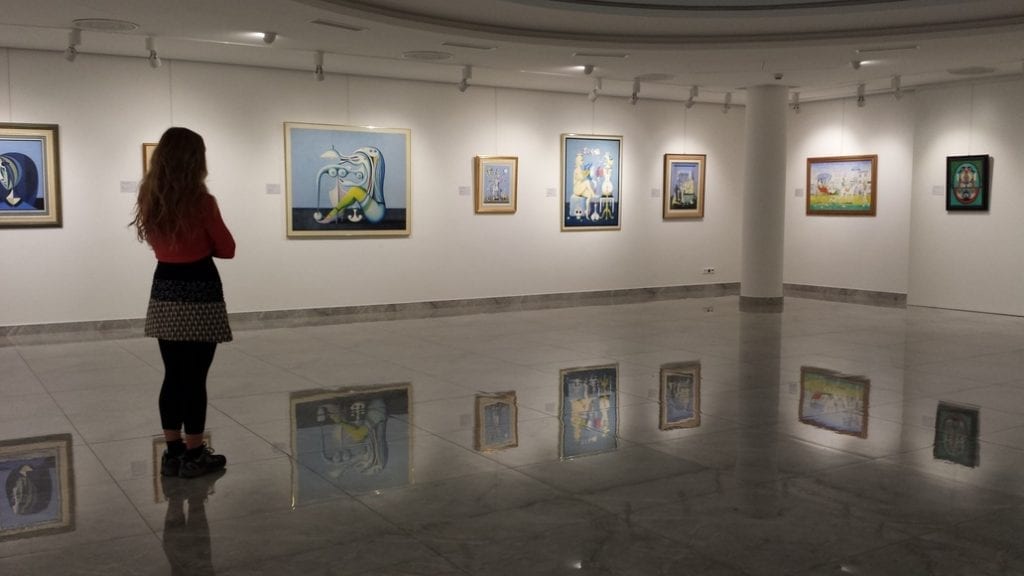 This is the most important Gothic building in Bratislava, and is a huge building. The inside was not as elaborate as you might imagine from the outside, but it is certainly worth a brief visit all the same. The nearby underpass and bus station has some cool street art. 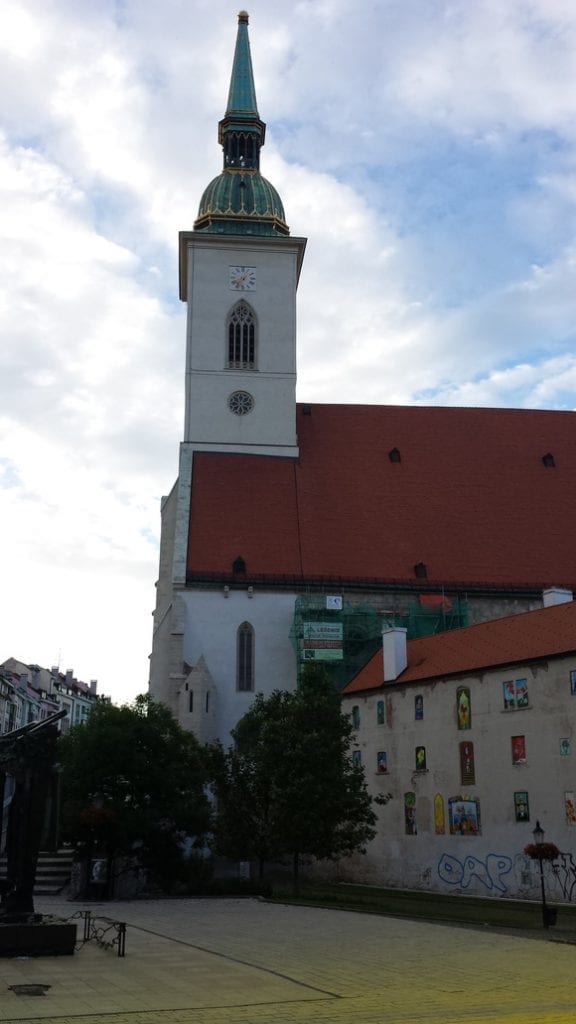 This is found at the very centre of the Old Town, and is impossible to miss during a 2 day visit to Bratislava. An architectural gem on the outside, the inside of the Primate's Palace in Bratislava is filled with oil paintings, chandeliers and tapestries.

The Church of St. Elisabeth is located on the eastern edges of the Old Town section of Bratislava. As its nickname suggests, the church is blue. Very blue! It's definitely worth the stroll out to see. 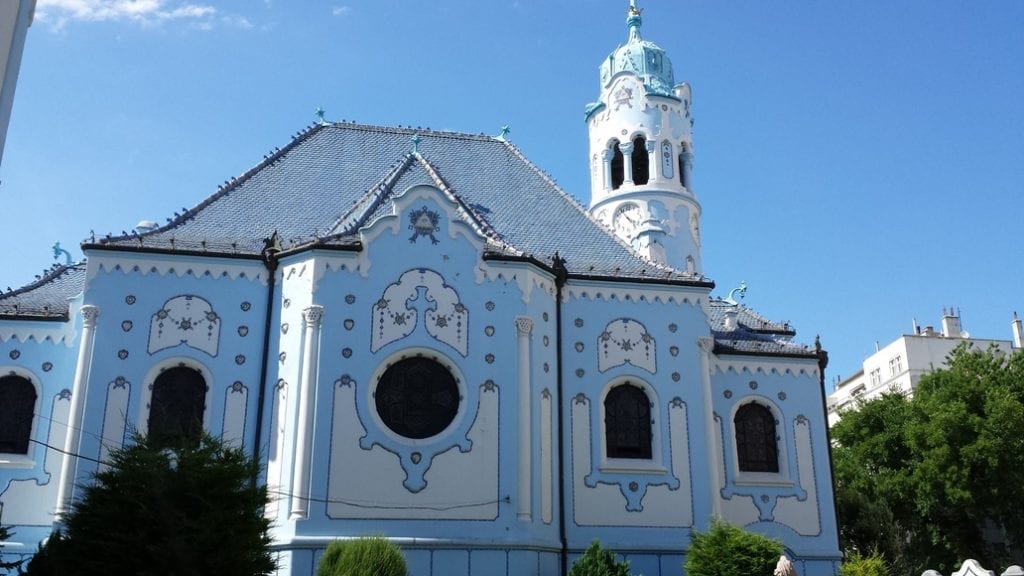 What to See Outside the Old Town when visiting Bratislava

Outside of the old town section of Bratislava, there are a number of other places of interest to see.

It can be a bit of a hike up to the Slavin Memorial, but one that I recommend if you are visiting for 2 days in Bratislava.

It is a sobering reminder of the sacrifices made and hardships endured during World War 2.

The memorial area also has a strangely peaceful feel to it, and gives some amazing views out on the city below.

We walked from the Slavin Memorial towards the Bratislava Castle.

It's fairly straightforward even without a map – you can follow Havlickova street which is then renamed to Misikova street and then to Timravina street. Finally, turn left on Sulekova street and you will come across Cintorin Kozia Brana Cemetery on your right hand side.

The entrance of the cemetery is on Sulekova street. Right before the cemetery, we found an amazing old building.

The cemetery has an eerie but quiet calm about it, and many prominent Slovakian academics from the 1800's are buried here. This might not feature in everyone's itinerary of what to see and do in 2 days in Bratislava, but it should! 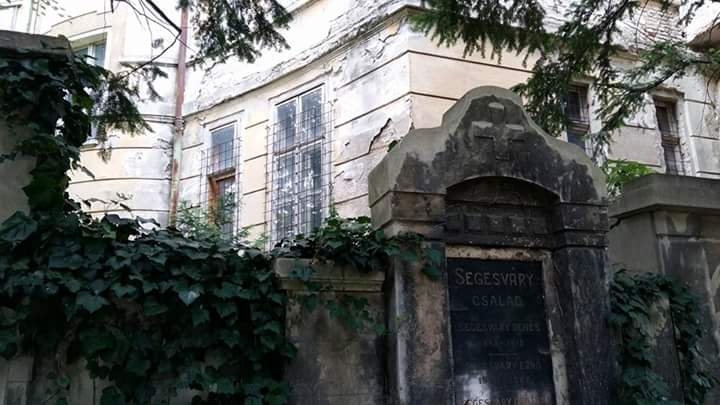 The image that features on many promotional shots of Bratislava is the castle.

Situated just outside the Old Town area, it sits high above the Danube, dominating the land beneath it.

Defensive structures and settlements have been in place here since the stone age, and today it is a monumental white painted building with four towers.

From a distance it looks very impressive, but on closer inspection much if not all of the castle was reconstructed in the 1950's.

This takes something away from its splendour, but there is no denying that the views from Bratislava castle are terrific.

There are also a number of exhibitions you can pay a fee to see (if you can find where to buy a ticket!). 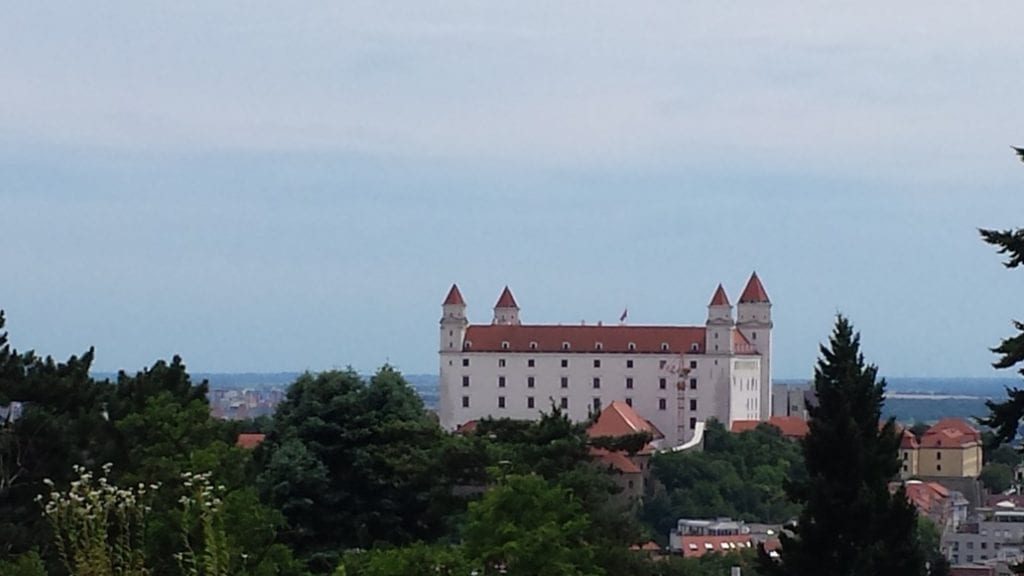 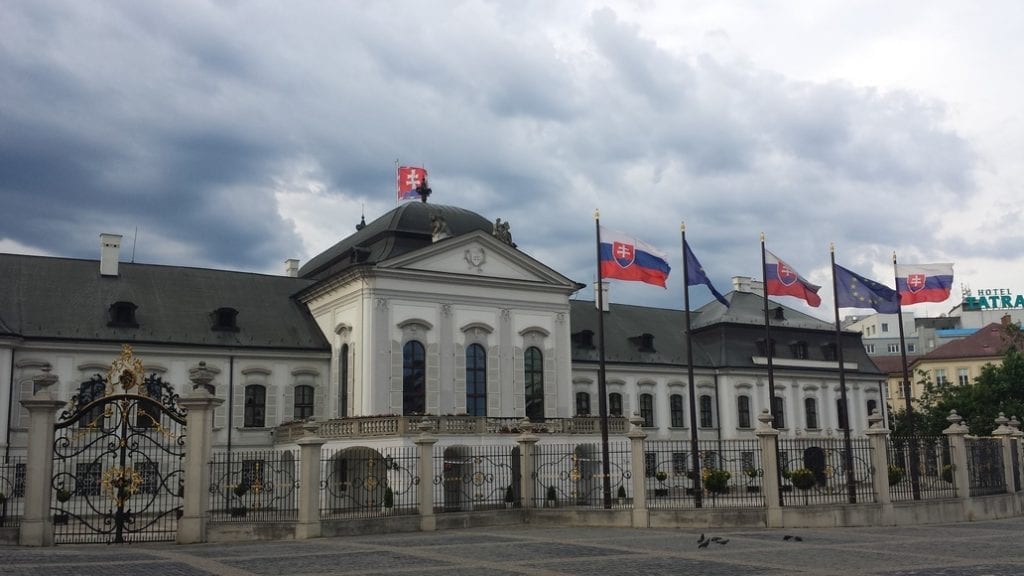 If you have time during your 48 hours in Bratislava, head here on a Saturday morning.

The central market in Bratislava is a lively, buzzing place where locals go to stock up on fresh produce for the week, look at clothes, and enjoy some cheap eats.

We had a really good Vietnamese meal here, which came to less than 10 Euros for two people! 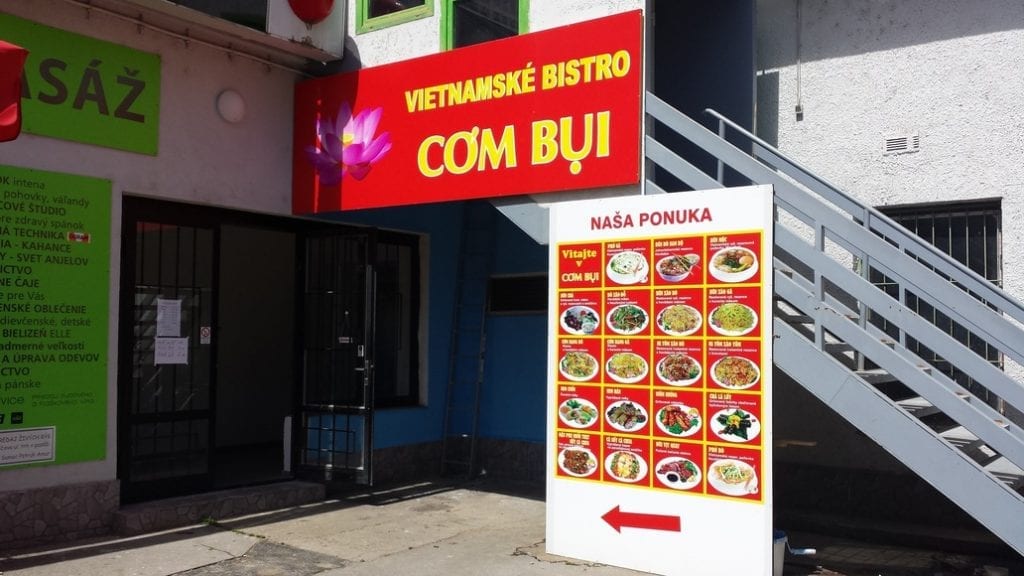 I visited Bratislava during my cycling trip from Greece to England in June 2016. Have you visited Bratislava, and if so what did you think? Are you planning to spend 2 days in Bratislava and would like to ask me a question? Just leave a comment below, and I will get back to you!

Bratislava Things to do FAQ

Readers planning a Bratislava city break often as questions similar to the following:

How many days in Bratislava?

Two days is about the ideal time needed to spend in Bratislava. You'll have a day to explore the city, a night to enjoy the bars and clubs, and the next day you can visit Devin castle or take a day trip to attractions nearby.

Is Bratislava worth visiting?

One of the reasons that Bratislava is a good city break destination, is it is an easy city to get around on foot, and doesn't have the tourist gimmicks of other big name destinations in Europe.

What is Bratislava known for?

Bratislava has become known for its romantic terraces, street art, charm, and ease of access. As a small capital, it is a breath of fresh air when compared to big name destinations like London or Paris.

Is Bratislava safe for tourists?

The city is a very safe place to visit, with violent crime very low (almost non existent). Pickpockets can be a problem though, so it's always good to be aware of what's going on around you, and to keep your wallet and phone tucked away somewhere safe. 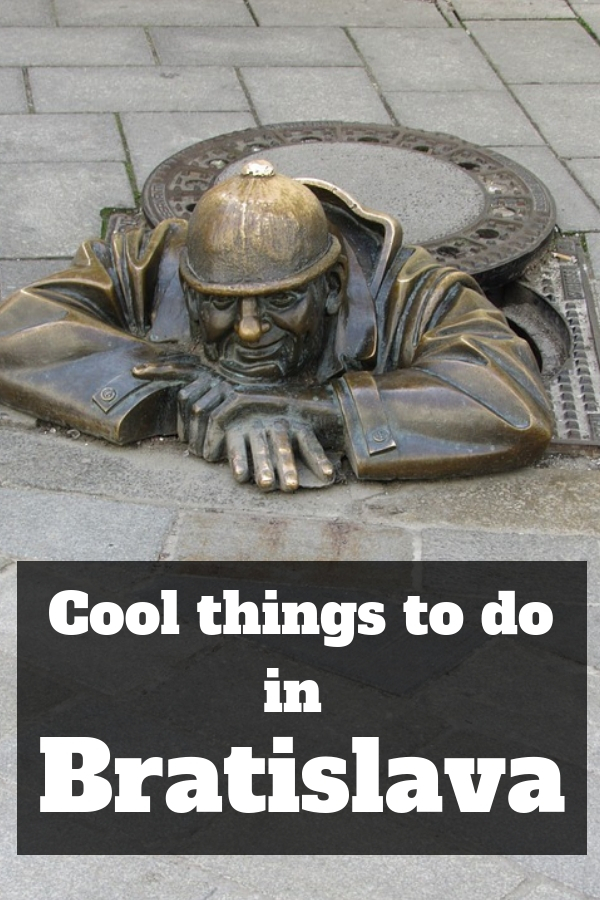