This guide to the best 15 ancient Greek temples you can still see in Greece today is perfect for lovers of mythology and ancient Greece. 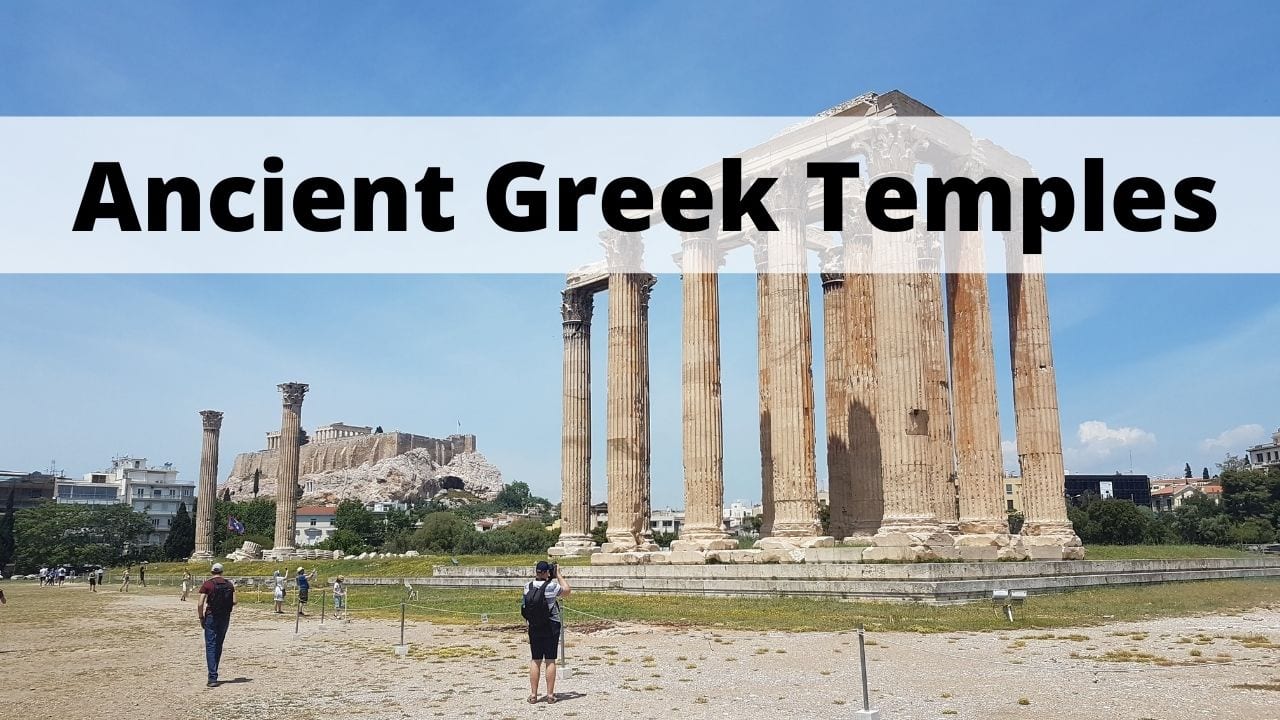 If you are planning a trip to Greece and want to visit an ancient Greek temple, here is a guide to some of the most interesting ones around the country.

Every year, thousands of travelers visit Greece. For many, the ancient Greek temples are the highlights of their trip.

Even if you are not a particularly big fan of Ancient Greece, the incredible history behind each temple makes it worthwhile to visit one even if you don’t have time for other tourist activities in that area.

Not all ancient Greek temples and ruins are created equally though. Here is a list of some of the most interesting ones around Greece that definitely deserve your attention!

Some of the most famous temples in Greece that you can still see today are:

Here's a look at these fascinating old religious buildings of Greece in more detail.

The Temple of Hephaestus is perhaps the best preserved ancient temple in Greece. Dedicated to Hephaestus, the Greek god of fire, forger of Zeus’s lightning bolts and Achilles’ golden armour, you can visit this temple in the ground of the ancient Agora in Athens.

According to the archeologists, the temple was built around 450 B.C. at the western edge of the city where it now stands on top of Agoreos Koronos hill. It is a classic example of Dorian architecture, which has somehow miraculously survived through the years relatively intact.

Read more here: Visiting the Temple of Hephaestus and Ancient Agora in Athens

The Parthenon, with its iconic architecture and ancient beauty, is the most famous of the landmarks in Athens. The stunning temple was built to honour Athena, goddess of wisdom and protector of Athens. 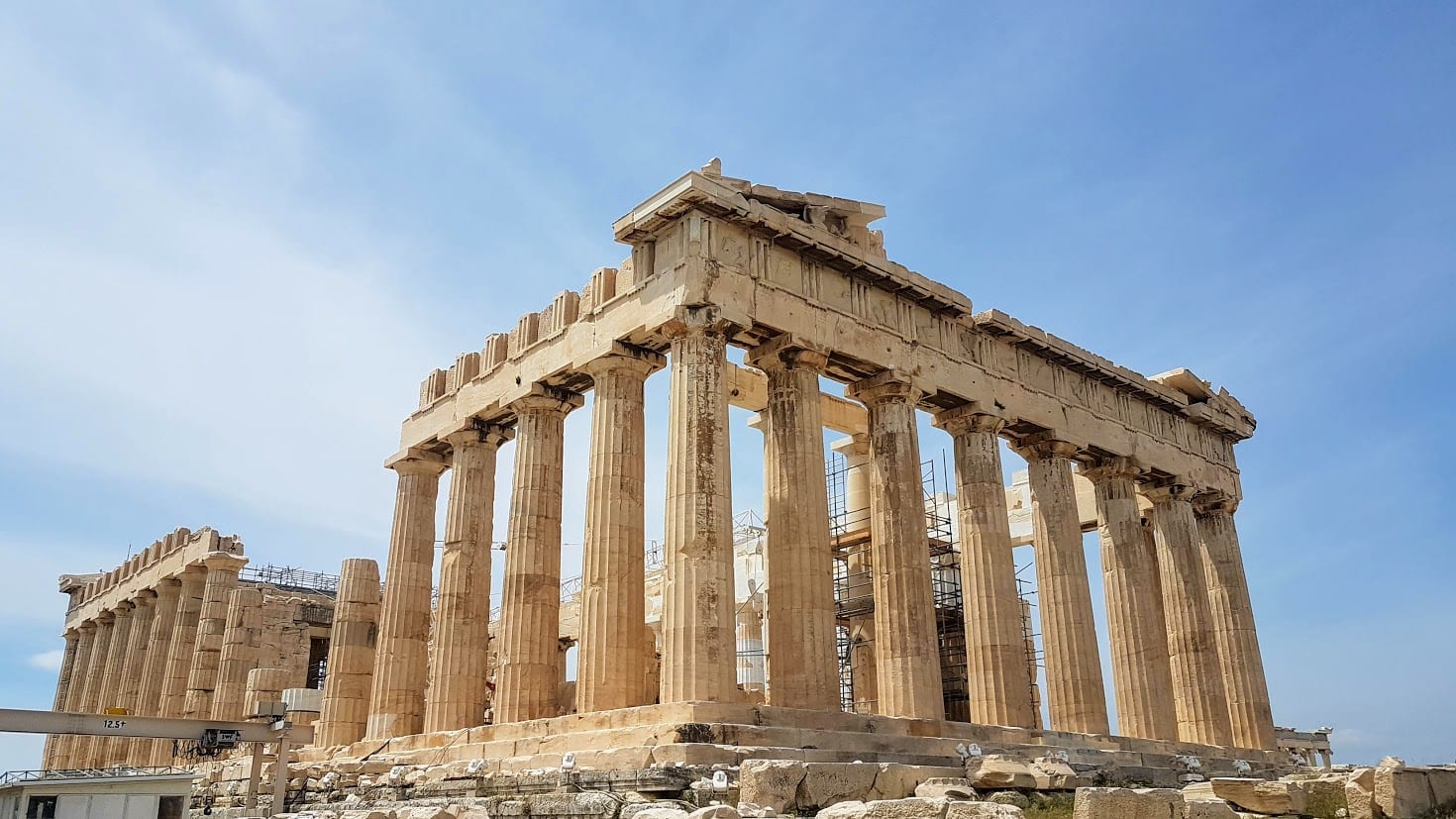 Along with the rest of the Acropolis complex, it has been designated a UNESCO World Heritage Site for its rich history and architectural wonder.

The Parthenon is one of the most-visited monuments in Greece. The incredible building was erected around 434 BC and it's been a symbol of Athens ever since.

No trip to Athens is complete without visiting the Acropolis and Parthenon – even if you have been to Athens before! Take an organised tour in order to really get to know the story behind this remarkable monument.

The Erecthion is another ancient Greek temple that sits atop the Acropolis in Athens. The building was constructed using Pentelic marble, and is a Doric temple. It is thought that it was built during 421-407BCE, as part of Pericles’ project to rebuild Athens after its destruction by Sparta in 404BCE. 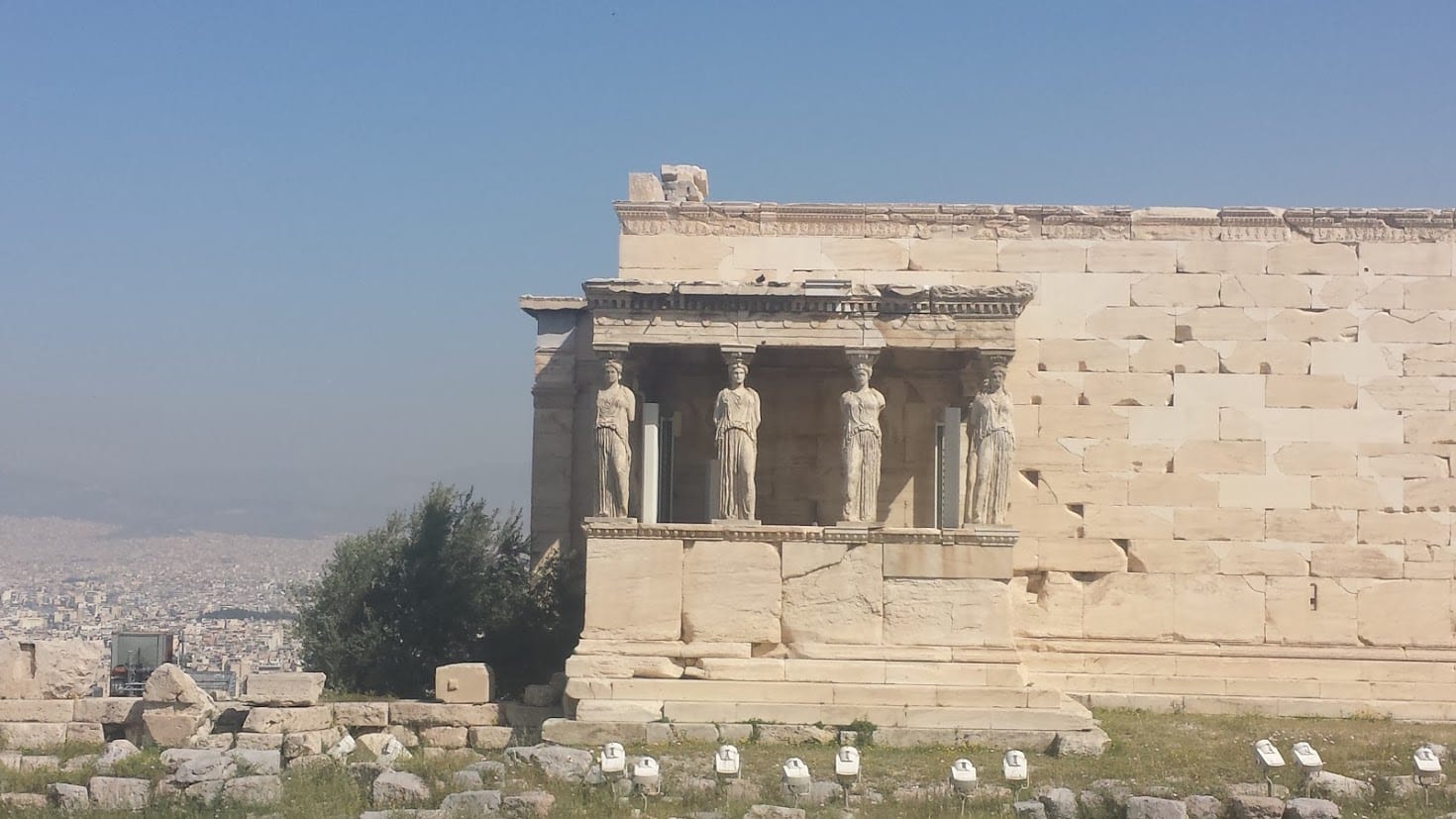 It has been rebuilt at least five times since it was first constructed and today stands only on its foundations with just three columns still standing intact.

The famous Caryatids (the female figures which look as though they are supporting the roof), are now inside the Acropolis museum for safe-keeping. The figures you can see outdoors on the Acropolis are replicas.

The Temple of Zeus in Athens Greece is one of the most important ancient architecture sites in all of Europe. It’s the largest temple ever built by any Greek city-state and has been referred to as a true architectural masterpiece. 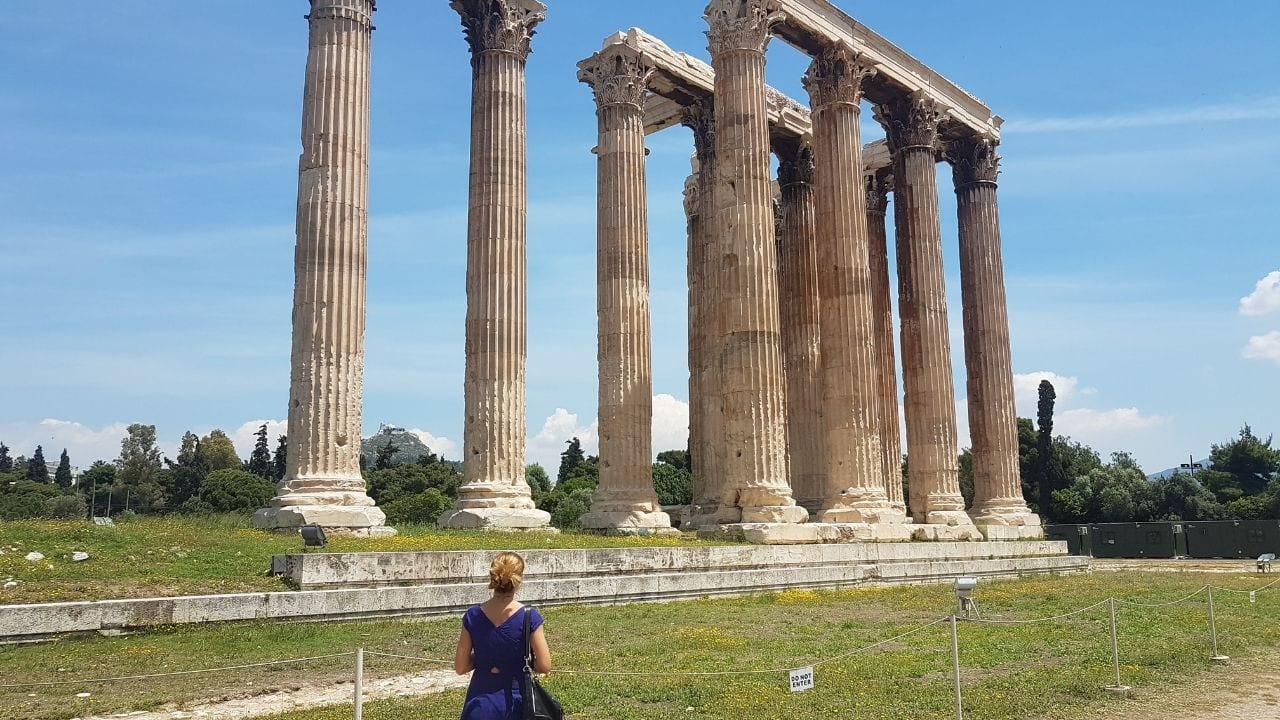 The temple of the Olympian Zeus is huge, and is the biggest temple that was constructed in Greece during Hellenistic and Roman times. It was built around 6th century BC, but wasn't completed until 2nd century AD by the Roman emperor Hadrian.

When you visit this ancient Greek temple in Athens, you also get a nice perspective of the Acropolis, which must have dominated the old city of Athens thousands of years ago!

5. The Temple of Apollo at Delphi (Ancient Delphi)

Delphi is an ancient site that was once the home of a massive temple dedicated to Apollo. The location’s significance was world famous even in the ancient world, and people from far and wide would travel there on a pilgrimage in order to leave dedications to the Greek gods, and receive a prophecy from the Oracle. 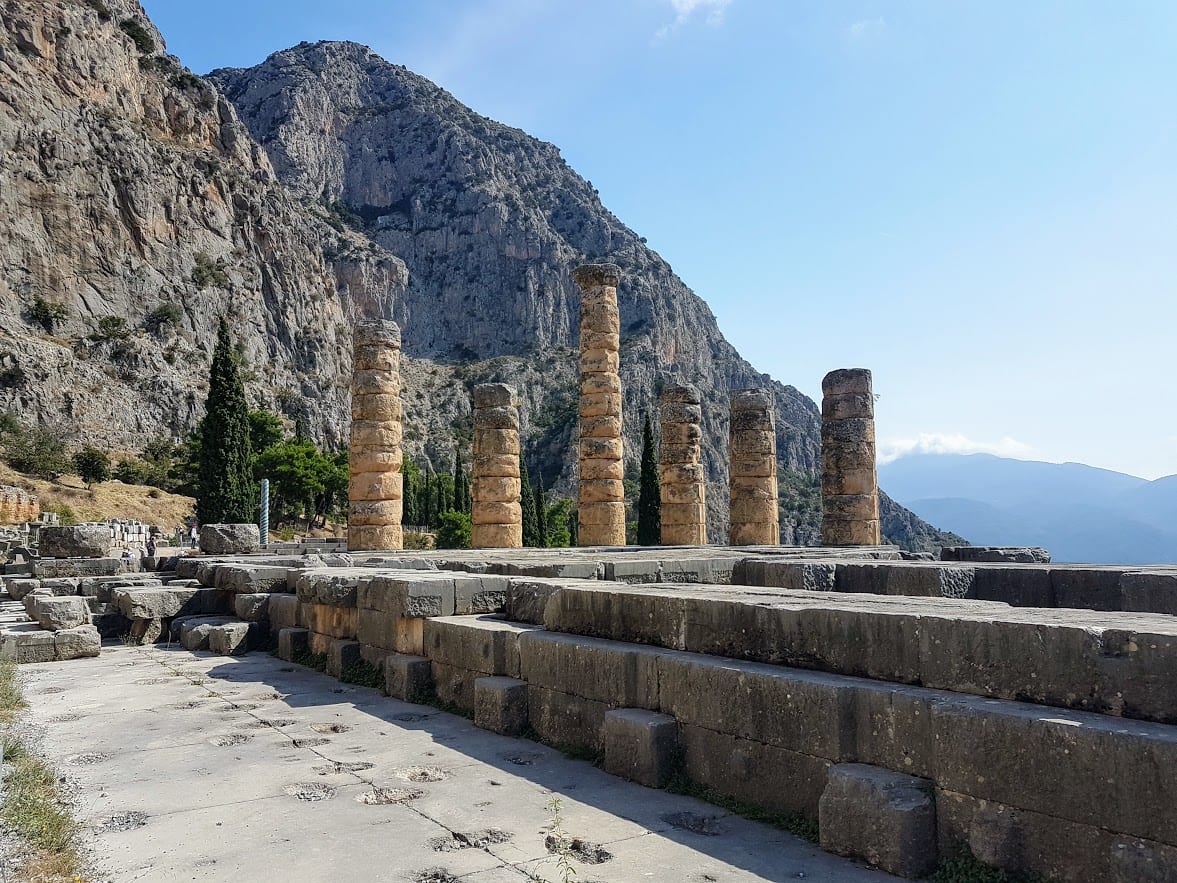 Tourists are drawn to Delphi, Greece because of its rich history, and many travelers comment that they feel the setting has a special atmosphere when they see the temple and experience its ancient atmosphere for themselves.

Whilst there may not be much left of the Temple of Apollo itself now, it's definitely one of the best trips you can make from Athens.

The Tholos of Athena at Ancient Delphi is one of the most unique ancient structures in Greece. Unusually, it is circular in shape, and example of these sorts of temples in Greece are quite rare. 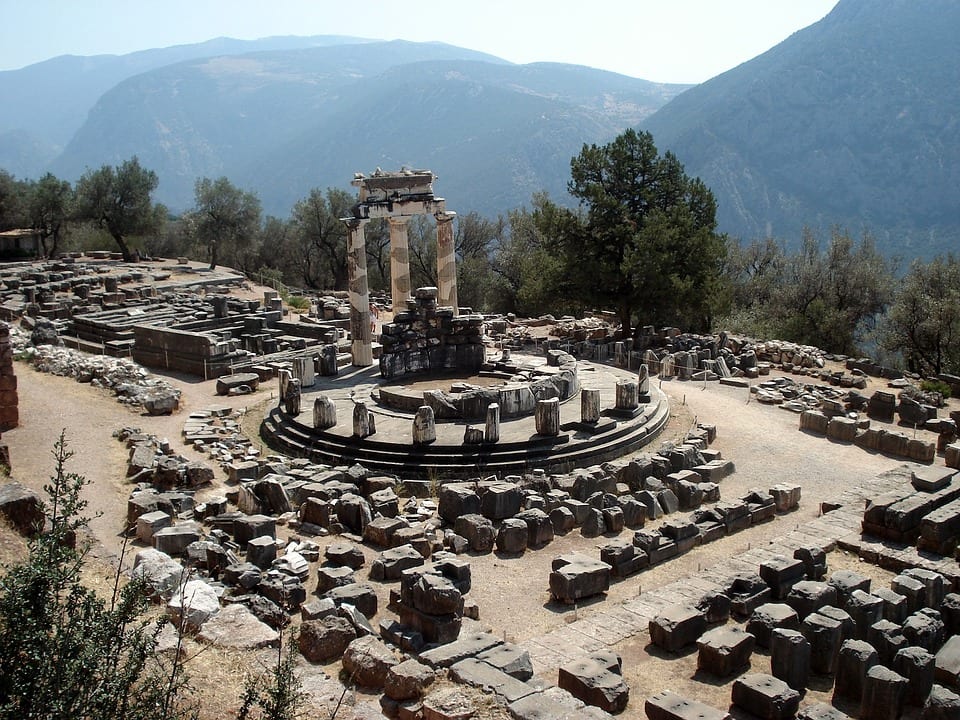 Whilst the Tholos of Athena has been reconstructed, there is definitely something about its setting and ambience. When visiting Delphi, it is in a separate area of the site than the more famous Temple of Apollo.

The temple of Poseidon, also known as the Temple of Sounion, is a Classical Greek temple that was built in around 440 BC at the tip of Cape Sounio.

Poseidon's Temple stands on a hill overlooking the Aegean Sea and neighboring islands, and seems purpose built to enjoy a magnificent sunset from.

If you happen to be in Greece and have a few days before your next flight or ferry departure, consider taking the trip from Athens to Cape Sounion.

Although this is not a short day-trip (you will need at least half a day without any stops), it is one of the most beautiful drives I know of. You can either rent a car and drive down yourself, take a half-day tour or take public transportation!

8. Temple of Zeus at (Ancient Olympia)

The ruins of the  Temple of Zeus at the archaeological site of Olympia are a shadow of their original form. This temple was built to honor the chief of the gods, Zeus himself, at around 470 B.C when the ancient Olympic Games were at their most significant. 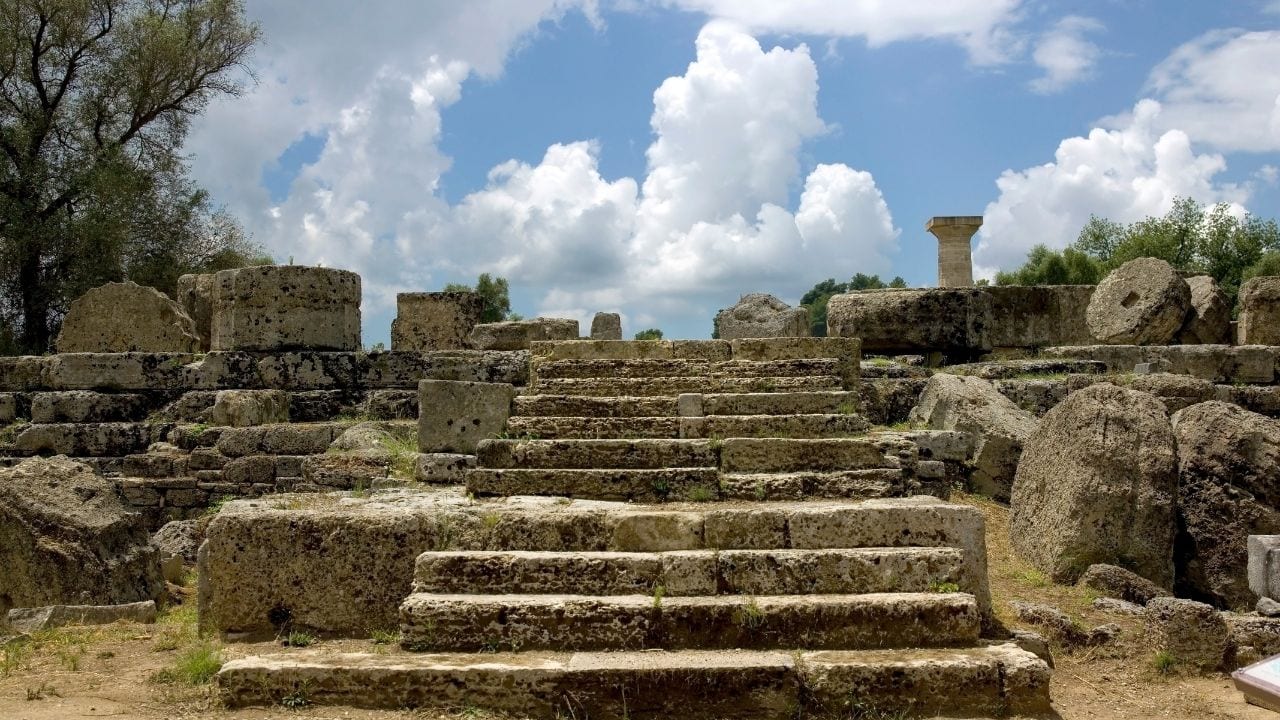 War, time, and neglect meant that the site was abandoned, although some of the metopes of the 12 Labours of Hercules that adorned the temple were saved, and are now on display inside the Olympia museum.

Check out my video: Ancient Olympia

9. Temple of Hera at (Ancient Olympia)

The temple of Hera in Ancient Olympia is one of the oldest monumental temples in Greece. It stands, protected by a powerful terrace wall, in the north-west corner of the sacred precinct of the Altis. 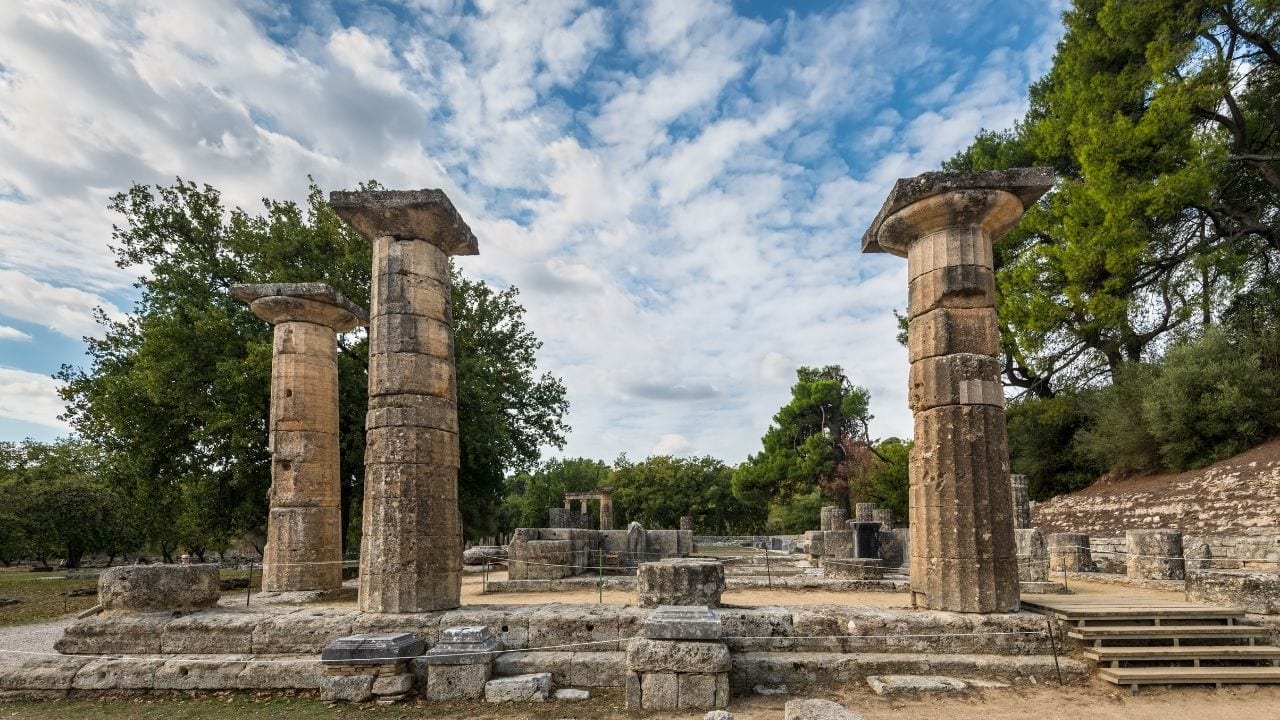 The Temple of Hera was the largest temple at Ancient Olympia. It is a Doric peripteral temple, that is it has eight columns in its front and rear walls, while there are only six along each side wall.

Like a lot of Ancient Olympia, there is no longer much of the temple of Hera remaining, so you may need to use your imagination when visiting!

The Temple of Aphaea on Aegina Island is a temple dedicated to the goddesses, Aphaea and her companion deities, Demeter and Persephone. It was constructed in 460-450 B.C., but today looks very much as it did when it was originally built because of efforts by the Greek government to preserve its original structure. 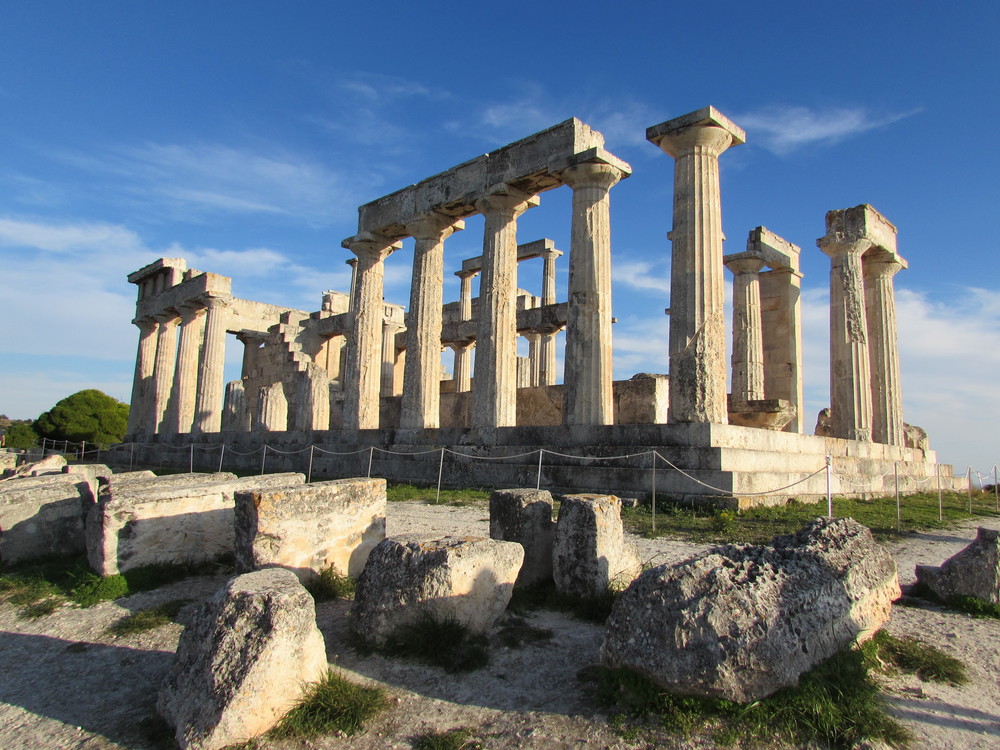 The Temple of Aphaea was constructed in an Ionian style with Doric columns. It has two terraces; one for animal sacrifices and another for worshipers.

The Temple of Demeter is located on the island of Naxos in Greece and was built between 550 BC and 450 BC. It is one of the oldest temples dedicated to Demeter, the goddess of agriculture. 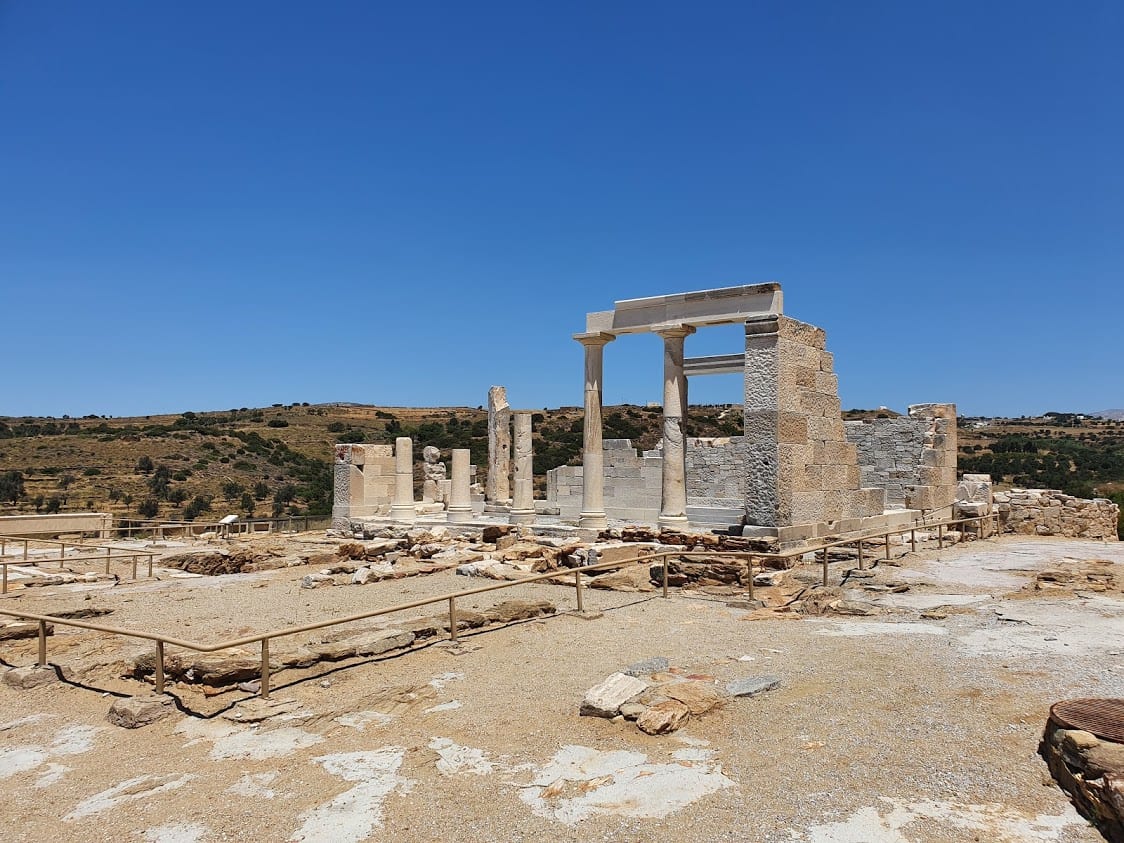 The temple has been excavated in recent decades by archaeologists who have also recreated some scenes that were found on walls inside it, including a scene depicting Persephone with Hades and another where an old man offers wheat to Demeter, which she refuses.

Bassae is a small village of ancient Greece and was once the capital of Arcadia. The most famous archaeological site that lies within its boundaries is Temple of Apollo Epicurius, which dates back to 460 BC. 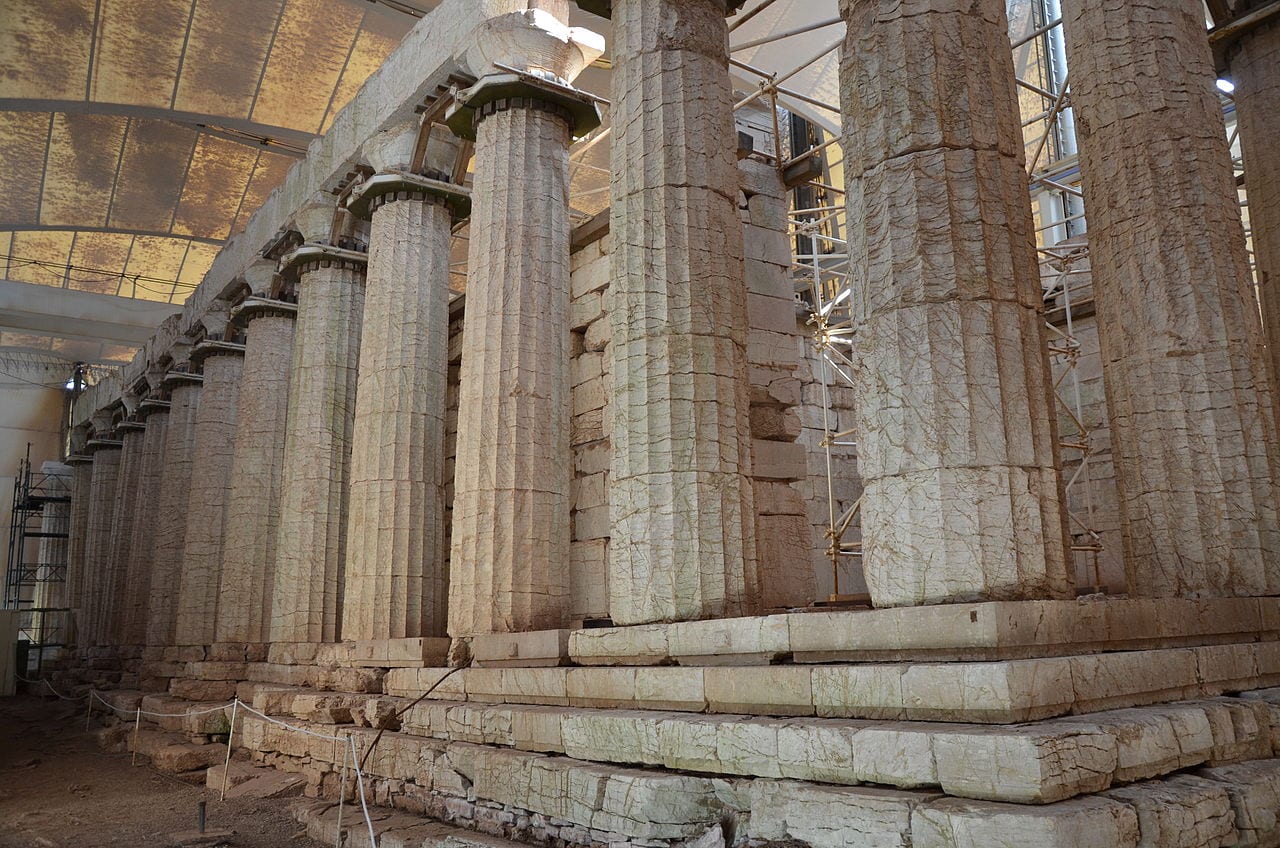 The Temple of Apollo Epicurius at Bassae is an Ancient Greek temple located in the remains of a Doric-style sanctuary, about 15 km from Argos.

It was dedicated to the god Apollo Epikourios (Apollo who looks out for escapees) and built atop Mount Kynortion, in sight of the older Temple of Athena Alea at Tegea and upon a ridge overlooking the village of Bassae below.

Corinth was an ancient Greek city located in the northeastern part of the Peloponnese. The Temple of Apollo, located north of Acrocorinth, was one of two major sacred sites where many pilgrims and tourists visited every year. 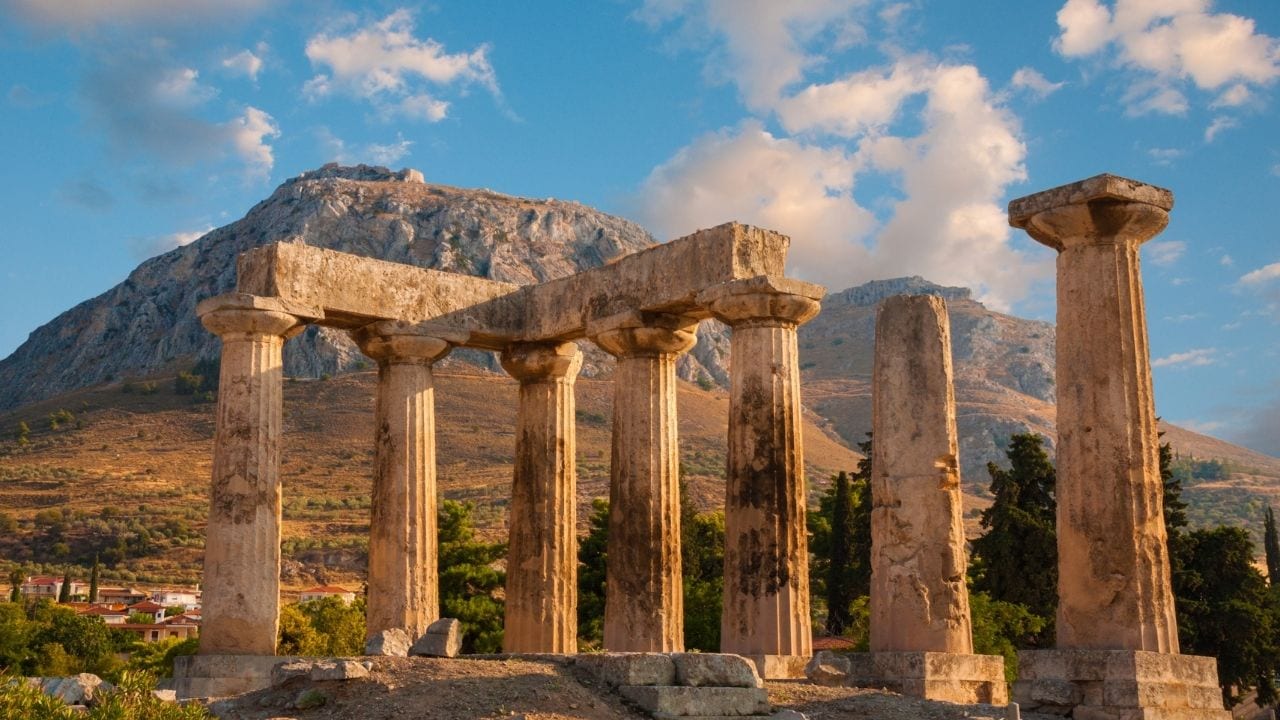 It is not the first place that comes to mind when thinking about visiting in Corinth. However, you should definitely consider it as a must-see!

There are only three columns left from this once magnificent temple of Apollo (the god of music and healing). The temple was built in around 550 BC by Polycrates, tyrant of Samos who reigned over Argolis, which is now part of modern Greece.

The Temple of Apollo at Delos is one of the most important temples in Greece. It was built on a small island, which according to some sources is where Leto gave birth to Apollo and Artemis (the twins). The temple became a cult center for healing and oracles.

The Temple of Apollo at Delos is an ancient Greek temple dedicated to the god Apollo. The sanctuary was located on the island of Delos, considered a sacred place by those who followed the cult of Apollo. This temple was built around 470 BC and served as a center for worship until its destruction in 262 BC when it fell from use.

As with many ancient ruins, the sanctuary of Artemis in Vravrona and Brauron is not as well-known as other temples like the Parthenon in Athens. 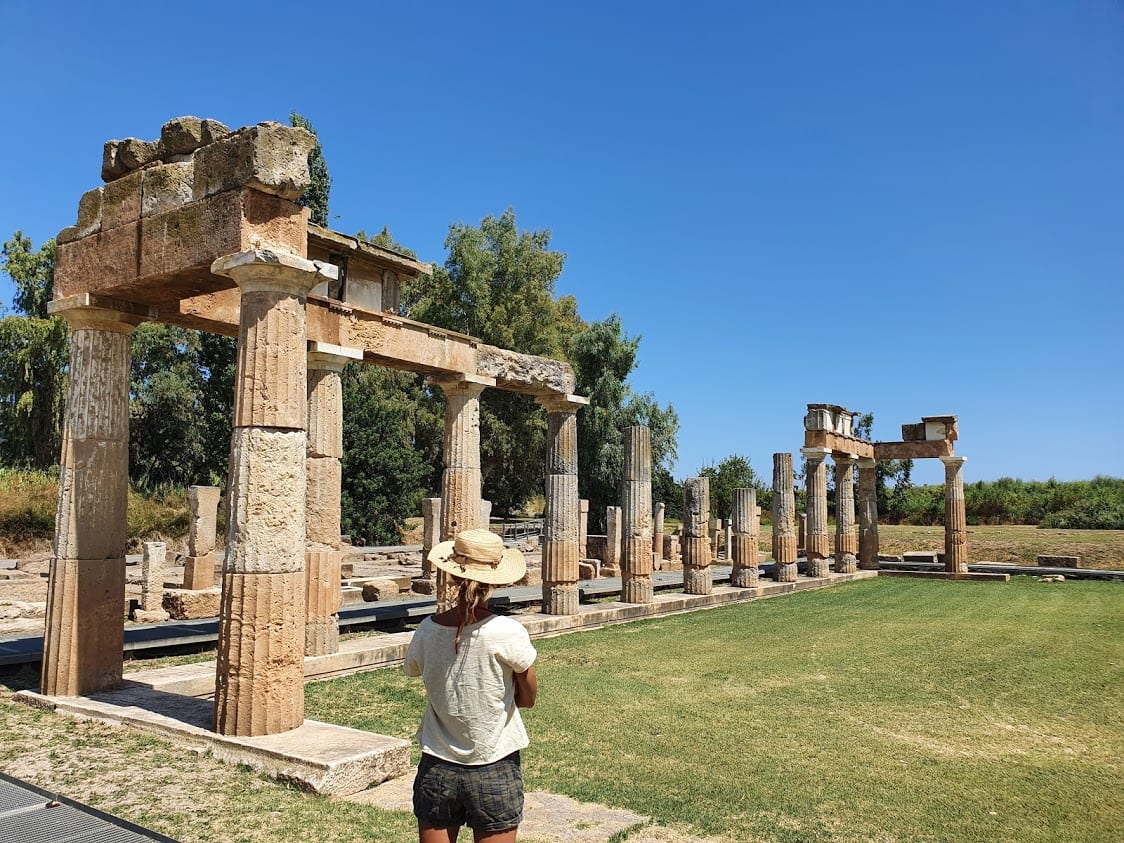 Located 33 kilometers out of central Athens, this lesser-known archaeological site may seem impractical to visit if you're only looking for a quick day trip, but it's worth the half-day trip. The site reached its peak between 500 BC and 300 BC during Classical Greece era. 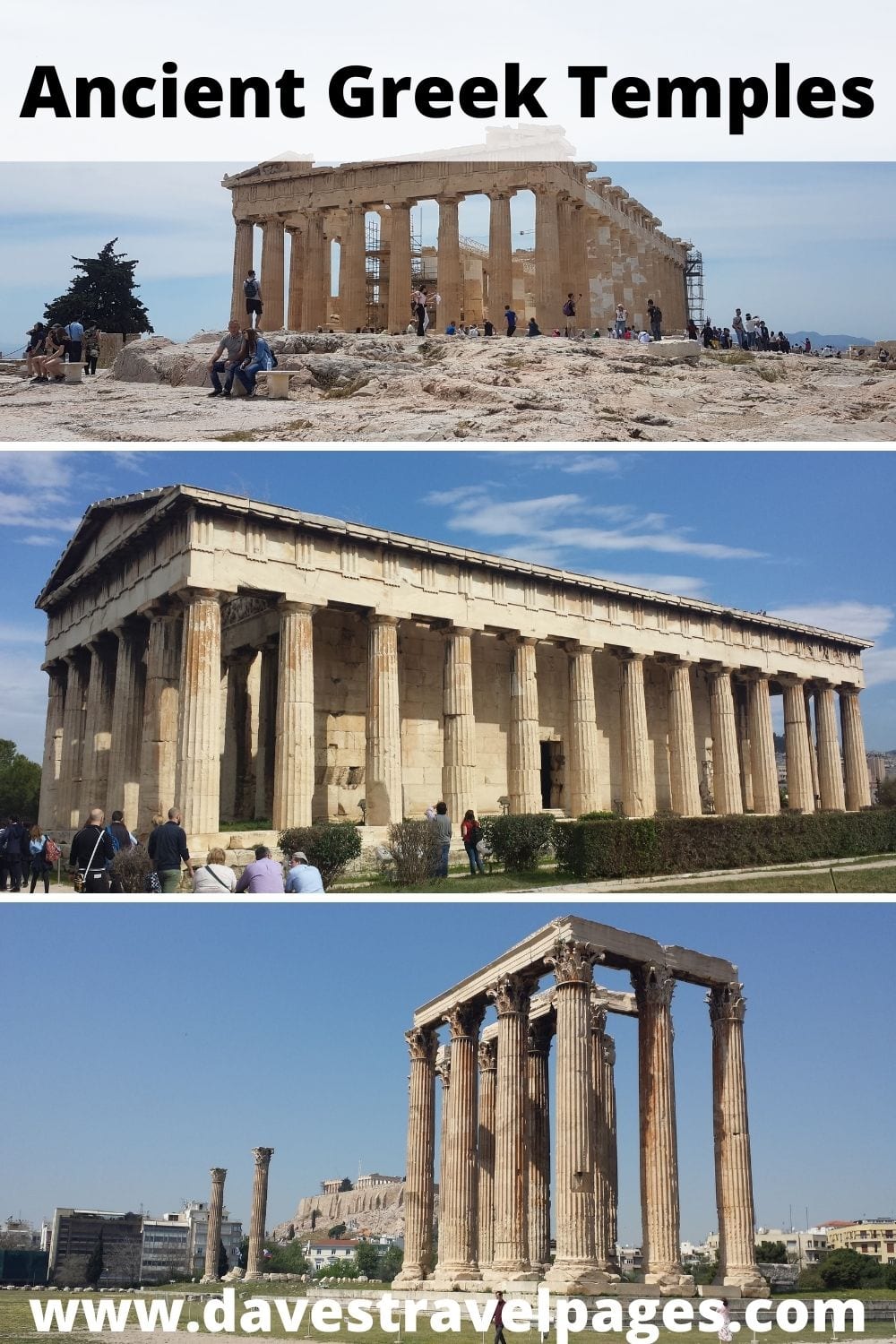 – Dave Briggs
Dave is a travel writer who has been living in Greece and writing about the country since 2015. As well as creating this Greece temples guide, he's written many more guides to Greece and the islands. Follow Dave on social media for travel inspiration from Greece and beyond: