The Acropolis museum in Athens, is the most visited museum in Greece. Opened back in 2009, it is a purpose built, thoughtfully designed building, boasting an incredible collection of artifacts, and unparalleled views of the Acropolis itself.

No trip to Athens is complete without spending time in the Acropolis Museum. This architectural delight was opened to the public in 2009, and since then has been consistently voted one of the best museums in the world.

As I live in Athens, I've been fortunate to have visited the Acropolis Museum perhaps as many as 10 times over the last five years. I've always found it a fantastic place to walk around, and each time come away feeling like I have discovered something new.

This guide acts as an introduction to the New Acropolis Museum, and includes useful tips and insights that I hope will help you make the most of your time when visiting.

Where Is The Acropolis Museum Of Athens?

The address of the museum is 15 Dionysiou Areopagitou street, Athina 117 42, and it is located at the southeast corner of the Acropolis rock. You can get to it via the pedestrianized street that forms a semicircle around the Acropolis.

If you're staying in a hotel in Athens which is not walking distance, the Acropolis museum is easily reached via the metro system. There are no prizes for correctly guessing that the metro station you need is called Akropoli (or Acropoli/Acropolis… depending on the spelling of the day). 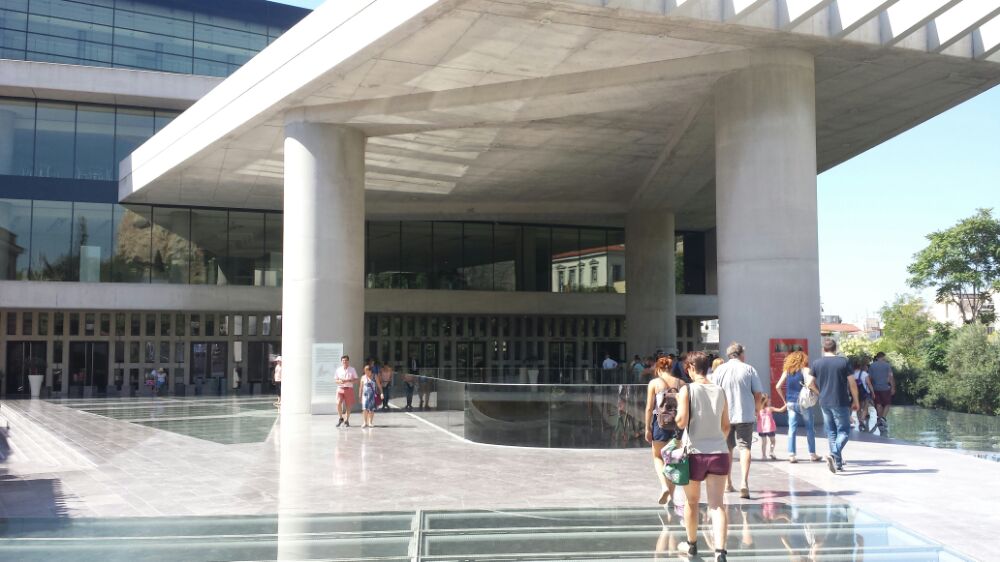 On approaching the entrance to the museum, you'll walk over a glass floor just outside the building from where you can see an archaeological excavation beneath. It's kind of strange to realize there's still so much history that lies beneath the city!

During the winter season (1 November – 31 march), the admission fee is 5 euros, and there are various concessions available. The summer season prices for the Acropolis Museum are 10 Euros.

Opening hours vary with the high and low seasons, although some holidays excepted, you can be certain it will be open every day between the hours of 09.00 and 16.00. 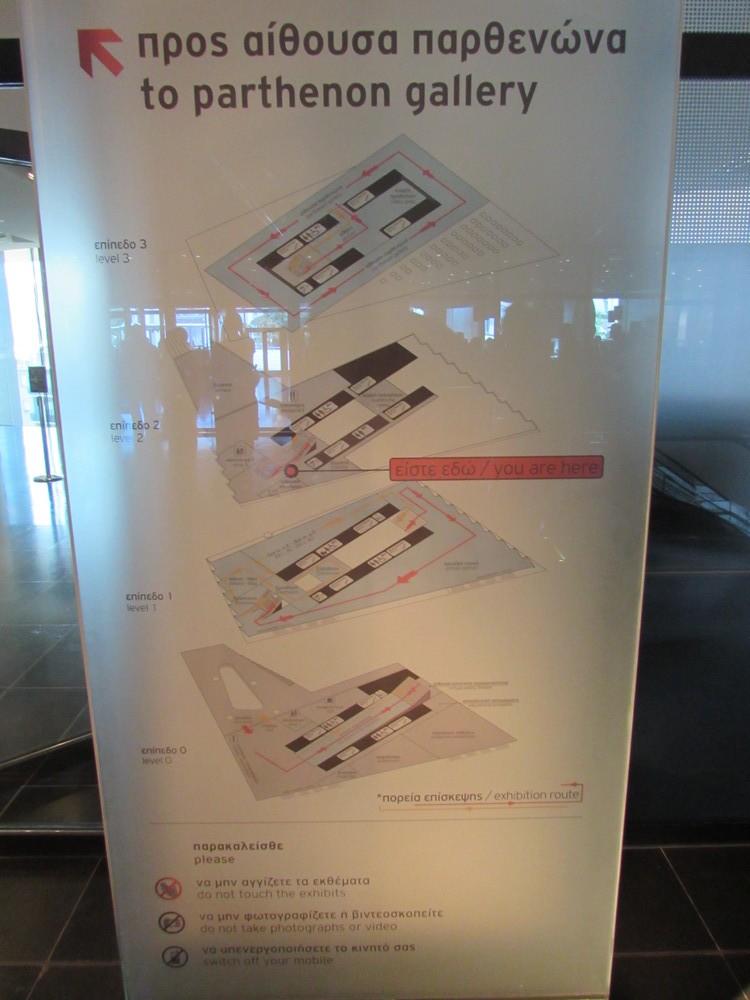 The Acropolis Museum in Athens is laid out over four floors, which are floors 0,1,2, and 3. The space is light and airy, and escalators link the floors together. 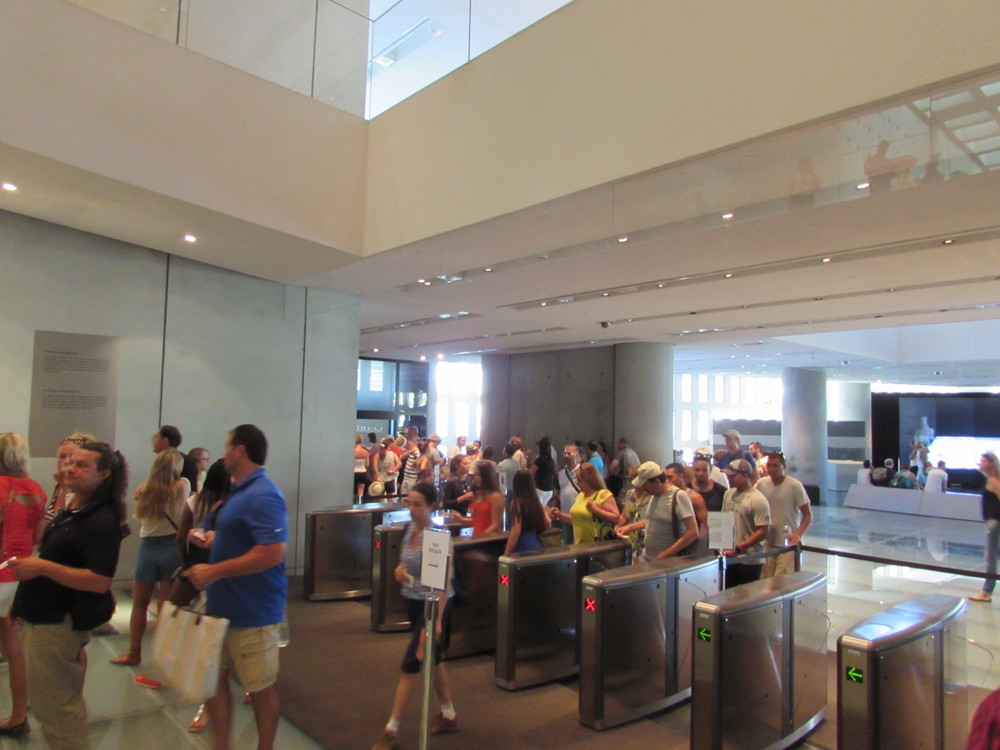 Level 0 is the entrance level. There will be a small queue at the door (it's a popular place after all), and once in, you will need to put any bags through an x-ray scanner.

After this quick security check, you need to join another queue in order to buy tickets. With the tickets in hand, head to the entry point for the museum proper, and scan the barcode face down to open the gate.

Pro tip – If at all possible, don't visit the Acropolis Museum with a large bag. You will be required to leave it in the cloakroom. This will involve joining yet another queue. 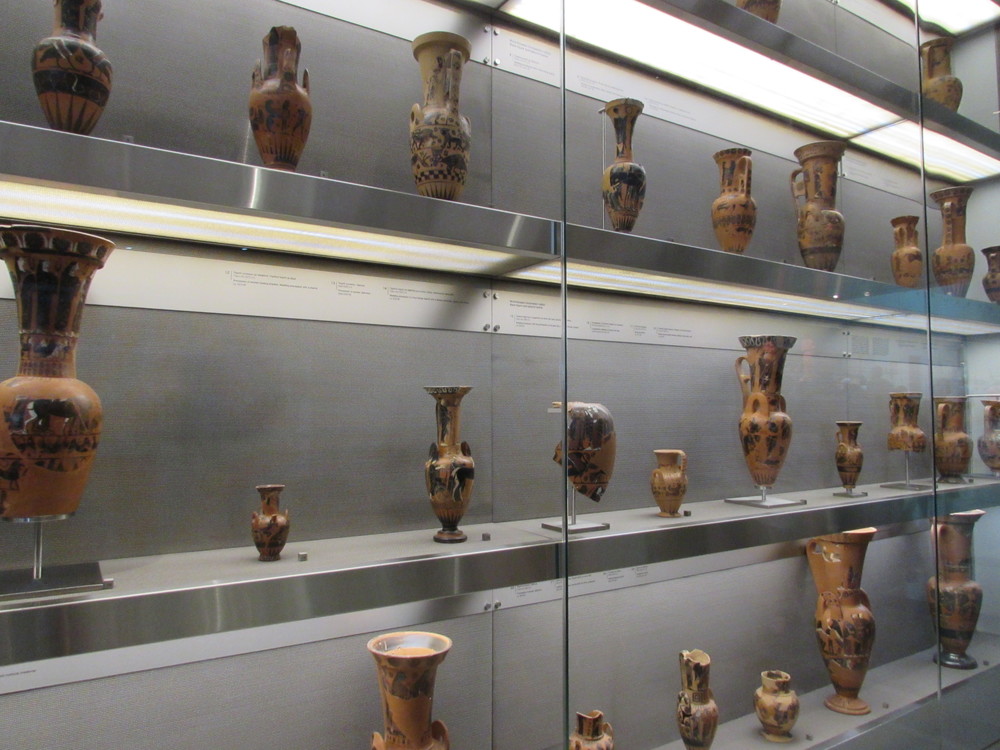 If you have seen that I have mentioned the word ‘queue' a few times, then you will by now have the impression that the Acropolis Museum in Athens is a busy place.

And you would be right. At some point, every tour group in Athens will visit the museum, and the numbers of large, organised tours are astounding.

To the independent traveller, this can be something of a pain, but it can also be made to work to an advantage. Want a free tour of the Acropolis Museum? Just tag along with a group speaking your language, no one will know!

Of course, you don't need to do this. Most of the exhibits are very well marked, and have detailed information boards near to them.

Once you have entered the museum, you'll pass by some artefacts retrieved from the slopes of the Acropolis. These are displayed on either side of the hallway which approaches the stairs leading from the ground level to floor 1. 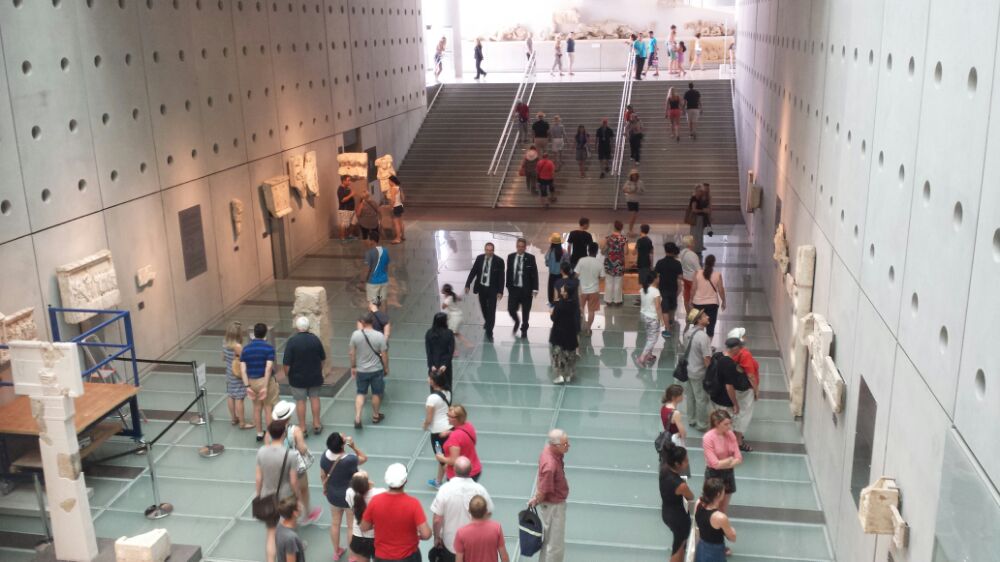 On this level, you'll find quite a few interesting exhibits. These include an amazing collection of small bronze statues (which are among my favourite things to see in the Acropolis museum), and many statues. 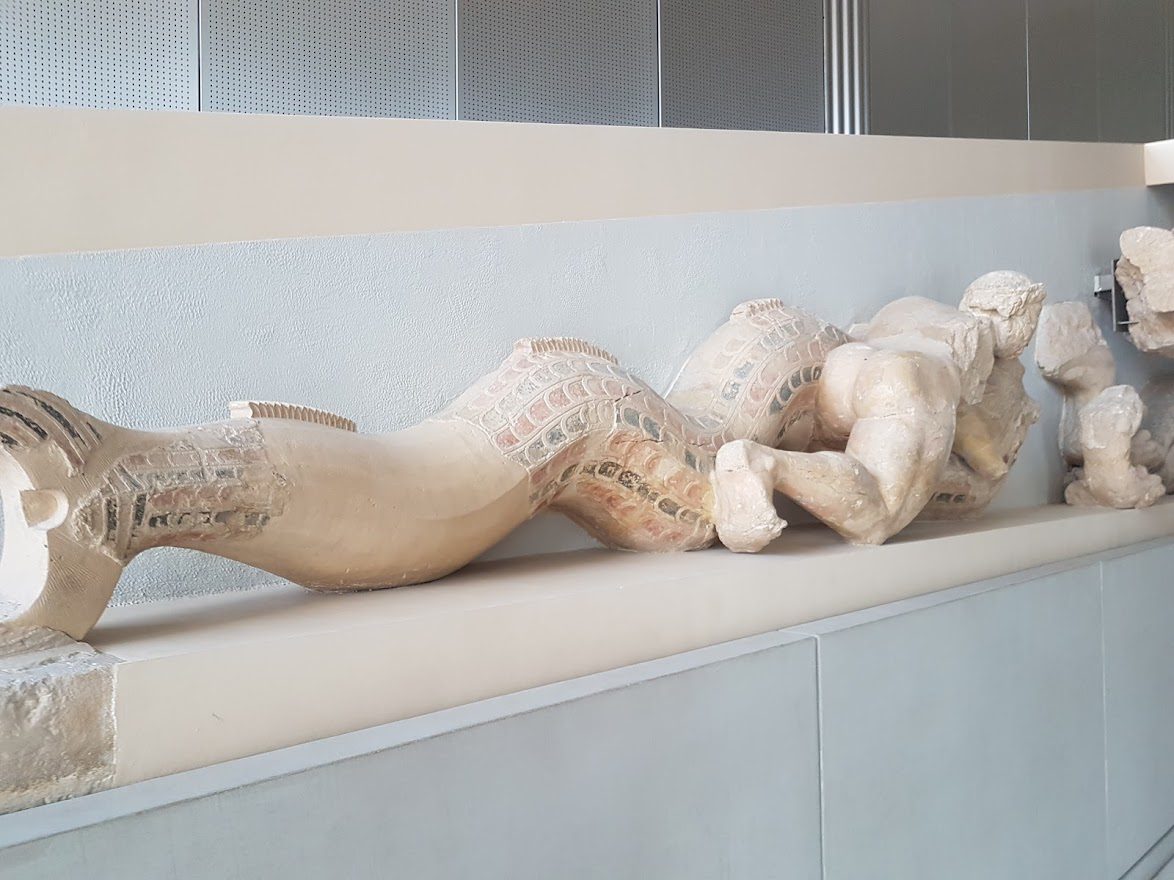 It's also on this level that you discover that the statues of ancient Athens weren't white at all – they were painted different colors. This gets you thinking about what the ancient city must have looked like in its heyday. I like to think it was as colorful as some of the temples in India! 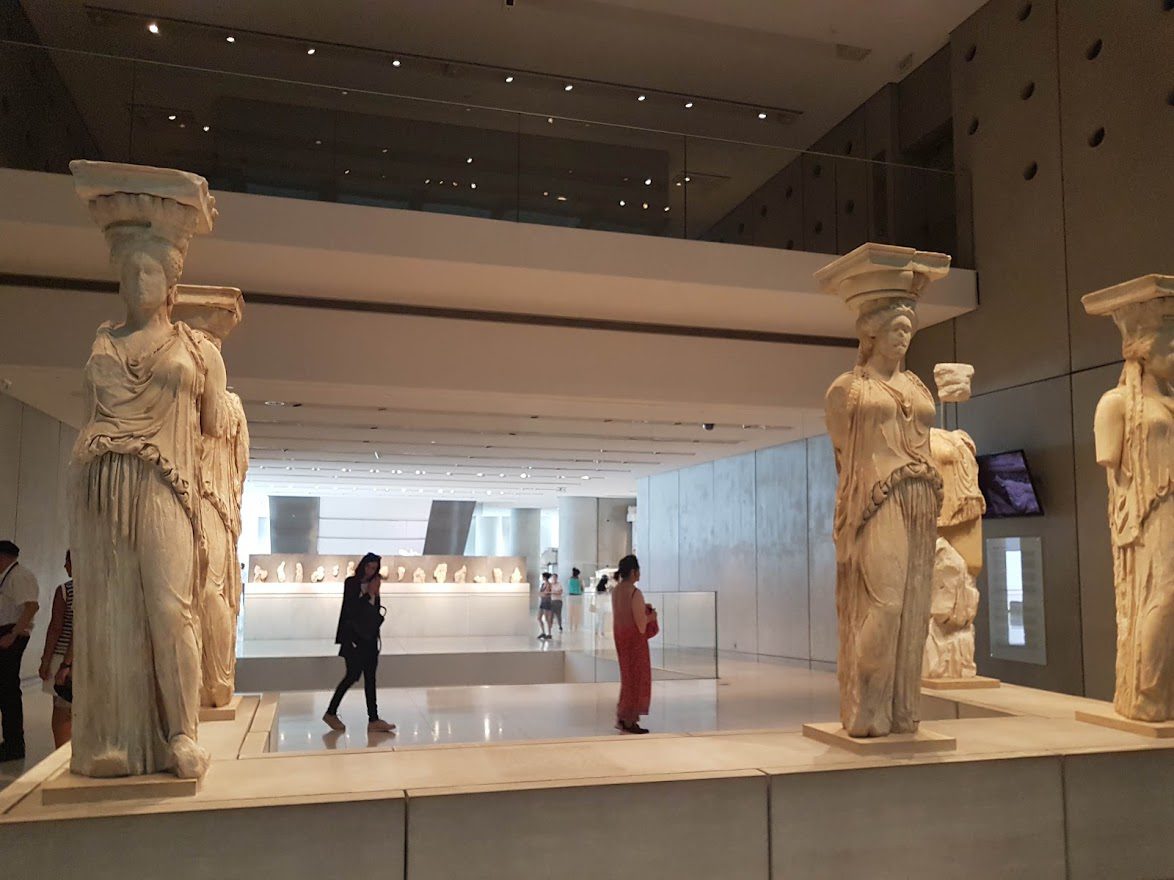 You'll also find the Caryatid sculptures here. If you've already visited the Acropolis and think they look familiar, it's because the ones there are copies – these in the museum are the originals!

If you're starting to feel a bit weary, why not take a coffee break in the Acropolis Museum cafe which is also on the second floor? There is a great outdoor terrace here as well, which has fantastic views of the Acropolis.

The route through the Acropolis Museum leads ever upwards, until reaching the final level, known as the Parthenon Gallery.

This gallery on the third floor has been purposefully designed to best show the famous Parthenon marbles. Note that most of these marbles are known as the Elgin marbles and are in the British Museum. One day, we hope they will be returned to Greece to be reunited with their counterparts in the Acropolis Museum! 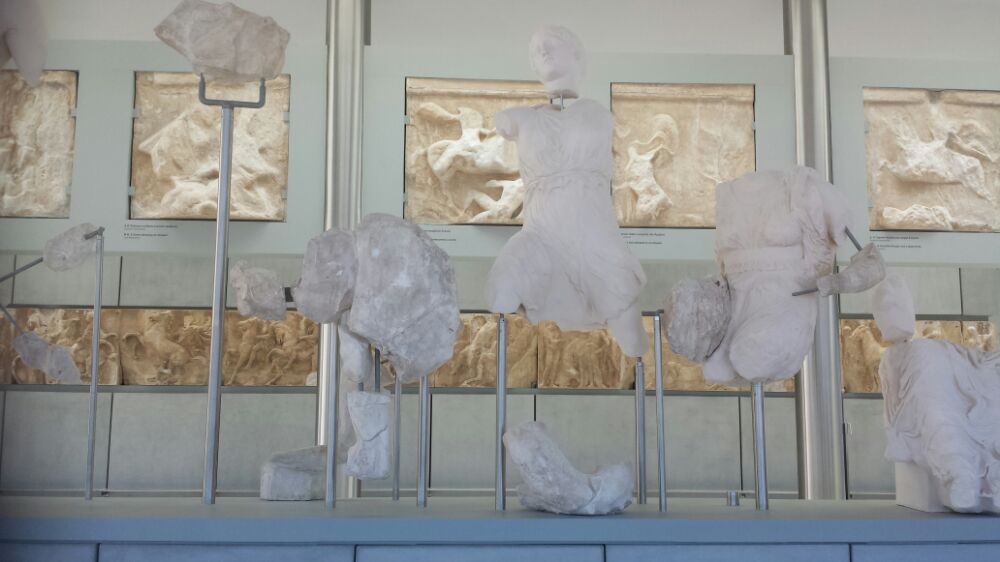 In the mean time, the museum has displayed the remaining Parthenon frieze marbles they have, and used faithful replicas to fill in the spaces for those they hope will be returned.

Lots of natural light shines in on the top floor, making a really outstanding display area. 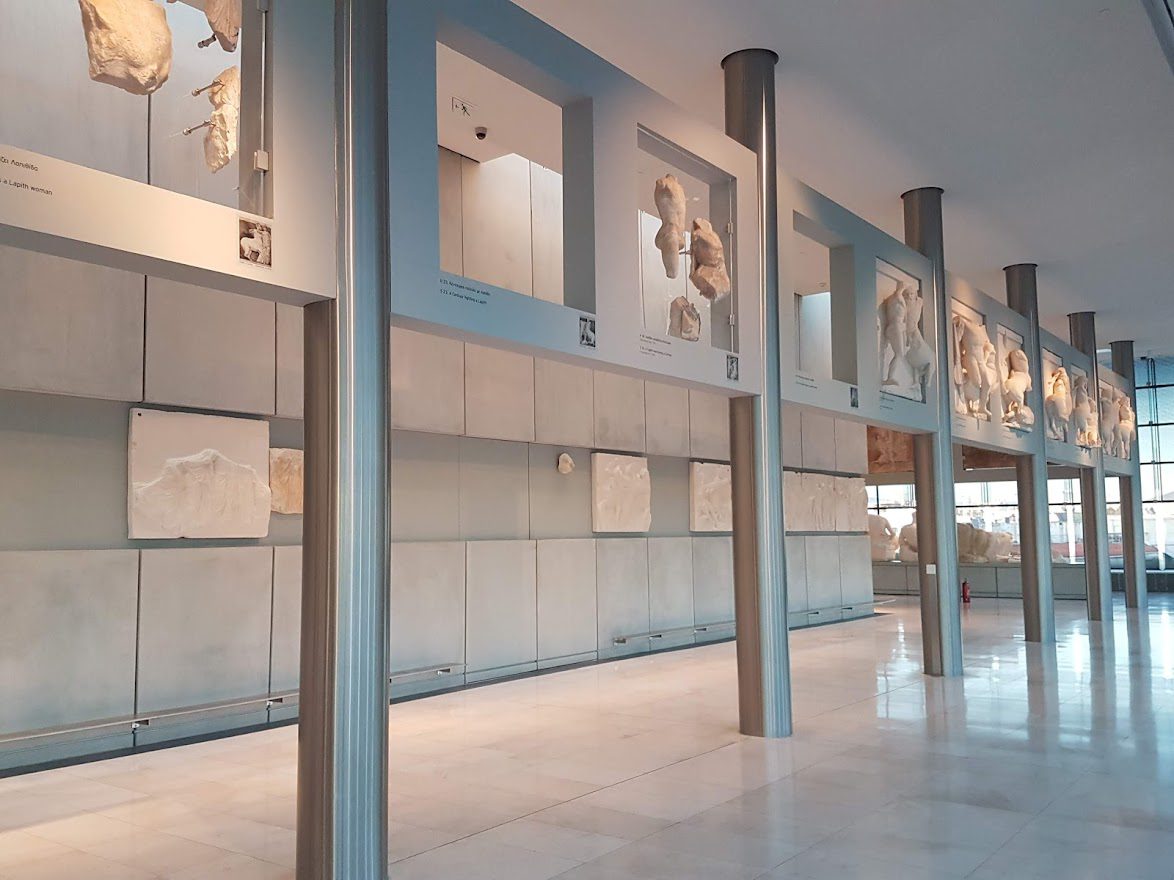 This floor of the museum is really the crowning jewel of the museum. What's more, it also offers stunning views out onto the Acropolis itself. 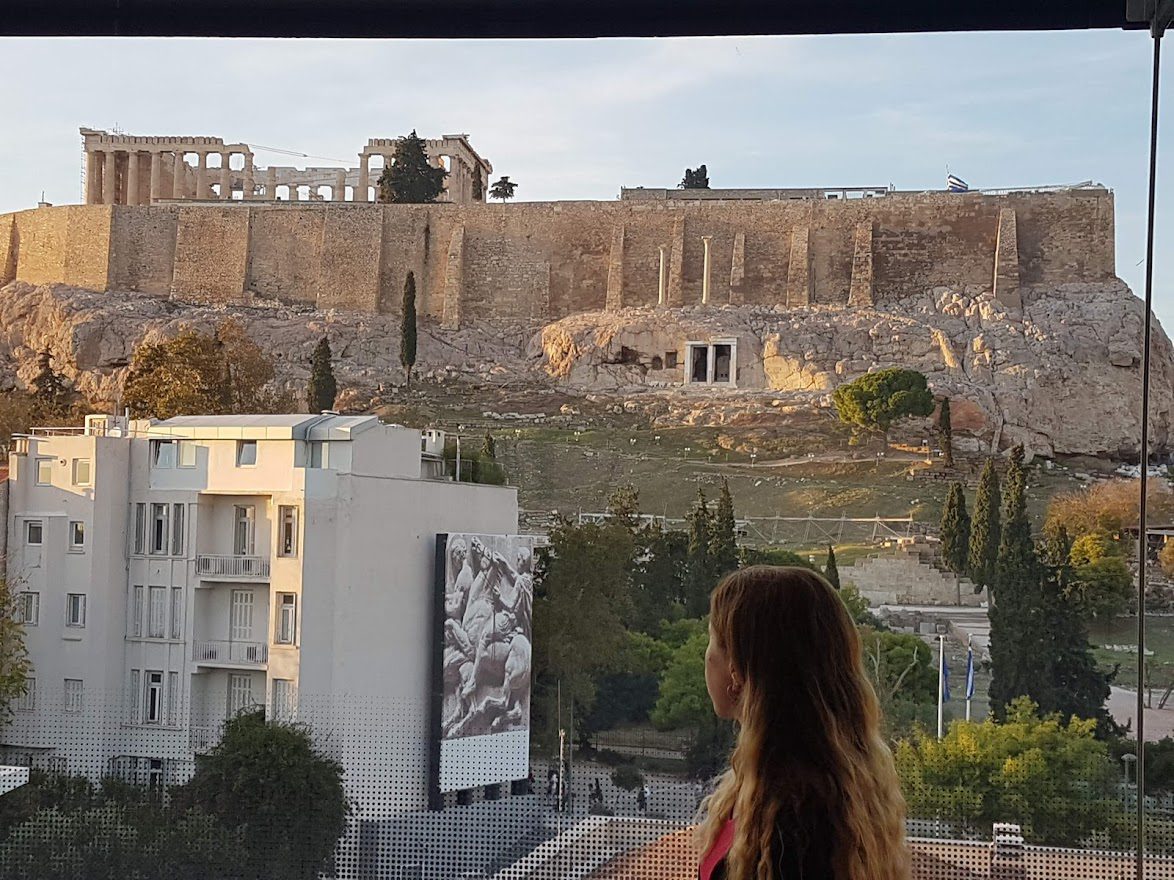 So my final thoughts about the New Acropolis Museum!

Overall, the Acropolis Museum in Athens is one of those places you have to visit when in Athens. It does help to give a background to ancient Greek history, and also has some excellent exhibits which are faultlessly displayed.

To make the most of your time here, I would say to allow at least 1.5 hours to walk around and full absorb what you are seeing.

If you already know a lot about Ancient Greece there's no need to take a paid tour. If your knowledge of the ancient times such as the Greek bronze age is a bit hazy though, you might benefit from a tour.

Can you take photos in the New Acropolis Museum?

The Acropolis museum has a weird “don't take photos' policy that applies to certain parts of the museum but not to others.

On level 1, keen, on the ball security staff will politely ask people not to take any photos. I really have no idea why.

Taking photos is permitted on the other levels though. Why should this be?

It's one of those frustrating things that is never adequately explained, made all the stranger by the fact that several people have told me that when the museum first opened, the rules were actually reversed!

Back in 2010, you could take picture on the lower levels, but not on the Parthenon level. Go figure! 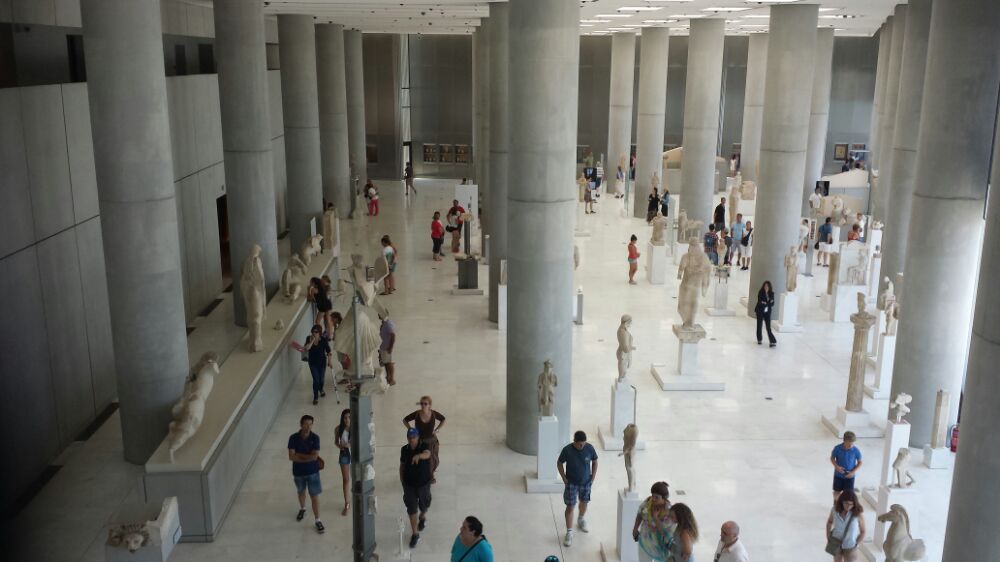 Foreign visitors planning a trip to Athens often have many questions to ask relating to the Acropolis Museum, archaeological sites, and how to organize their time. Here's a few of them:

Why is the Acropolis museum famous?

The Acropolis Museum is often regarded as one of the world's best museums. The design of the museum itself, with huge glass panes, is outstanding, and the collections of ancient artefacts were all found on the ancient Acropolis site.

No, the Acropolis Museum is not located within the Ancient Acropolis Archaeological Site. It is a separate museum, positioned opposite the Acropolis, and you need a different ticket to enter it.

What is inside the Acropolis museum?

The Acropolis museum is located over a large ancient site, and some of the floors are made of glass to allow visitors to view the archaeological excavations below. The museum also has an amphitheater, virtual theatre, and hall for temporary exhibitions in addition to the Parthenon Hall, a huge gallery where the marble sculptures that once adorned the ancient Temple now reside.

Is it worth visiting Acropolis Museum?

If you plan on going to the Acropolis, you should also allow time to visit the Acropolis Museum. Within the museum, you will find artefacts and collections discovered on the Acropolis archaeological site, including the outstanding Parthenon Marbles.

How does the Acropolis represent the cultural identity of Athens?

The Acropolis has been many things throughout history, including a royal residence, a fortress, a legendary home of the gods, a religious center, and today a tourist attraction. It still stands proudly as a reminder of Greece's rich history, having withstood attacks, massive earthquakes, and vandalism. 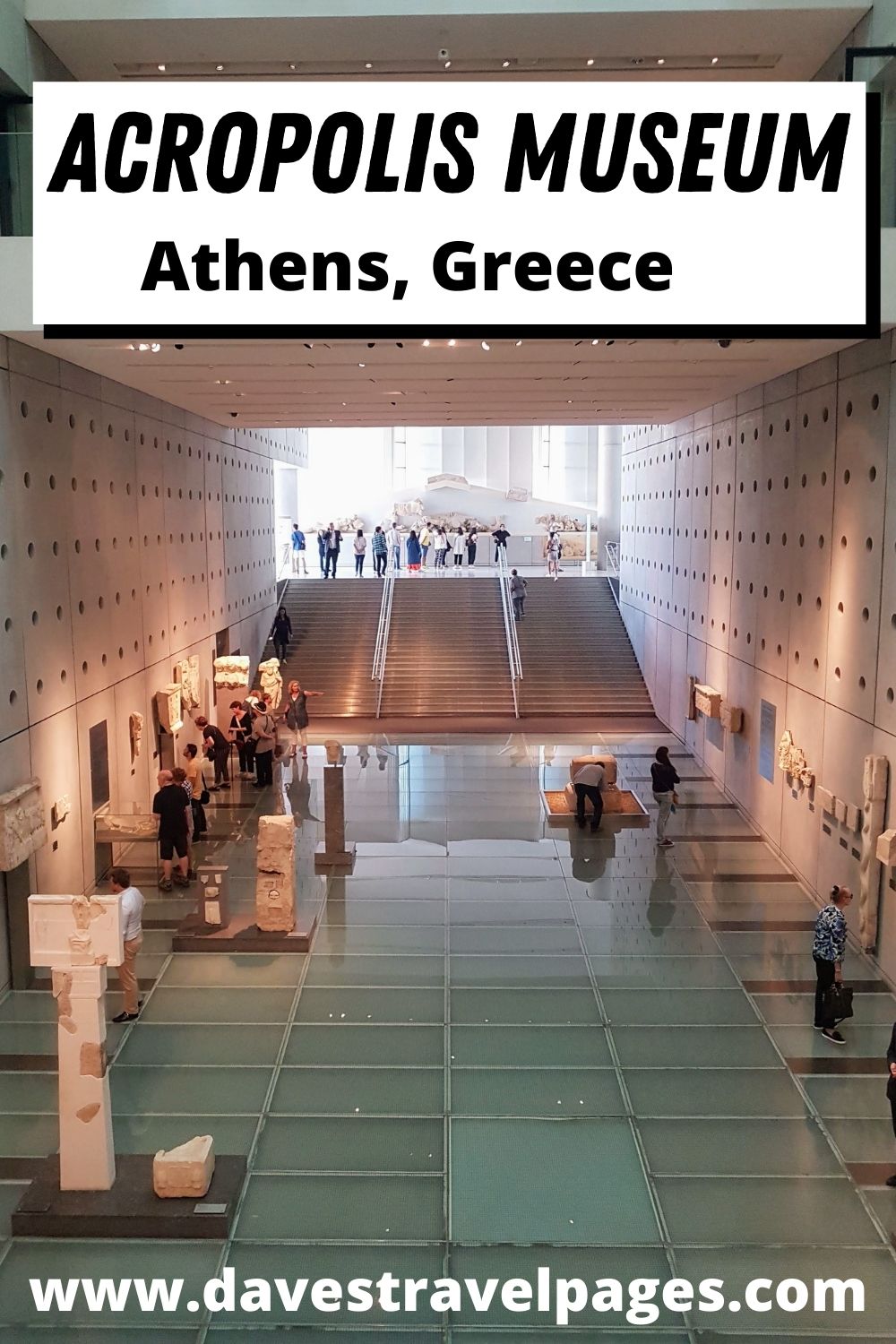 – Dave Briggs
Dave is a Greek travel blogger and writer originally from the UK, and now living in Athens. In addition to this guide and tips about visiting the New Acropolis Museum, he's created many other travel guides to museums in Athens and destinations all over Greece . Follow Dave on social media for travel inspiration from Greece and beyond: