A visit to Cape Sounion is one of the most popular day trips from Athens.  If you are interested in beaches, temples, and amazing sunsets, this half day tour from Athens is just for you! 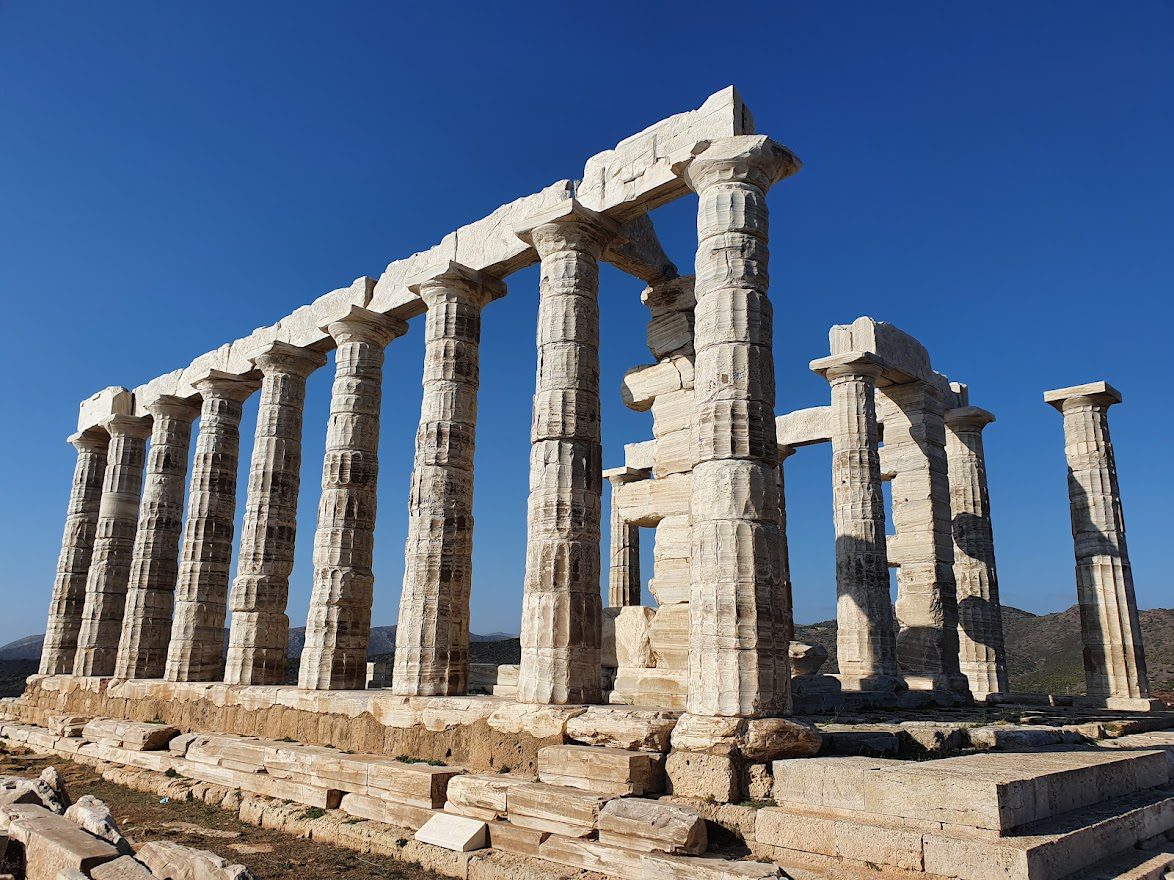 The Cape Sounion tour from Athens is a popular half-day trip normally taken in the afternoon.

I think there is definitely something special about the location the ancient Greeks chose to build the Temple. Its views overlooking the Aegean are indeed worthy of Poseidon, the Greek God of the Seas!

Whilst the temple is very interesting, as are the facts behind it like it being part of a ‘sacred triangle', for me it's really the sunset that makes the trip worthwhile. I've been there four times over the last 6 years, so there's something that makes me want to return time after time!

Interested in checking Poseidon's temple out for yourself?  There's a few different options, but a tour might be best.

Day Trip To Sounion From Athens

Due to its location, public transport to and from Cape Sounion can be a bit hit and miss. The last thing you want to do is miss the bus back into Athens after the sunset!

This means that unless you've hired a car, your best option is to take an organized tour to the Temple of Poseidon. Most tours have timings that allow for sightseeing at the temple, and then time enough to see the sunset.

There's a few different tours available to visit Cape Sounion and the Temple of Poseidon, and here's my top choice. 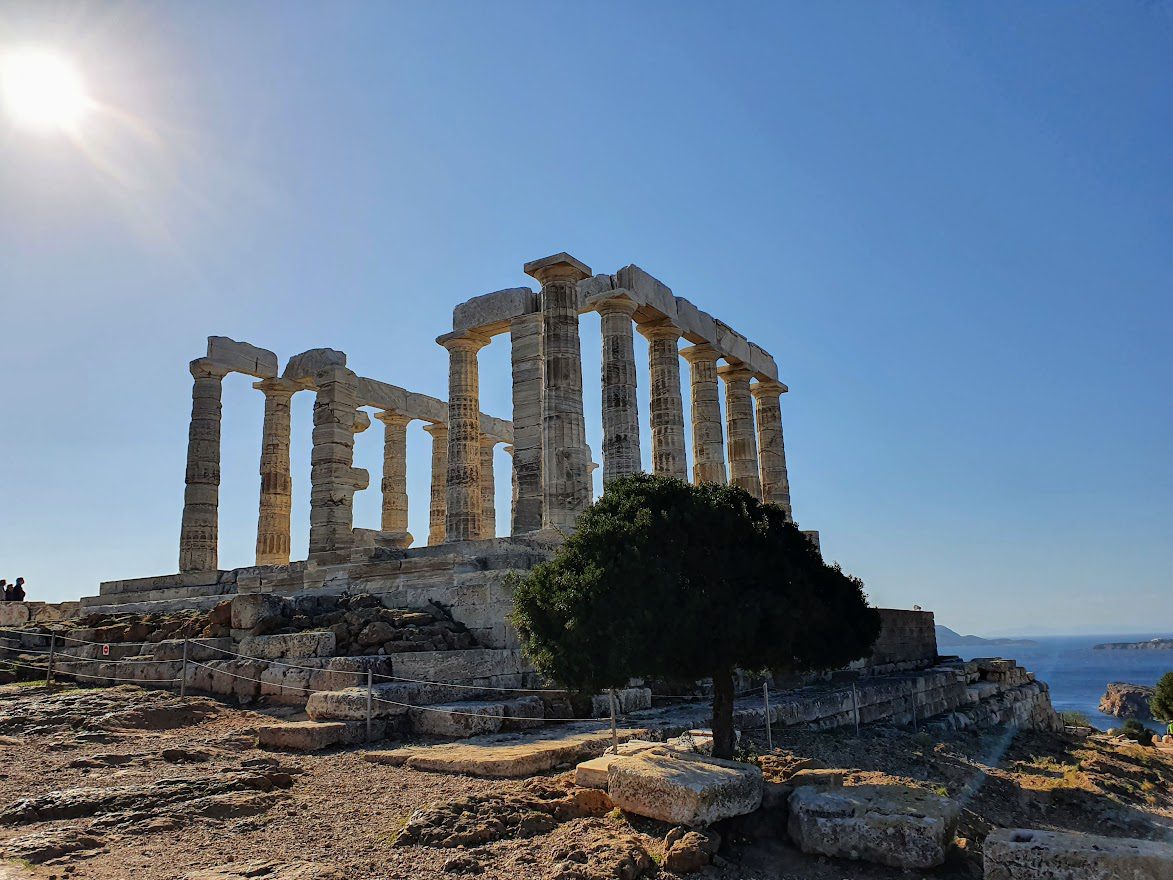 The main benefit of an organised Cape Sounion and Temple of Poseidon tour, is that all your transport needs are taken care of.

The organised tour takes this hassle away, and also gives you the benefit of a guide. There are several interesting stories, myths and legends attached to the Temple of Poseidon at Cape Sounion you might otherwise be unaware of without them. 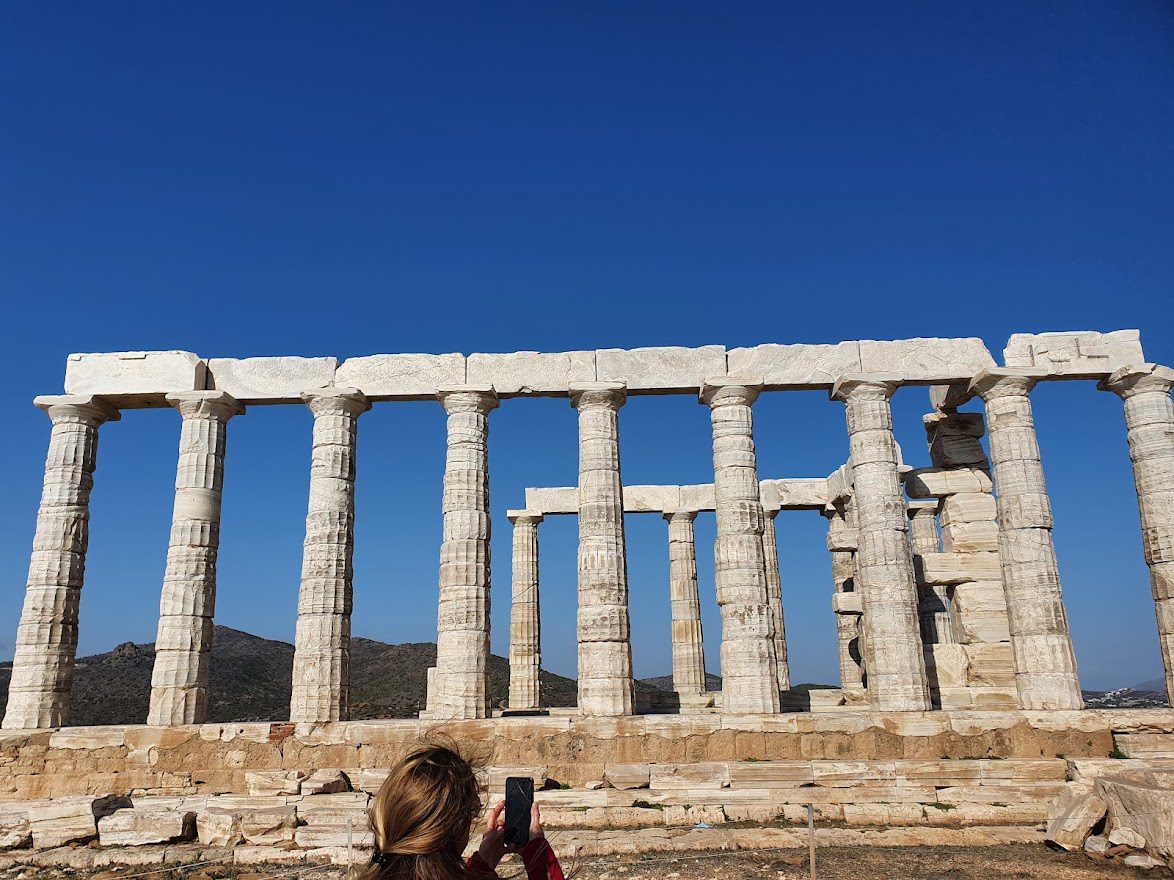 You should note that guided tours rarely include the entrance fee to archaeological sites. Your tour guide will show you where to pay on the way in.

Why take a day trip to Cape Sounion?

The main reason that Cape Sounion is a popular day trip from Athens, is because of the Temple of Poseidon. Perched high above the sea,  the temple is located at the far end of the Attica peninsula.

Once, an entire fortified city surrounded it, and in some places the walls still remain. Today, the temple of Poseidon at Cape Sounion stands as a wonderful monument to the past. It is also a great place to see the sunset.

Sunset at the Temple of Poseidon at Sounio 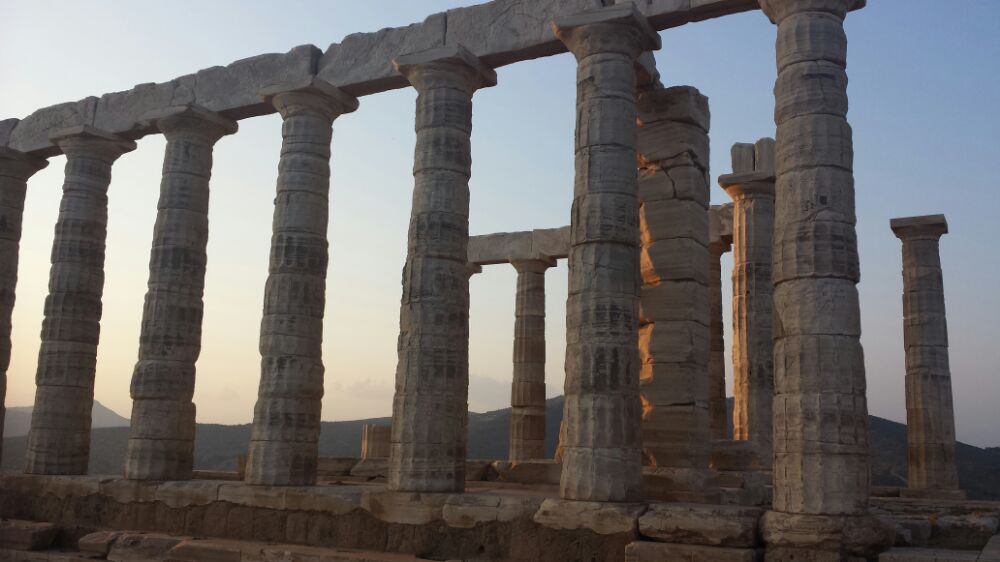 This is another reason why people should visit Cape Sounion. The sunset. There is something magical about the way the sun sets in the evening, and this is amplified at this ancient Greek site.

Although there will be many other people around, it is possible to wander off and experience the sun setting in relative calm and tranquillity. There have been a series of concrete benches made at spots around the site, from where you can sit and watch in peace.

Finally, there are some great beaches around Cape Sounion. Take your pick from organised beaches with bars and umbrellas, through to quiet bays that only see one or two people a day. I know which one I prefer!

Actually, unless you want longer at the beach, a half day Cape Sounion sunset tour is best. This way, you can have lunch at a taverna, sleep it off at the beach, go for a swim, and then see the temple of Poseidon.

I would suggest getting to the temple an hour and a half before sunset to walk around the site first. Then, you can judge for yourself where the best place to watch the sunset itself might be from. 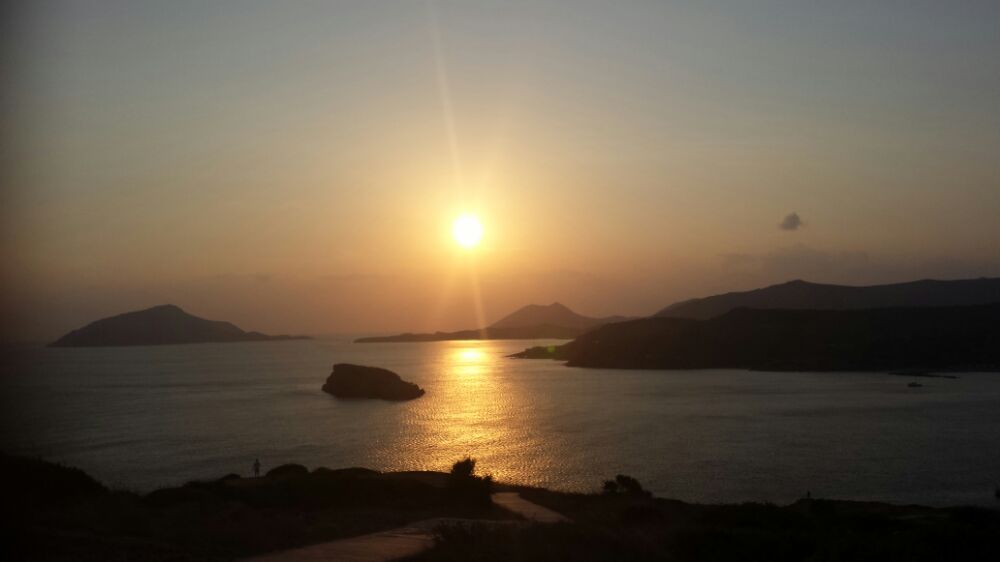 How to get to Cape Sounion

Cape Sounion is about an hour and a half drive from Athens. You can get there via an organised tour, a taxi, public transport, or by your own vehicle if you have a rental car.

If you want to take a taxi, it will be worth getting together with some other people, and negotiating the rate. By doing this, you could put your own half day tour to Cape Sounion together, which could include some beach time as well.

If you don't want the hassle of negotiating a price, you can book a private taxi via Welcome. Take a look here: Taxi trip to Sounion

If you are taking public transport from Athens, then you can catch a bus from the Mavromateon bus terminal near Victoria Metro Station. Just ask around for where the bus leaves from when you are there.

Be careful when coming back though. You don't want to miss the last bus, as it's a long walk!

If you have your own transport, the drive along the scenic coastal road from Glyfada, south of Athens, can be a very nice one.

There are some idyllic beaches to stop off at along the way, and a few very nice tavernas to get fresh seafood meals for lunch!

It's about a 60 km drive, but allow for at least a couple of hours for lots of photo opportunities. Longer if you want to stop for a meal or swim at a nearby beach.

There's free parking at the site, and keep your eye out for a rather silly one way system which is very counter-intuitive. You'll see what I mean when you're there!

If you are traveling Greece with your own hire car, you might want to combine a visit to Sounion with Vravrona Archaeological Site. 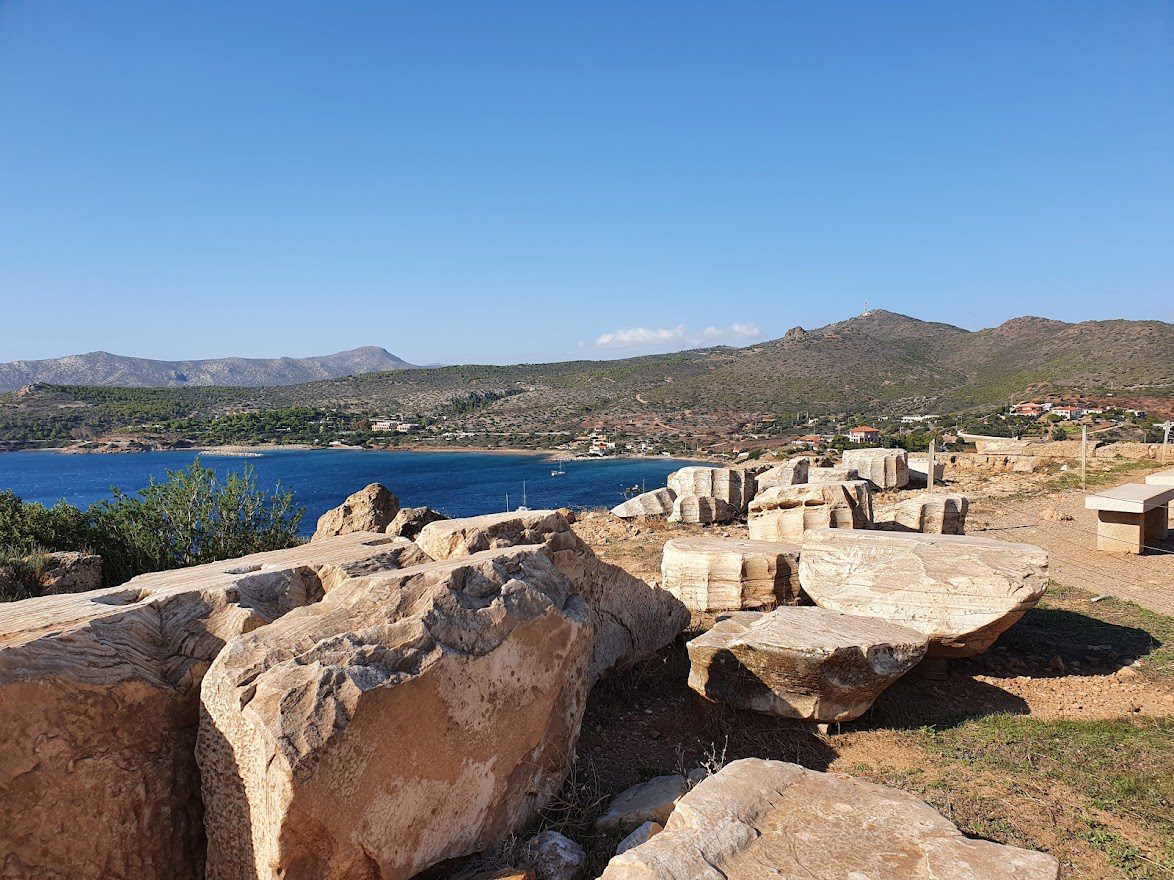 The archaeological site at Sounion is one of the very few to have the same opening hours throughout the year, which are 09.00 in the morning until sunset.

Entrance fees are 10 Euro for a full ticket and 5.00 Euro for reduced. There are also some free admission days you might want to be aware of:

FAQ About a Half Day Tour To Sounion

Readers planning to take a Temple of Poseidon half day trip often ask questions similar to:

Is the temple of Poseidon worth seeing?

Taking a Cape Sounion Tour is a great way to experience a unique sunset at the ruins of an ancient Greek temple overlooking the Aegean Sea. You get the chance to see a majestic temple, and you'll be back in Athens just as the nightlife gets started!

How do I get from Athens to Poseidon Temple?

The easiest way is to take a Poseidon Cape Sounio tour, which will include transport from centrally located hotels in Athens. Alternatively, you can use public transport to visit the site, or drive if you have access to a vehicle.

Can you swim at the temple of Poseidon?

You can reach a sheltered cove by going near to the entrance of the smaller Temple of Athena at Sounion. From here, you can swim around to see the Temple of Poseidon from the water.

How do I get from Athens to Delphi?

The best way to get to Delphi, is to take a full day tour from Athens where you have the transport and a fully licensed guide as part of the package. 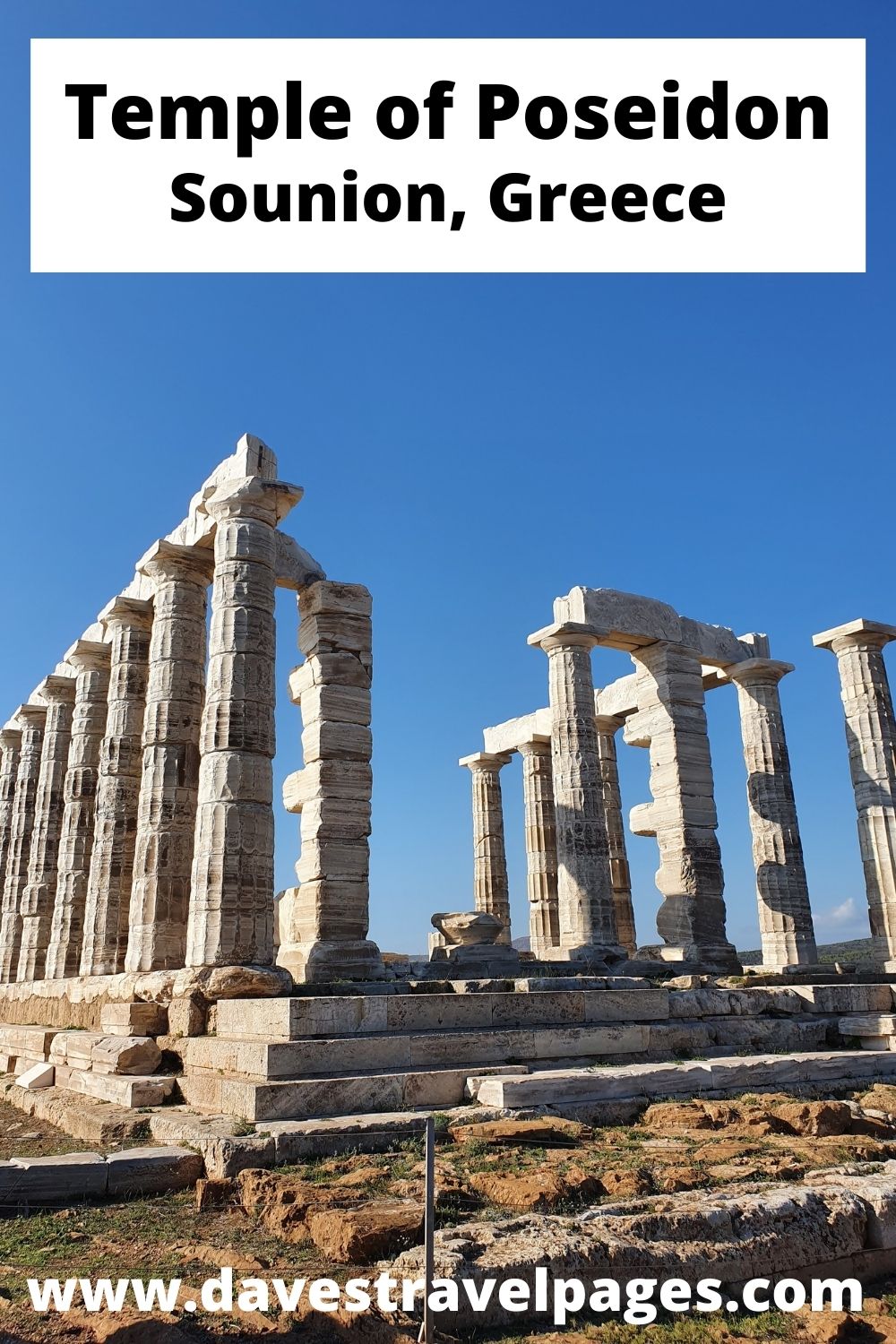 If you are looking for other things to do in and around Athens, you might find these travel guides useful:

– Dave Briggs
Dave is a travel writer from the UK who's been living in Greece since 2015. As well as writing this travel guide to Cape Sounion and the Ancient Temple of Poseidon, he's also created hundreds more travel blog posts for destinations all over Greece. Follow Dave on social media for travel inspiration from Greece and beyond: