After a few days rest, my knee felt better, so I decided to continue my cycling journey across Alaska, stopping off at Santa Claus house on the way!

Back on the Bike – Cycling out of Fairbanks, Alaska

Back on the bike again!! The few days resting up my knee did me some good, but as always on these bike tours I was keen to push on. The road was pretty easy – ie flat.

I stopped off in the small satellite town of North Pole, and visited McD's for my two McDoubles and free Mocha – Its free Mocha Monday guys!!

Hey, and don't criticise, because if we don't feed the evil corporate machine, then what will be left to fight against?? 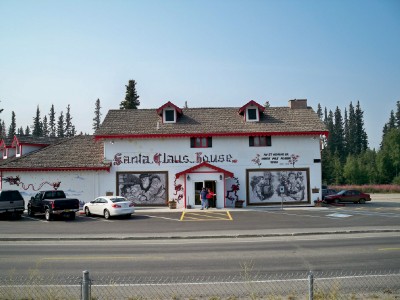 On the way out of North Pole I took a picture of Santa Claus house. I guess that if it's his holiday home, then its the most used one in the world.

My knee held up pretty well, and I reached the state recreation area campsite of Salcha River in the early afternoon. Made a campfire, finished my book on the Dalai Lama, and had an early night.

Use the links below to view more travel blog posts from this series: