In this Ortlieb Back Roller Classic review, I take a look at the most popular touring panniers on the market. Long distance cycling enthusiasts including myself swear by them. Here's why. 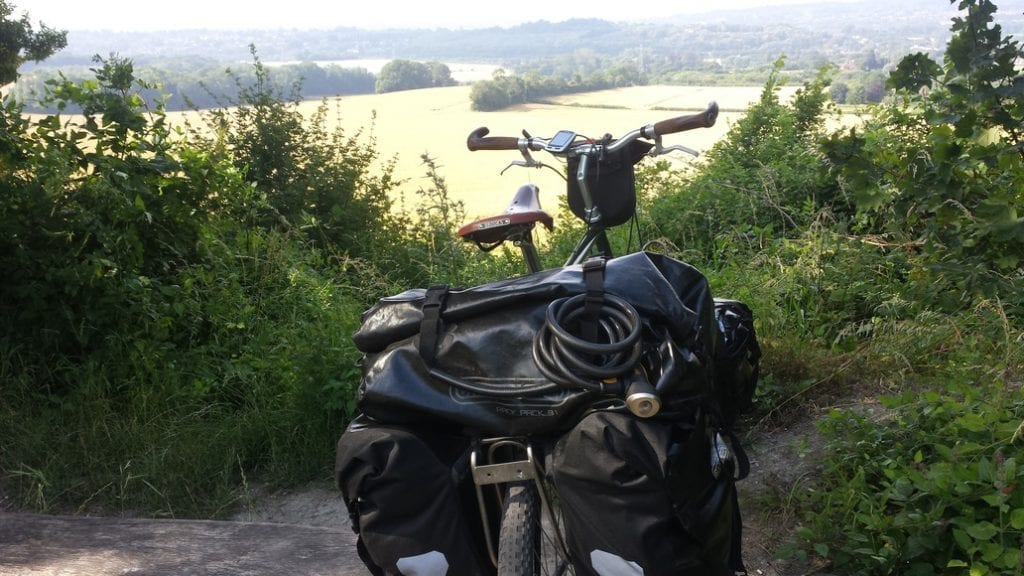 When it comes to bicycle touring panniers, the Ortlieb Back Roller Classic panniers range is the first and only choice for many cyclists.

This isn't because there are no other makes of bicycle panniers available, it's simply because they are the best.

I really mean that, and before anyone mentions it, no I have no affiliation with the company. (Although I wouldn't be adverse to Mr. or Mrs. Ortlieb getting in contact to arrange something!). Why do I think Ortlieb bike bags are so good? Read on…

As with all my bicycle touring tips, I've arrived at my conclusions by using these bike touring panniers myself over extended periods of time.

The last major long distance bike tour I used these panniers on, was when cycling from Greece to England. Even on that bike tour, the panniers were already 5 or  6 years old! Since then, I have also used them on smaller one month bicycle tours such as cycling in the Peloponnese of Greece.

In my opinion, there are several factors that help make these bicycle panniers stand out from the crowd.

In short, these are the simplicity of the pannier design, quality of materials, quality of construction, and value for money. Get these things right in any product, and you are on to a winner, which Ortlieb clearly are here. 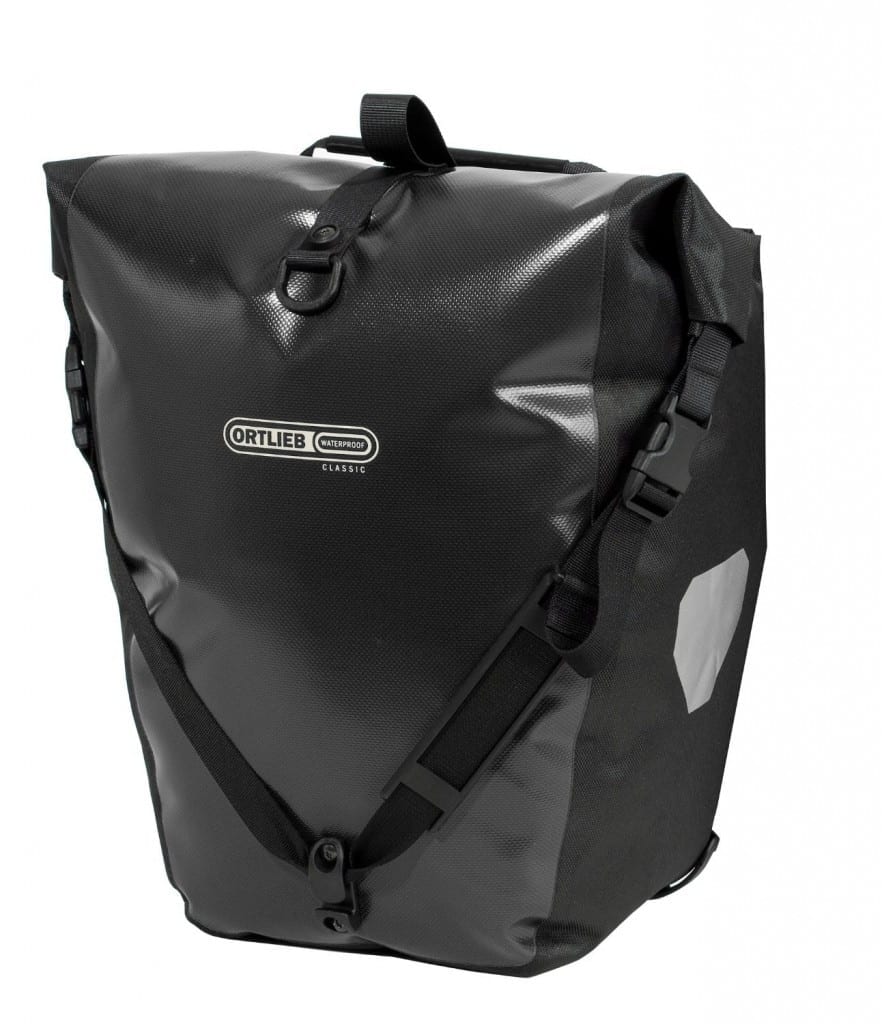 They have also avoided a fundamental error which many companies make, which is to fix something that isn't broken. By this, I mean that the design works the way it is. There is no need to keep changing it every year in the hope of getting more sales.

So, there are no massive differences in design from one year to the next. This is handy for me, in that this review will still be relevant in a few years time.

It's probably bad for Ortlieb though, in that the Ortlieb Back Roller Classic panniers are well made, repeat custom is not exactly frequent. These Ortleib bicycle panniers are designed to be tough and endure the rigours of around the world cycling. They last for years!

Mounting System on the Orltieb Panniers

I think for me, one of the things that elevates the Ortlieb Back Roller Classic panniers above the rest, is the mounting system. Put these panniers on your bike racks properly, and they will NOT fall off!

Other manufacturers who have tried to copy the latch system (and will remain nameless for now), have made some abysmal attempts to emulate Ortlieb and failed.

This is probably due to the QL1 system which Ortlieb use, and I believe have patented. (There are also QL2 and even Ql3 mounting systems I understand). 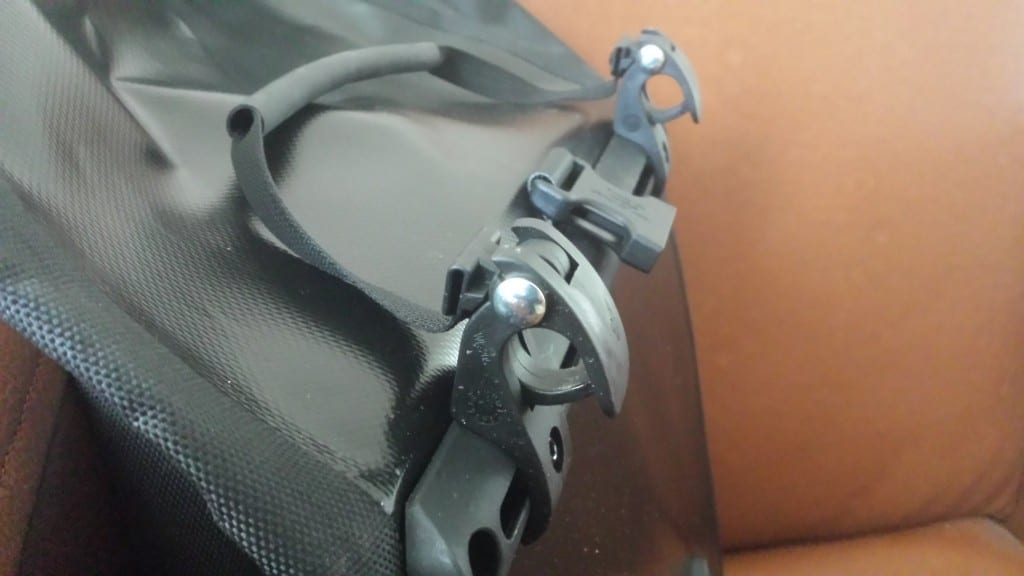 How to fix Ortlieb Panniers to the rack

From the photo above, you can make out the handle and the mounting points which are attached to the panniers.

By pulling the handle up, the mounts open, and they can then be placed onto the rack rails. The mounts close again when the handle is released.

On the back of the panniers, is another fixing point which slides behind the racks metal supports.

In fact, writing about how to attach these bicycle panniers to the bike rack properly is a great deal harder than doing it. It's the easiest thing in the world.

One note – make tightening the bolts on the back of the panniers with an allen key a reasonably regular thing. They do become loose over time with all the bumping around which goes part and parcel with bicycle touring!

The Ortlieb panniers are really waterproof

Of course, the big selling point of the Ortlieb Back Roller Classic bicycle panniers, is that they are incredibly waterproof. I've never actually thrown one in a river, but I have certainly cycled through torrential rain for hours on end to find everything inside nice and dry. I've even hosed my bike complete with panniers down in a car wash, and they have let no water in!

Sometimes, you buy something which says it's waterproof, only to be let down later. Believe me, this does what it says on the packet!

This is due to a combination of the material used, and the simplicity of the design. I'm not going to get into the technical details of the materials, but it is some form of PVC coated polyester.

As the name suggests, these Ortleib bags have a roll top closure, ensuring that water can not enter. Again, this is simple, but effective. A nice touch, is that the securing strap which helps keep the roll top closed also doubles as a carrying strap.

What I think about Ortlieb Panniers

The Ortlieb Back Roller Classic panniers come as a pair, and have a carrying capacity of 40L. They have a small inner zipped mesh pocket, attached to a larger inner pocket, which in my opinion is a bit useless.

That said, I always find something to put in them sooner or later when on tour! All versions of these panniers have reflective strips, which means they will show up well in car headlights in the dark.

They also come with extra inserts for the mounting system, because not all racks have the same diameter metal struts.

That just leaves us with the issue of price. In the UK, they seem to average out at about £100. In preparation for my next cycling trip though, I have been keeping a spreadsheet of all the things I need to buy, and have been updating it every month.

Retailers seem to reduce the prices every now and again, and I picked up a brand new pair for £85, which is a bit of a bargain! 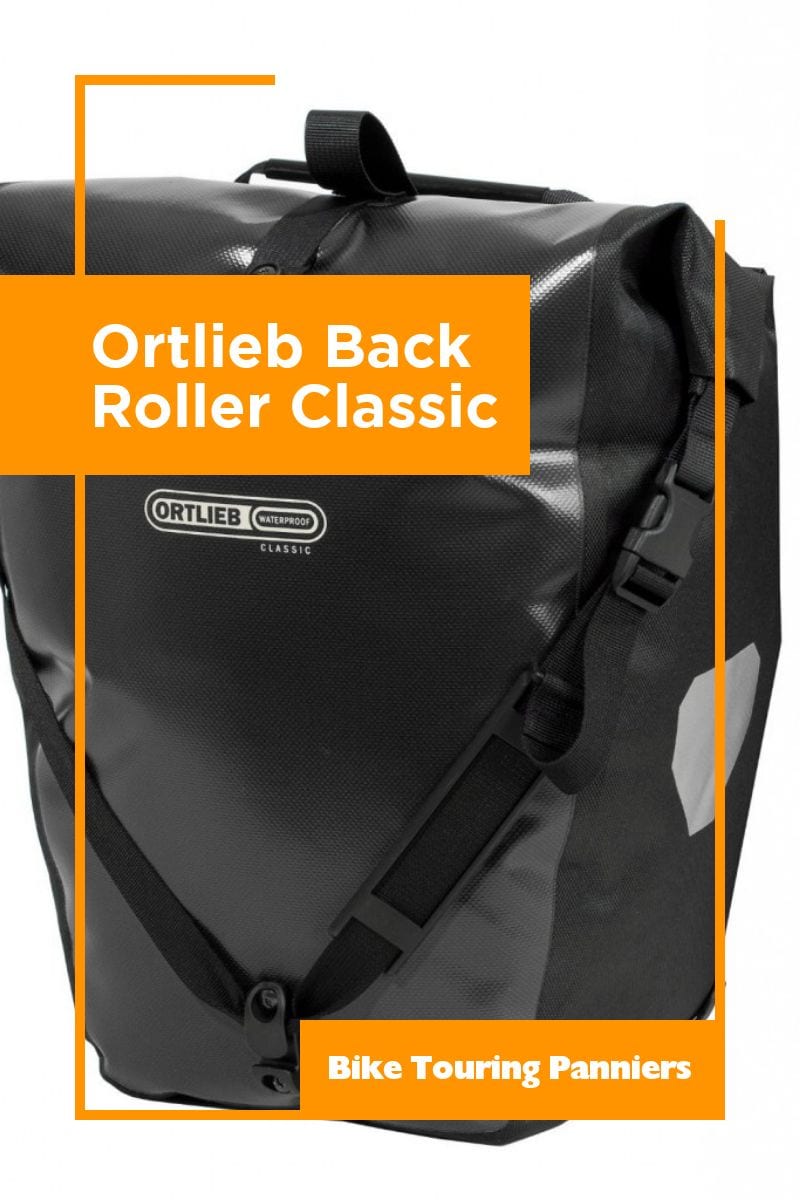 Are Ortlieb bags worth it?

Ortlieb offer a solidly designed and well manufactured bike touring pannier that stands the test of time. Although initially more expensive than other panniers for touring, Ortlieb bags repay themselves over the years of use you'll get out of them.

How do Ortlieb panniers attach?

The Ortlieb panniers attach to the racks of a bike by a clipping system. There is also a small hook which then slides against the rack which ensure that the pannier does not ‘flap' against the side of the rack.

What is the difference between Ortlieb Classic and City?

Although they look similar, the Classic designed panniers are able to hold more volume than the City panniers, although they do weigh a little more. The classic also has a shoulder strap, which in actual fact most cyclists use to hang clothes to dry from when cycling, whereas the City do not.

What are the best bike panniers?

Any good bike pannier will be waterproof, well made, long lasting, and reliable. Ortlieb have stood the test of time, and tens of thousands of people who travel by bike use their products.

If you found this guide to the Ortlieb back roller classics useful, you might also like thee other bikepacking guides:

– Dave Briggs
Dave has biked around much of the world on different long distance cycling trips, including from Alaska to Argentina, and England to South Africa. In addition to this Ortlieb pannier bag guide, he's written many other guides to bike touring.