Chiang Mai might be sold as the perfect destination for digital nomads, but some months are better than others. Here's the best time of year to visit Chiang Mai in Thailand. 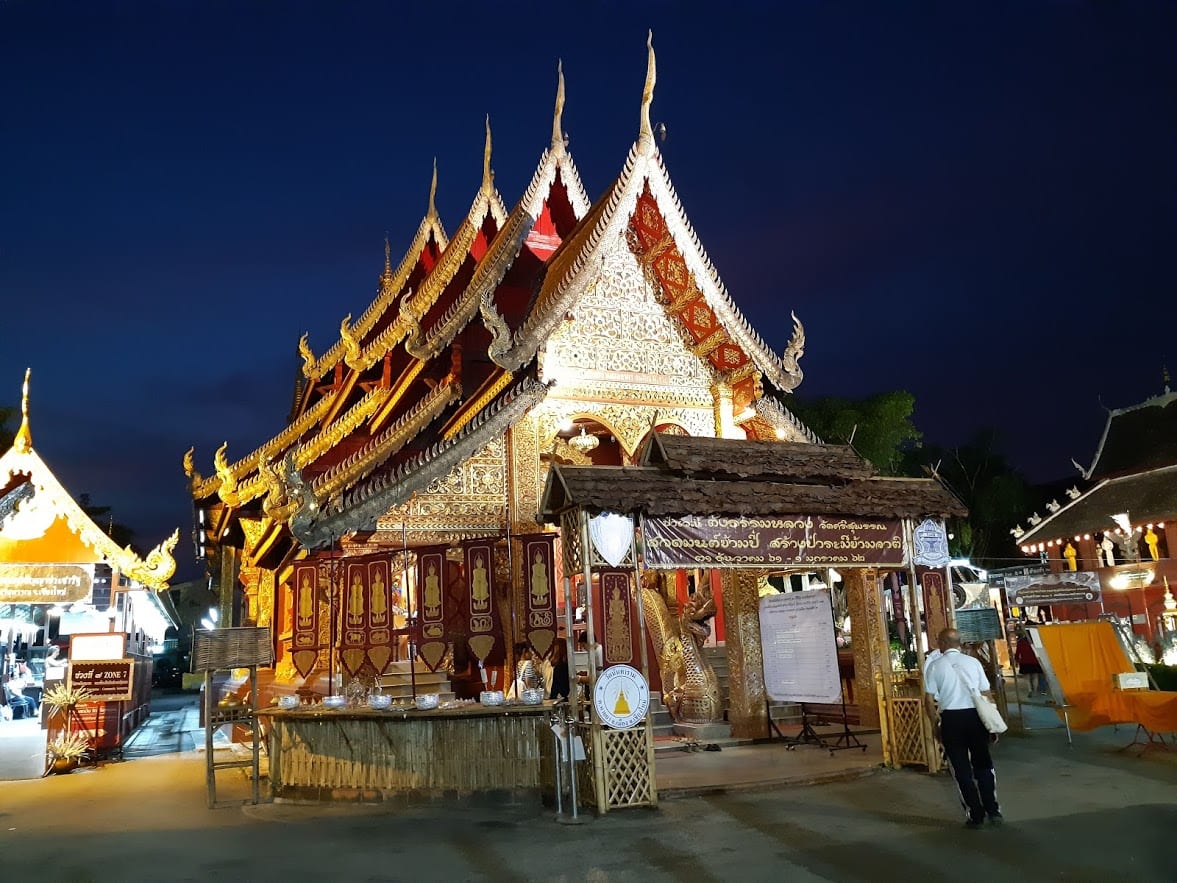 During our longer trip to SE Asia, we spent a few weeks in Chiang Mai in January 2019.

In our experience, it was a pretty good month. Read on to find out more!

Chiang Mai is the biggest city in Northern Thailand. It’s a few hours away by bus from the borders of Laos, to the East, and Myanmar, to the West.

It sits at an altitude of about 300 metres, and it’s surrounded by mountains and National Parks. As a result, it has a cooler climate than other cities in Thailand, like for example Bangkok.

This is not to say that Chiang Mai has an entirely cool climate – quite the opposite. The weather in Chiang Mai is best described as tropical, ranging from pleasantly warm and dry to unpleasantly hot and humid throughout the year.

That said, the weather in Chiang Mai is generally less humid than other parts of Thailand.

You could say that Chiang Mai has three distinct seasons:

Note that the temperature drops considerably during the night throughout the year. Still, don’t expect super low temperatures, unless you are going to a shopping mall.

Our advice – do not underestimate the power of air-condition and bring a jacket and long trousers.

Another thing to take into account if you are planning a trip to Chiang Mai is the so-called smoky season. We had barely left the city at the end of January, when we started reading reports about bad air quality in the city.

Apparently, from February to April, large amounts of crops are burnt down close to Chiang Mai. The resulting smoke gets into the city, making it hazy and uncomfortable to say the least.

Independent farmers, as well as also large corporations in the corn industry, have been blamed for the excessive air pollution in Chiang Mai, along with random forest fires and pollution caused by the increasing number of vehicles.

Whatever the reason behind it, the consequences are dire for locals and visitors and hopefully a solution will be found soon.

You can see some dramatic photos in this article and then decide for yourselves if you want to visit Chiang Mai in February, March or April. We wouldn’t!

When to visit Chiang Mai? – The dry and cool season (November – February) 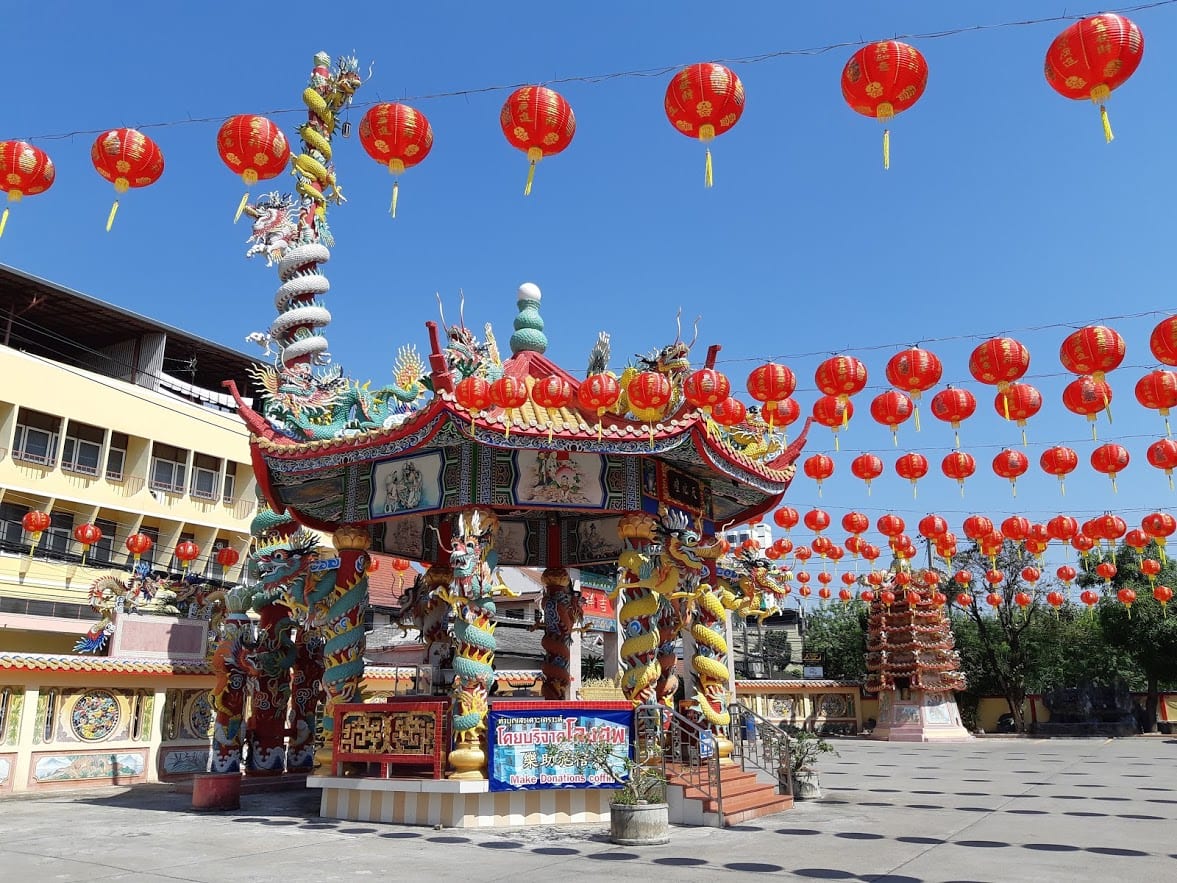 This is the best time of year to go to Chiang Mai. This is the so called Chiang Mai “winter”, which has the best climate you can get in this lively city. Don’t expect anything like the winter anywhere in Europe though. Daytime will be nice and sunny, with maximum temperatures averaging at around 29-30 degrees, while evenings are considerably cooler.

In our experience, the weather in January in Chiang Mai was very pleasant on the whole. That said, walking under the midday sun was a challenge on two or three occasions and we found that sunscreen and a hat were necessary. Thankfully, inexpensive juice corners exist everywhere around the city when you want an iced drink.

We had read that the average low temperature in January is supposed to be about 15 degrees, but I don’t think we experienced anything lower than 19-20. As a result, we didn’t really need a jacket on most evenings – apart from when we went to the fully air-conditioned cinema.

For all these reasons, this is the most popular time of year to visit Chiang Mai, and as such you might want to look into accommodation well in advance.

When should I visit Chiang Mai? Dry and warm season (March – May)

During those months, temperatures start to rise, reaching an uncomfortable 36 on average, for the month of April. Combined with the crop burning as described above, this is definitely not the best time to visit Chiang Mai. In fact, most expats leave the city during that time, so we generally wouldn’t recommend visiting Chiang Mai in March or April, unless your only plan is to hike on the nearby mountains.

The only exception to that is if you want to experience the Songkran festival, celebrating the Thai New Year from 13-15 April. For more on this, see below.

When is it best to visit Chiang Mai? Rainy season (May – October)

From May to October, Chiang Mai faces the monsoons and whatever comes with them. With May being the shoulder month between the dry and wet season, the locals start preparing for a long, rainy period with high temperatures and electric thunderstorms.

During the rainy season, temperatures in Chiang Mai are still high, averaging at about 30-32 in daytime and 24-25 in the evening. However, the frequent storms help cool it off, offering a pleasant break from the sun. While the everyday rain is definitely an inconvenience, especially if you are visiting for just a few days, it typically lasts for an hour or two, so it shouldn’t affect your trip too much.

On the other hand, if you are basing yourself in Chiang Mai for a slightly longer period, the rainy season isn’t a bad time to visit. There will be fewer tourists, and therefore you will have a better choice of accommodation. In fact, it might even be the best time to visit Chiang Mai if you want to focus on work.

When planning your trip to Chiang Mai, bear in mind that there are plenty of traditional festivals happening throughout the year. Depending on when you visit, you may come across one or two – or you can plan your visit to Chiang Mai to coincide with one of them. Here are some of the most important festivals in Chiang Mai. 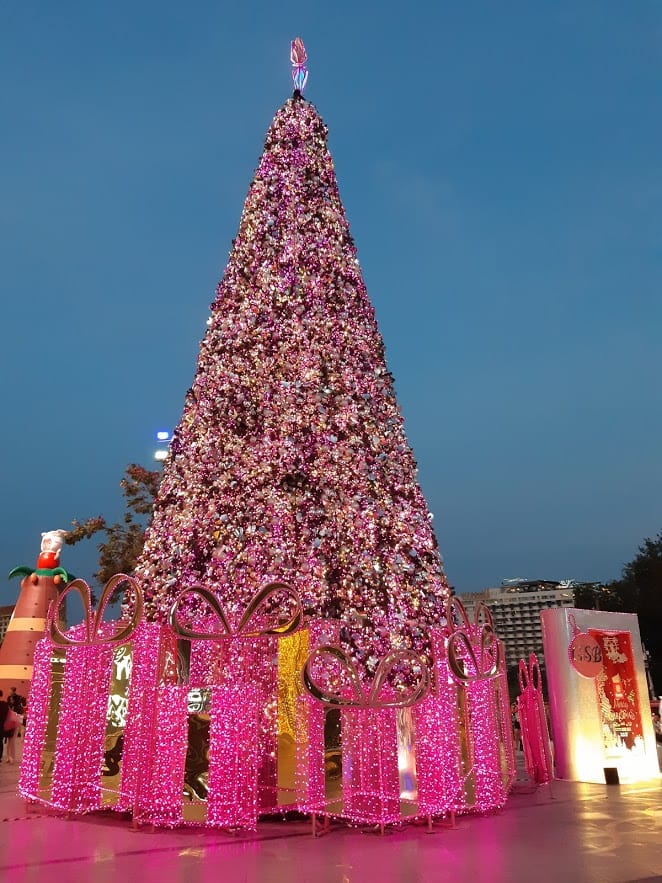 Cherry blossoms viewing. This is not exactly a festival, but really a fantastic time to visit Chiang Mai, as the nearby mountains fill up with the lovely cherry blossoms for a few weeks. Christmas isn't a big thing for obvious reasons, but you might find the shopping mall has some extra decorations. 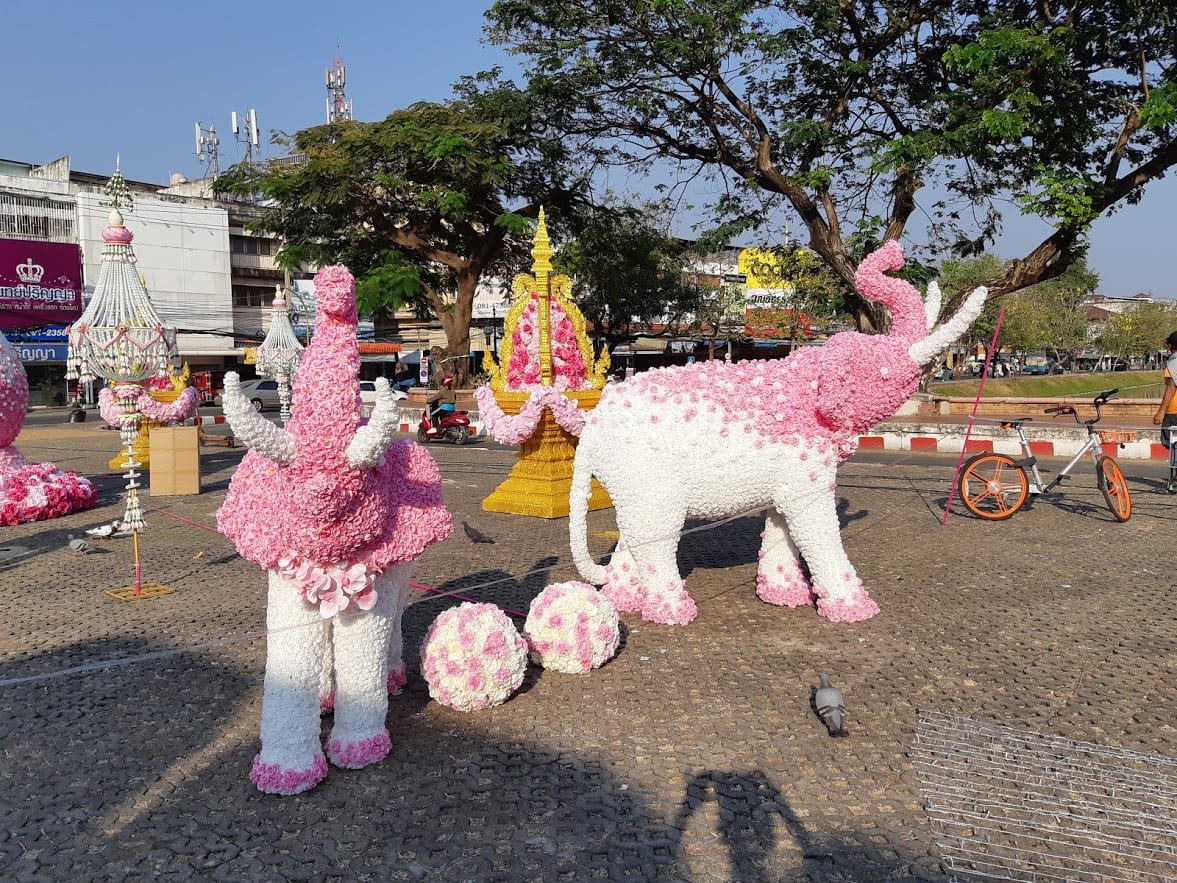 The flower festival, happening everywhere in the Old Town. As we literally flew out of Chiang Mai on 31 January, we didn’t get to see the parade that happens on the first weekend in February. We only saw some of the preparations for it, and they were pretty amazing!

The highlight of this month is Songkran, the Thai New Year festival, happening from 13-15 April. Although this is not the best time to be in Chiang Mai because of the heat and pollution, this festival is not to be missed if you are anywhere in Thailand.

During this three-day festival and national holiday, the country celebrates with temple offerings, traditional parades, and the famous water festival, with people throwing water on each other. You can experience this anywhere in Thailand, but if you are in Chiang Mai it will be a pleasant break from the scorching sun. Be prepared to be splashed!

May – June in Chiang Mai

During the Inthakhin Festival, the locals pay their respects to the city’s guardian deities. Inthakhin means “city pillar”, and for Chiang Mai this is the massive temple of Wat Chedi Luang. The exact day varies from year to year, so you should ask around and make sure you visit the temple for the offering ceremonies and procession. 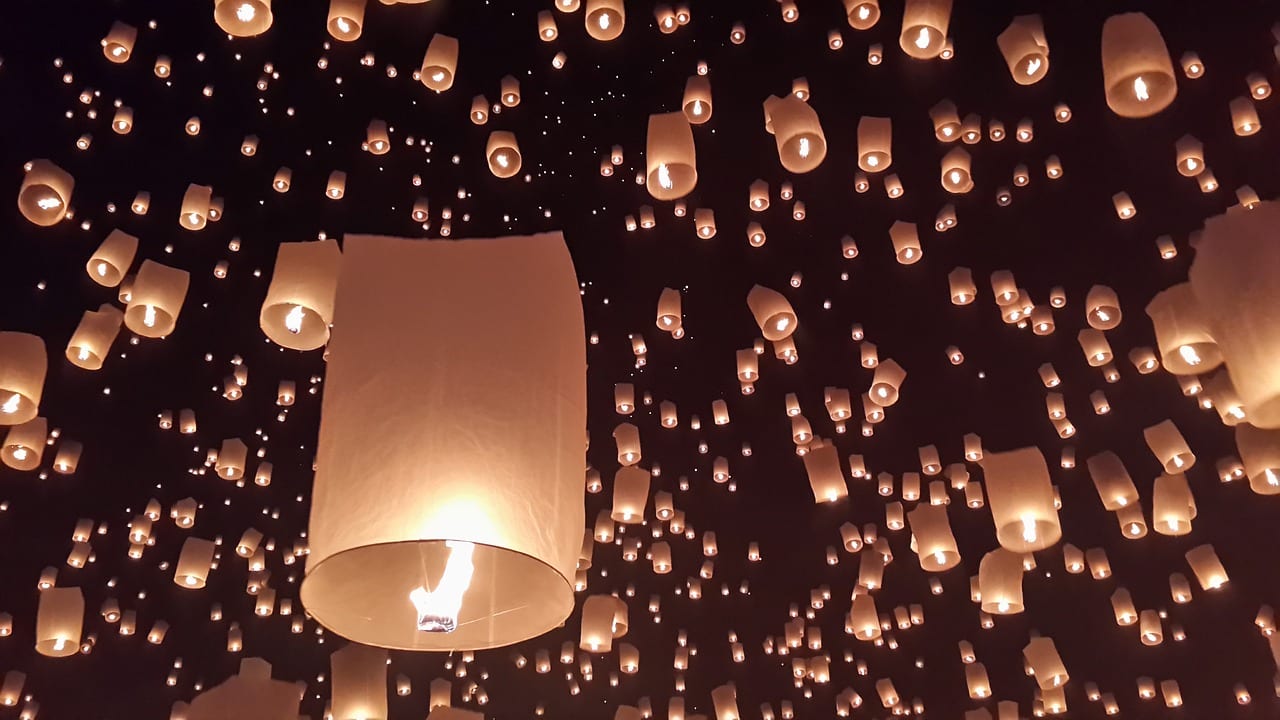 The lantern festivals of Chiang Mai, Yee Peng and Loy Krathong, are celebrated jointly in Chiang Mai and the whole of Northern Thailand. The celebrations take place on the full moon of the twelfth lunar month, which is normally in November. During these festivals, locals light up little floating lanterns (krathongs) and release them into the Ping River and to the sky, while wishing for good fortune for the next year.

In anticipation of the festivals, people decorate their houses and streets with colourful flags and lanterns. On the evening when the lanterns are released, the city is completely lit up, and the sight is really amazing. There are massive parades and shows happening all over the city, and it’s an all in all festive time of year that you can’t really miss if you are visiting Chiang Mai in November.

A great spot to observe the festival from is either one of the bridges over Ping River, like Nawarat Bridge, or perhaps one of the outdoors or rooftop bars in the Tha Pae Gate area.

How long to spend in Chiang Mai

It really depends on what your travel plans are. I'm probably going to go against the grain by saying if you only have a couple of weeks in Thailand, you might want to skip it altogether. I mean, it's a nice place, but not something that I believe you should go out of your way to see. Read more here – How many days in Chiang Mai is enough.

Conclusion – Which month is best to visit Chiang Mai?

We only have personal experience of visiting Chiang Mai in January, and we can totally recommend it as the best month to visit Chiang Mai, closely followed by December and November. If you are going in November though, book your accommodation well in advance, as rooms quickly fill up due to the Yee Peng and Loi Krathong festivals.

We would definitely avoid the smoky season, i.e. from February to April, as well as the rainiest months, July, August and September. 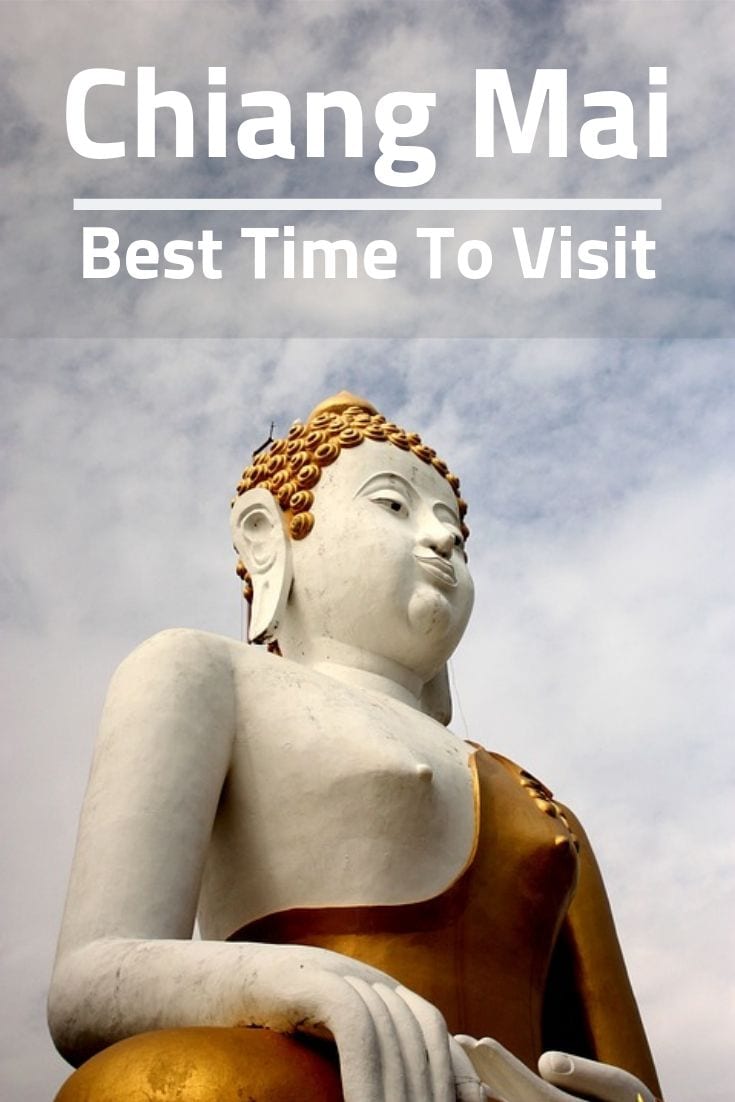 When to go to Chiang Mai FAQ

What is the best month to visit Chiang Mai?

Between October and April is the best time to visit Chiang Mai. The weather during this period is mostly cool and pleasant, with a light breeze.

Is it cold in Thailand in January?

January temperatures in Thailand's northern mountains and central plains are relatively cool, at least compared to other times of the year. Temperatures can reach as low as 70 degrees Fahrenheit in Bangkok, and can drop to 57 degrees in the mountains with highs of around 84 to 90 throughout both areas.

Which part of Thailand is best to visit in January?

Chiang Mai and the surrounding area is a good region to visit in January, but of course, there's no beach! If swimming and sunbathing are a priority, try the Andaman Coast.

What is the coldest month in Chiang Mai?

January is the chilliest month, and at night, temperatures can get down to 15 degrees. During the day, you may still find it pleasant and warm though.

What is the average temperature in Chiang Mai in January?

You will experience highs of 29° and lows of 14°during the month of January.

Have you been to Chiang Mai, and what was the weather when you visited? Let us know in the comments.