Here is my bicycle touring gear list I used on a one week cycle tour around the Fens area of England. I was very happy with how it performed, and the bike tour was awesome! I used the majority of this bike touring gear on a later bicycle tour from Greece to England. 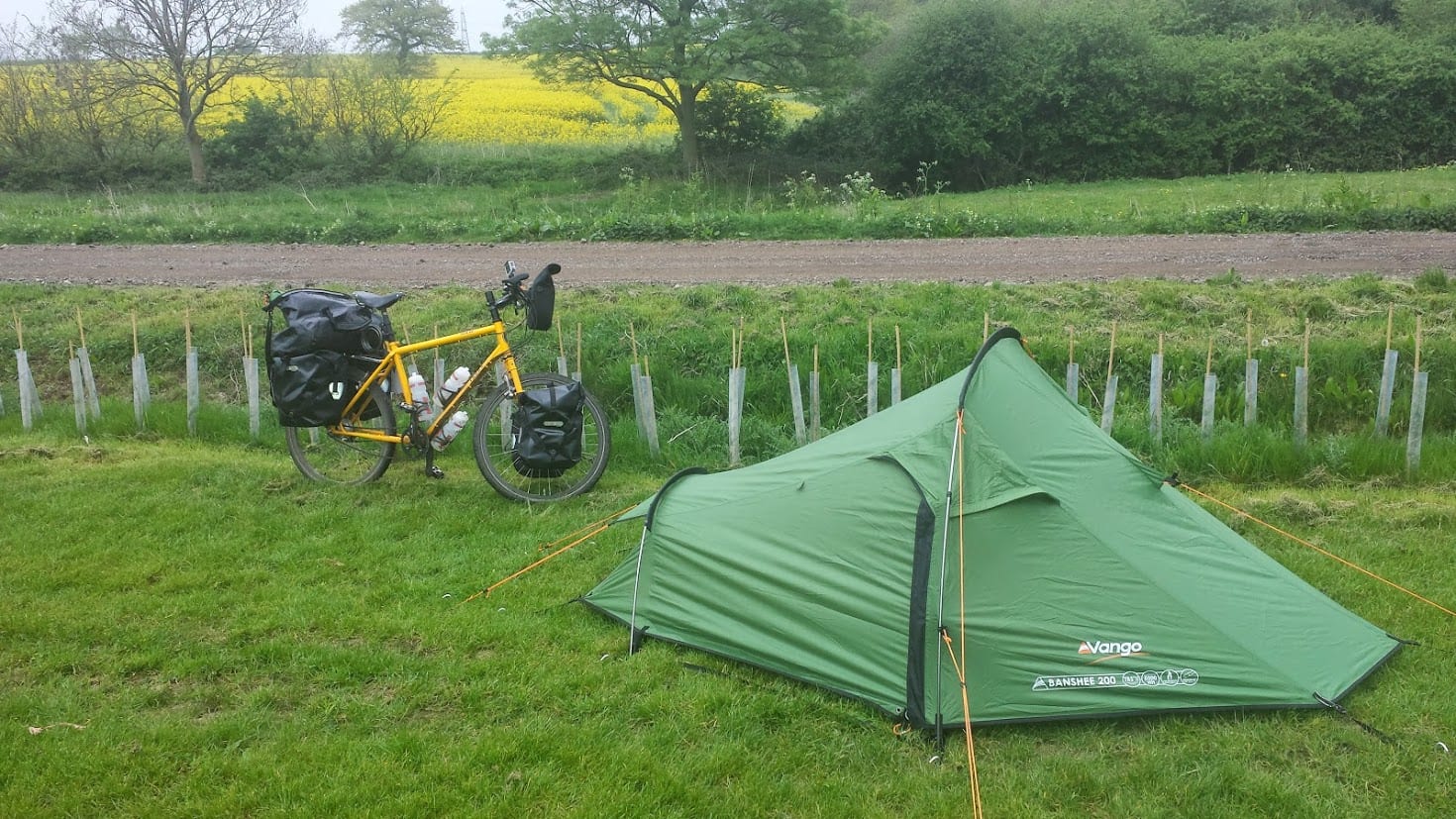 One of the reasons for cycling around the Fens for a week, was to test new bits of gear out. I wanted to see how each piece performed, so that I could come up with my ultimate bike touring gear list.

In the end, everything performed so well, this bicycle touring gear list ended up being almost my definitive kit. Obviously, each bike tour is different though, and so small alterations are made here and there depending where I am in the world.

Hopefully, this list of bike touring gear can help you if you are planning your own trip. As well as the list itself, I have also made a YouTube video.

It has proved to be quite popular over the last couple of years! – Bicycle Touring Gear for a One Week Cycle Tour. For more tips on touring, check out my bicycle touring tips.

I am riding a custom built Thorn Nomad touring bike with Rohloff hub, which has good quality racks both front and back. A Brooks saddle will keep my butt happy. The bike's name is Bea, by the way.

I will be using panniers rather than a trailer for this one week cycle tour of the Fens. Ortlieb Classic's feature in almost every cyclists bicycle touring gear list, and they do so in mine as well.

I will be using panniers on both the front and back, and  will also be using an Ortlieb Rackpack which will provide additional room. An Ortlieb compact handlebar bag on the front completes the ensemble.

As the bike is in good condition, I will only be taking a minimal bicycle toolkit for this one week tour. Most of the bike tools I should need will be on my multi-tool.

I will be camping every night on this cycle tour around the Fens, which should give me a good chance to test out the following gear. 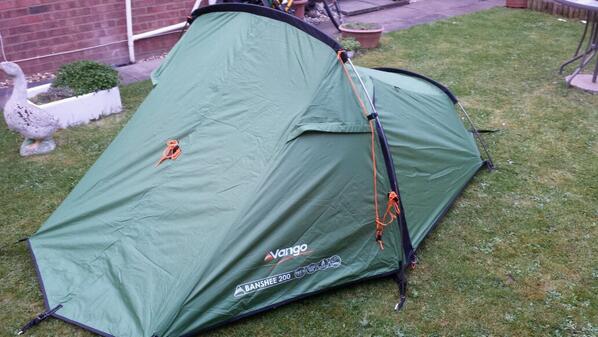 As I am camping, I will also be cooking for myself on the road. (Although I do foresee fish and chips, full English breakfasts, and other treats on the way!). As I'm only away for a few days no need for water purification on this trip.

I normally aim to carry approximately three or four days food in my panniers when bicycle touring. These are the items that I will actually leave the house with, and I will stock up with extra food as and when needed along the way. You can read up here about the best foods for bicycle touring. 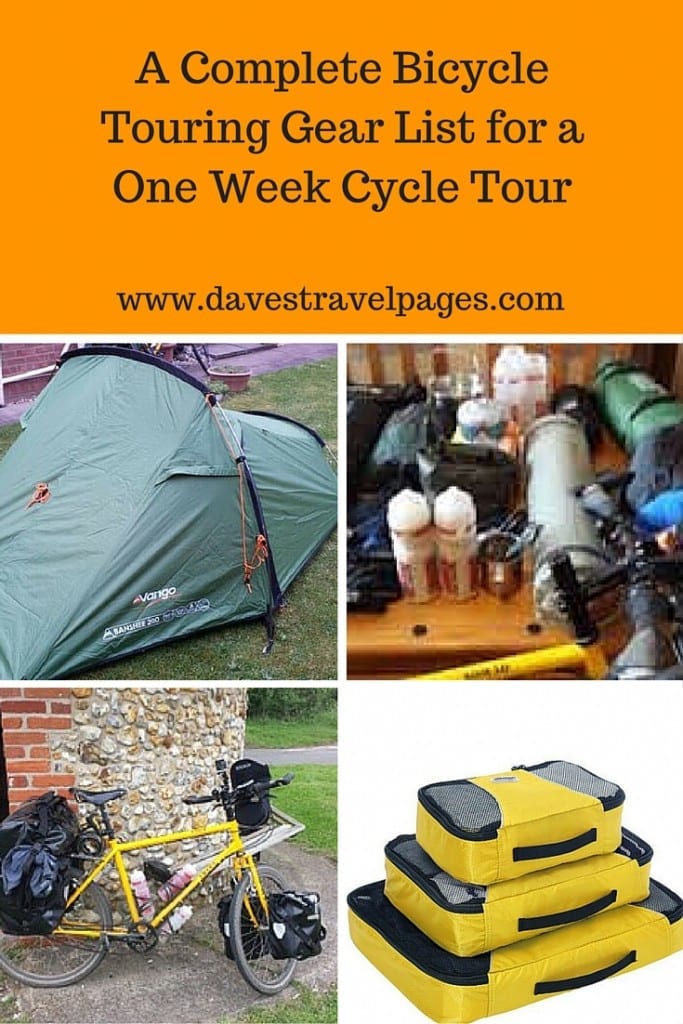 No bicycle touring gear list is complete without including the cycling clothes! The UK is famed for its varied weather, and so I have packed a range of clothes to see me through warm, cold, and wet days.

There is no need to take the laptop for this week long cycling tour, but the list of electronic gear is still pretty big. Amazing to think that on my first cycling trip around New Zealand, not one single piece of tech featured in my bicycle touring gear list!

Additional – You will probably spot that I have not included a camera on this list. I wanted to take one, but managed to drop and break it a couple of days before I left. Thankfully, my phone has a pretty good camera.

No doubt there are a few odds and sods that I have forgotten to include in this bicycle touring gear list, but this is about as thorough as I can come up with! Looking forwards to trying it all out 🙂 Here's that YouTube video.

Bike tourers are always trying to refine the kit they use and how much space it takes up. Here's some frequently asked questions that bicycle travelers have when planning for a long trip:

What gear do you need for bike touring?

Depending on the length of your bike tour, you might want to take camping gear, spare parts, cooking kit, and spare clothes.

Can any bike be a touring bike?

While specifically designed touring bikes are better when it comes to touring, you can really go on a bikepacking trip with any type of bike. The shortcomings of lower quality and non specific touring bikes become more apparent the longer the tour is.

What is touring on a bike?

The term ‘bike touring' refers to either touring on a bicycle or taking self-contained cycling trips for pleasure, adventure, or independence rather than sport, commuting, or exercise. Trips can range from single days to multi-day excursions and even years long journeys.

How should I dress for a road bike for touring?

The clothing you use when riding bikes on a long distance tour will vary depending on weather conditions and cultural sensitivities of the countries you are cycling. A pair of comfortable padded shorts is always a good choice though!