This bikepacking blog entry was written by Cat, as part of her bicycle tour along the Eurovelo 8 route. Here's her experiences from the day's bike ride.

I’m afraid the past couple of days have been all a bit negative, whining about mountains and even about valleys. No longer! After a hearty breakfast of leftover tofu spring rolls, yoghurt and fruit (Zeljko insisted that I eat, eat more! You need your energy for the mountains!) I set off to Rijeka.

Thinking that the freeway would be a express shortcut to the 13km into the city centre, I gleefully jumped on, sprinting down the narrow shoulder of the road and racing through tunnels hoping no cars were behind me.

Only when the third tunnel turned out to be a kilometre and a half long and a highway patrol truck started to tail me flashing its lights while the trapped fumes stung my eyes and scalded my sinuses did I begin to fear for my life.

Cyclists, steer clear of freeways. And at all costs, avoid tunnels longer than 500m. My rear safety light was well hidden by my bags, so only the oncoming cars were warned by my front light while the vehicles behind me going 100km an hour had only their good eyesight and my blind luck. That’s a scary situation to end up in, believe me.

Rijeka was charming. Another waterfront city, the first thing I saw were flowers. An outdoor market spanning a network of streets began with a rainbow of flower stalls. Then came stalls of fruit, then vegetables, preserves and finally, olive oils and honey. I bought a punnet of strawberries and sat myself down to write and watch the city go past. 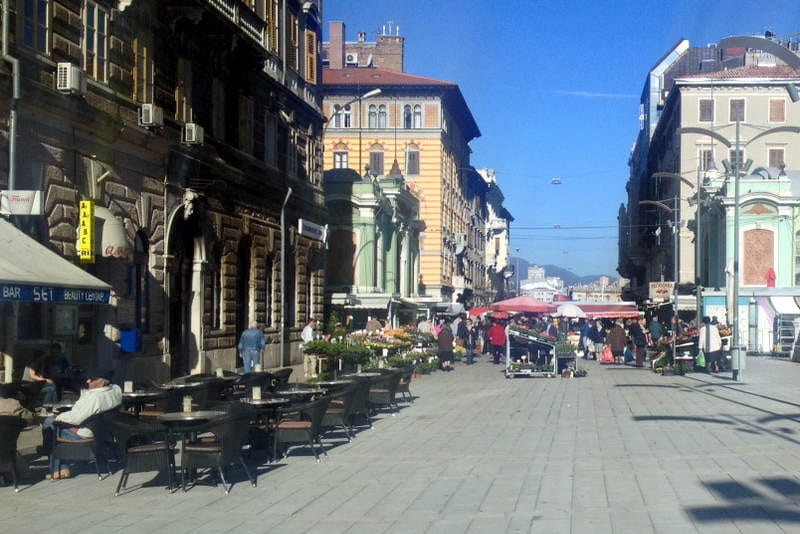 I think it’s Venetian, or Baroque, or both – the architecture with pastel colours, domes and ornate gilded trimmings – that dominates Rijeka. Impressive tall buildings and little streets with cafes and shops, people busy and people enjoying themselves, here at last was a place on the Croatian coast that lives and breathes a vibrant culture without relying on infusions of tourist blood.

Spring is in the air

After a little climb out of Rijeka I took the relatively direct inland road towards Trieste. I’d been itching to see Italy and had already seen so much Croatian coast and countryside, so taking a lengthy loop around the remaining Croatian coast didn’t appeal to me at that point.

This road only confirmed my preference. It’s mostly flat, almost free of traffic, and very pretty.

Spring is really starting to show now. My eyes were filled with the yellow, purple, pink and white petals of flowers, while my nose was filled with the scent of those and wood smoke, and my ears with the sound of birds and insects flitting about in the sun.

More than once lately I’ve ducked to avoid head-on collisions with butterflies. It’s like a cheesy Disney movie.

Next up is an example of why I love travelling alone and with only a very vague itinerary. About 8km from the Slovenian border I stopped at a roadside memorial to snack on some tuna and beetroot, when Zoran rolled past on his touring bicycle, panniers and all.

He slowed and asked where I was from, which lead to a conversation and exchange of details, along with an invite to stay at his place in the Slovenian town of Ilirska Bistrica, should I pass that way.

He’s a middle-aged dad who’s worked in hospitality and tourism all his life. A few years ago he decided to take a few months off work to enjoy life, and that worked out so well that he just kept on with it. He’s a warmshowers and couchsurfing host, has travelled widely, often on a bicycle, and has done the Camino de Santiago trail three times, on three different routes.

The trouble was, Zoran’s town was not on the road I was taking to Trieste, but on a road that forks North just before the Italian border. I had decided that morning to head towards Trieste.

There is a passage in Alice in Wonderland when Alice is asking the smoking caterpillar for directions. He asks Alice, where is she going? I don’t care, says Alice. And the caterpillar wisely responds, well then it doesn’t much matter which way you go.

Reaching Trieste wasn’t urgent or even necessary. I got a thoroughly good vibe off Zoran, so when I came to the fork in the road, I turned right. I committed to visiting Slovenia.

It's a small world

Arriving in Ilirska Bistrica, I pulled up at a bar where someone had parked a bicycle (always a sign of a friend), and pulled out my notebook with the details to ask for directions.

The tall young woman about my age who spoke the best English took the book and exclaimed that she was Sara, Zoran’s daughter! I sat down with her and her friends while she called her dad.

He arrived and after a coffee, showed me back to his lovely apartment and force-fed me excellent food until he was absolutely sure I couldn’t move. Carrot soup, bread, proscuitto and cheese, bean goulash and pasta, a Cornetto and a beer. Then we went for a walk through the town while he told me history and stories about it.

A spectacularly, vividly, almost fluorescent green moss covers boulders and rocks over which a series of waterfalls cascade into the little river Soca. The river runs through the town and in times past was used to power sawmills.

A series of houses over part of the river were the old mills, now just examples of interesting architecture. After the waterfalls we climbed a little hill to an old castle, all of which remains is one curved stone wall.

Everything around was covered in that brilliant green moss, grass and leaves and one of the fruit trees covered in white blossoms had patterned the green carpet with white polka dot petals. Slovenia is yet another place that hadn’t been on my radar at all, but landed unexpectedly on my bucket list after the event. 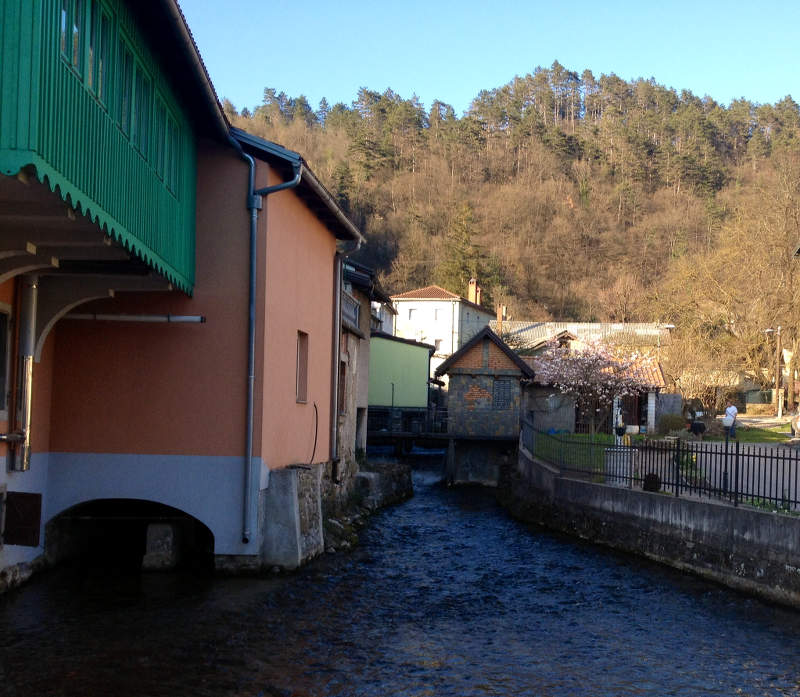 Every Thursday the new town library has some sort of event or presentation. This week was a book launch. Zoran and I went and it appeared that all the respectable members of the town were in their Sunday best to attend, but as it was all in Slovenian I spent the hour enjoying my daydreams.

This was followed by a wine at a local bar and engaging conversation, then an early night on a comfortable sofa bed. The universe is smiling on me, I can feel it.