Although I have lived in Athens for over a year, this was my first time bicycle touring in Greece! Leaving from Athens, I cycled to Corinth, Rio, and then to Messolonghi during my first week. This was the first section of my longer bike tour from Greece to England.

It has to be said, that Athens is not the most cycle-friendly city in the world. Working out how best to avoid the traffic as I cycled through was always going to be a challenge. Especially when a general strike which included ferry workers effectively blocked off my preferred route of using the island of Salamina to dodge some unpleasant sections of road.

Some re-routing was in order, and so I settled on one which took me north through Athens, and then westward through the suburbs. It actually worked out great, and so I have included the route map below in case anyone else bicycle touring in Greece needs to cycle out of Athens.

I would also strongly recommend cycling out of Athens on a Sunday as early as you can to avoid the traffic.

As far as cycling goes, this was a pretty easy day. It was for the most part flat or downhill, and the road was good quality, and sealed all the way.

Once I had cleared Athens, and the area with the oil refineries, the road more or less followed the coastline. Inspirational views always help the pedals turn that little bit easier!

My destination for the day, was Camping Glaros, which is just past Kinetta Beach. It has access to a little beach, so it only made sense that I went for a swim! If bicycle touring in Greece is always going to be this easy, this trip will be a breeze!

This was a really short and easy day of cycling. I was in no particular rush, and had planned a shorter day so that I could ‘ease' back into bicycle touring. It's just like riding a bike though, if you will forgive the pun!

All the old routines come back, such as packing the tent away, strapping the gear to the bike, filling up with water etc. I was pleased with how I immediately felt comfortable with it all again. I guess I really am in my environment when bicycle touring!

The route was mostly flat, and took me over the famous Corinth Canal. I have been here perhaps half a dozen times now, and the scale of it never fails to amaze me.

The desire to build a canal had been there for centuries, as it would act as a ‘short-cut' between the Gulf of Corinth and the Saronic Gulf. In fact, Ancient Corinth amassed its wealth and power by man-handling boats and goods over the sections which were not connected by a natural inlet. Completed in 1893, it is now used mainly by tourist ships due to size restrictions, and a one-way traffic system. 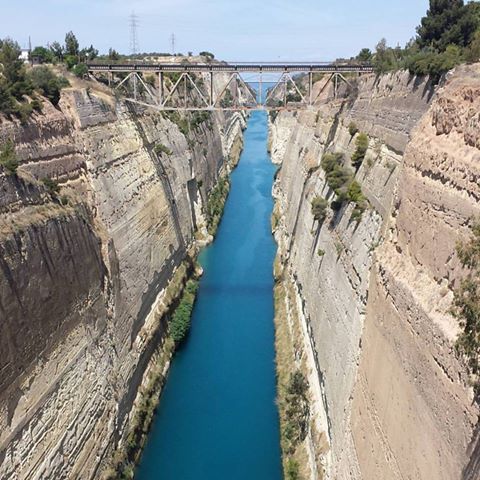 I finished the day at Blue Dolphin Camping, which was another place by the sea. All in all a great day, and so far, a perfect start to bicycle touring in Greece!

I've been really lucky with the weather on this tour. Although I figured that May would be a good month for bicycle touring in Greece, the weather can always be unpredictable.

So far though, clear blue skies, and warm but not insanely hot temperatures. It is also very early in the tourist season, and so there is an absence of large numbers of other tourists. This all combines to make for some great cycling!

Today's route took me from the Blue Dolphin campsite to Akrata Beach. For large parts of the journey, the road followed the coastline. A recent fast highway has taken much of the traffic away from the original route 8 highway, making it far more enjoyable!

Again, I was taking things at a leisurely pace – There is no need to rush something that can be enjoyed. (That applies to many things !). I found this wall collage along the way. A good sign I was on the right track! 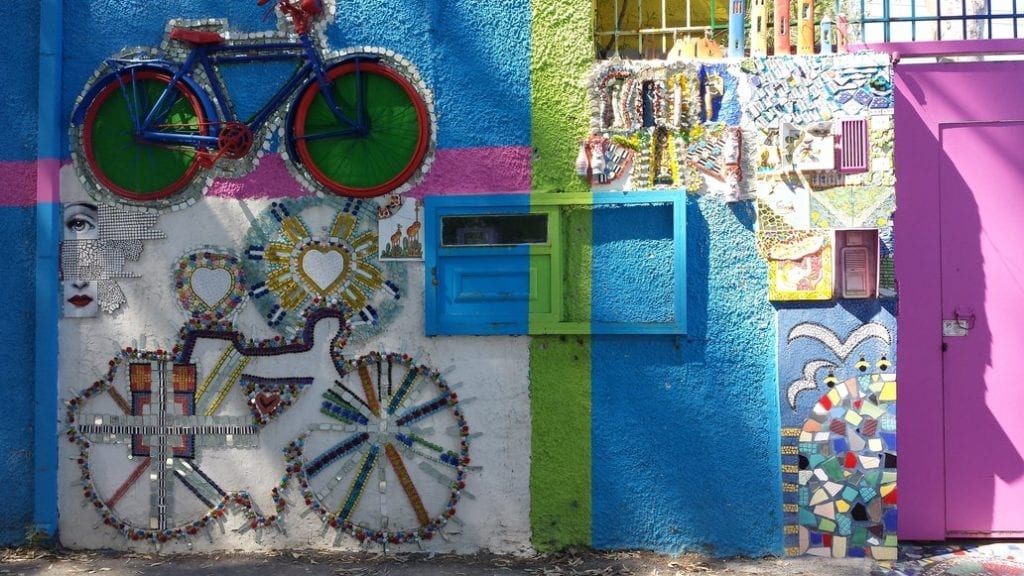 I eventually found Akrata beach camping, and set up. Although this is the best campground out of the three so far, the ground was solid. As my tent is not a free standing one, the pegs have to go in the ground in order for it to keep its shape. Luckily, there were plenty of rocks to use as a hammer!

At just short of 100kms, this was my longest day of bicycle touring in Greece so far. I think that the 100km mark is a psychological barrier of some sorts, although physically, I seem to be pretty capable of cycling this distance with all the added weight of my panniers, even at the ripe old age of 44!

The day was a bit of a mixed bag. There were some wonderful stretches of coastal road, but also a number of sections of roadworks and busy traffic as I neared Patras.

Stopping just before at Rio, I had to catch a ferry, as bicycles are not allowed on the bridge. Crossing with a bicycle from Rio to Antirrio on the ferry is free though. Sweet!

It also gave me a chance to see this marvel of design and engineering from a different angle as I took the boat across the water.

In this photo, you can see the bridge on the right, and my bicycle in the bottom left of ferry. Yes, it was an overcast day! 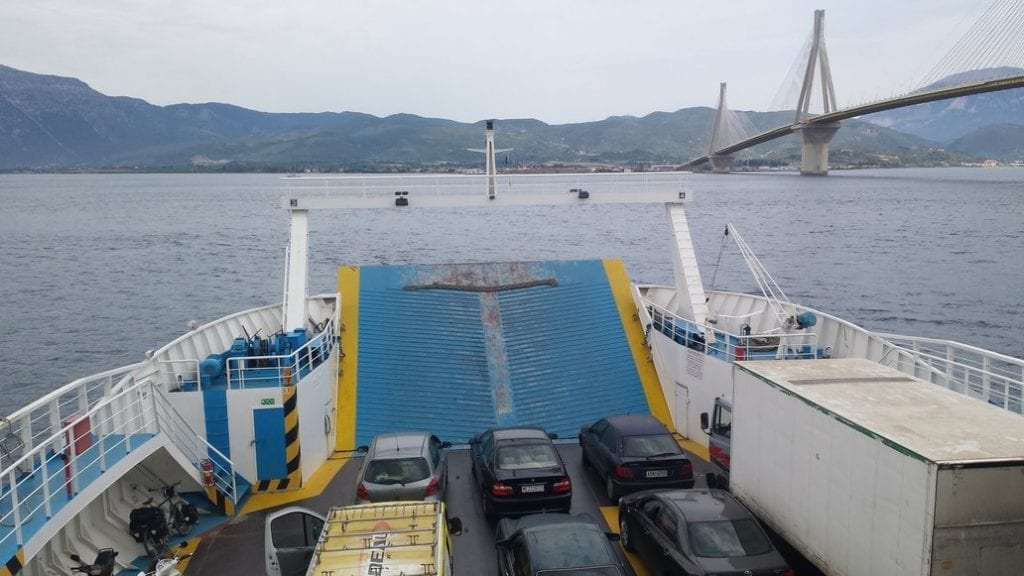 Once on the other side, I had 40kms to cycle to Messolonghi. Or Mesologi depending on how you want to spell it. I wish they would just settle for one version!

There were a few uphill sections during this stretch of road, but nothing I couldn't handle. I will need to get used to the hills soon in preparation for cycling in Albania!

Today, I took a day off from cycling. The reason being, that bad weather was quite literally forecast to follow my ride northwards out of Messolonghi! Am I a wimp? Possibly, but it might also be common sense.

I was due to take a day off from cycling a couple of days later in any case, so I might as well bring it forward, and dodge the rain and thunderstorms. Especially when the following days were all predicted to be fine again!

I spent most of the day online catching up with some work, with a couple of short breaks to wander around the bicycle friendly town of Messolonghi. 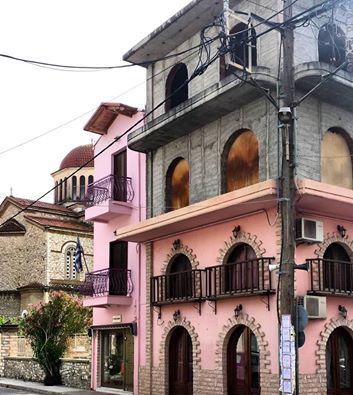 As it turned out, it was a good job that I took the day off. I later discovered that the campground I intended to head for had been closed down for five years. So not only would I have been wet, I also wouldn't have anywhere to stay!

Additionally, I had messed up some dates with a hotel in Parga I am due to stay at and review. Again, I had the chance to put this right also. So all things for a reason and all that. The only slight downside, is it means I now head out on Friday the 13th. Superstitious types cross your fingers and toes for me! 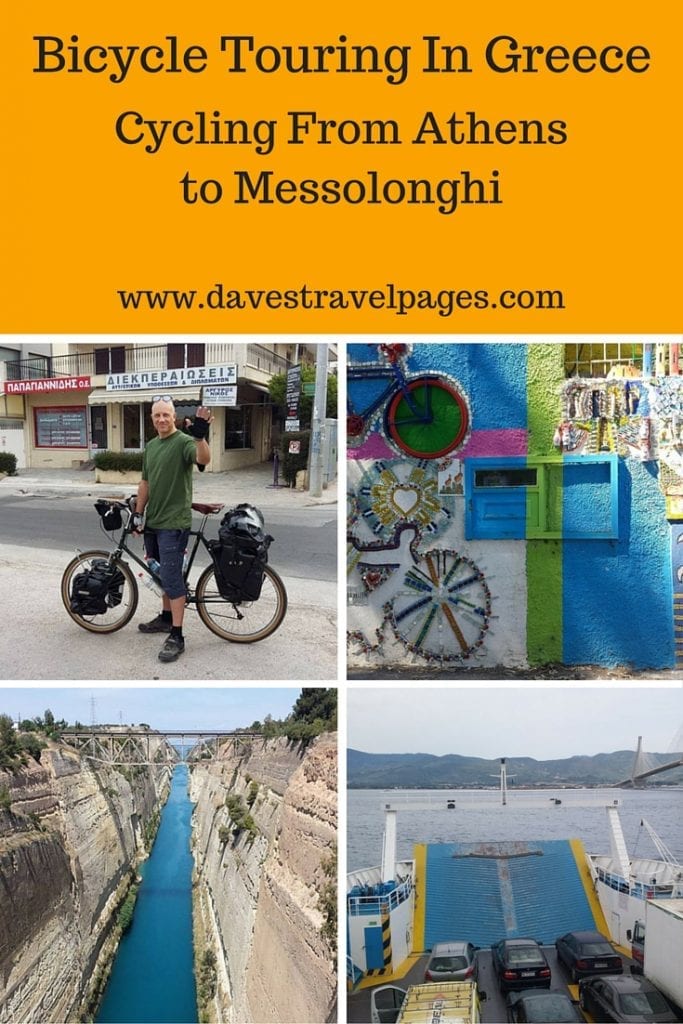 You might want to check out these bike touring guides