Last Updated On January 3, 2020 by Dave Briggs Leave a Comment

Cycling along the Eurovelo Route 8, Cat wrote regular blog posts of her experiences. This update covers some of her time spend cycling through Italy. 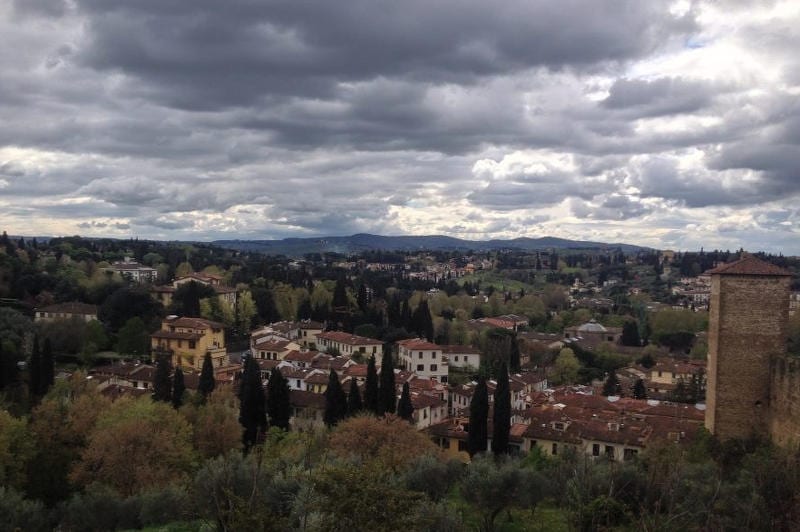 Where did I leave off? In the student house in Padova? I went out with a big group of Italian university students that night to an apertivo bar. It’s something I wish they did elsewhere, it’s wildly popular with students and anyone on a budget, a bar where for the price of a drink you get a buffet dinner, and the drinks aren’t expensive.

I’ve seen a number of them since in Bologna where they vary in the quality and quantity of the buffet. Some have a fair amount of fresh vegetables while others are simply pasta dishes and breads.

After a couple days in Padova, it was on to Bologna. Seven hours and 125km saw me arrive at my couchsurfing host’s place just a little late, with sore knees, hands and bum.

It was pretty much flat cycling. Italian roads so far are a dream, I actually didn’t change gears that entire day except to allow myself to stand and give my seat a rest.

I was kicking myself for setting up such a rushed cycle because the scenery was gorgeous and I barely got to see it. On the upside, my leg muscles seem to have accepted their fate and weren’t even tired after such a mammoth effort.

I adored Bologna. It’s another university city, in fact the university is one of the oldest in the world. It absolutely dances with life, has music everywhere, incredible old architecture and of course, the best food.

I gave some thought to what I really felt like doing, and as a result gave sight-seeing a break to go shopping instead. I’ve been travelling with essentially the same set of clothes since October, many of which were worn and had holes. And I was missing some key staples that would make me feel a lot more comfortable and stylish.

So I went op-shopping and had so much fun! Bologna has some great op-shops ranging from cheap markets with lots of rubbish to sort through to pricey vintage stores where they’ve already done the work of sourcing the highest quality and coolest items.

I went looking for the University because it’s one of the oldest in the world, and I love wandering around campuses. Most of it seemed to be contained in buildings that didn’t look inviting to strangers, but what I did find was the Museum of Evolution.

It’s free to enter and crammed full of creepy taxidermied animals from frogs and fish to giraffes and rhinoceros. There’s a library of stuffed birds, catalogued by geographical region, but most fascinating part was the displays of amphibious creatures in jars, wrinkled and silently swimming in yellow liquid. I’d imagine kids would love the museum too.

My couchsurfing host Massimo took me out to his favourite restaurant for dinner, and then to show me one of the local hidden treasures. I don’t know if I should even write about it in case it gets discovered by Lonely Planet and overrun by tourists, but it’s so cool I have to share it!

The place is called Osteria del Sole, near Piazza Maggiore. It’s a bring-your-own-food pub. Simply furnished with lots of long tables, garden space and people spilling out into the laneway, it’s basic but warm and I think it’s been there a very long time.

The walls are absolutely covered with art and photographs, the drinks are cheap and good, and there are people talking, laughing, and sharing all sorts of food.

I think it’d be the perfect place for a birthday party – bring your own dinner and a cake to share, and join in the crazy, relaxed, friendly vibe. Now if you do go, don’t tell Lonely Planet.

After Bologna I faced the mountain pass to Florence. Then following a late lunch of spaghetti, I pushed the bike for another few hours until I crossed into Tuscany.

I don’t think I can say much about Tuscany to add to what is already well-known, that it’s a soul-soothing region of rolling green hills and tranquil farms. And wind turbines!

Freewheeling down and back up little hills, I had the sound of music stuck in my head… the hills are alive, with the sound of turrrrrbines, with songs they have sung… etc.

Camping was easy enough too. I found a spot a little way off the road, sheltered from the wind by some trees and facing down onto the hills. As a bonus there were wild deer bounding around the woods behind my tent!

Each Italian city just gets better than the last, and Florence is the best yet! It helps that I’ve been staying with an awesome warmshowers host, Erdinc.

He’s a smiling bearded Turkish sculpture student who’s been spending each day with me cycling around the city or just chilling out when the weather or the vibe calls for it.

He hooked me up with pair of antlers for my handlebars to improve the comfort of long rides, just five euros at his friend’s bike shop. We installed them ourselves with a lot of laughter and blackened hands.

I cannot recommend warmshowers highly enough if you are thinking of travelling by bicycle, it’s a network of instant best friends.

We cycled all around Florence on my first day and Erdinc used his student card to score a free museum ticket for me to see one of the palaces of the Medici family in all of its opulence.

We bought bread, salad and beer and picnicked in the Garden Le Cascine, a huge park almost empty of people and filled with untended lawns. 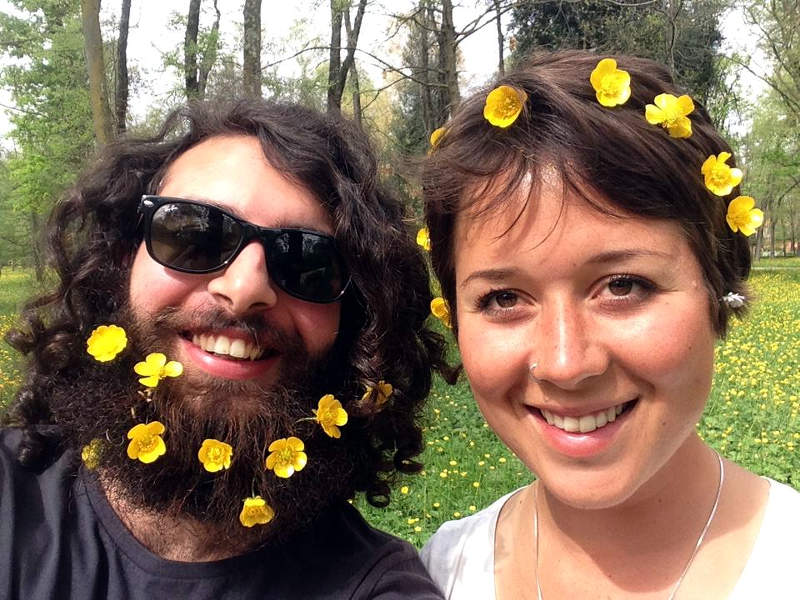 Because the grass hadn’t been cut the spring flowers were freely thriving, covering the ground with yellow and white. We put as many as we could in my hair and his beard, then rode around the rest of the day with our flowery heads while dour-faced Italians gave us disapproving looks and tourists smiled or laughed with us.

The next day it rained so we sat indoors and watched movies with wine and chips, then when it cleared we cycled east along the river for an hour or so until we reached a small village and explored an abandoned property where every gate, door and window was ajar and there was a doll’s head impaled on a fence post. It was the perfect setting for a horror film, or a cool place for a party.

One evening we cycled up the Hill of Michelangelo, climbed hedges into a lush garden full of flowers, called Giardino delle Rose, then watched the sunset from a set of stairs at the top of the hill to the sound of a guitarist street musician.

Another evening we went to a shop in the centre of town called “Larinfusa” where they refill bottles with excellent wine from a set of taps in the wall for just a few euros, so we filled a bottle, bought a pizza, and sat in a square to people-watch over dinner.

A couple of nights later we joined his friends at a protest/party in support of some of the beautiful graffiti in the city. It was a lively gathering of alternative culture and creativity, political activism, music and colourful performances, a circus girl on stilts, and free dinner by the local Food Not Bombs group.

I’d actually been looking for Food Not Bombs groups in Europe after hearing about the freegan and rescued food movements that focus on reducing waste and taking advantage of the incredible surplus of food and consumables available to anyone, should they take the initiative to look for it, so I was pretty stoked to just stumble across it here as part of the festivities. I feel that I’m getting to discover the secrets of the city and spending time enjoying it as if I were also a student here.

Florence is an amazing city to spend time in

I’ve also enjoyed seeing Florence from a tourist’s perspective. The renaissance architecture of the domed churches is different to what I’ve seen elsewhere, brightly coloured facades and dramatic sculptures in Ancient Greek style.

A lot of the city’s most impressive aspects were built by and for the Medici family who were so incredibly wealthy that they had an enclosed walkway built from their palace on one side of the city to another palace on the other side, to keep them away from the common pedestrian traffic.

The walkway crosses a bridge lined with shops where fishmongers used to trade, but the smell so offended the refined nostrils of the Medicis that they had the fishmongers evicted and replaced by jewellery makers, which remain there to this day, selling very expensive old-style gold pieces to rich tourists.

This week also marks one month of my bicycle tour. It feels like no time at all and I can easily see myself cycling for many more months, should my savings stretch that far.

With camping, warmshowers and couchsurfing, free entertainment and cheap food, I have been able to stick to an average cost of ten euros each day.

Bicycle touring can be expensive if you get all the fancy gear and give in to eating good hot meals at restaurants after long rides, but if you’re prepared to make do with basic equipment and simple food, it can be very, very cheap!