Last updated on March 17, 2019 By Dave Briggs Leave a Comment

The second day of cycling in the USA after leaving Canada. Today, I cycled the route between Bogachiel and Kalaloch. A relatively easy day.

Biking out of Bogachiel

Another uneventful days cycling. Perhaps I am being lulled into a false sense of security? To be honest, a few quiet days with no major issues or bad weather would be great!

The surrounding forests are very nice, with some interesting trees and ferns, but really, there has been no great views to speak of, other than glimpses of the ocean.

The smell of salt and the sound of waves is always relaxing to me, and perhaps that’s why I did another short day of only 30 miles. I stopped at Kalaloch which is set in a national park, and stayed the night at Kalaloch Campground.

The Beach at Kalaloch

I went for a walk along the beach, and there were huge amounts of trees washed up on the shoreline, bleached white by the sun. It was quite relaxing, and a nice end to the day's cycling – even if it was a short day's ride in the end! 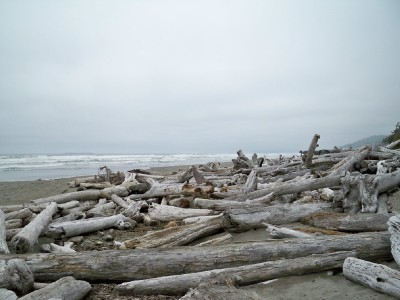 Tomorrow, is another short day, but after that I need to up the mileage, as although I have been tremendously lucky with the weather so far, it is officially fall here now. (Fall is the US autumn. I guess called so because the leaves fall down?? Who knows.). This means that the weather will be due to get rainy at some point,. Getting a bit further south for October would certainly be advisable! As soon as I get to California, the weather should stabilise a little.