Last Updated On March 12, 2021 by Dave Briggs Leave a Comment

Whilst the day's cycling from Kalaloch to Quinault was fine, I had issues with my tent when setting it up when a pole snapped. The joys of bike touring!

(Blog post written: Sep 24 2009) – Continuing my cycle ride along the west coast of the USA as part of my bike tour from Alaska to Argentina.

I got away without paying for the nights camping – Thank you very much wallet-guardian-angel! Perhaps karma came back to bite me on the ass later though.

Today's ride would see me cycle from Kalaloch to Quinault, a distance of about 33 miles on the Pacific Coast Highway 101, although it didn't follow the coast for much of the distance!

A couple of steepish climbs today, but nothing too challenging, and in fact, until the memory of the mountain climbs from Lillooet has faded, I doubt much will seem like hard work for a while!

At a store just outside of Quinault, I bought some strange deep fried thing that had melted cheese in it.

I called it a day at Willaby campground just outside the settlement of Quinault, and overlooking the lake. As I was putting the tent up, another pole snapped on the opposite side of the one that went before. Joy of joys!

Actually, there was a little bit more swearing involved than that, and I managed to string thirty two obscenities together before I ran out of breath.

To say that I have found this Vaude tent a disappointment is a massive understatement, and I will never buy one again.

So, on to repairing the tent – Fortunately I had found a length of steel alloy tubing on the side of the road some weeks before (as you do) which was just the right diameter to make a bridging piece.

Cutting it with a Swiss Army knife was no small challenge however, and the tent got called a few more names.

I managed to get it to the right length, and the tent got up, but I am pretty resigned to the fact that it will fail me again at some point in the very near future, and I will have to replace it with something else. 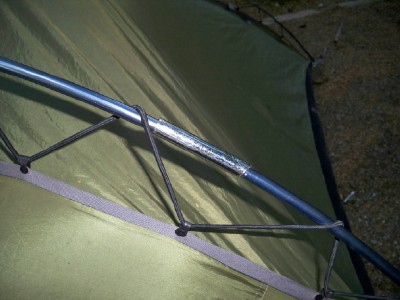 After that was all dealt with, I cycled down into Quinault to have a coffee and use the internet to check on a few emails I was expecting.

With a bag of skittles in hand, I went back to the camp, where I saw my first snake of the trip, but was too slow fumbling around with the camera to capture it on film.

I did manage to take a picture of a spiders web though!! 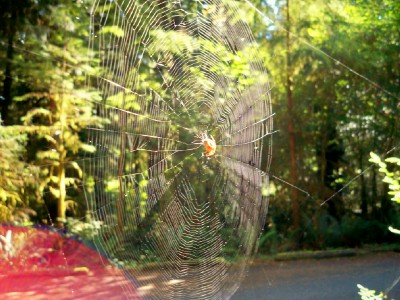 Use the links below to read more updates from this cycle trip:

– Dave Briggs
Dave wrote this travel guide about traveling from Kalaloch to Lake Quinault while west coast highway cycling when bicycle touring from Alaska to Argentina.