Last Updated On July 23, 2021 by Dave Briggs Leave a Comment

My backpacking Bolivia travel blog. During my backpacking adventure in South America, I experienced many interesting places to visit in Bolivia. Here's my blog. 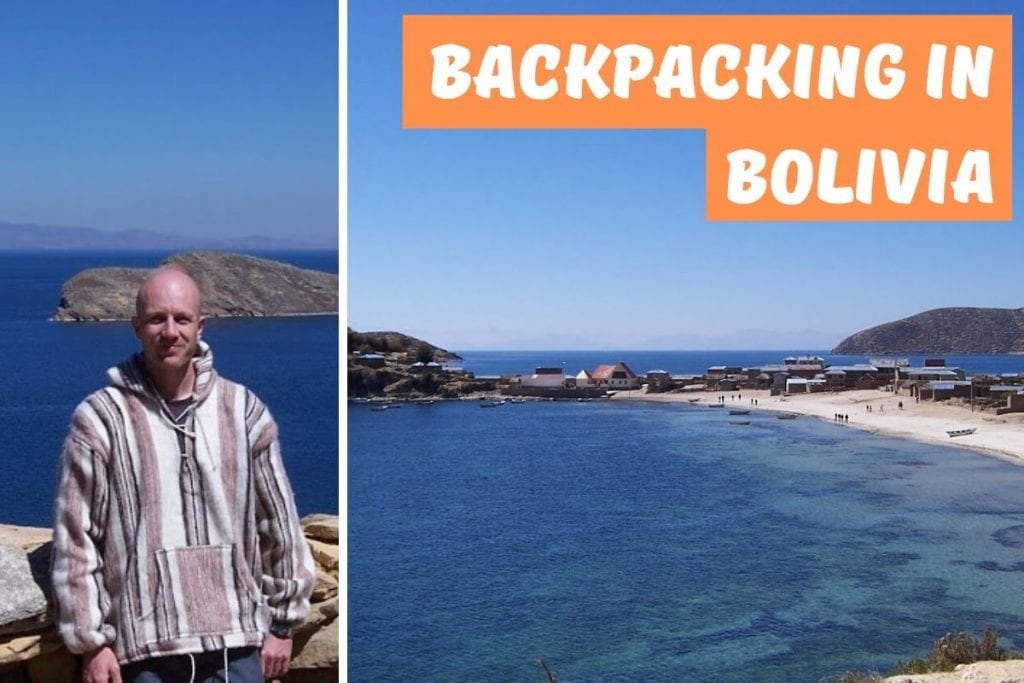 Where to go in Bolivia

After spending a week in Easter Island, it was time to head back to the South American mainland to resume my backpacking trip. 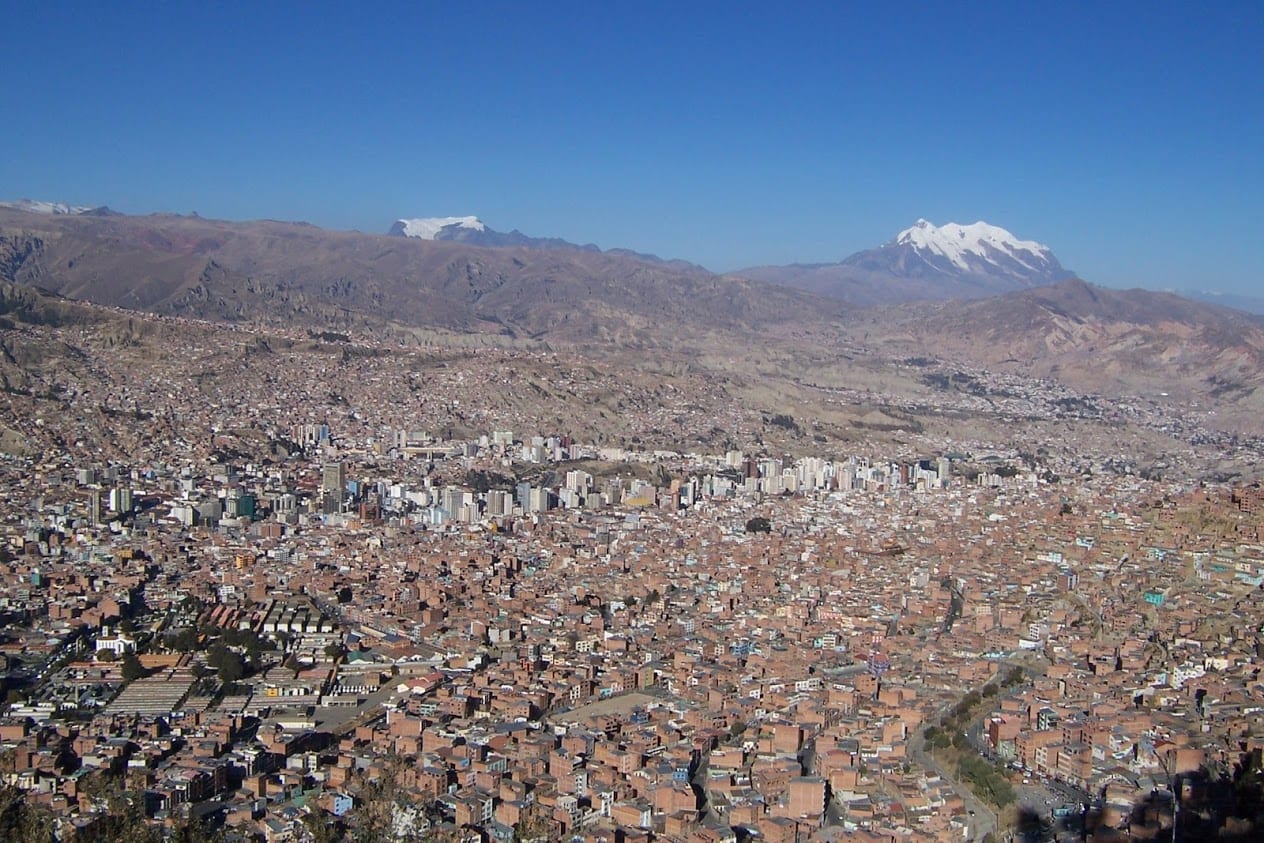 Wednesday 10th of August, and I land in Bolivia, breeze through customs, change a bit of money, and arrange a lift into the city.

At 3630m above sea level, La Paz is the highest capital city in the world, and the snow capped mountains which surround it were stunning scenery on the way in. 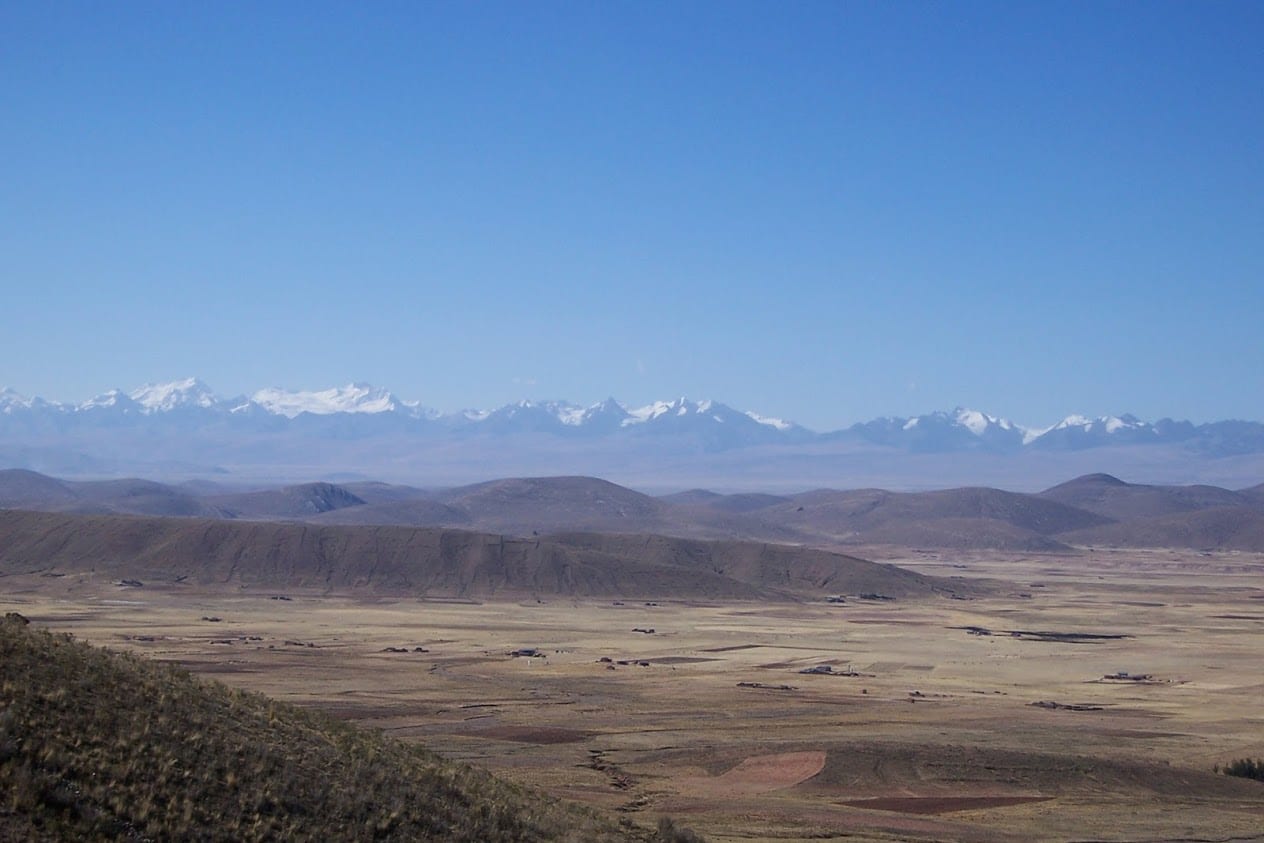 The altitude hasn't been a problem for me so far (writing this a week in), but there was oxygen at the airport if anybody needed it. I booked into Hotel Condeza which at $8 a night is ok, although the room was a bit chilly.

The plan was to spend a week chilling out, getting used to the altitude, and organising onward transport and travel plans.

During my time there, I booked a day tour to Tiahuanaco, and also transferred what is now positively the last money I can from one account to another. This brings my daily average spending money back up to the whopping $20 mark.

Wednesday was the day trip to Tiahuanaco, and although it was a long day and I was setting new records for sitting on the toilet (again!) before setting off, it was worth it in the end.

We were only a small group of another solo English guy, an English couple, a French family and an Israeli couple, who for whatever reason, caused some friction between themselves and the guide.

I'd heard along the grapevine that the Israelis can be overly argumentative and arrogant at times, but I'd never witnessed it until now.

It was quite bizarre really, almost as if they were deliberately provoking the guide, but then when he stood his ground and snapped back, they seemed to respect him for it and stopped. Different cultures behave differently I guess.

We arrived at the archaeological site of Tiahuanaco, and the English guy from the couple was clearly suffering from altitude sickness, and looked a right state. If I ever look that ghostly white, I'd like shooting please! 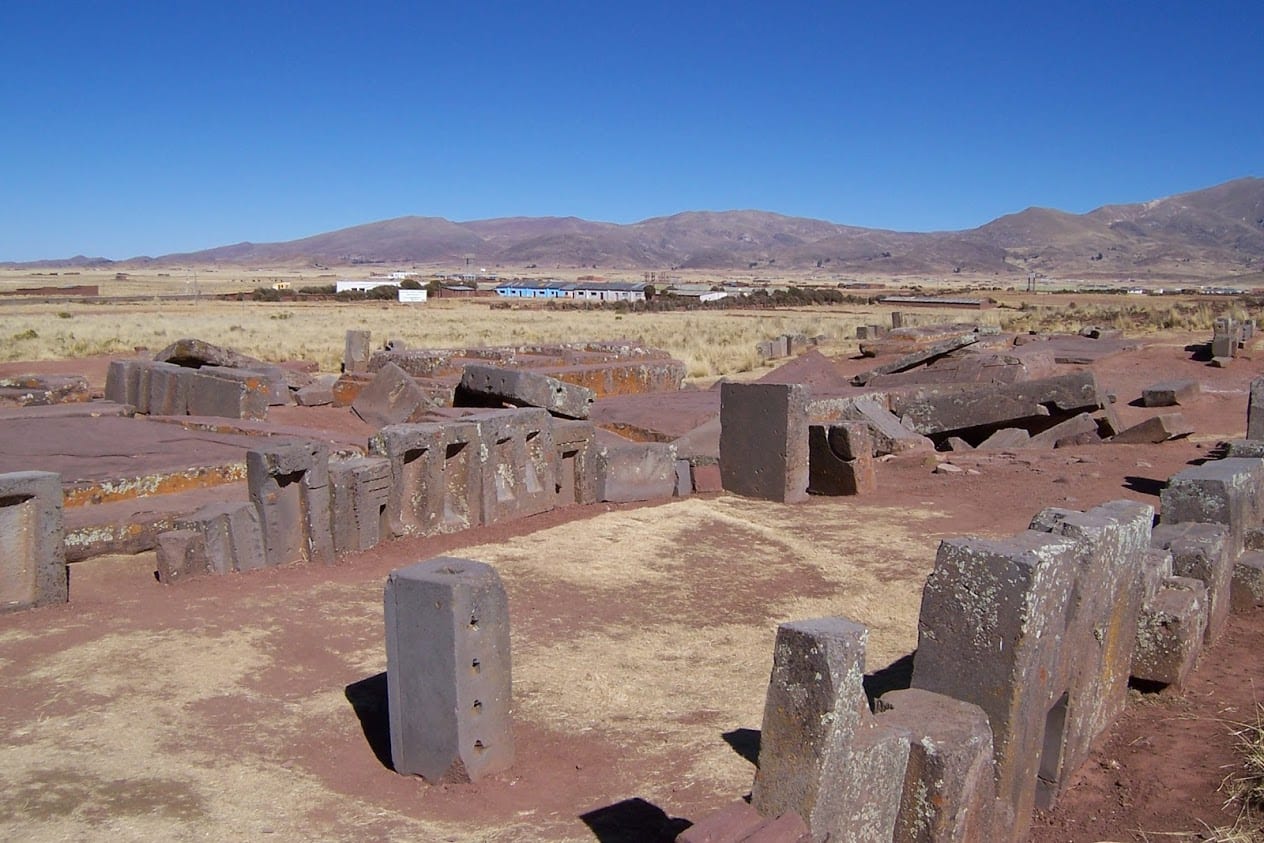 Tiahuanaco itself was not that spectacular, but there were a couple of interesting points to make the trip worthwhile.

Two or three weeks previously, the archaeologists had uncovered thirteen skeletons very close to the main temple, which was an unusual find, and they were still working at removing the dirt from around them as we were there.

I only hope that they can find some way to erect a protective casing around them and leave them where they are, but I fear that they are destined to end up in a box in some dusty museums storage area. 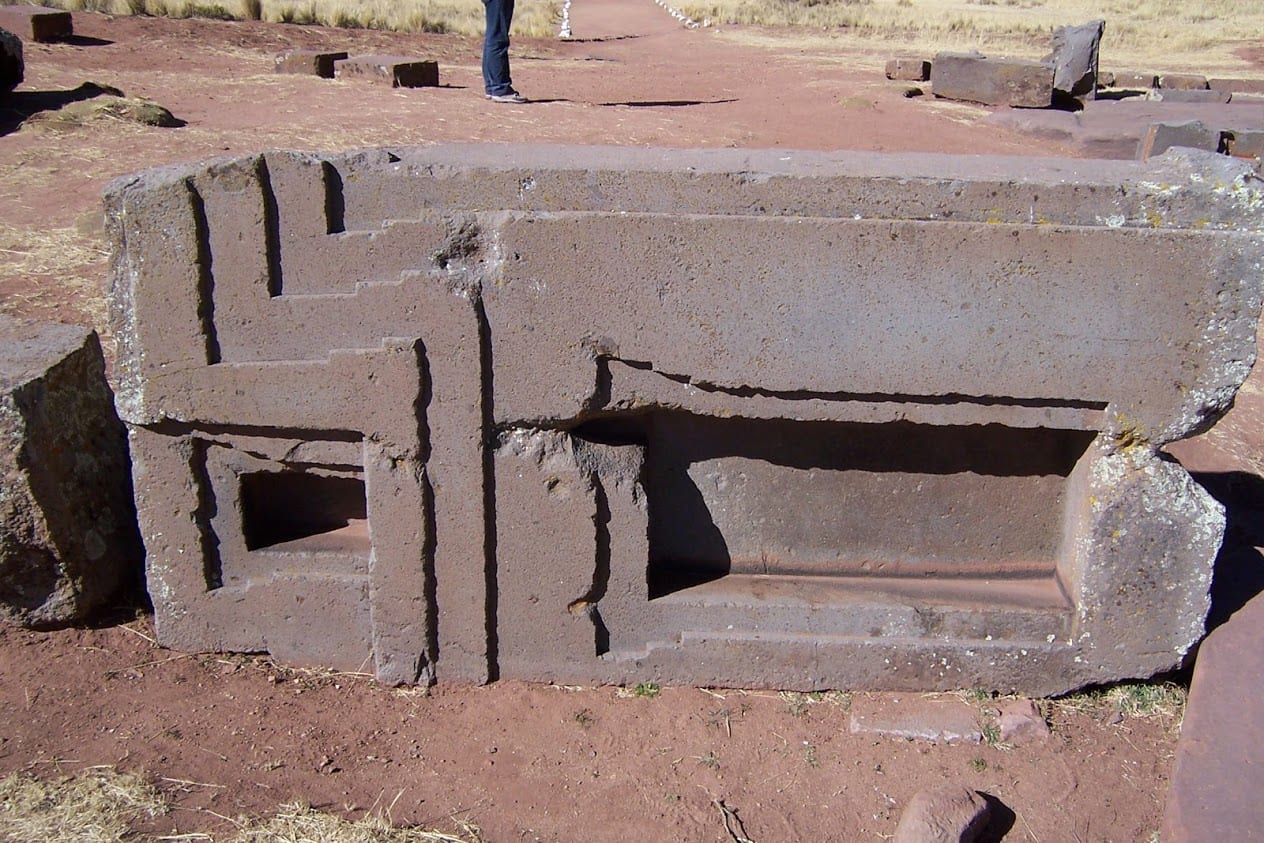 The area known as Puma Punku was the highlight for me though.

Some of the stone slabs, transported from over 80 kms away, were colossal at over 100 tonnes, and the stone blocks which were left scattered around were so perfectly finished, that they looked as if they could have been made in a mould, or cut using an angle grinder. 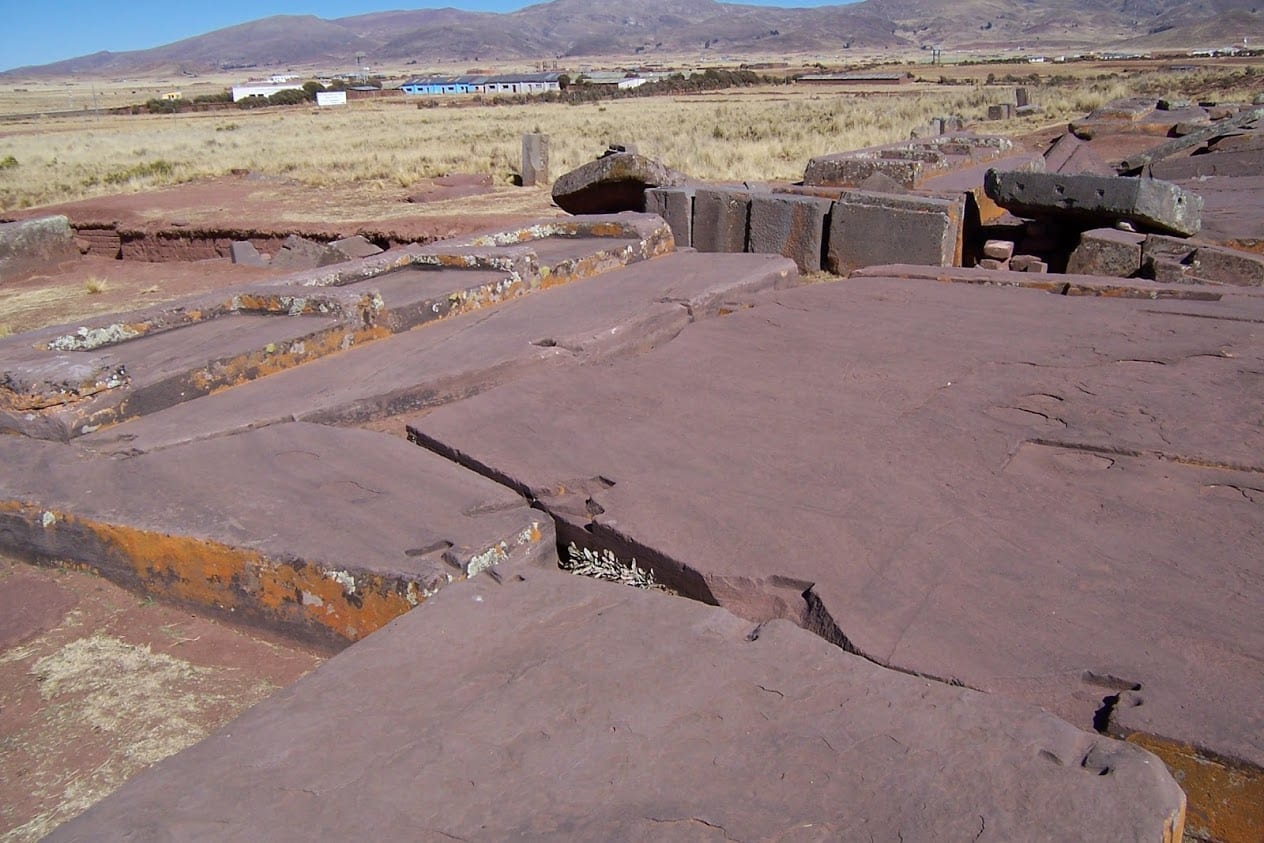 The quality of them, from over two thousand years ago, is the most unique thing that I have seen so far, and the more I looked at this section, the more mysterious it appeared. You can easily see where Von Danekin gets his spaceman theories from!

Shopping in the Witches Market in La Paz

Sunday the 14th, and I went on a bit of a shopping frenzy in the area of La Paz known as the Witches Market, whose name comes from some some of the stalls which have large amounts of dead, mummified things on them. Quite weird.

Much as I would have liked to have taken home a freeze dried Llama foetus, I stuck to buying regular gifts for everybody, and for myself, an excellent Alpaca top which at £6.50 was just too stupidly cheap not to buy. 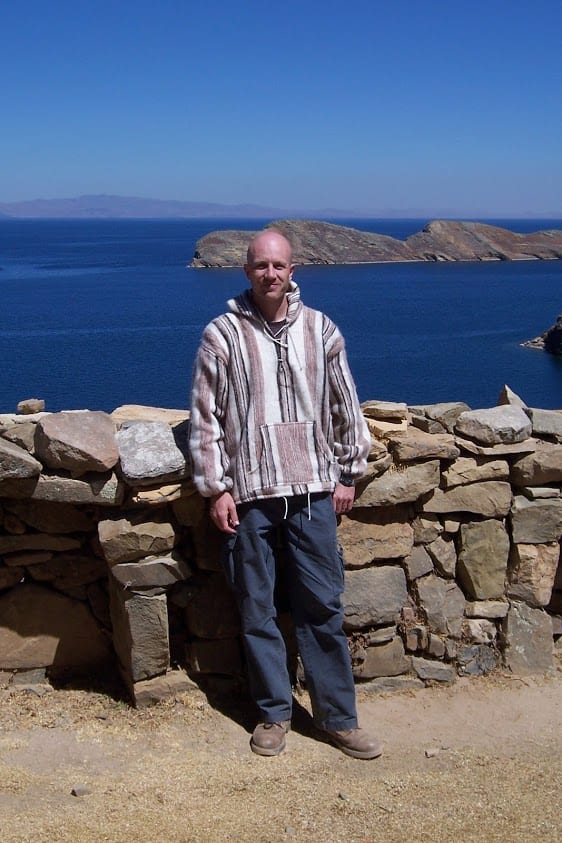 When I got back to the hotel, I noticed that the cleaners had thrown away the plastic bag I use to put my wash bag in, which was a bit upsetting.

I know that you shouldn't get attached to a plastic carrier bag, but it was from the Kumar centre in Thailand, and I was expecting it to last longer than the T-shirt that came in it. I must have spent over half a year seeing that bag whilst travelling, and now it's gone. R.I.P. old friend.

The El Griego bag from Quito is not quite the same, but we are in the early stages of our relationship, so I just hope it works out!

The bus ride to Copacabana the next day passed through some stunning scenery, and I must say, that Lake Titicaca has one of the most spectacular settings I've ever seen.

Life must be harsh for the people that live in this area, but as a tourist, it's beautiful. 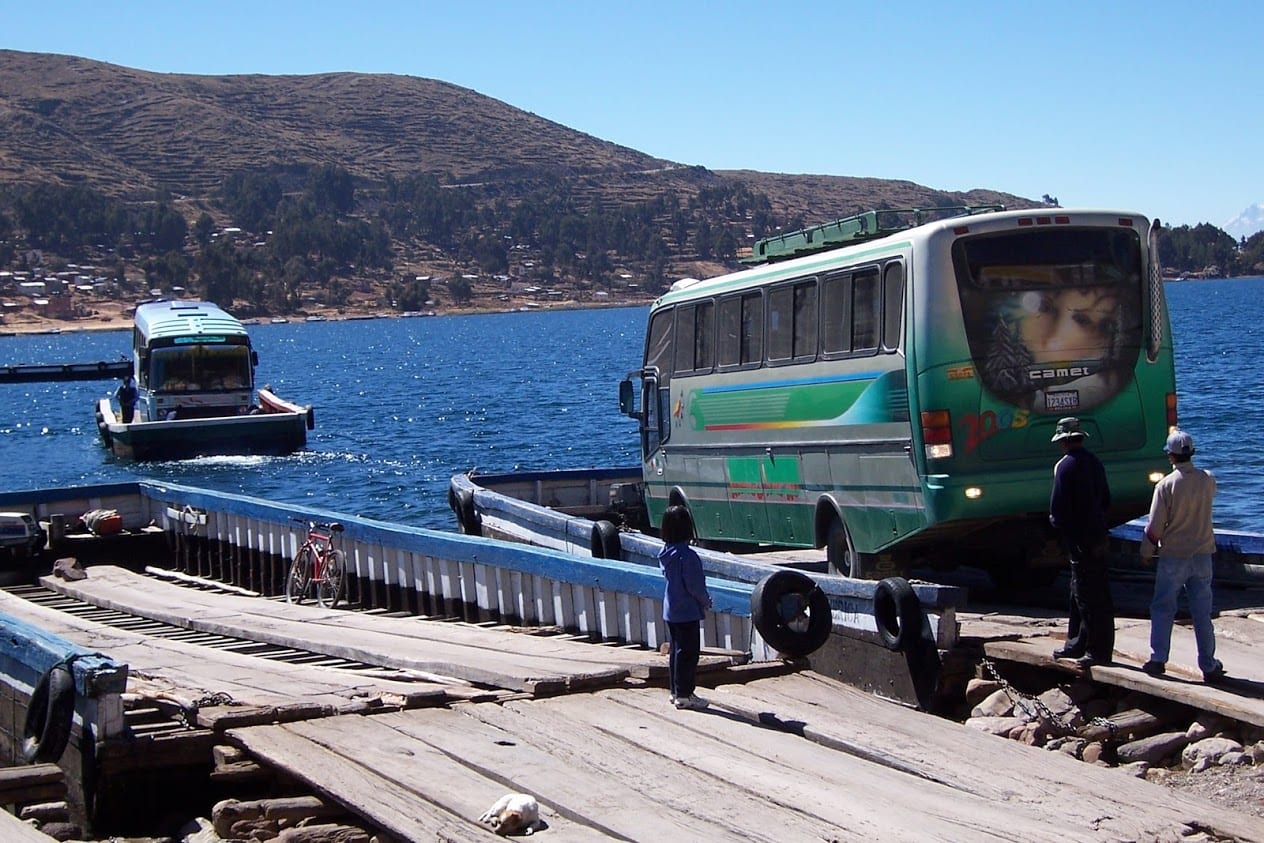 There was a short ferry ride over which broke up the journey, where the passengers boarded a motor boat, and the bus went over on a separate launch. Don't think I would have wanted to be on the bus launch as the photo's show! 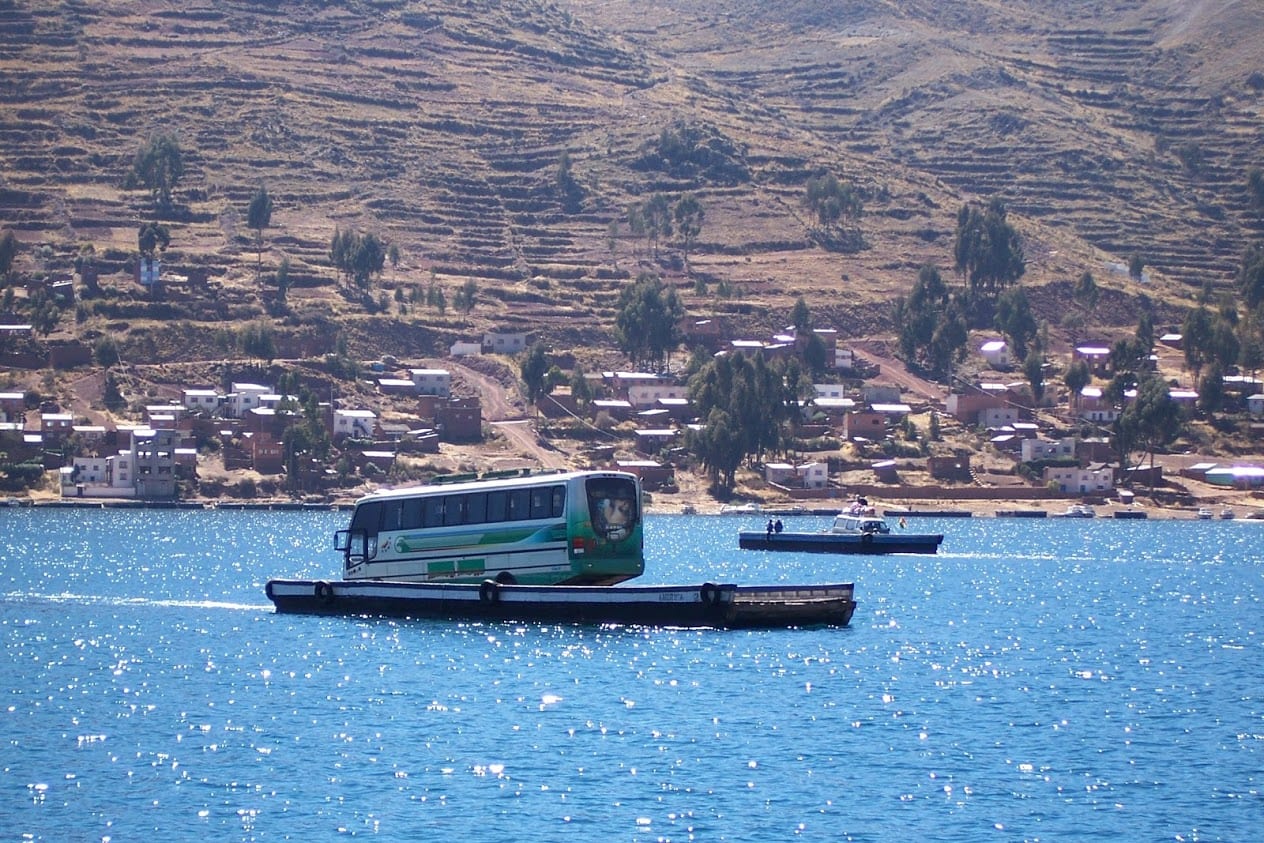 Got dropped off at Copacabana, where I booked into Hotel Center, which at only 20 Bolivianos a night, must be the cheapest place I have stayed so far.

8 Bolivianos is currently one dollar, which means that in pounds the room is, er, um, my head hurts… It's cheap anyway.

There seems to be nothing but western tourists here, so I'm firmly on the gringo trail now.

As I've travelled, I've noticed how each year and in each country certain keywords are used by backpackers, and here, it's ‘hardcore'. As in, ‘Wow, that sounds really hardcore!'.  Right-o.

On Tuesday, I got up early and had breakfast before catching a ferry over to the Isla del Sol. I sat up on the top deck, where I was quite glad of my newly purchased, if slightly hippy looking, alpaca top, as it was a bit chilly at that time.

The views on the way over were spectacular, and although some people were calling it ‘hardcore', I prefered the 2001 phrase of ‘sweet as', or even the 1998 ‘mega'. 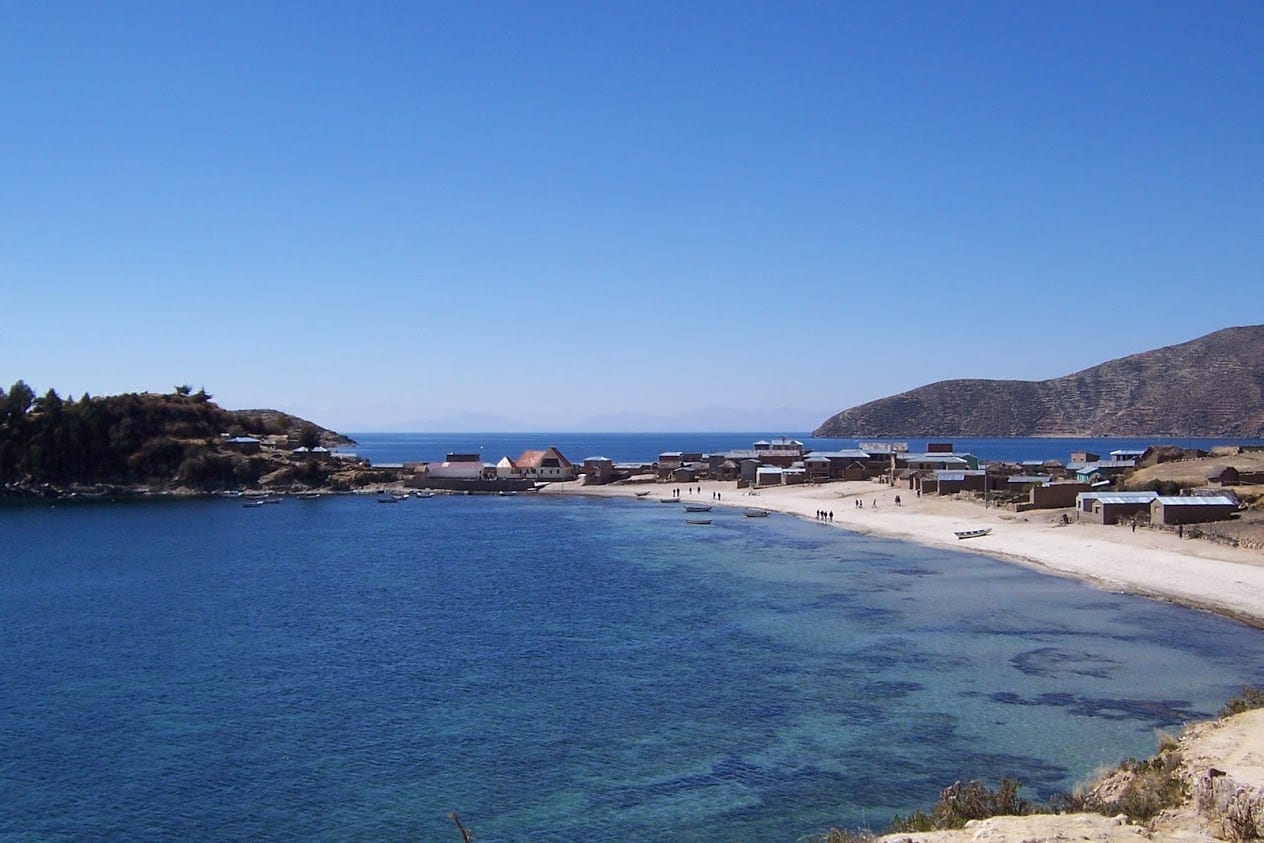 We were dropped off at the north end of the island, with the intention of walking to the southern port.

Everybody milled about aimlessly on the beach waiting for someone to head off first, so I thought it might as well be me, and as I walked to the gold museum, I looked behind, and sure enough, people had started to follow… Bahhh!!

The gold museum was interestingly named, as it had no gold, and was more like a garden shed than a museum. After 30 seconds, I had seen the exhibits, and made my way along the track to the first of the ruins. 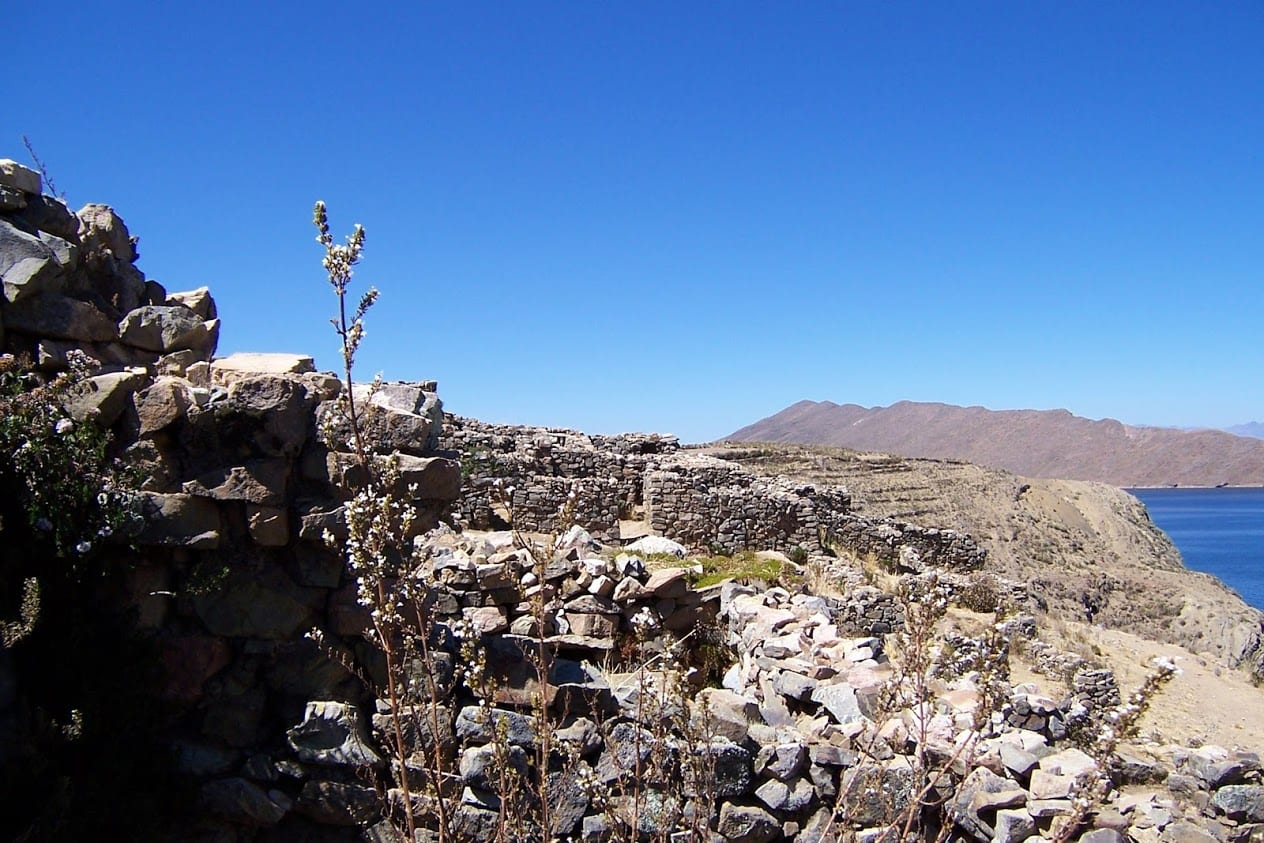 It was about an hours walk away, and although the hills weren't too steep, you had to remember that we were still over 3000 metres up, but my lungs soon got used to it. 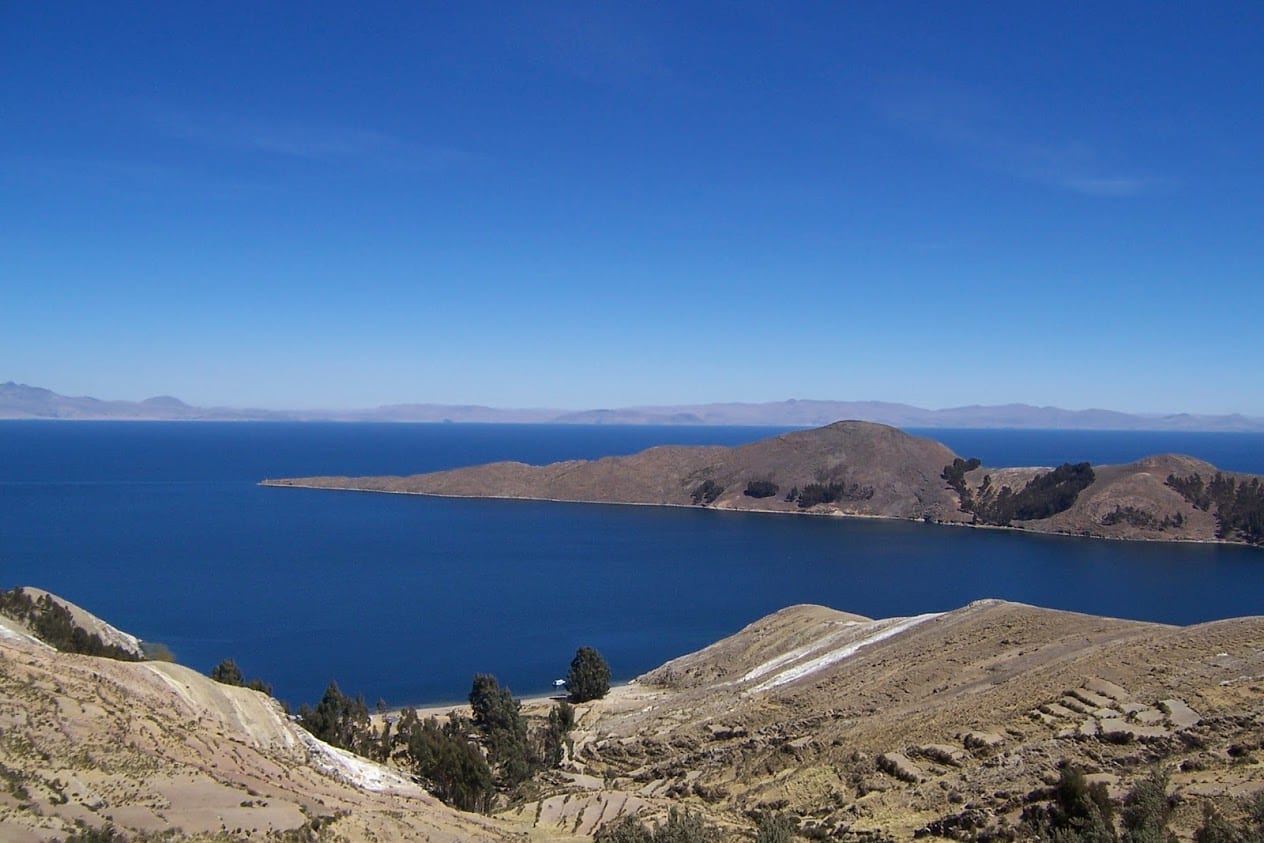 The Labrynth, as the ruins were called, were, to be honest, rubbish, but their location was stunning, so I thought it would be a good place to have a spot of lunch.

Peace and tranquility were not to be mine, however, as true to attracting odd people form, it didn't take long for one of their number to track me down.

This particular example, came in the guise of an elderly English lady, who after accosting me, started talking about rocks soaking up the cosmic rays of love, and how mankind is gradually waking up to what the ancients knew; mainly that the universe radiates love and energy.

She continued that this area had always received and given out power, and that's why it was a holy place to the Incas.

Now, I've read a lot about these sorts of subjects, and am quite open minded to it all, but it's a little hard to take it seriously when you've got a mouth full of cheese sandwich.

Besides which, the only thing I knew for sure, was that she'd been soaking up a lot of gin, and so I bade her farewell, and went on my way south.

The views were awesome (2000) as I walked up and down the hills, with the lake on both sides, and snow capped mountains in the distance.

The trek itself was really enjoyable, and I relished the physical challenge. In two hours, I'd made it to the other port (soundly beating the Germans, and thrashing the Americans), where I waited for the boat back to Copacabana.

Some of the people on the original boat had decided against the walk across the island, and they pulled up on another ferry. 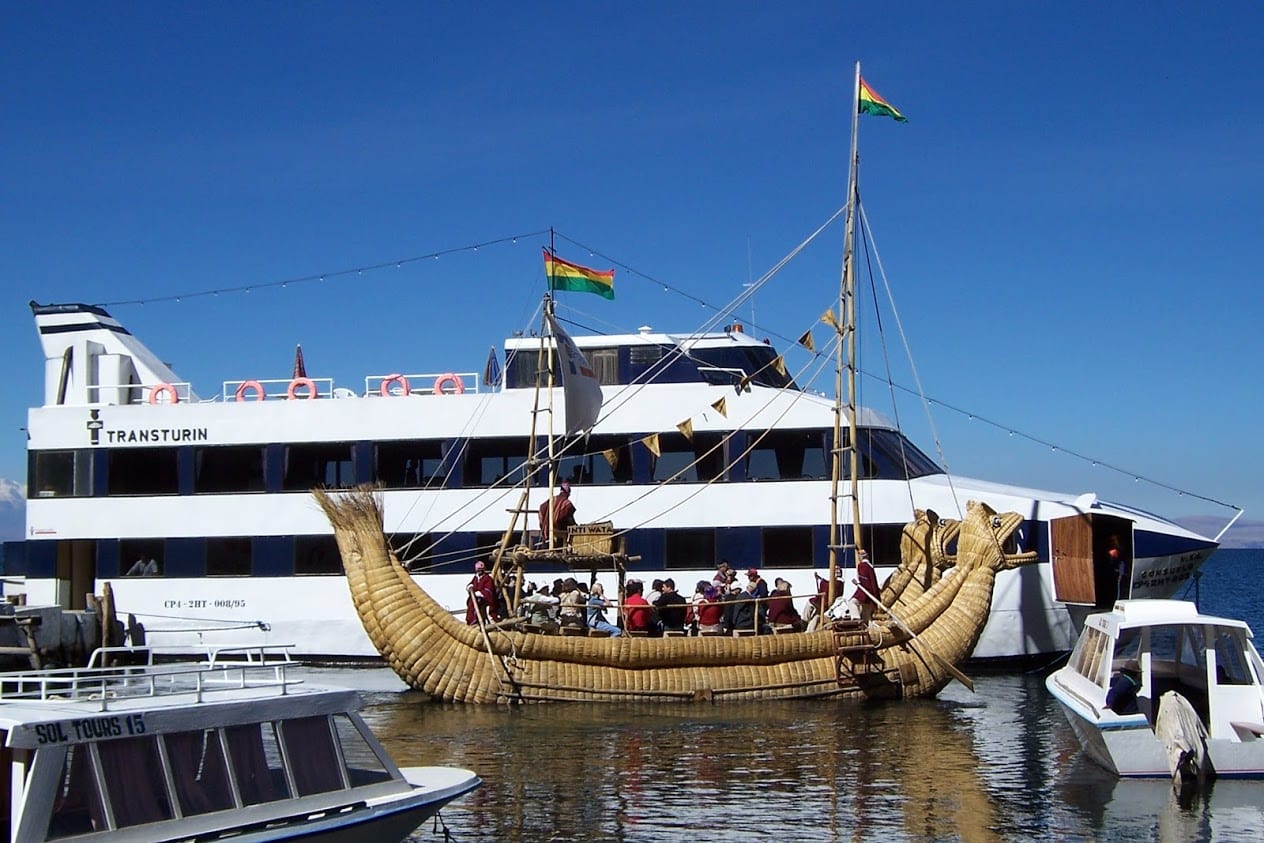 The old-age, new-age lady was amongst them, and although I wanted to be sarcastic and say I thought she would have had enough energy for the walk, what with the cosmic rays and all, I decided against being drawn into another conversation with her.

Besides which, I was enjoying laying on the grass, the sun shining down on my… wait a minute. Maybe I was soaking up some cosmic energy. Hardcore, man.

Anyway, got on the ferry, off it again 2 hours later in Copacabana, and walked into a restaurant where I ordered the biggest pizza the world had to offer, and a litre of coke. Well deserved, I thought!

Travel from Bolivia to Peru

Had a bit of a lay in the next day, and after breakfast, bought some more souvenirs, and swapped a book. The bus for Puno, Peru left at one thirty, and the border crossing was one of the smoothest I've been through.

On the Peruvian side, typically, a delay kicked in when the bus suffered a puncture. Many of the tourists on board had clearly never witnessed anything so exotic as a flat tyre before, so they took as many photos as they could, which I'm sure made the labouring driver the happiest man alive.

Twenty minutes saw us on our way again, and we soon arrived in Puno, where I booked into a hotel for a couple of nights, and booked two trips. The story continues with my travel blog in Peru. 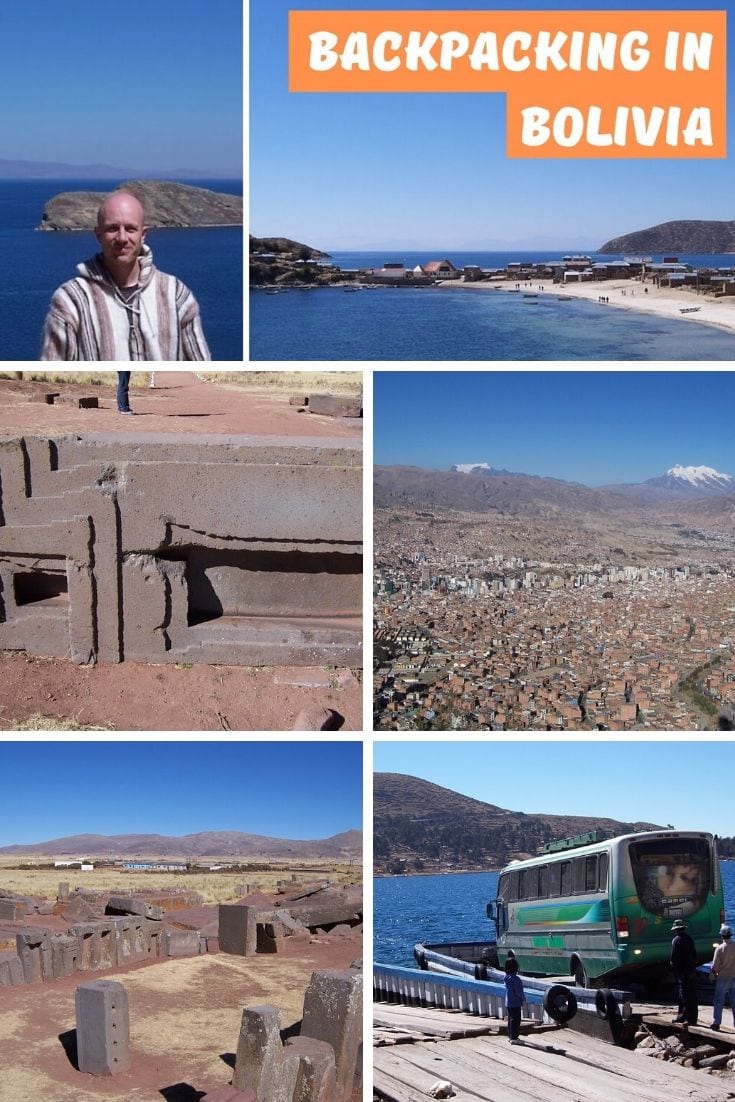