On this day of my bike tour through Peru, I cycled from Huamachuco to Shorey. A challenging day given the terrain and conditions, but all part of the fun! 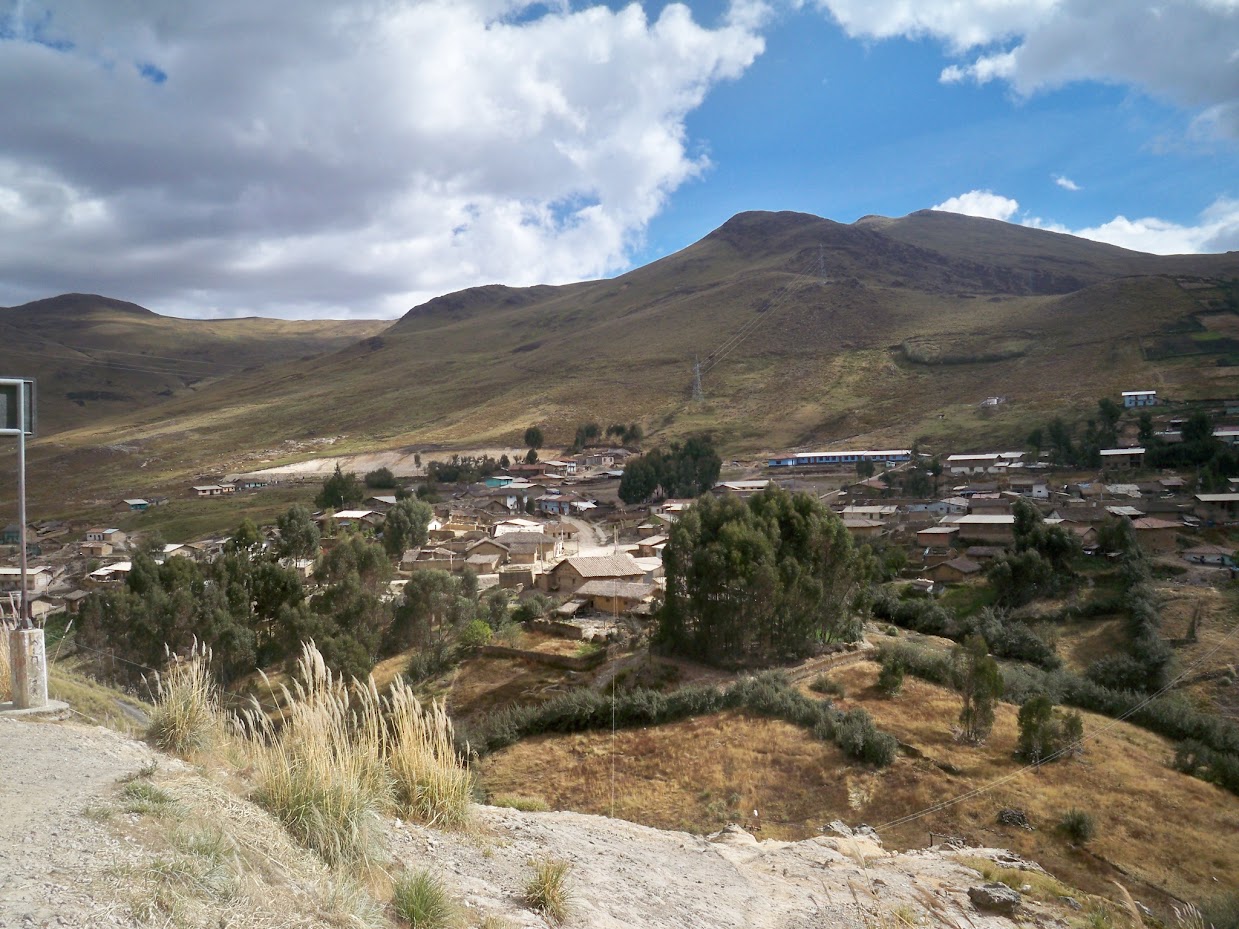 The road that didn't exist

Today was a bit of a mixed bag. It started off ok, when I left Huamachuco at 07.30, loaded up with 4 days food for the road ahead. A bit of an initial steep climb out of town, but things soon settled down, and wonderfully, there was a paved road.

Down to Yamobamba, and that’s where I had problems. It was at this small village I was supposed to turn left, and head up into the mountains on my short cut to Huaraz.

The only problem, was that of the dozen people I asked, no one knew about the road. There were a few random tracks leading off to the left, but the appeal of cycling for miles along a track with no firm idea of where it went, and the possibility it could dead end at anytime, was lost on me.

The general consensus of the people I asked directions from, was that I should carry on along the sealed main road to a settlement  called Shorey, where there might, repeat might, be a way through to Huaraz from there. Great. A days planning down the drain. 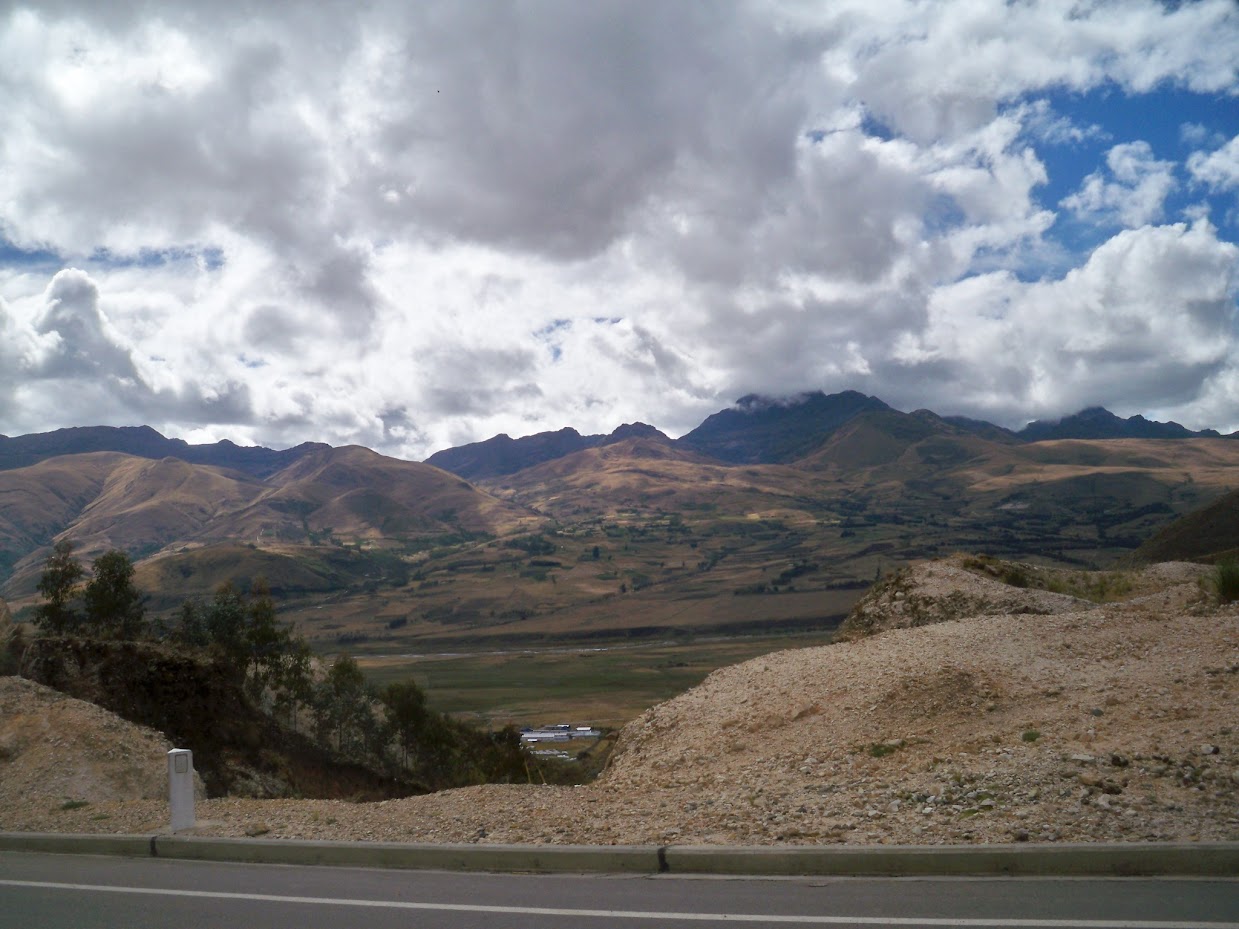 Cycling at 4000 metres height in Peru

Still, as I looked over on my left, and saw the huge dark clouds sitting on top of the mountains, I couldn’t help but think that maybe it was a sign. Certainly cycling on a sealed road is tonnes easier than cycling up a mud track in the rain!

So, it was on with the headphones for cycling, Slipknot selected, and away I went.

It was a long climb, up to the 4000 metre mark, where the road deteriorated into a gravel track, and I cycled along a rolling plateau that in one place touched up to 4200 metres. 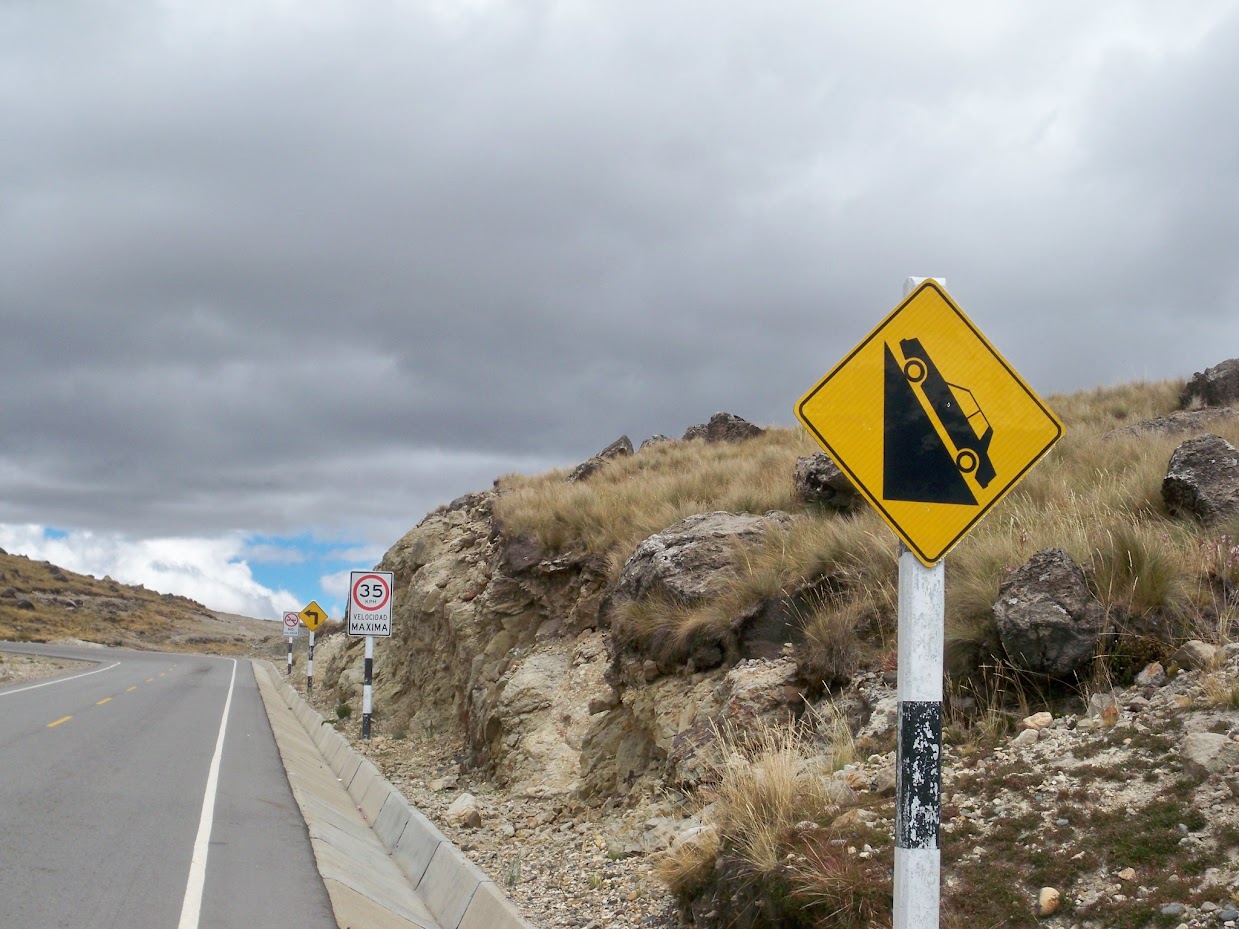 Approaching the 4000 metre mark, this isn’t really the sign you want to see. 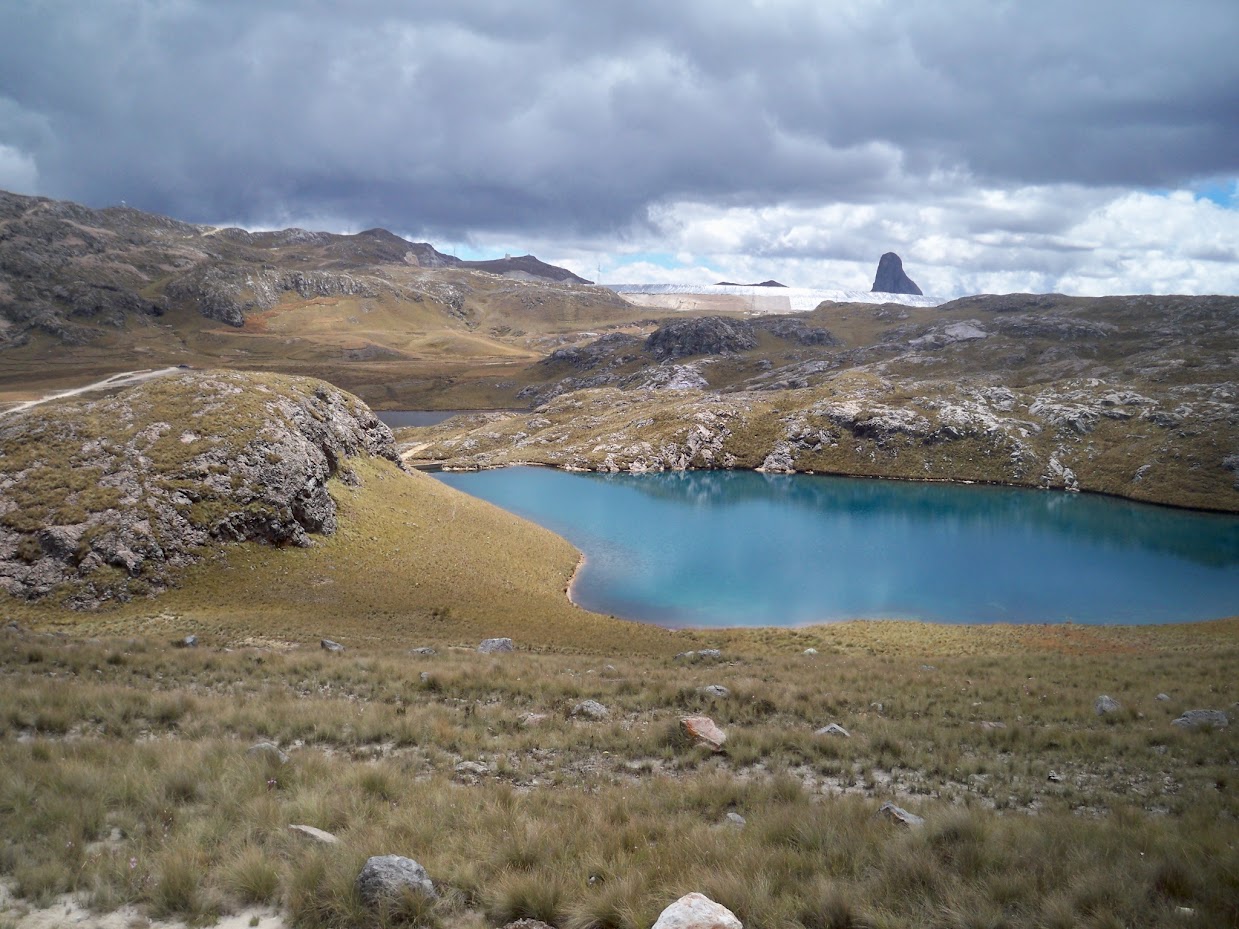 A few lakes existed amidst the boulders and windswept tufts of grass.

A downhill began, past one of the many mines in this area, before a short uphill into the settlement of Shorey.

I stopped off at the police station there, and the kind chaps they were, they drew me a map of a route to Huaraz. Bike touring navigation is all about flexibility and adaptability! 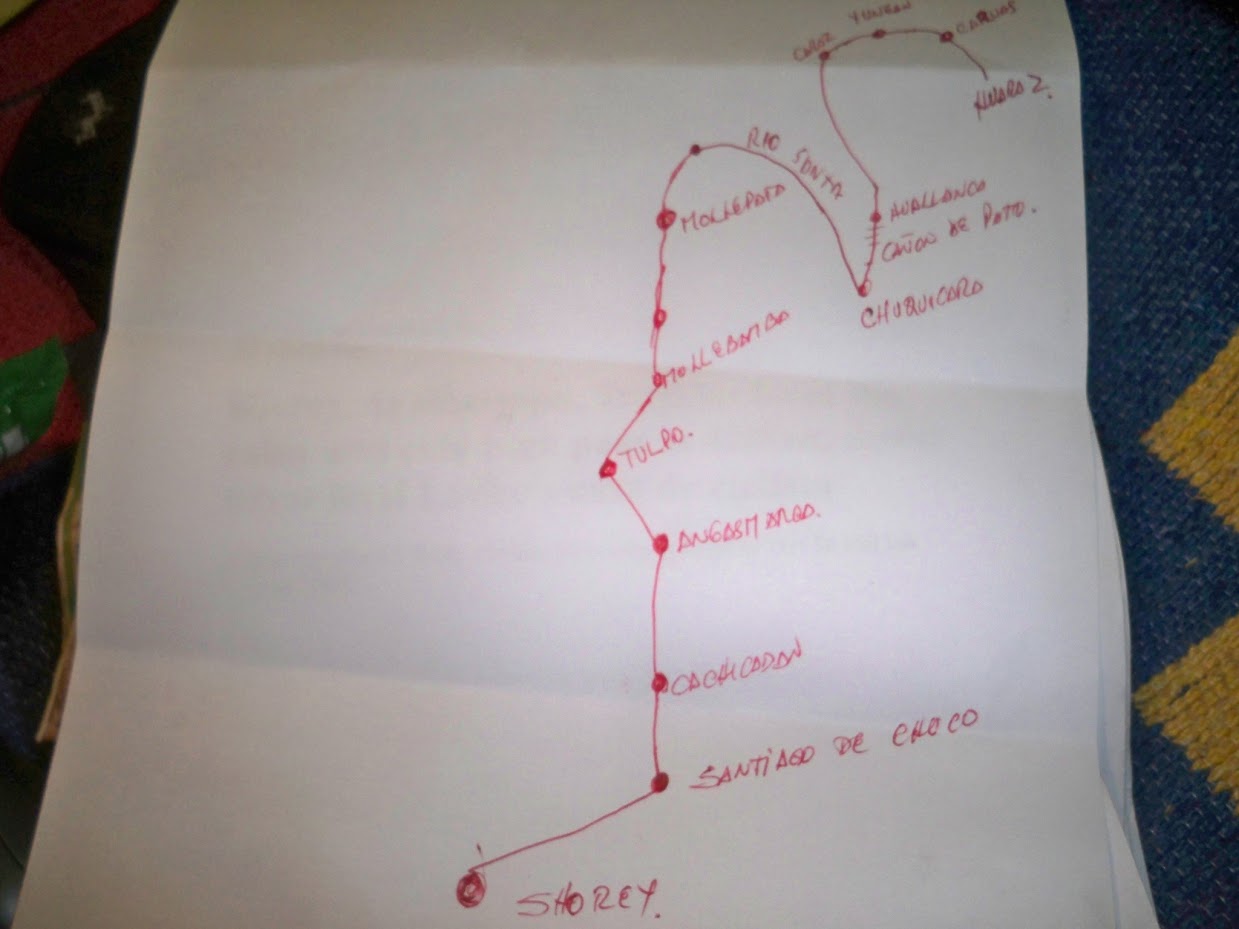 The route will actually go through many of the villages I had on my previous list, so by coming along the main road, I don’t think I lost much distance, and actually, it would have made for easier cycling.

As a bonus, the police guy described a road that follows the Rio Santa, which if it is there and accessible, means that I will cut out a huge ascent to the town of  Pallasca and subsequent descent back down to the river. I’ll see when I get there.

Home for the night was a simple room in a hospedje, whose usual clientele is mine workers. They also did a rather nice evening meal which was just the job after  1400 metre elevation gain day.

At night, I replaced all four brake pads. The heavy braking involved in cycling over the Andes is taking its toll on my wheel rims, and they are scarred and dished out. I hope they last until the end of the trip. Quite cold up here, as I am at the 3700 metre mark.