A tough day lay ahead when cycling between Lillooet and Cottonwood in Canada. Here's my blog entry from this day of the Pan-American Highway cycle tour.

I was mentally geared up for what I knew would be a tough days cycling. After stocking up on snacks for the road, I cycled out of Lillooet, and began an uphill stretch which only finished some 20 kms later. 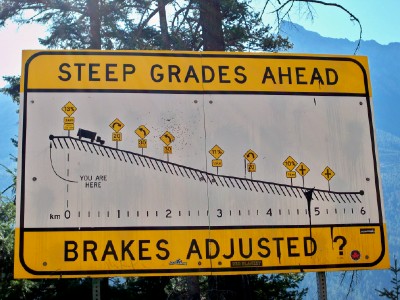 The above photo would have been good news if I was going downhill, however, that's what I had just cycled up. With 13 % angles of incline, some gravel sections, and a scorching hot sun, it was brutally tough work.

But do you know what? I really enjoyed it. With lots of thumbs up from passing motorists, amazing views, and a real sense of achievement, its why I love bicycle touring so much.

There just isn't another way to travel for me, and its what I was born to do. 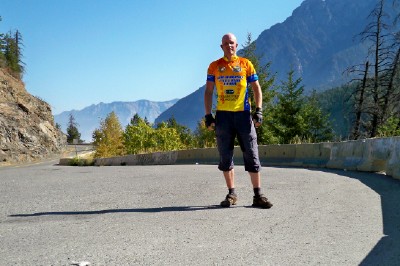 With the steepest sections owned, and a good elevation, I began to notice a series of free camping areas. Distance wise, of little over 30 kms done, it wasn't a spectacular day, but effort wise, it was some of the hardest work all trip.

I pulled into the Cottonwood free camping area, and a German couple who were just having lunch invited me over for a cup of tea. They had passed me earlier on, and had wanted to stop then, as they said that they always stopped for cyclists, but there had been nowhere safe for them to do so.

I was soon plied with tea, biscuits and cakes whilst we swapped stories. They are well travelled also, and ship their campervan from Germany to the countries they are going to travel through.

They had been to Argentina, and said that at Christmas and the end of the year, all the travellers who have made the Pan American crossing gather together for a party.

This has made me more determined than ever to complete my trip of cycling from Alaska to Argentina at the end of the year 2010 !

Use the links below to read more blog entries from this bike tour:

– Dave Briggs
Dave wrote this travel guide about Cycling from Lillooet to Cottonwood in Canada when bicycle touring from Alaska to Argentina.