On day 8 of my cycling trip from Alaska to Argentina, I cycled from my camp on the Elliot Highway to the settlement of Joy.

My knee was still aching in the morning, but after looking at my map, I figured I was only 20 miles short of yesterdays original goal of Joy.

I would also be passing a river, which was good news. I had enough water for oatmeal, a half litre to drink, and a further half litre to get me to the river. Time to get moving then!

Cycling to Joy Homestead in Alaska

The pedaling was hard, but I just had to grit my teeth and get on with it. I reverted back to pushing on the steeper climbs, which was marginally better for my knee than attempting to cycle.

I made the river with a couple of mouthfuls of water to spare, and filtered another 2 litres which was more than enough to get me to Joy, which was at mile fifty of the Elliot Highway. I highly recommend taking a water filter for bike touring!

I got there at about midday, and although it was only about twenty miles, it was more than enough for me. 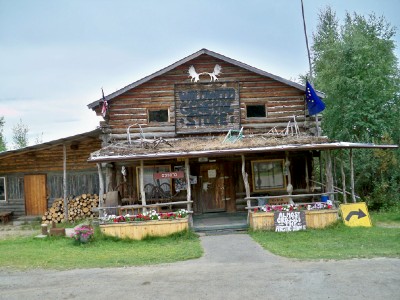 The Town of Joy

Joy is s strange little small holding/ settlement. The store is known as the Arctic Circle Trading Post, and after setting up camp by the duck pond, I investigated their supplies of muffins and other assorted goodies before heading back to the tent.

A nice 18 hours without cycling was just what the doctor ordered, so I entered into ‘relax' mode, especially, and this was the real bonus, there were no mosquitoes!!!

I had some time to spare, so I cleaned through some kit, trimmed my sprouting beard, scratched a few old mosquito bites and generally refuelled and hydrated.

I also got talking to one of the lads there. The conversation started something along the lines of ‘ Well, my granddaddy had 23 kids' etc etc. So instantly I was on to a winner.

Now, all the younger generation do look VERY similar. I thought about checking everyone's hands for extra digits or webbing, but it might have been considered rude.

The lad I spoke to had this excellent way of clicking his tongue at the end of every sentence, and his favourite word was ‘evidently'. Great stuff.

Use the links below to read more of the daily travel blog posts from this bicycle tour:

– Dave Briggs
Dave wrote this travel guide about cycling the Elliott Highway Alaska when cycle touring from Alaska to Argentina.